Unable to make the trip down to Stevenage? The Alex have you covered…

Crewe travel to Stevenage after an enforced two week break due to the 'Beast From The East'.

With last weekend's clash with Forest Green falling foul of the conditions, The Alex's last match was the impressive 4-1 victory at Lincoln City.

Dave Artell's troops are looking to make it back-to-back league wins in League Two for the first time since August, but in their way stand a Stevenage side who are decent on their own patch.

Boro have suffered just three defeats from 17 games in their backyard this season, but Crewe did win the reverse fixture 1-0 at Gresty Road - thanks to Jordan Bowery's last minute strike.

It's sure to be an interesting encounter at Broadhall Way and an afternoon that offers the Alex the chance to build momentum ahead of the run-in. 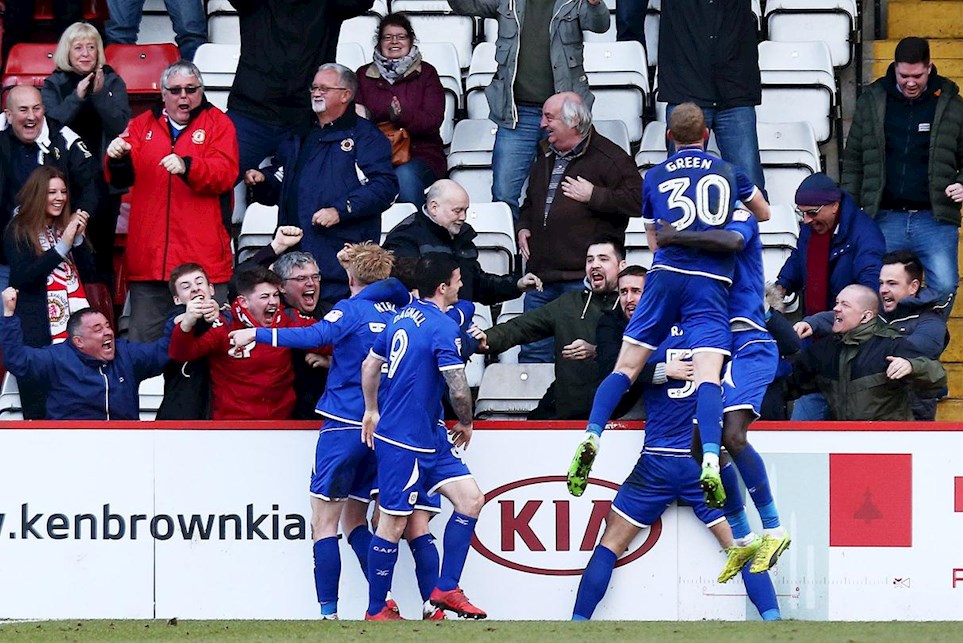 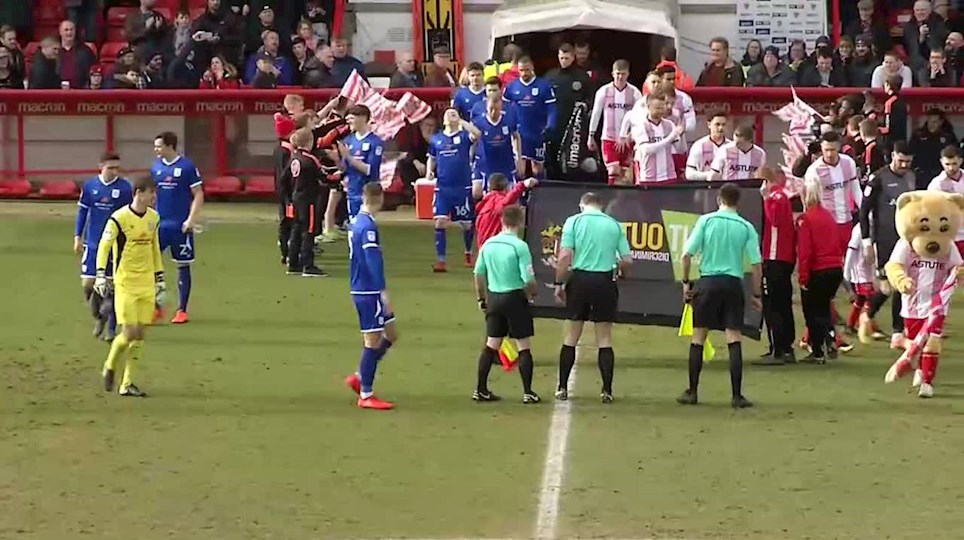 Alex substitute Charlie Kirk grabbed a dramatic equaliser in the 97th minute as Crewe Alexandra fought back from 2-0 down to grab a point this afternoon. Kirk stole in all alone to stoop low and head home a cross from Harry Pickering to send the Alex faithful in raptures behind that goal. It was no more that the Railwaymen deserved after fighting back late on thanks to a stunning strike from Perry Ng with 10 minutes left.

Dean Bowditch had given the home side a 2-0 goal advantage with two tidy finishes in each half. Crewe hadn’t deserved to be behind but kept plugging away to salvage a deserved point after the officials had awarded six minutes of injury time.

With Jamie Sterry struggling with a slight injury, the versatile Perry Ng switched back to right-back from midfield. That meant a recall for Tom Lowery in midfield alongside Paul Green and Harry Pickering.

Chris Dagnall returned to the squad after overcoming a knee injury. Daggers had not been involved since the narrow 1-0 defeat at Carlisle United in January.

Crewe applied some early pressure at the Lamex Stadium with Jordan Bowery and Paul Green winning corners on the right hand side. Stevenage defended well to deny George Ray a clear run at Tom King’s goal.

A confident Crewe continued to dominate much of the ball in the early exchanges but there were no genuine chances created for either team.

Therefore, it was hugely disappointing that Crewe would go on to concede after the home side’s first genuine attack. In the 14th minute, a wonderfully clipped pass from Johnny Goddard was inch perfect to drop over Ray’s head inside the penalty area and a deft touch from Dean Bowditch allowed him to take the ball down and dispatch it past Ben Garratt. It was a quality finish from the former Ipswich and MK Dons forward on what was his home debut for his new club.

Some good approach play from Lowery inside the Stevenage box eventually saw possession switched to left-back Zoumana Bakayogo, but he could only poke his shot harmlessly wide of the target.

More promising build-up play from the Railwaymen saw the ball worked into the feet of Bowery but after a tidy turn up his against his marker, he couldn’t direct his shot on target to test King.

On 33 minutes, Green hit a perfect crossfield pass into the path of Ng and he in turn found Lowery will a low cross. The midfielder was able to get his shot off but it took the slightest of deflections to take it past the far post and away for a Crewe corner.

A couple of minutes later, Crewe produced their best move of the half. Some swift and accurate passing saw us break from one end of the pitch to the other. On a tricky pitch, it was some move that ended with Lowery slipping Shaun Miller in for our first shot on target. The Alex striker did everything right but he was denied by a smart save from King.

Stevenage went close to a second goal with five minutes of the first half remaining, but after getting free at a free-kick, Ben Wilmot couldn’t direct his header on target.

Crewe continued to press looking for an equaliser before the half-time interval and after Bowery again raced into space down the right hand side, he created an opening for Green. Bowery rolled possession into the path of the experienced midfielder and he had adequate time to control it and try to curl it into far corner but he lifted his effort over King’s crossbar. Green was disappointed with himself after failing to hit the target from what was a good position.

In first half stoppage time, Danny Newton tried to catch Garratt out with a shot from long range. It must have moved in flight because the Crewe goalkeeper had to push the ball out rather than collect it.

Crewe would have been disappointed to have gone in at the interval trailing to Bowditch’s goal after having much of the ball.

An upbeat Crewe made a quick start to the second half. The tempo seemed to be raised and the pressurising was encouraging. An early half chance, so nearly saw Miller played through but King read the situation really well to advance from his line and clear the danger.

Moments later, a fantastic burst from Bakaygo saw him produce a really tempting low cross that needed a touch from a Stevenage defender to take it away from Bowery and Miller.

After another promising start to the second half, Crewe slipped further behind on 51 minutes. From the touchline Danny Newton showed great pace to decisive Ray and advance to the by-line and Bowditch had the simplest of tasks to tap home his second goal of the afternoon.

The second goal prompted a change from David Artell with Harry McKirdy replacing Lowery. McKirdy was given a good ovation after returning to the club he served well on loan last season. McKirdy’s first involvement saw him appeal loudly for a penalty after he appeared to be bundled over inside the box. The referee waved away his appeal.

Stevenage soon made a change of their own with Bowditch being replaced by Ben Kennedy. Bowditch had inflicted the damage with his two tidy finishes.

Crewe’s second substitution of the afternoon saw Charlie Kirk come on for Ainley.

Crewe needed a goal to get back into the contest and King came out to claim a Green free-kick ahead of Ray. The Alex captain was then booked for a poor challenge.

It should have been 3-0 after Stevenage got in behind the Alex again but Ray managed to smuggle it behind for corner as they queued up for a tap-in. Moments later, Newton couldn’t keep his shot down to test Garratt.

From a Pickering corner from the right, a powerful header from Nolan had to be cleared from the line and then from a corner from the other side, there was a strong appeal as Ray went down. The Crewe players were incensed that there had been an infringement.

With the game entering the later stages, Dagnall replaced Bowery.

The Alex were given a late lifeline with Perry Ng’s third goal and best goal of the season. There didn’t seem to be much on for the defender as he came through a 50/50 challenge close to the touchline but with everyone expecting him to cross it into a crowded penalty area but instead he unleashed an unstoppable shot into the top corner. It was a wonderful strike that gave Crewe a passage back into the game with ten minutes remaining.

Stevenage lost Mark McGee through injury and he was forced off. He was replaced by Jonathan Smith with the minutes ticking away.

Crewe had good possession in-and-around the Stevenage penalty area but the home side defended their box well and we just lacked that quality cross or pass to really test them again. But we kept plugging away.

With six minutes of stoppage time, Crewe threw the kitchen sink at it and King produced the save of the game to deny Shaun Miller, who must have thought he had scored when he headed a Green cross goalwards.

The Alex striker headed a Green cross towards the top corner but the Stevenage stopper did superbly well to claw it out.

That looked that but to their enormous credit, the Alex rallied again and in the 97th minute, Kirk was in so much space he just had to direct his header past a helpless King. It was tremendous scenes as Crewe gallantly fought back.

Crewe Alexandra travel to Stevenage for the first time since August 2016, having opened the 2016/17 campaign with a 2-1 win at Broadhall way.

Heading into crunch time at the tail end of the campaign, Dave Artell & his troops are desperate for wins - and you can help them achieve the goal by backing the boys at the Boro.

Tickets are cheaper if purchased in advance from Crewe, so pop in-store, call or book online via the shop website at www.thealexandrastore.co.uk.

Tickets will be on sale until 3:00pm on Friday 9 March, subject to availability.