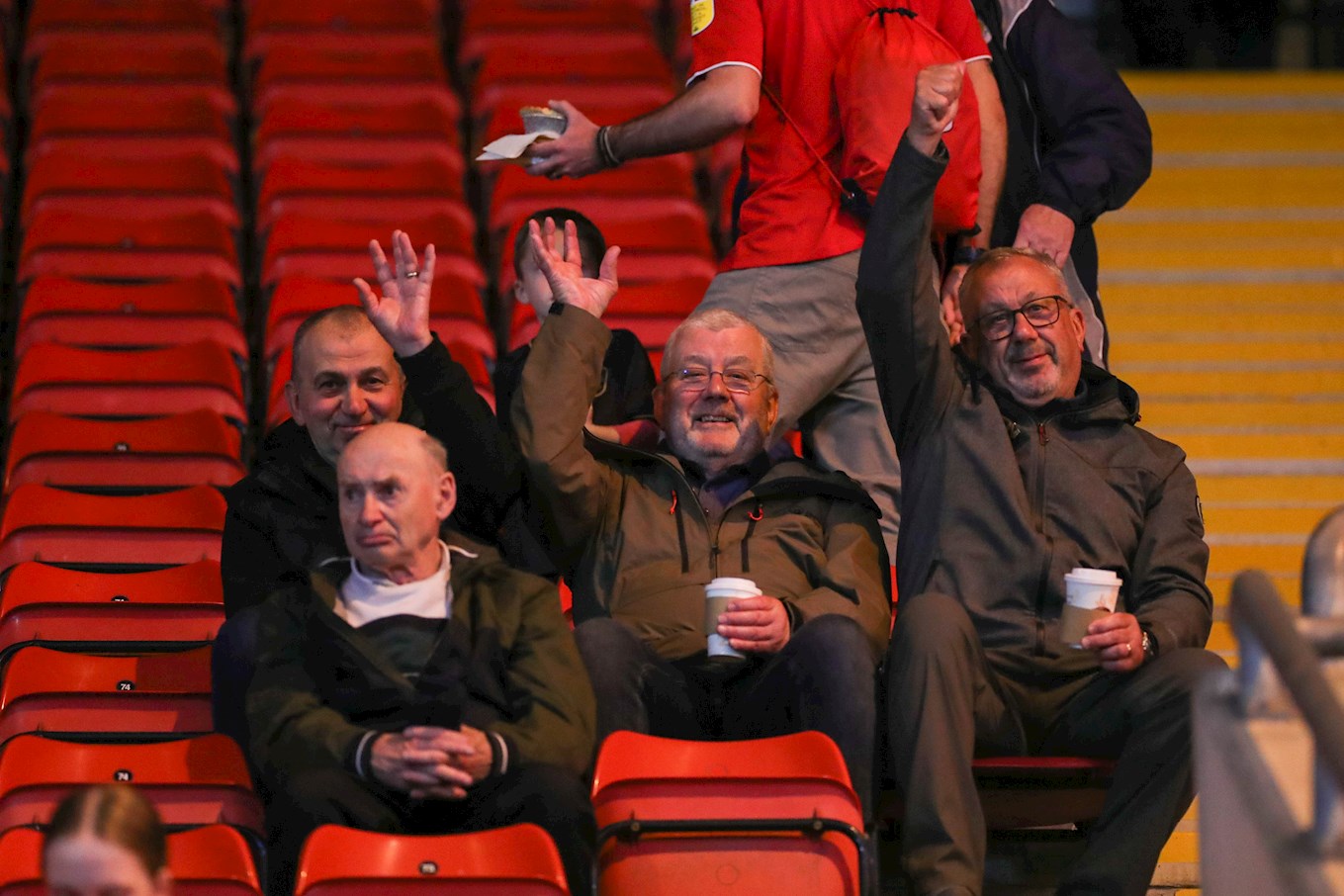 Formed in 1877, Crewe Alexandra is one of the oldest EFL clubs in Britain and has experienced many highs and lows during its history. 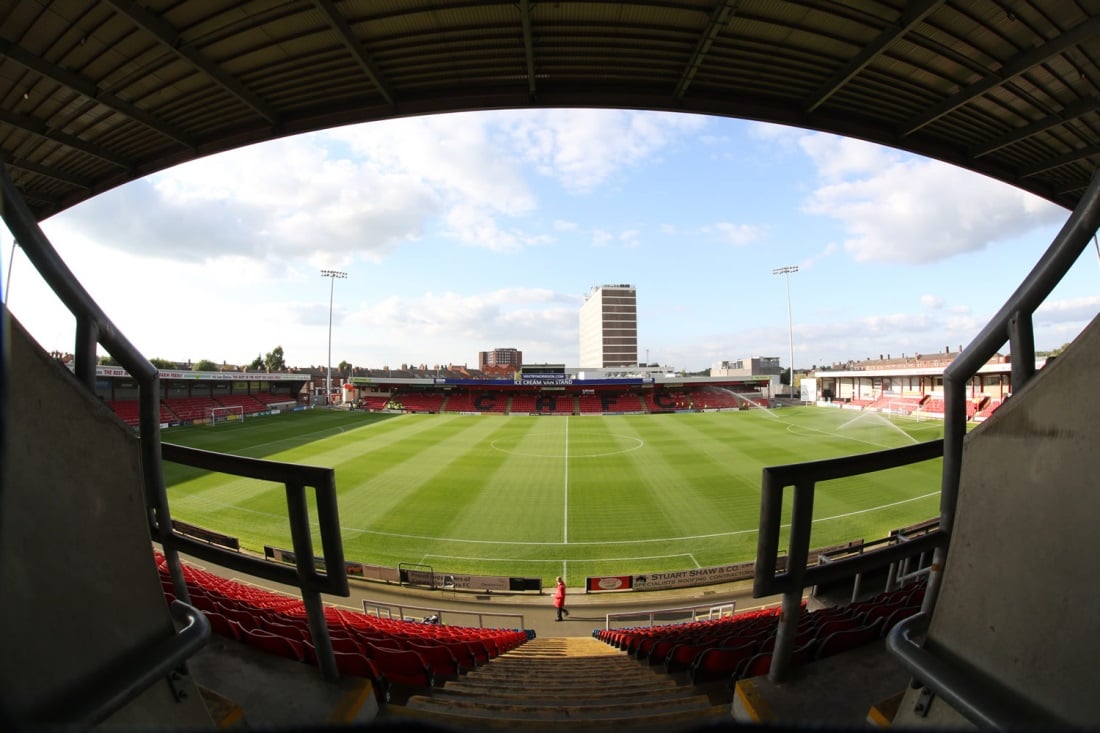 From the trauma of re-election to the high of promotion to the EFL Championship in 1997, Crewe Alexandra has an established and proud history as a club that often ‘punches above its weight’.

The Football Club has developed a well renowned youth Academy that has produced a number of full international players such as former England captain David Platt, Dean Ashton, Danny Murphy and Seth Johnson and generated over £25 million in transfer revenue.

Crewe Alexandra continues to nurture young talent and provide them with an opportunity to play first-team football. Our objective is to produce talented, skilful footballers, as well as disciplined and respectful men both on-and-off the pitch. The club is often awarded the PFA and FA Fair Play Awards for our excellent discipline.

Despite having to sell playing assets to survive, Crewe Alexandra reached the Championship for a period of eight seasons and always strives to play at the highest level possible.

The year 2012 saw the club promoted back to League One via the play-offs and a year later winning the Football League Trophy (Johnstone’s Paint Trophy) for the first time in the club’s history, while establishing ourselves in League One.

The Football Club was the first to win the EFL’s accolade of the best away fan experience and has proudly won the Family Excellence Award over the past six seasons.

Crewe Alexandra was honoured with the Football League’s Most Respected Club Award in 2005 – an accolade that takes pride of place at the Alexandra Stadium.

The club’s Soccer in the Community scheme is also award winning and holds sessions for children of all ages, as well for those with disabilities and learning difficulties.

In the forthcoming season, everyone at the Club is aiming to build on our relationships with the local community and enticing supporters of the future to local football.

We have increased our links with local charities and have chosen Mid Cheshire Hospitals and their tremendous work with dementia as one of our new charity partners for the coming season.

During these tough economic times, The Football Club is also keen to assist our supporters by offering real value for money in relation to ticketing and season tickets. We continue to offer some of the cheapest seats in the entire EFL, especially for our younger supporters. Our free season ticket offer for our Under-11s has once again proved very popular with families.

In October 2015 Crewe Alexandra was one of nine clubs successful in completing a ground-breaking pilot that sets standards for equality in professional football, meeting the Code of Practice foundation level, and setting the benchmark for others to follow.

The Football League’s Code of Practice was introduced as part of a commitment to English football’s Inclusion & Anti-Discrimination Action Plan which ensures clubs are inclusive across all sections of their business. This incorporates match day operations, general operations, community trust, youth development, fans and the first team.

The club successfully passed an independent assessment across 12 areas of operation ensuring good practice extends to all employees, spectators and other people engaged with the club.

The Code of Practice embeds inclusion and equality throughout the whole club, setting accountability at the highest level.

How To Buy Tickets

Supporters can purchase tickets to watch Crewe Alexandra FC in the following ways:

1) Online at www.eticketing.co.uk/crewealex where supporters have the delivery option of a digital ticket to add to their mobile e-wallet as well as the print at home option, which will generate an email with a 'print at home' ticket attached.

Matchdays 9am-kick-off and 30 minutes after the final whistle

On match days, the Match Day Ticket Office situated on the front of the Main Stand is open for home supporters
Saturdays (Non-Match days) Closed

Match Day Ticket Sales
Match Day (Saturday)
Tickets can be purchased using cash or card up until kick off.

Telephone bookings will only be taken prior to 2pm for that day's match.

Match Day (Mid-Week)
Tickets can be purchased using cash or card up until kick off.

Telephone bookings will only be taken prior to 6pm for that evening's match.

Sale Periods
Tickets for home league games are placed on sale eight weeks prior to the day of the fixture.

Crewe Alexandra has opened its very own Family Lounge on matchdays and has achieved considerable success in attracting local youth teams and schools to the Alexandra Stadium and has been awarded ‘The Football League Family Excellence Award’ for the sixth consecutive season.

The Lounge is situated behind the family stand on the first floor, with magnificent views of the pitch, it offers a warm and friendly welcome on a matchday, and families can either choose to take their seats in the family stand to watch the match, or stay inside or watch from the lounge itself.

Full refreshments and the match day programme are available to purchase in the Lounge with the additional refreshment counter below.

The Lounge is open from 2pm on Saturday matchdays and 6.30pm for Tuesday night fixtures, through to the end of the game, with live Sky/BT sports game and previous Crewe Alex games all being shown prior to kick off, and games and coloring for the children to take part with.

Gresty the Lion is our mascot and will always put in a special effort in matches for our junior supporters, he entertains our fans before and during half time, he loves having his photo taken and will even sign autographs if you are lucky!

Family match tickets for our Family Stand are priced at £20.00 for one adult and one Under 11.

Please make sure you tell the staff this is your first visit to the stadium and we will assist you in any way we can. 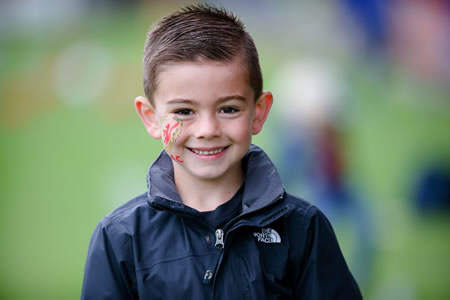 Getting To The Stadium

Crewe Alexandra have complied a comprehensive guide on how to get to the Alexandra Stadium to make sure you don’t have any problems getting here on match days. 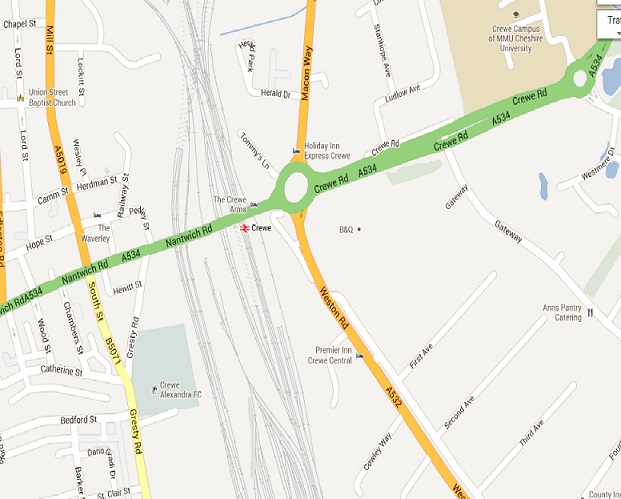 Crewe Alexandra is just a five minute walk from Crewe train station, with great links to the country it's easy to get here.

Once you arrive at the train station, (you can see the ground), turn left out of the main entrance and walk down Nantwich Road & turn down the second left onto Gresty Road. Then the ground is just a short walk further down this road.

Crewe Alexandra Football Club can best be accessed by using Junction 16 of the M6, from either the north or the south.

The postcode for your Sat Nav is CW2 6EB

There is a 564 space pay and display car park at the ground which is £3.50 to park, as well as limited street parking in the vicinity.

84 places in total. Home fans are seated in the East, West and South stands at pitch level,  we can also accommodate family groups.

Arrangements made as required. All positions covered with adjacent seating for carers. Hospital radio provides commentary.

Handsets and receivers 3 in home areas and 3 for the away end.

50 seats available for home and away supporters.

Arrangements made as required. Fans are seated at pitch level near the wheelchair area for easy access. All seating is covered and adjacent seating is provided for helpers.

14 adapted toilets with alarm cords in the concourse areas behind stands. Catering facilities are in close proximity with low level counters in the new stand. Steward assistance on request. 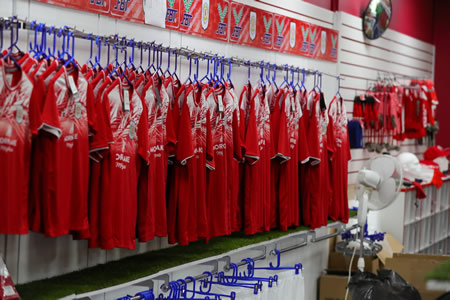 The Alexandra Store is situated on the corner of the main stand and remains open right up until kick-off and re-opens for 30 minutes at the end of the game.

It stocks a wide range of products including all home and away kits, a selection of FBT training wear and a variety of collectable souvenirs.

You can also order online for home delivery at www.thealexandrastore.co.uk

The Alexandra Store's opening hours are:

Matchdays: 9am–30mins after kick off 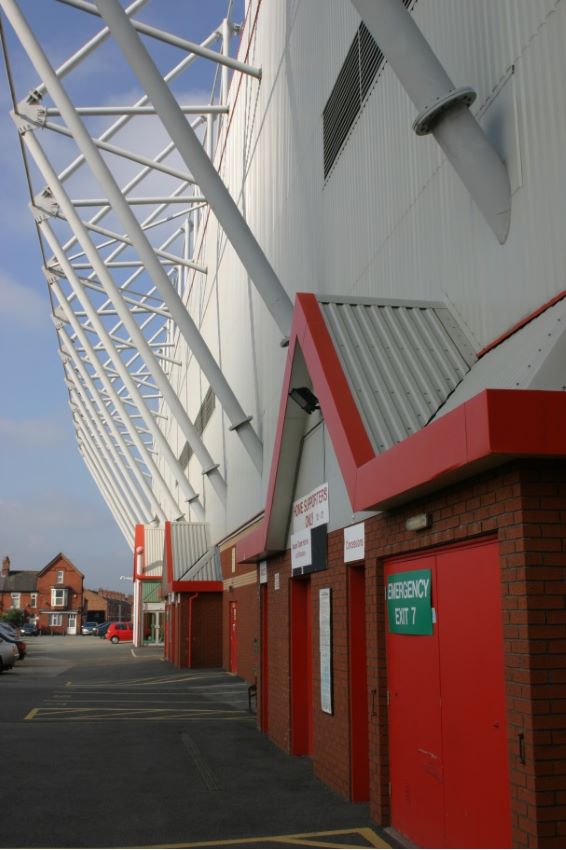 Please check the turnstile number on the front of the ticket you will need to use to gain entry into the stadium, there is a map on the back of the ticket for you to see where it is.

The turnstiles to enter the stadium open an hour before kick-off, but if you are unsure of where to go then please ask one of our helpful stewards outside the stadium that will be happy to point you in the right direction.

One inside the stadium please follow the signs to find your correct area, row, and seat for the match, we recommend you take your seats 30mins before the start of the game. 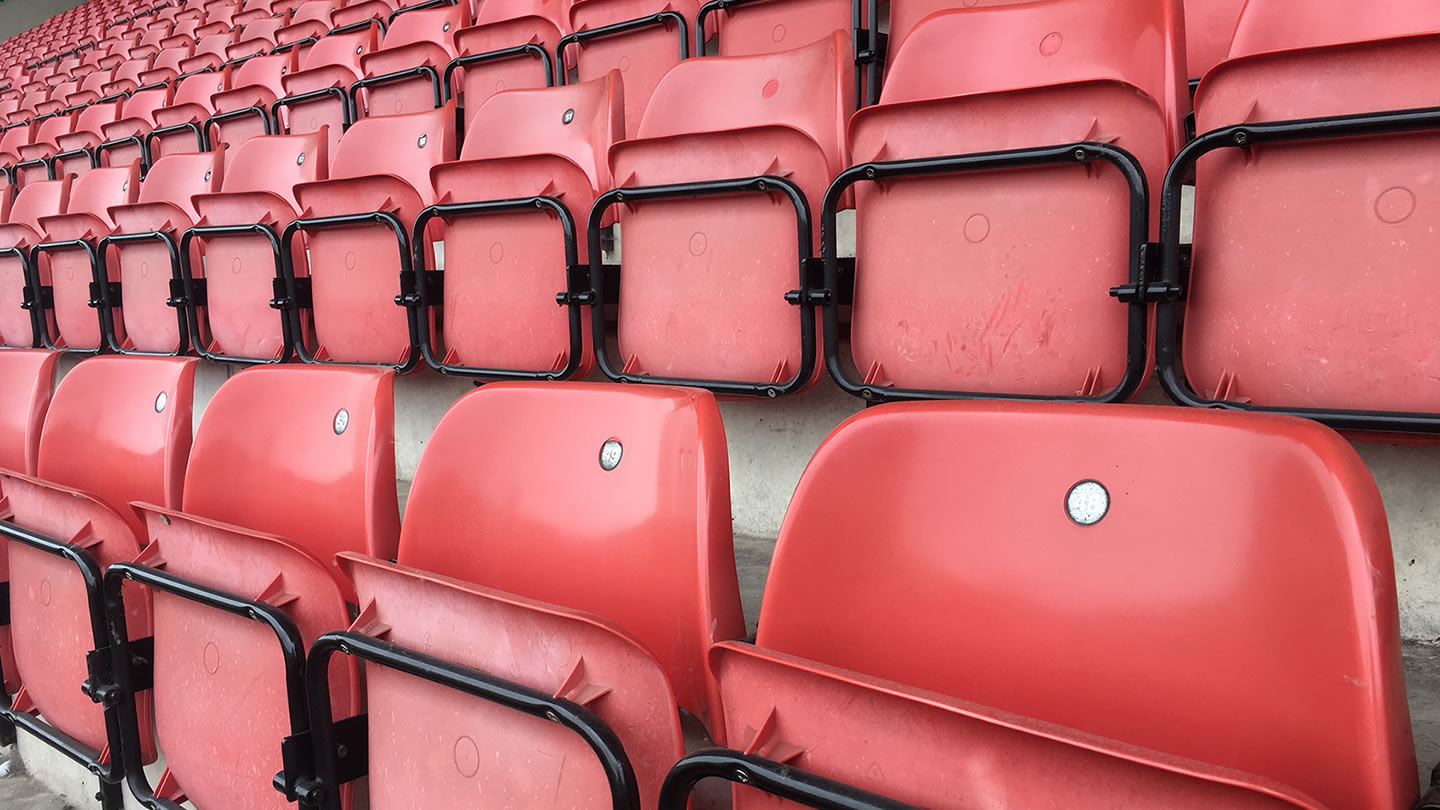 Refreshment kiosks are located in the concourse area in the main stand and there are outside kiosks for the other three stands, as well as a refreshment counter upstairs in our Family Lounge.

A wide range of items are available, including burgers,Wright's pies and hot dogs all priced at £4 as well as a range hot and cold drinks £2, and a selection of confectionary and crisps priced at 80p. Alcohol is also served on the concourse of the Main Stand, and for supporters in the Gresty Road Stand, the Alexandra Suite is open before and during half time. 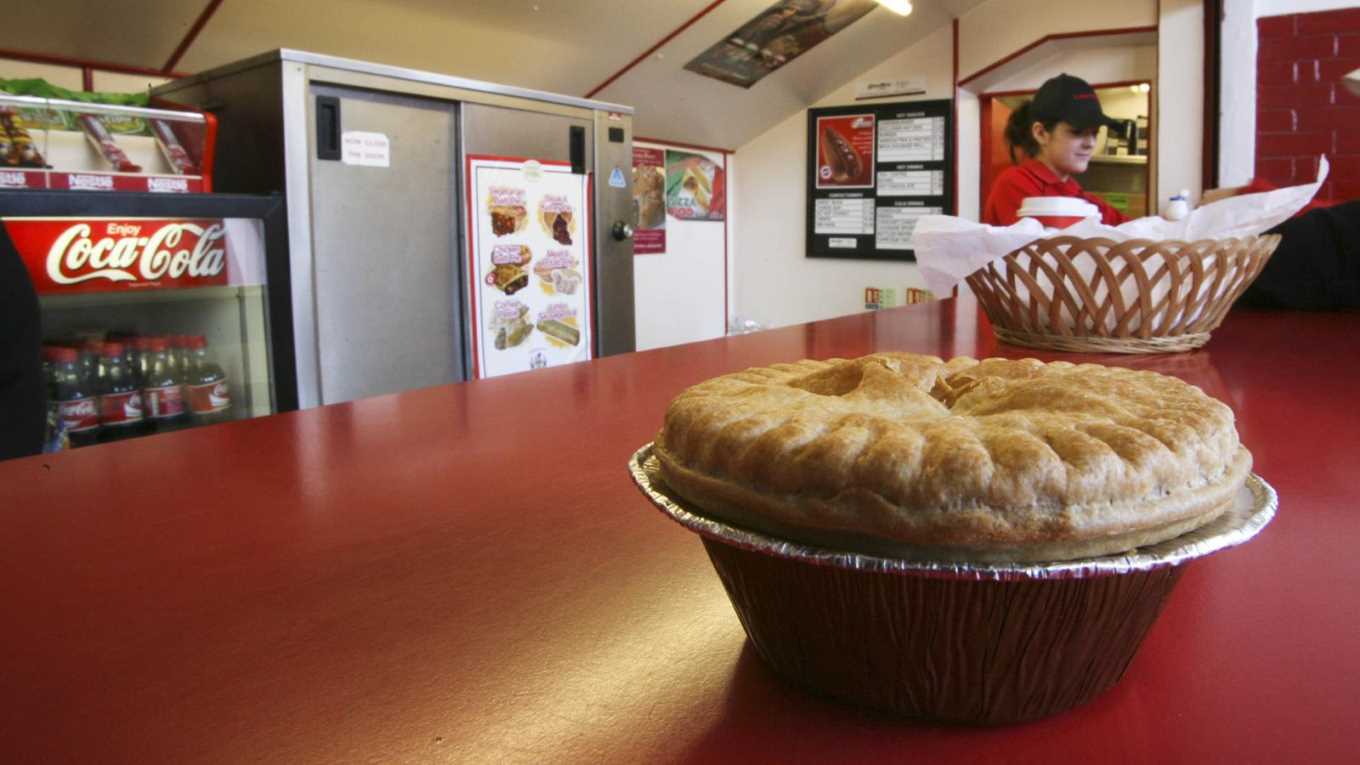 The Alex Suite can be found adjacent to the Whitby Morrison Stand, and opens from 12noon for Saturday fixtures and 5:30pm for evening games, showing live Football from BT and Sky Sports.

A selection of hot and cold food is also served inside, with vegetation options and pre-match alcoholic drinks available. The matchday programme is also available to purchase from behind the bar.

Both home & well-behaved visiting supporters are welcome pre-match in the Alexandra Suite.

At half-time, the bar is open for supporters in the Rhino Safety Stand (Gresty Road End) to use.

Gresty The Lion will make a matchday appearance at approximately 14:15 to visit supporters ahead of kick-off. 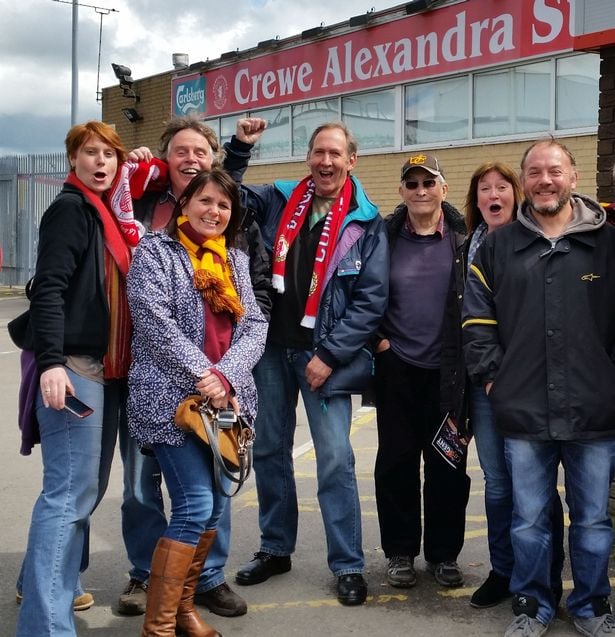 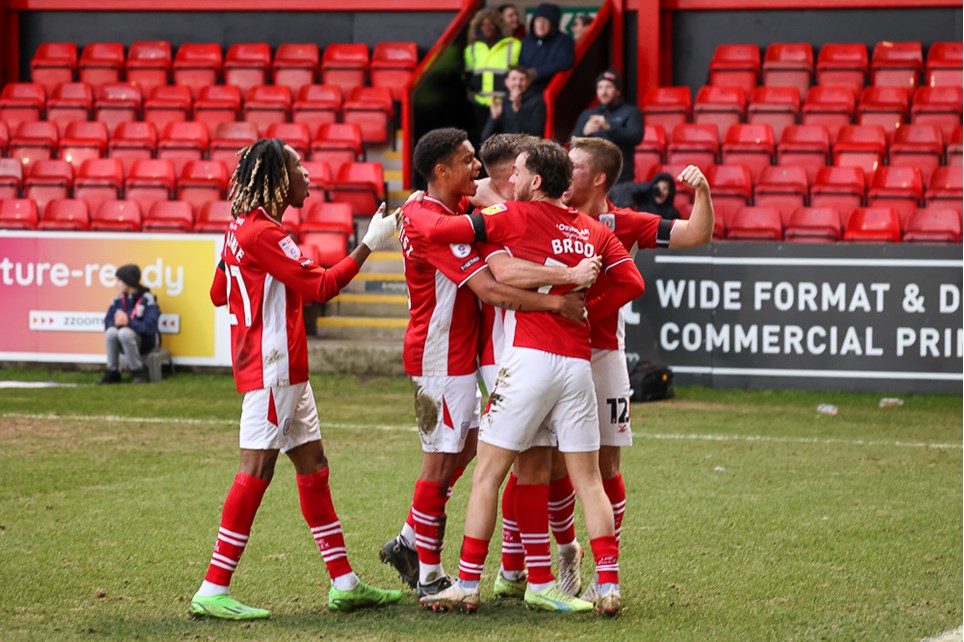 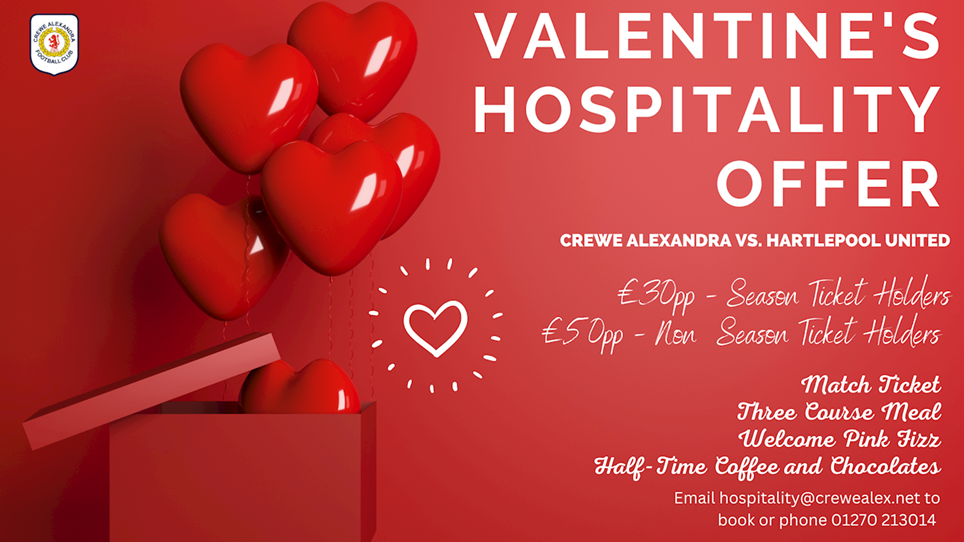 Enjoy Valentine’s with your true love at Crewe 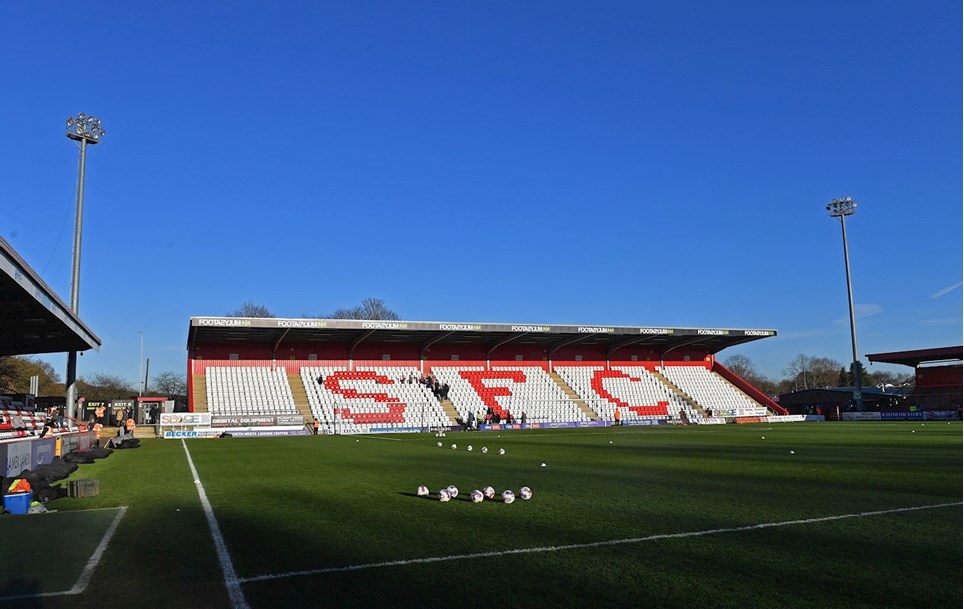