Crewe Alexandra are looking to continue the fine home form that has been the bedrock of the 2018/19 season when Newport County AFC come to town.

Eight of the 13 Sky Bet League Two matches played at the Alexandra Stadium have resulted in victory for Crewe, with two draws & just three losses.

Newport won the reverse fixture 1-0 at Rodney Parade in August in just the second game of the season - Paul Green missing a penalty that day as the Alex should've secured at least a point.

The last meeting at Gresty Road came in August 2017, Chris Dagnall equalsing in a 1-1 draw after Perry Ng had been sent off early doors.

Crewe: The Alex are still sweating over the fitness of defender Eddie Nolan who is now rated 50/50 for the game after missing the previous two with a calf strain.

The rest of the squad are expected to be fit, but boss Dave Artell could make changes to his side after an uninspiring performance at Morecambe last week.

The Alex won both home games over Christmas against Lincoln & Stevenage & will be glad to return to home soil after picking up one point from the last two on the road at Bury & Morecambe.

Newport: New Exiles loanee Vashon Neufville could be set to make his league debut for the Club having signed from West Ham just in time to play in the FA Cup against Leicester last weekend.

Tyreeq Bakinson has also extended his loan spell with County having enjoyed the first half of the campaign at Rodney Parade.

Crewe must be wary of Exiles strikers Jamille Matt & Padraig Amond who pose a strong goal-threat, Amond netting the winner in the 1-0 loss at Rodney Parade in August. 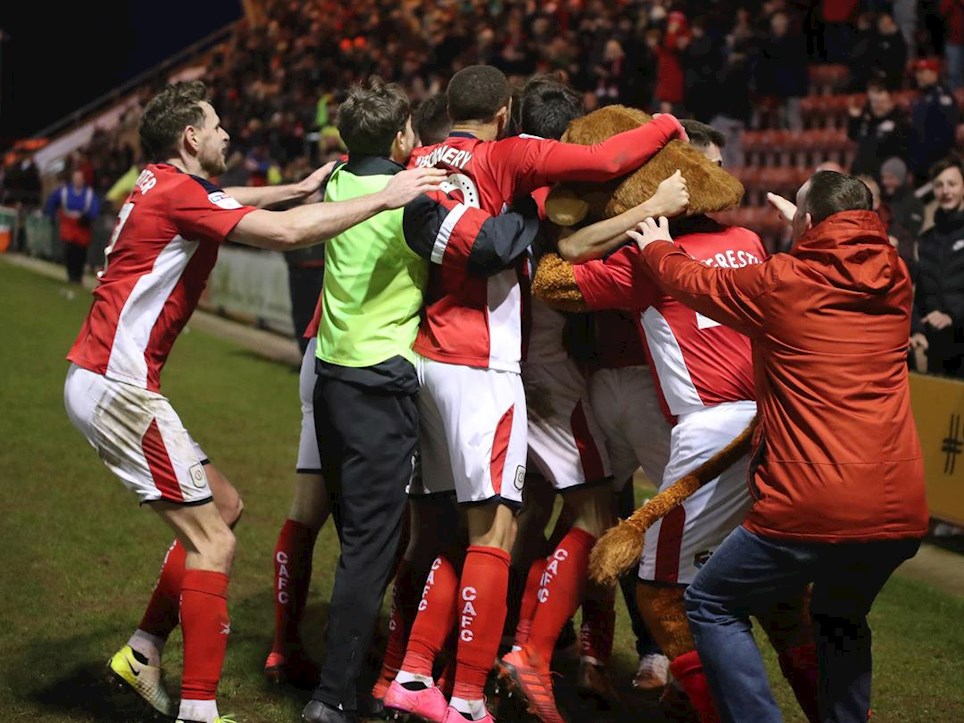 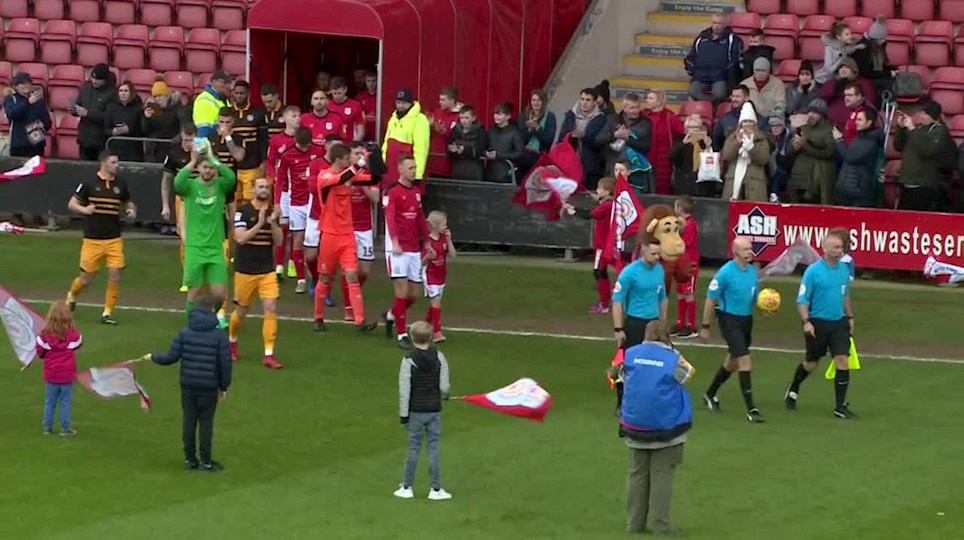 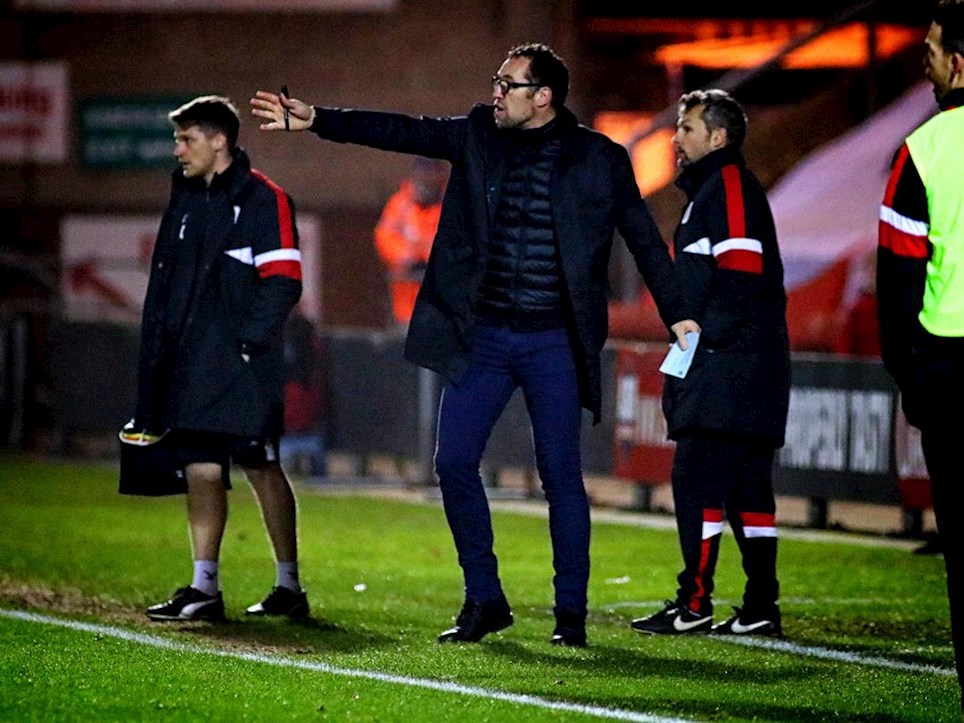 Artell: "We Showed Great Character And Throughly Deserved The Win"

Callum Ainley hit a dramatic injury time winner to stage a remarkable comeback against Newport County AFC. Crewe had trailed 2-1 heading into the final two minutes of the game but another cool penalty from Chris Porter set up a grandstand finish and following a quite incredible goalmouth scramble that saw Crewe smashing against the door about three or four times, Ainley swept home to send the Alexandra Stadium into raptures!

Crewe had led at the half time interval thanks to a tidy finish from Jordan Bowery and it should have been a greater margin but with just the one goal in it, Newport County responded to lead 2-1 thanks to finishes from winger Antoine Semenyo and FA Cup hero Antonie Semenyo.

But Crewe, who struggled to repeat their high level first half performance, kept going and in the final ten minutes managed to get back on top. Ainley’s super late winner climaxed a highly entertaining encounter at Gresty Road.

David Artell was forced into a change in his midfield engine room after Paul Green suffered a slight ankle injury in training. The injury should not keep out the influential midfielder for too long.

Eddie Nolan has not been ready to train during the week, so Nicky Hunt retained his place at centre-half alongside skipper George Ray.  There was a place on the substitutes’ bench for youngster Luke Offord in place of the injured Alex Nicholls. The striker suffered a quad injury in the Cheshire Senior Cup defeat to Nantwich Town on Wednesday evening.

Crewe Alexandra started really positively with Callum Ainley forcing an early corner and the home side continued to press forward looking to get a strong footing in the game.

There was a period of both teams trying to figure each other and that was hardly helped by a stoppage when George Ray took a bang in the mouth from Jamille Matt. Ray needed treatment after blood gushed from his mouth and rather confusingly he was adjudged to have fouled the Newport striker! Newport ‘s Robbie Willmott couldn’t make anything from the resultant free-kick as Garratt came to collect.

Crewe created a couple of shooting opportunities for Bowery and Wintle but they were too central to the Newport goalkeeper Joe Day. It was good football in the creation of the half chances though.

The game became a little scrappy but Crewe were certainly getting a lot of joy down the Newport left through the tenacious Ng and the quick footwork of Ainley, who was a constant threat.

At the other end of the pitch, the Crewe centre-halves, Ray and Hunt were keeping Amond and Matt pretty quiet. Amond’s only real chance in the first half saw him head a Dan Butler cross onto the top of the Crewe netting. Ray also made a flying diving header to clear another cross coming in from the left.

The visitors only other chance of the first period saw the impressive Ng make a fantastic block to deny Antoine Semenyo’s shot on target.

A wicked cross from James Jones was swept to the far post and at a stretch Porter could only sent it over the crossbar.

Crewe deservedly took the lead on 34 minutes and it was another fine move to unlock a stubborn Newport defence. Ng was again involved to find Porter on the edge of the Newport box and he swiftly found Bowery in space to his left. The forward took a deft touch to take him away from a grounded defender and he drilled his shot under Day for the opener. It was a wonderful finish to register his seventh goal of the season and his first in the league since Yeovil away in October.

Bowery continued to be a menace, eager to run in behind and he headed a Kirk cross straight at Day as we went in search of a second goal before the break.

Another flowing move saw Ainley and Ng combine and find James Jones and after he spun quickly, his shot was a yard wide of the left hand post.

The biggest chance of us going in at the break with a two goal advantage fell to the in-form Porter in stoppage time. Day seemed to hesitate after Porter was played in by Jones but the Alex striker fired into the legs of the Newport goalkeeper.  Crewe deserved to be heading in 1-0 up and with a bit of luck it really could have been two or three.

As you would expect, Newport upped their performance in the second half. Flynn’s side did the ugly side of the game really well and made things more difficult with the help of the wind. The conditions played its part and the Welsh side used their physicality.

James Jones hit an early pass to find Kirk but he was smothered out of a clear shot at goal by two covering defenders. Ng also glided past two defenders before his low shot was saved by Day.

Flynn made his first change with Tyreeq Bakinson replacing Dolan early on and they were soon annoyed with the official after the referee failed to play advantage with Matt clean through on goal. It was a let off for Crewe.

Newport continued to break the game up with some fouls and they turned it into a battle second half. A wicked cross from Amond missed everyone and he also couldn’t connect cleanly with a dropping ball inside the box.

A flying header from Ray was pushed away by a diving Day before Newport hit back. It was a poor goal to concede with Crewe failing to deal with a long throw-in and after it carried right across our box, the opposite winger Semenyo buried it.

The game swung into the visitors favour and Bakinson had a firm shot blocked by Hunt.

Kirk got one out of his feet and hit a superb 25 yards that needed to be pushed over again by Day. From the resultant corner, Newport so nearly scored on the counter attack! It was a rapid break and with Crewe outnumbered, Hunt did brilliantly to get a goalbound effort off the line by the covering Hunt. He did exceptionally well but Crewe were holding on a bit.

Matt was booked for catching Garratt with a trailing foot and Semenyo also for barging Ng into the advertising hoarding.

Newport took the lead on 76 and again it was a dreadful goal to concede. A long ball saw Garratt challenge Matt in the air and Ng made a mess of his clearance, looping back into a crowded penalty area and after it bounced twice, Amond reacted first to turn it home.

Artell quickly made a change with Owen Dale replacing Kirk and the youngster again made a positive impact. Finney also replaced the injured Hunt.

Crewe really gave it a real go in the closing ten minutes and we got out just reward with Dale winning a free-kick close to the by-line. The ball was swung in by Jones and Fraser Franks pulled Ray over for another late chance from the penalty spot. For the second week running, Porter kept his cool to covert his fifth goal in five games.

To their enormous credit, the Alex continued to press and after an unbelievable scramble, which saw Dale, Porter and Finney all have a go at it, and Dale complain about a handball, the ball ws played back intelligently from Bowery to Ainley and he showed great composure to seal an unforgettable 3-2 win and protect our excellent home record.

Artell: "We Showed Great Character And Throughly Deserved The Win"

The Alex picked up seven points from a possible 12 during that period & now return to home soil - where six of those points came from.

The match takes place on Saturday 12 January at the Alexandra Stadium with a 3pm kick-off.

Crewe are currently 16th in League Two & have an eye on catching up with County - a victory moving the Railwaymen up to within a point of the Exiles.