Unable to make it to Cheltenham this weekend? The Alex have you covered…

Crewe travel to Cheltenham looking to build back-to-back unbeaten away games in all competitions.

The 1-0 victory at Morecambe & 3-3 draw in the FA Cup at Blackburn represented a huge turnaround in form on the road, & boss Dave Artell will be hoping that it continues in Gloucestershire this weekend.

The Robins proved a tough nut to crack last season, with Crewe failing to win any of the four meetings. Cheltenham won the league game 2-0 at Whaddon Road, before a 0-0 stalemate in the reverse fixture at Gresty Road.

In between came an FA Cup First Round tie & subsequent replay, with the Robins winning 4-1 after the initial tie was drawn 1-1.

Artell says his squad are in confident mood following the fight-back at Ewood Park last weekend, & he's confident of a positive result in a vital game.

The best way to take in the game is obviously in person at the stadium (tickets available at Cheltenham, click here for more info) but if you can't make it, then take in the information below for different ways to follow the action! 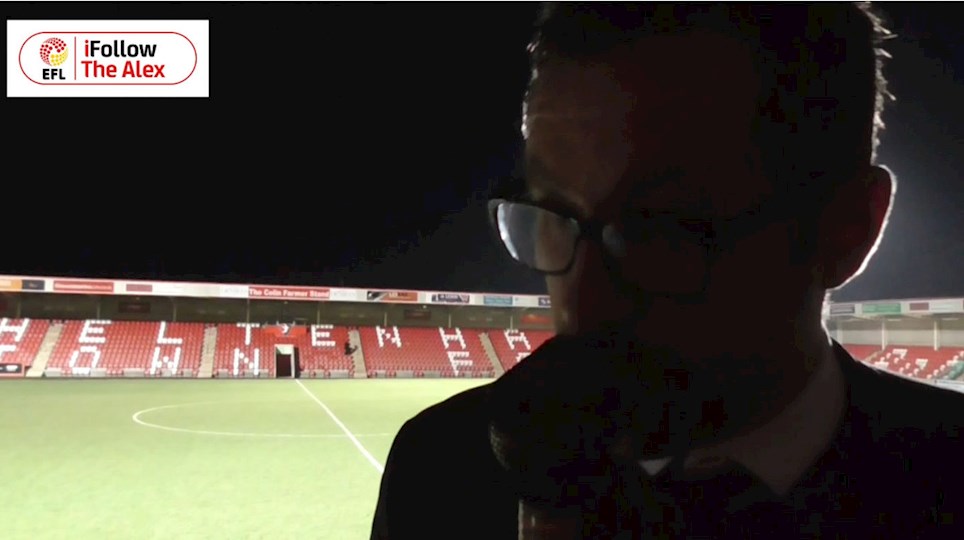 Crewe Alexandra couldn’t build on a recent run of two away games without defeat as they were beaten 1-0 at Cheltenham this afternoon. The only goal of a tight game came seven minutes into the second period with defender Jamie Grimes taking a chance on a long ball into our box and his tidy finish past Ben Garratt proved to be the winner.

Crewe huffed and puffed and had a strong argument for a first half penalty after Tom Lowery appeared to have been caught by the Cheltenham goalkeeper Scott Flinders close to the by-line. That proved to be Crewe’s best passage of play in the 90 minutes with Flinders forced into a double save to deny first Chris Porter and then George Cooper.

The Railwaymen were also a little unfortunate not to force a late chance home after Chris Porter, captain Chris Dagnall and then George Cooper were also denied in a scramble inside the box. It just wouldn't go in and even a rare headed chance from Tom Lowery was cleared ahead of Dagnall having an empty goal to go for deep into stoppage time.

Ben Garratt returned in goal for Crewe Alexandra ending Dave Richards’ run of 13 consecutive games. David Artell made two other changes with a fit-again Michael Raynes returning to the starting line-up after he overcame his groin injury. Eddie Nolan also returned to the starting line-up after coming on as a substitute and scoring in the 3-3 draw with his former club Blackburn Rovers in the FA Cup.

The unlucky ones to drop out of the starting XI were midfielder Callum Ainley and centre-half Sam Stubbs. With Nolan and Raynes back as a central defensive partnership, Brad Walker moved back into central midfield.

Gary Johnson named an unchanged side as the Robins aimed to extend their unbeaten run to four games in the league.  The home side lined-up in a one-off blue shirt to raise awareness and funds for the British Lung Foundation, meaning Crewe wore their home kit for the game at Whaddon Road.

Cheltenham’s Jerell Sellars provided Garratt with an early test on his return to the starting line-up but his low drive from almost 25 yards was well held by the Crewe goalkeeper.

Moments later, Mohamed Eisa flicked a Kevin Dawson cross just wide of the near post. Danny Wright was also presented with an early opportunity, but his shot on the turn was deflected high over Garratt’ crossbar.

After Cheltenham’s fast start, Crewe needed ten minutes or so to settle into the game but with Raynes back at the heart of our defence we were coping adequately with the crosses entering our box. Both Raynes and Nolan produced superbly timed headers to prevent chances for the towering Wright.

A promising move from the Railwaymen in the 21st minute resulted in Walker’s having an ambitious shot from around 30 yards, but he dragged it wide of Scott Flinders’ goal. Almost immediately, Cheltenham broke up the other end of the pitch and Garratt had to save from Joe Morrell, who had set himself on the edge of the Crewe penalty area.

Crewe were finding it difficult to mount any attacks of any serious note but we continued to try and find the targets of Bowery and Porter and have Cooper and Dagnall working off them. At times, it was too long and too direct and we invited pressure onto us.

Then on 35 minutes, the Alex played some much more inventive football. Young Lowery was instrumental in the build-up and he released Porter perfectly inside the box and his side footed effort was saved by the legs of Flinders.

With the ball still alive, Bowery then found Cooper and his low drive was superbly saved by the fingertips of Flinders. Lowery spying his chance raced onto the loose ball and drew a contact with Flinders close to the by-line. The Crewe dugout certainly had grounds for a penalty appeal but referee Dean Whitehouse waved away the protests. If it wasn’t a penalty then surely it should have been a corner for a start? We didn’t even get the corner.

Garratt on his return to the team produced his best save of the first half to deny the impressive Sellars and Raynes completed the clearance.

On 42 minutes, a powerful break from full-back Perry Ng saw him force a rather awkward save out of Flinders. The Cheltenham goalkeeper was rather lucky after he made a mess of holding onto his low drive, but he managed to just about get enough on it to scramble it away. Ng was soon afterwards, the first player to enter the referee’s notebook.

Crewe had to stand firm in the closing stages, as Cheltenham continued to load our penalty area but Nolan and Raynes heading most of the danger clear.

Cheltenham carved out an early half chance at the beginning of the second half. Wright found his lively strike partner Eisa but his shot across goal didn’t trouble Garratt.

The Robins scored the opening goal of the game on 52 minutes after a long, hopeful ball played into our box deflected off the back of Raynes and fell invitingly into the path of Jamie Grimes. He raced onto the loose ball unchecked and he drilled his shot through the legs of Garratt.

In response, Porter did well to tee up Dagnall and his fierce drive was blocked by William Boyle before it could reach Flinders.

Walker joined Ng in the book for catching Sellars after he cleverly flicked the ball round him and Carl Winchester was spoken to after his overreaction to the challenge. Walker was soon withdrawn for Bakayogo. Pickering moved into centre midfield.

More skilful play from Eisa, saw him drift off the touchline and shoot straight at Garratt. With 25 minutes remaining, Bowery was replaced by Ainley, as Crewe looked for some inspiration to get back into the game. His first involvement nearly saw him release Lowery into the Cheltenham box but his final pass was intercepted by Boyle.

Crewe began to have some concerted pressure with Dagnall and Ainley making a nuisance of themselves inside the Cheltenham box but we couldn’t carve out that genuine chance.

With the minutes ticking away, Crewe continued to press and look for that equaliser. Cheltenham were content to hold onto what they had but Wright had two chances blocked.

On 85 minutes, Crewe were gifted possession in the final third of the pitch and Lowery quickly fed Porter but he couldn’t quite bundle his way in and Flinders reacted well to smother the ball at his feet.

In the final minute, Ainley, who had to his credit injected some zest to our attack blazed over the top. There was still time for Crewe to pile forward and all three of Porter, Dagnall and Cooper were denied in a late melee. Ng also tried his luck from distance but his low shot was well held by Flinders.

Cheltenham had to survive a late free-kick entering their box deep into stoppage time and Lowery's back header had to be cleared after Flinders had come and made a mess of it.

Crewe Alexandra travel to Cheltenham Town looking to make it back-to-back away victories in Sky Bet League Two following the victory at Morecambe, having previously been on an eight-match losing streak.

The Alex faced The Robins on four occassions last season, losing at Whaddon Road in the league and drawing 0-0 at home, also drawing 1-1 away in the FA Cup First Round before losing the replay 4-1 at Gresty Road.

Official coaches depart from Gresty Road at 10:15am and are priced at: