Alex Morris' Crewe Alexandra Under 23 side take on Burnley this afternoon on the first team pitch at the Alexandra Stadium.

Kick off is 1pm, entry is free for all supporters & the lower Main Stand tea bar will be open.

Charlie Kirk, Sam Stubbs, Lewis Reilly & Harry Pickering are all set to feature, so why not come down & enjoy some free football.

The fixture is set to be the last U23 game played at the stadium this calendar year, with the next Professional Development League 2 game at Gresty Road set for March 2018.

All home games in the interim are played as usual at the Reaseheath training complex. 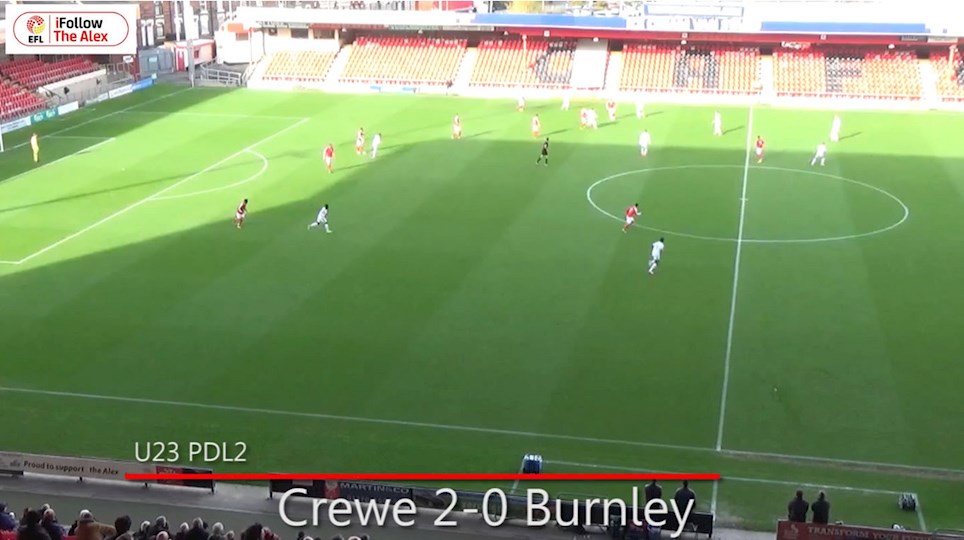 Kenny Lunt took the team in the absence of Alex Morris & saw his starlets record a victory & a clean sheet thanks to a goal either side of half-time from Alex Hurst & Lewis Reilly.

Dale had the first opportunity of the game on six-minutes, thrashing his early shot wide from outside the box after being set free from Harry Pickering’s diagonal.

In a cagey opening period, it was a magical Alex flowing move that broke the deadlock on 20 minutes. After a number of passes & attacking movement, Dale was set down the right before crossing deep to the back post for an unmarked Hurst to chest down & rifle a shot in at the near post.

Burnley had a chance to level on the half hour mark when a mistake from Sam Stubbs allowed striker Jamie Thomas a strike on goal, but he didn’t catch it properly & Ben Garratt made the comfortable save.

Clarets goalkeeper Aiden Stone almost gifted Crewe a second on the hour, palming Dale’s long distance shot straight to sub Luke Walsh who had to adjust his body to make contact but couldn’t direct the reactionary effort into the net.

But a sloppy backpass from Alex sub Rio Abibisi almost allowed Burnley to level on 71 minutes, but Garratt stood up firm to block the dinked shot.

Dwight McNeil planted a header just over the top from a corner in the 74th minute, before Crewe went straight up the other end as Kirk took down a long diagonal with a lovely touch & arrowed finish that Stone saved superbly to his left.

Crewe continued to battle to hold the lead & made the game safe four minutes from time through Reilly. Dale out-battled Harry Flowers in the corner & forced the miss-placed pass to Pickering who in turn fed Reilly to swivel & shoot from 20-yards. The striker slipped when taking his shot but the ball zipped into the bottom corner to cap off victory.