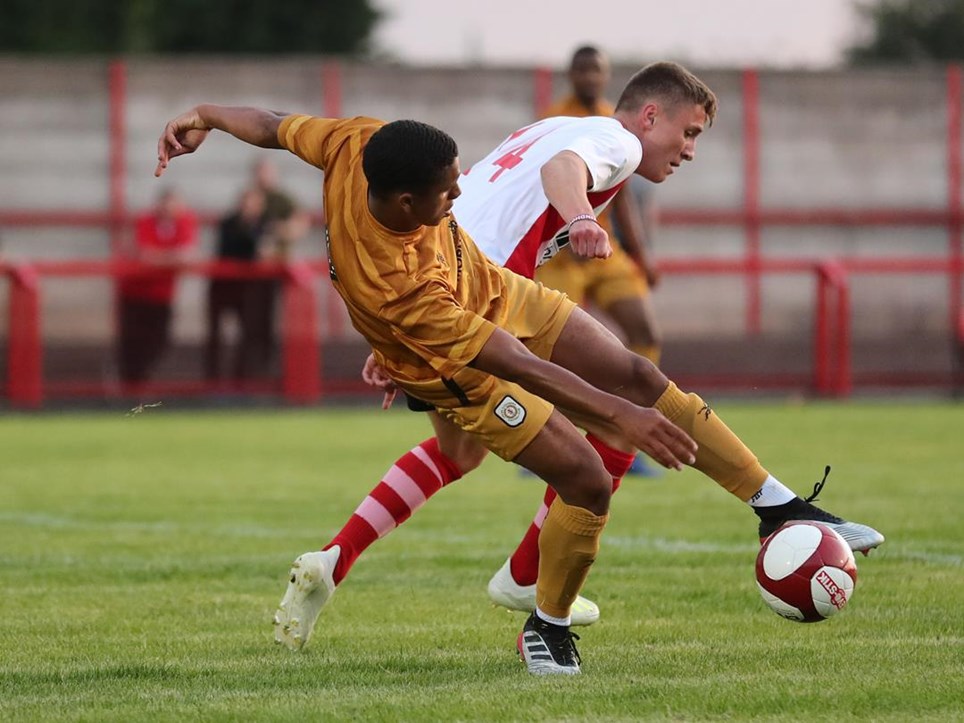 Daniel Powell returned from a slight back injury to hit a brace at Witton Albion. Shaun Miller added a third after a terrific run from sub Travis Johnson, as Crewe won 3-0.

Striker Powell, 28, had been struggling with a sore back and missed the weekend victory at Altrincham but he has been able to train with no discomfort and made his second appearance of the pre-season.

After a delayed start, Crewe made a slow start to the game and were rather fortunate not to go a goal down in the opening few minutes. Firstly, a period of pressure inside the penalty area ended with Will Jones hitting one of his own players with his close range effort and the follow up was sliced uncomfortably wide. Crewe managed to smuggle it away.

Then just moments later, Witton’s young trials forward raced cleared after a defensive slip from Billy Sass-Davies and although he was pursued by the retracing Finney, the lanky forward pulled his shot just wide of the far post.

After those early scares, Crewe began to impose themselves more on the game. The passes began to be sharper and Finney soon flicked a header wide of the target after good work from Powell and a cross from Ainley.

A confident Ainley then saw a driven shot deflected wide for a corner. From a short routine, the ball was worked into left-left-back Rio Adebisi and his firm shot smacked the post and had to be cleared close to the line. It was a fine effort from the Alex youngster and probably deserved more.

You could soon be saying the same from a Witton point of view though when their right back headed straight at Dave Richards from close range. If he had planted it to the side of the Welshman we would have been behind. It was clear that Witton were offering more of a test in the final third than Altrincham ever did on Saturday.

It was the Railwaymen taking the lead though with Powell heading home his second goal of pre-season after the ball was worked out on the left hand side by Adebisi and Ainley. Powell gave the trials goalkeeper no chance with his accurate near post finish.

Crewe continued to press aiming for another  and Regan Griffiths, who was playing in those pockets behind Miller, shot straight down the throat of the Witton goalkeeper.

There was a change at half time with Travis Johnson coming on at right back and Lundstram switching into midfield.

Crewe’s best move of the second period saw the midfield combine superbly well in unison with Jones and Lundstram saw the ball moved into Ainley and his powerful shot had to be saved at the second attempt.

The Railwaymen doubled the lead soon after with Jones’ accurate pass into Powell and he found Powell who conjured enough space for himself before unleashing a powerful shot from just inside the penalty area to make it 2-0.

Taking no risks with Powell he was withdrawn soon afterwards with young Owen Dale given his chance.

Crewe were tight at the back with Richards with little to do and we always looked the more likely to add to the tally.

That third goal duly arrived with 12 minutes left, and substitute Travis Johnson played a massive part in its creation. The right-back showed terrific pace to burst into the Witton box and he had the composure to roll it perfectly across for Miller to net from close range.

Crewe kept pressing looking for more and Finney was denied another pre-season goal by a late save and Lundstram was unlucky to see his header strike the crossbar.

Take your pick with Big Dave set to split his squad

Crewe Alexandra are set to split the first team squad right down the middle for friendlies at Witton Albion & Curzon Ashton tonight.

The Alex boss is set to send evenly matched sides to Wincham Park & the Tameside Stadium as he looks to get a full 90 minutes of pre-season match fitness into the legs of his squad.

For those travelling to Curzon Ashton (OL7 9HG), it's pay on the turnstiles with tickets priced at £10 adults, £5 concessions & £3 for students & free for under 16s.

So far in pre-season, The Alex have won 6-0 at Altrincham & lost 2-1 at Nantwich Town amongst some tough fitness work at Reaseheath & Delamere Forest.

*Proof of full time study must be provided

Click below to watch all the goals from Altrincham