Crewe Alexandra are looking to keep the momentum rolling heading into the brand new 2019/20 season, having ended the last campaign as the form side in Sky Bet League Two.

Also boasting more home wins (15/23) than any other side in the division last term, Dave & the boys are focused on keeping Gresty Road as a fortress.

But a tough test in the form of league newcomers Plymouth Argyle awaits on the opening day. They were relegated from League One on the final day on the 2018/19 campaign & have had a major overhaul this summer.

Amongst the pre-season favourites for promotion, Argyle have appointed Ryan Lowe as their new manager, having guided Bury to promotion from this division last season.

Unlike Plymouth, Crewe haven't had an overhaul this summer, favouring consistency with just two new signings walking through the door so far.

One thing's for sure, it's going to be one hell of a ride this season - make sure you're on it!

Crewe: The Alex will be without two centre halves for the opening day of the season. New signing Olly Lancashire picked up a problem early in pre-season, with Nicky Hunt being stretchered off in the final pre-season contest at Wrexham last weekend.

Daniel Powell is in contention to make his debut after joining from Northampton Town in the summer, and the wait will be over to find out whether Will Jaaskelainen or Dave Richards gets the nod to start the season in goal after Ben Garratt moved on.

Plymouth: Under new manager Ryan Lowe, Argyle have brought in FIVE players from Bury this summer all of whom played under Lowe in last season's Shakers promotion campaign.

Danny Mayor, signed from Bury in the summer, was arguably one of the best players in League Two last season & must be watched carefully. 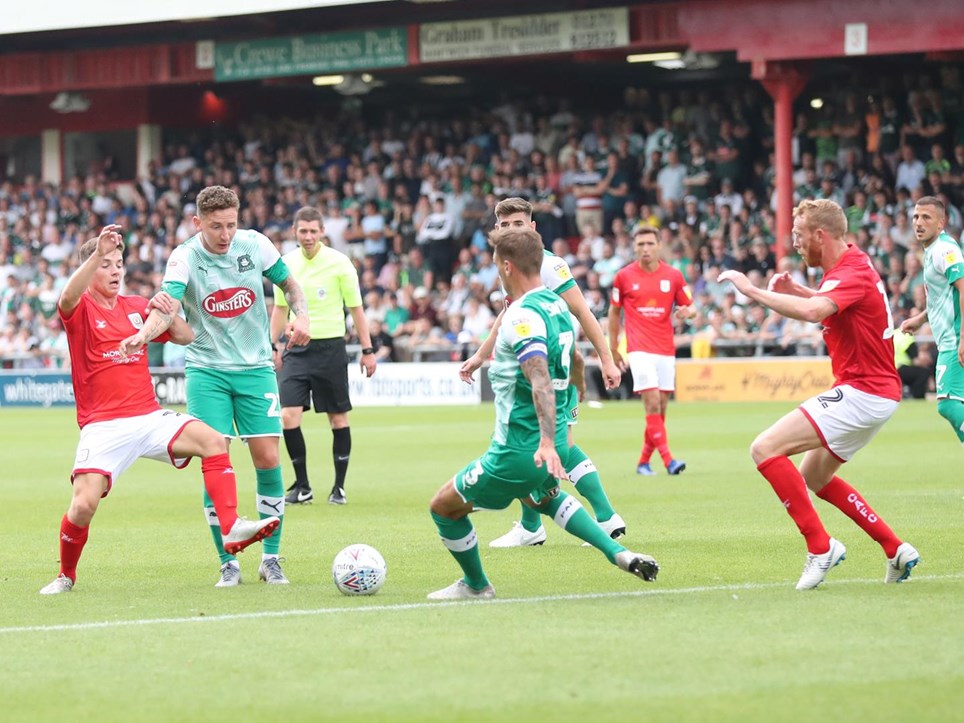 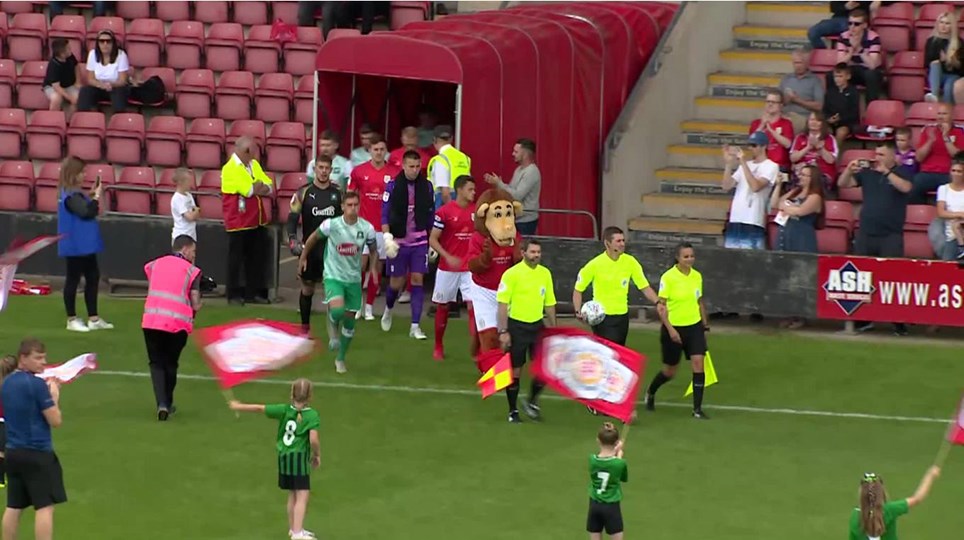 McFazdean scores a brace as Pilgrims inflict a home defeat on the Alex.

Crewe Alexandra lost their first opening day game in five years as promotion favourites Plymouth Argyle ran out 3-0 winners at the Alexandra Stadium. Ryan Lowe’s Pilgrims were clinical when their chances came about with left wing-back Callum McFadzean scoring twice and our former winger Joel Grant firing home a volley for the other.

In fairness to the Alex it was one of those games where we couldn’t find a way past an inspired Alex Palmer in the Plymouth goal and 3-0 was rather flattering to the visitors. He made a fantastic double save to deny Chris Porter and then Charlie Kirk.

He also made a stunning save to deny Paul Green’s header when he was grounded on the floor. Those crucial saves kept Crewe out and Plymouth with the advantage.

Crewe also felt aggrieved not to have been awarded a penalty after Eddie Nolan was fouled when trying to get onto a knockdown from Porter. It just wasn’t our afternoon because we actually played some really good stuff and continued to press in the second half trying to get that goal that would make all the difference to the contest.

With defenders Olly Lancashire and Nicky Hunt ruled out with slight injury, boss David Artell announced that Ryan Wintle would have a switch of position. Not for the first time, the versatile Wintle, started at centre-half with David Artell naming Paul Green, James Jones and Tom Lowery in midfield for the opener.

New summer signing Daniel Powell made his debut alongside Chris Porter and Charlie Kirk in attack.

Plymouth Argyle, managed by our former player Ryan Lowe named three of our former players in his starting line-up. Byron Moore, Joel Grant and Antoni Sarcevic all started for the Pilgrims. Our former loanee midfielder Conor Grant began on the substitutes’ bench.

After a rather cagey start, Plymouth Argyle took an early lead after four minutes but only after Crewe failed to clear the initial danger caused by our former winger Moore. He hit the dead ball line and crossed passed everyone to find Joe Reilly at the far post. His shot was blocked and Crewe had two chances to clear their lines but in failing to do so, the ball was kept alive and Callum McFadzean acrobatically finished past Will Jaaskelainen. It was a great finish to give Plymouth an early advantage.

The early set-back spurred Crewe into life and we began to get a foothold on the possession. Daniel Powell was our best outlet on the right hand wide and he twice fired over low crosses and also caused the Plymouth goalkeeper Gary Sawyer to deflect his clearance over his own crossbar.

With Crewe pressing forward looking for an equaliser, Pickering had a shot blocked after being found by Tom Lowery.

Moore was a thorn in our side and he found the overlapping McFazdean in behind Ng and his low cross had to cleared by a well-placed Wintle. Wintle also made a fantastically timed interception to deny Grant a clear run at our goal. He did get one shot off though after turning way from Pickering on the edge of the box but Jaaskelainen did really well to get down and hold onto with boots flying in.

It was end to end stuff and entertaining stuff for the opening fixture. Nolan was booked for a foul on Joel Grant as he skipped away and Edwards was also cautioned for catching Lowery in the side of his face with a trailing arm.

Danger man Danny Mayor skipped past Ng close to the touchline and his low shot had to superbly turned around the post by the foot of the Alex goalkeeper. It was a fine save from the young Finn.

Crewe’s best chance duly arrived after a fine break down the run hand side by Green. His low pull back was perfect, first for Porter and then by Kirk in the follow-up. Alex Palmer, the on loan goalkeeper from West Brom made two fantastic blocks to keep us out. It would be a pivotal moment in the game, as the Pilgrims went up the other end soon after to score another.

On 27 minutes, the ball was worked into Grant from a throw-in and after a defletion ran into his path, the former Crewe man picked his spot with a well struck shot from 22 yards out. The accuracy defeated Jaaskelainen and Crewe were somehow 2-0 down.

Crewe kept going trying to find a goal before the break. Ng fired a low shot into Palmer’s grip that he just about collected before Powell applied a touch.

Another half chance late on saw Pickering deliver a fine cross from the left and Porter flicked it goalwards and Palmer had to push it behind for a corner.

Crewe Alexandra came out and controlled the second period and continued to be on the front foot. Artell made his first change fairly early on with Callum Ainley replacing Jones.

The Railwaymen felt that we should have a penalty to get back into the contest with Porter heading down for Nolan and he appeared to be fouled by Wootoon as he threatened to pull the trigger from the centre of the goal.

The busy Palmer in the Plymouth goal was called into action to deny Ainley and the second phase of play saw Kirk find Porter in the six yard box but the tap in was ruled off for offside.

The Alex crowd raised the noise and Crewe kept pressing. Our fitness levels kept us going to the death and we just needed to find a way past Palmer to create a grandstand finish.

He made a stunning save to deny Green who must have thought he had scored when his close range header was directed goalwards. He couldn’t believe he was there again to save it.

Green was replaced by Finney as Crewe went for broke. Nothing really dropped for us inside the box and when it did Palmer was in inspired form. Pickering went extremely close with a well struck free-kick and Powell drilled a cross over that had to be tipped over.

Kirk continued to run at the Plymouth defence and he poked a low shot at Palmer.

Lowe introduced the height of Taylor and passing ability of Conor Grant and they saw the dying minutes out really well. They defended well in a second half that we had controlled possession wise.

On the break, Plymouth launched a stunning counter-attack and Mayor fed McFazdean into the Crewe box and his powerful drive flashed past Jaaskelainen for a stoppage time third goal for the visitors. The result flattered the Pilgrims but that it was what it was on the day.

Home supporters can purchase from us in advance

Former Alex player Ryan Lowe will take charge of Argyle for the first time, having been named their new manager during the close season.

The Pilgrims were relegated from League One last season on a topsy-turvy final day, with several changes occurring at Home Park over the summer months.