Crewe Alexandra and Mansfield Town lock horns at Gresty Road in the re-arranged match-up after September's orginal clash was postponed due to international call-ups.

There are no further games in League Two this evening, with Crewe able to move up from 17th to 11th with a win, and the Stags able to move from 11th to 9th if they come out on top.

The game in hand presents both sides with an opportunity to gain an added boost in League Two.

The Alex have won three of the last six & are four unbeaten, whilst Mansfield have only lost once in the league all season - but they have drawn nine of their 14 games.

Crewe: Perry Ng is in contention to return after serving his one-game suspension on Saturday, but Nicky Hunt could keep his place after helping to keep a clean sheet on Saturday.

Eddie Nolan could also come into the reckoning having recovered from injury.

Oli Finney scored two fantastic goals for the Under 23s on Monday & is also pushing for more first team game-time.

Crewe could move up SIX places and into 11th with a win, with no other League Two matches taking place tonight.

Midfielder Alex MacDonald and defender David Mirfin will miss the match as they continue their recoveries from knee injuries. The game will also come too soon for wing-back Hayden White.

Defender Ryan Sweeney is suspended for the match after picking up his fifth booking of the season against MK Dons.

The Stags, who are currently 11th in the league, can move up to 9th with a victory.

Live Video/Audio: The match IS available on iFollow for live streaming in the UK. (Click here to buy a match pass) 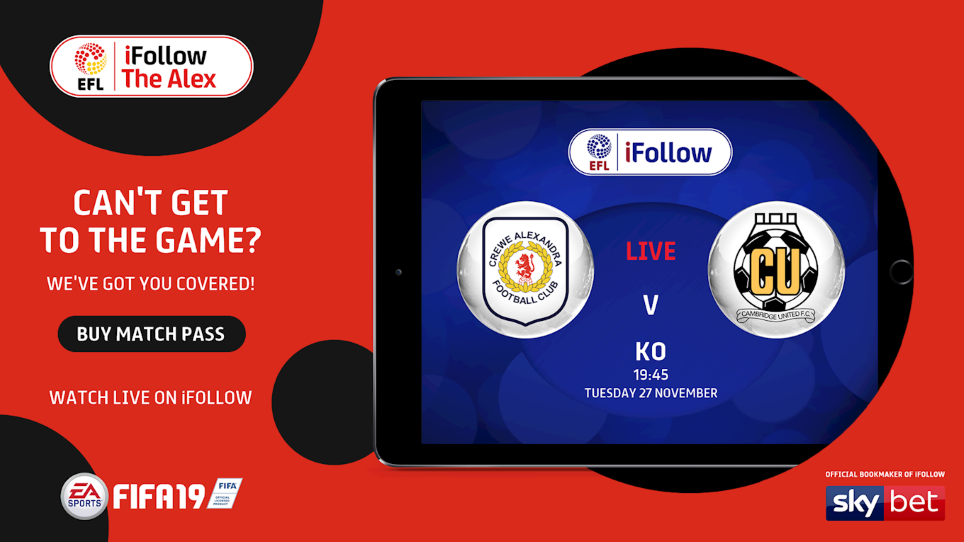 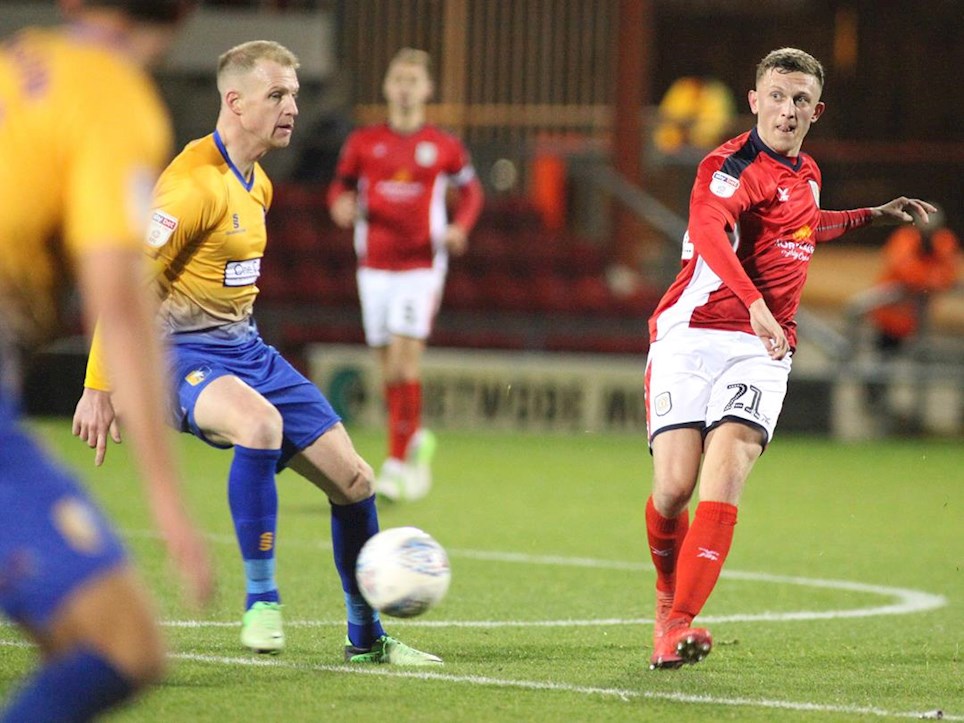 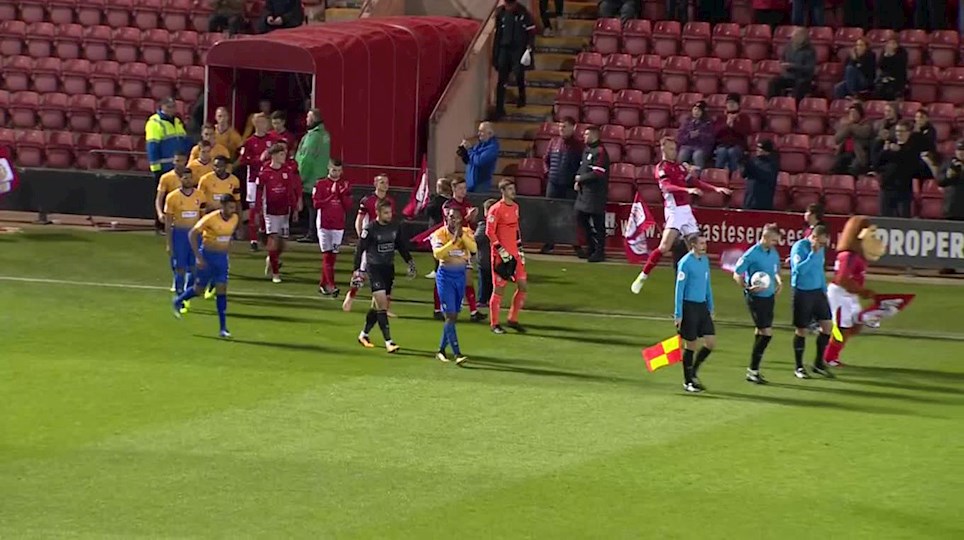 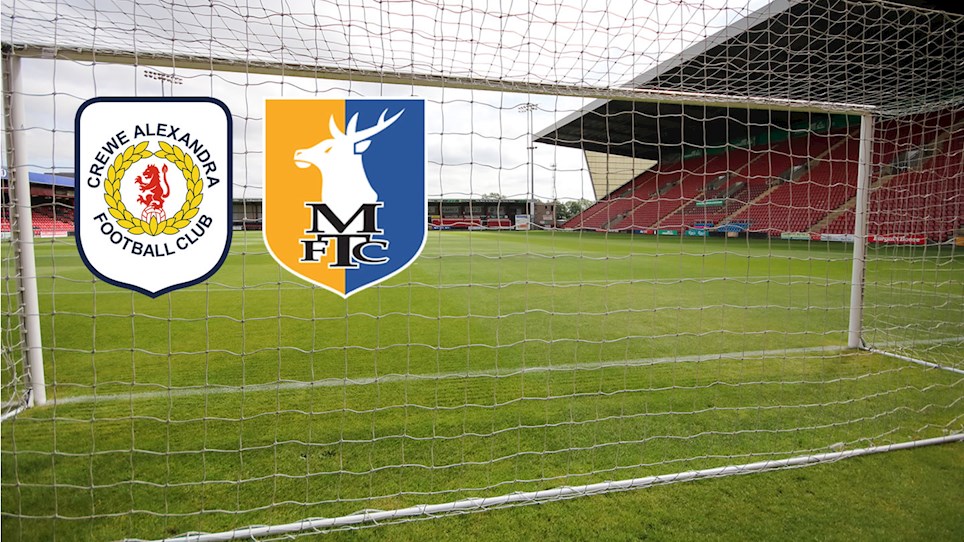 An impressive Mansfield Town side inflicted only Crewe Alexandra’s second home defeat of the season with a 3-0 win at Gresty Road. The actual scoreline probably does not tell the entire story of the overall game with Crewe having good chances of their own – none more so than Shaun Miller with the score at 1-0 to the visitors at the time.

Crewe also had chances in the second half with Callum Ainley disappointed not to have at least scored his first goal of the season and defender George Ray forcing Bobby Olejnik into a decent save with a firm header from a corner.

The Alex will be disappointed with the goals conceded, when allowing midfielder Timi Elsnik to ghost into positions to score a well-taken brace before Tyler Walker helped himself to a simple tap-in after wing-back CJ Hamilton showed incredible pace to beat Corey Whelan down our right hand side.

David Artell made one change from the side that defeated Grimsby Town 2-0 on Saturday with defender Perry Ng returning from his one game suspension. In his absence against the Mariners, the veteran Nicky Hunt performed admirably again alongside Captain Ray but had to settle for a place on the bench.

Before kick-off there was an impeccably held one minute silence to remember those so tragically killed in Saturday’s helicopter crash outside Leicester City’s King Power Stadium. The players also wore black armbands in respect of the five lives that were lost on Saturday night.

Mansfield have only lost one game this season and before this evening, Crewe’s only defeat had been a narrow one in the local derby against Port Vale. It was expected to be a tight affair but the game began at an intense pace and chances were soon forthcoming.

Shaun Miller, who was arguably Crewe’s most lively performer in the first period, soon poked a difficult chance wide of the near post before the visitors stuck in only the 6th minute. Crewe stood off and then backed off Elsnik and the talented loanee from Derby County did not need a second invitation, driving a low shot past Garratt from the edge of the Crewe box. It was the perfect start for David Flitcroft’s Stags but the early set-back didn’t hampen Crewe's desire to attack.

Almost immediately a really tempting cross from Charlie Kirk only needed a decisive touch and then Ray and Ng almost combined at a corner to force home an equaliser.

Crewe continued to play some good stuff and Kirk spun and shot over the top of the Mansfield Town crossbar before Bowery tried to power his way past Matt Preston but was penalised for pulling as he entered the box.

It was Crewe asking much of the questions and we presented a threat from corners, but that final ball just didn’t quite drop for us. There were a few melees inside the Mansfield penalty area before Miller wasted our best chance of the first half.

Kirk was the provider again from the left hand side and his cross found Miller, who you would have backed to just side foot home from close range, but uncharacteristically he sent it wide of the target.

Mansfield always posed a threat though with their pace and directness in attack. Ray had a luck escape on the half an hour mark when trying to allow the ball to bounce over the touchline. Walker nipped around the Crewe centre-half and nodded the ball down and towards goal. Garratt sharpened his angles in anticipation of a cross shot, but Walker chose the near post and could only drag it wastefully into the side netting.

An entertaining game continued to be open and Crewe were just lacking that final quality ball after some good passing and movement. After Ainley had won a free-kick from Bishop, a well worked shot free-kick saw Pickering roll the ball across to Jones but he just lifted his shot over the crossbar.

Despite Crewe’s pressure and pressing in search of a leveller, it was Mansfield Town who delivered a sucker punch. They had a little rub of the green when Danny Rose went over in the build-up - but the referee played a key advantage to allow the play to continue. The ball bounced invitingly into the path of Elsnik and he made no mistake with a thunderous shot past Garratt for his second goal of the evening.

For all their effort and endeavour, Crewe found themselves 2-0 down heading to the break, mainly due to Mansfield’s clinical finishing.

The Alex tried to give themselves a lifeline before the interval with Miller robbing Bishop in a dangerous position, but after he had found winger Kirk, his shot was too tame and too close to the onrushing Olejnik.

There was still time for Garratt to make an excellent save after a shot from Walker took a wicked deflection. The Alex goalkeeper had been heading in the wrong direction but he adjusted his feet superbly to get down and make a one handed save.

The next goal in the contest was going to be crucial and Crewe desperately needed it to keep our chances of a result alive. Corey Whelan had an early opportunity that forced Olejnik to push his effort away. The Crewe striker was also a touch unlucky not to get a positive touch on a tempting cross from Pickering after he had cleverly used Kirk’s outside run as a decoy. It was just that final touch or piece of quality lacking.

In search of that all-important next goal, David Artell introduced Oli Finney for Jones and the youngster was certainly eager to get on the ball and pass forward. He was also a willing runner into the opposition half of the pitch and he impressed in only his fifth appearance of the season.

Hayden White headed a yard wide of the Crewe goal from a corner before they eventually killed the game off in the just after the hour mark. CJ Hamilton demonstrated great pace to get beyond Whelan and Walker beat the Crewe defenders to his low cross to smuggle it over the line. At 3-0, the game was over as a contest and Mansfield went on to control the proceedings.

CJ Hamilton shot just wide after we backed off him, properly fearful of his turn of pace and Rose was a constant nuisance to the Crewe centre-halves, both of whom were booked in the game.

To their credit, Crewe continued to mount attacks. Ainley forced Olejnik into a fine one handed save after he caught a shot on the turn superbly well and he really should have scored when after more good work from Pickering, the ball fell to him 10 yards out but he frustratingly dragged his low shot wide of the post. He was replaced by Alex Nicholls on 71 minutes.

Ray forced the Mansfield goalkeeper into a good save with an accurate header as the Stags looked to protect their clean-sheet.

The match winner, Elsnik, who scored twice as a  Swindon player against Crewe last season, nearly registered his first career hat-trick after he twisted and turned in on the edge of our box but Garratt watched his intentions well to save his curling shot. He would be denied the three goals but not the three points on a night where Mansfield Town showed their clinical and professional edge in South Cheshire.

September's original meeting was postponed due to Stags international call-ups, and tonight's match is the only scheduled EFL league match alongside two Carabao Cup ties.

Crewe are currently 17th in League Two, but will move up to 11th with a win.

Come along for some midweek action under the lights & back the boys to what could be a vital victory!