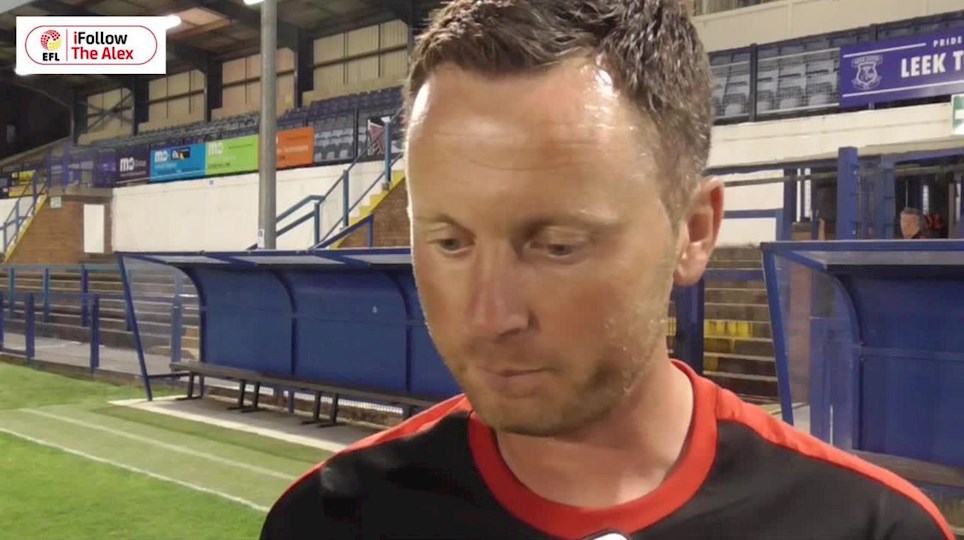 A well struck free-kick from Lewis Reilly was not quite enough to give a young Crewe Alexandra side victory against Neil Baker’s well drilled Leek Town side. The home side deservedly levelled following a free-kick of their own with Tim Grice stooping to head home at the near post.

It was an Alex side made up of mostly Under-23 players but there was the added bonus of Michael Raynes getting through the first 45 minutes, as did youngster Joe Lynch on his own return from injury. Brad Walker also completed 90 minutes, as did goalscorer Reilly.

In a fairly even first period, Lynch and Regan Griffiths looked the most likely pair to open the scoring on the night. Griffiths shot over after a smart turn and Lynch struck the crossbar with an opportunist effort.

At the other end, Walker did well to get his head onto a wicked cross inside the six-yard box and divert it behind for a corner. Our former Academy youngster Daniel Trickett-Smith was the biggest threat to us conceding and he had a dangerous looking cross deflected onto the top of the Crewe netting. He also created one or two openings that could well have been converted before the half-time whistle.

The former Liverpool U-23 player also headed a second half header into the gloves of the well placed Will Jaaskelainen.

Crewe also had chances in the second half with subs Connor Heath and Malachi Linton combining early on but Linton shot straight at the Leek goalkeeper after being found by Reilly.

After Linton was felled on the box, Reilly thumped home the resultant free-kick but the opening  goal from Crewe saw Baker introduce a host of fresh legs and it eventually paid off. Jaaskelainen made a superb double save to keep us ahead but he couldn’t do too much more to prevent Price heading home a free-kick from the Crewe left.