Crewe and Carlisle go into battle as two of the in-form sides in Sky Bet League Two for tonight's re-arranged fixture.

The Alex have won five of the last eight games & lost just once during that period, 3-1 at Bury on New Years Day.

The Cumbrians too are in red-hot form, losing just once in their last ten games & winning eight of those.

The visitors have won both previous meetings this season 1-0 in the league & in the FA Cup - it's sure to be a hotly contested evening at Gresty Road.

Crewe: Crewe have no fresh injury concerns ahead of the contest, with James Jones the only absentee.

After the 3-3 draw with Macclesfield, it remains to be seen if boss Dave Artell will opt to tinker with his side.

Carlisle: The Cumbrians are set to continue their integration of a whole host of new signings made in the final week of the January window into their squad after their 1-1 home draw with Exeter City at the weekend.

Callum O'Hare started against the Grecians, but fellow new signing Mark Cullen came on for the final 20 minutes from the bench.

Steven Pressley could stick with that same XI or make a whole host of changes to his side after the Cumbrians were below the level of their other recent performances on Saturday. 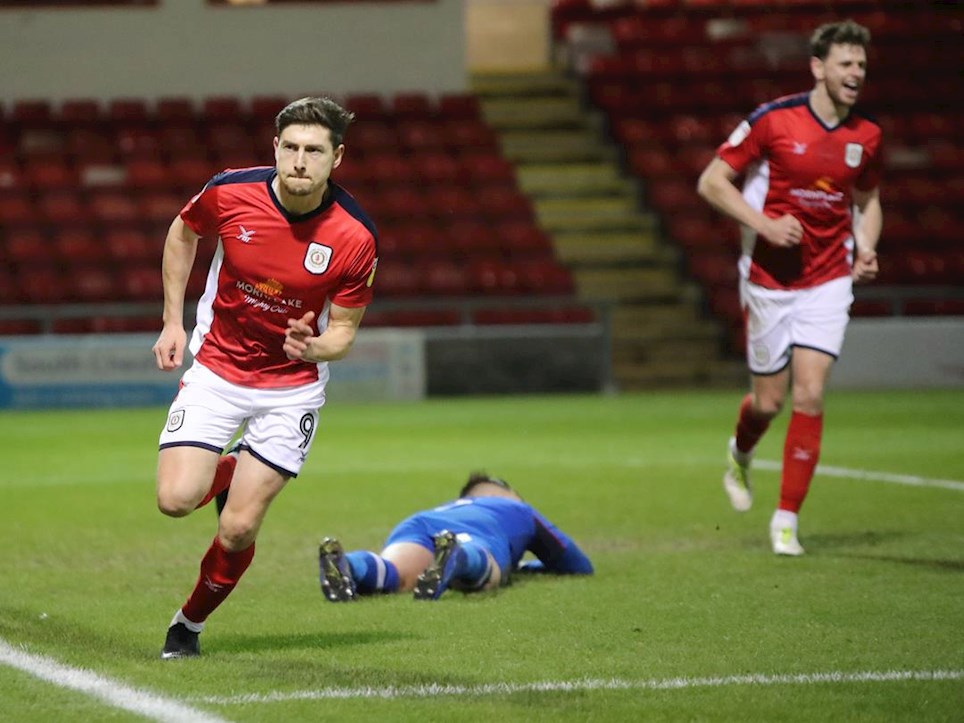 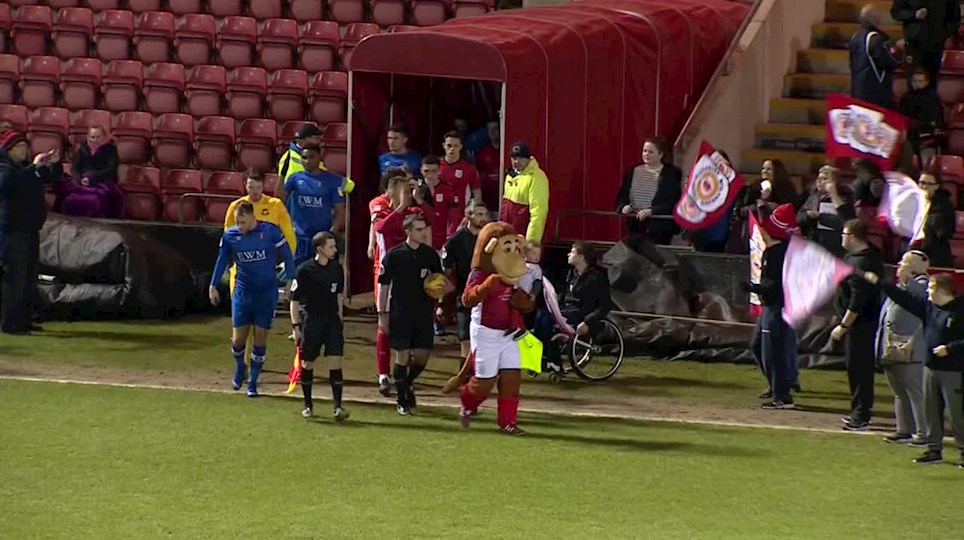 Shaun Miller came off the substitutes’ bench to score a winner against his former club and take Crewe within six points of the play-offs. Miller’s third goal of the season with 18 minutes left sealed a 2-1 win and takes the Railwaymen to 13th place in the table.

Crewe have won five successive home games and extend our recent run to just one defeat in nine matches.

Crewe had taken an early lead through Chris Porter following a great ball from the overlapping Harry Pickering, but to their credit Carlisle had drawn level through a well struck shot from their right back, Gary Miller, after going down to ten men following the red card for Jamie Devitt for kicking a grounded Perry Ng in the head.

Devitt committed the offence infront of the technical area and the fourth official and the red card soon followed. It ignited the game and Crewe kept their composure and discipline to win the three points.

David Artell named an unchanged side from Saturday’s 3-3 draw with Macclesfield Town. New loan signings, Jamie Sterry and Aaron Taylor-Sinclair, had to wait patiently for their opportunity once again after joining the club in the January transfer window. The only change came on the bench with Oli Finney replacing Nicky Hunt.

There was a superb one minute applause for the legendary Gordon Banks who sadly passed away after a battle with illness.

Crewe Alexandra made another fantastic start to the game with Charlie Kirk picking the ball up on the half way line and waiting for the overlapping Harry Pickering. The left-back produced a perfect cross and the in-form Porter side footed home his tenth goal of the season past Jose Veiga. It was a finely taken finish from the Crewe forward after just three minutes.

Moments later, Porter so nearly turned a ball back from the by-line but it was cut out by Anthony Gerrard and put behind for a corner. The tempo was really good in the game and you could tell there was a bit of needle to it with both sides, in form and confident in possession.

Crewe continued to press looking for a decisive second goal but were caught offside on too many occasions. A couple of busting runs from Paul Green were debatably tight though. Kirk had the ball in the net on one occasion but it had been ruled out for offside.

Ben Garratt had an early tester after a deflected shot from Tom Parkes but the Crewe stopper was well positioned to make a comfortable save.

Jamie Devitt’s reaction after Perry Ng was fouled saw the skilful playmaker red carded. He clearly studded the grounded defender, cutting his lip and it was no surprise that the red card followed after the referee took the time to discuss it with the fourth official. Crewe had the lead and now a one man advantage.

Following the dismissal, the Cumbrians boss Steven Pressley made an instant change with the experienced Gary Liddle replacing Nathan Thomas.

Crewe continued to play some great football and the growing in confidence Kirk nearly played Porter in behind before Carlisle hit back. Kelvin Etuhu found the overlapping full-back Miller and he drilled a perfect low shot into the bottom corner. It was a fantastic shot that gave Garratt no chance.

Perry Ng was strangely booked after being fouled by Danny Grainger and it left him on the knife edge throughout the rest of the game. Callum O’Hare was then booked for a foul on the excellent Ng.

Crewe were rocked a little by the equaliser and that final ball or cross was just lacking for a period. We occupied some great positions. A thrust from Eddie Nolan nearly saw his deep cross find Porter but Collin held it well underneath his own crossbar.

A break from Callum Ainley then saw him lift a through ball into Collin when Porter and Kirk were on either side before Hope drew a foul from Ray and the Crewe captain was booked. Grainger’s free-kick was headed over by Hope.

The first half ended with Ryan Wintle drilling a shot just wide form the edge of the box after good work by Green and Kirk’s dipping shot after Ainley and Pickering combined to find him.

Crewe started the second half trying to get on the front foot again and an early cross from Kirk nearly found Porter but Gerrard made a timely interception with his head and the follow up from Ray was wide.

On the break, O’Hare fired into the side netting  and half of the Carlisle fans must have thought it was in.

Ng was the villain the piece and his every touch was booed by the travelling Carlisle fans but cheered by the home support. Ng kept his composure fantastically well.

Crewe so nearly regained the lead after Pickering found Kirk and his accurate cross was headed down by Porter and saved well by Collin. He held it well on the line.

The Alex were patient in their build ups and kept the ball to make the extra man count. Kirk produced a sublime finish when just offside before Miller replaced Bowery on 62 minutes.

Hope was booked for catching Wintle in the face before Green was somehow denied twice after a Pickering cross dropped to him. Collin made a fantastic save to deny the midfielder a goal by pushing his shot behind for a corner.

The winning goal came on 72 minutes. Kirk provided the cross once again from the left hand side and Nolan's subtle little touch gave Miler a clear sight of the Carlisle goal and he slotted home his third of the campaign to put us in the driving seat in a highly contested affair.

David Artell freshened things up with the introduction of Lowery for Ainley and Dale replaced Kirk late on as well.

With ten minutes remaining, Pickering had a sight of the Carlisle goal but his fierce shot was blocked by Parkes. It was destined for the bottom corner.

Carlisle had a chance to drew level but Hope, free in the box headed wastefully wide.

Crewe also had a late chance to make it 3-1 when we broke from a corner. Carlisle had thrown the kitchen sink at Crewe and their goalkeeper Collin had joined in at the corner to be caught up the pitch. Crewe broke away and Green did well in the 92nd minute to be right up but his legs couldn’t quite carry him through and Regan Slater was able to cover and clear the danger with the goal still empty.

Crewe had to see out the remaining four minutes of stoppage time and Garratt never had to make another save. It was a hard fought win.

The Alex were beaten 1-0 by the Cumbrians in the FA Cup first round thanks to a freaky late goal, with United also winning the reverse league fixture by the same scoreline at Brunton Park in August.

This meeting will certainly be a hotly contested affair between two of the form teams in the division. Crewe have won five of the last seven whilst Carlisle better that with eight victories in their last nine matches.

The match takes place on Tuesday 12 February at the Alexandra Stadium with a 7:45pm kick-off.

Crewe have moved into the top half (11th) in League Two & are now nine points off the play-offs after a fine run, with high-flying Carlisle occupying fifth position.