Crewe host league leaders Lincoln City on Boxing Day in a bid to bring some festive cheer to the Alex home fans.

The Alex usually do well on Boxing Day, winning two & drawing one of the last three post-Christmas matches.

However, the current form isn't so pretty, losing all three December 2018 games - without scoring a goal.

The Imps won the reverse fixture 1-0 at Sincil Bank in October thanks to a second half goal by Tom Pett.

The Alex gave a good account of themselves that day & will need to battle similarly hard to get any change from a side that have been unbeaten since October 27th.

Crewe: A fully fit squad is available to David Artell for the Boxing Day clash after Paul Green made his return at Forest Green from the substitutes bench.

The Alex have won six of 11 home games so far this season, drawing two & losing just three. However, Oldham did run-out 2-0 winners last time at Gresty Road & the Alex are yet to score a goal in three games this December.

Lincoln: The Imps hold a deserved four-point advantage at the top of League Two at the half-way stage of the season.

They've lost just three in the league all season long & are unbeaten since October - a run of six league games - ten in all competitions.

Their three defeats this season have all come by a 1-0 margin to Colchester, Tranmere & Crawley, so it appears being tight at the back & keeping a clean sheet is vital to the Alex's hopes of success. 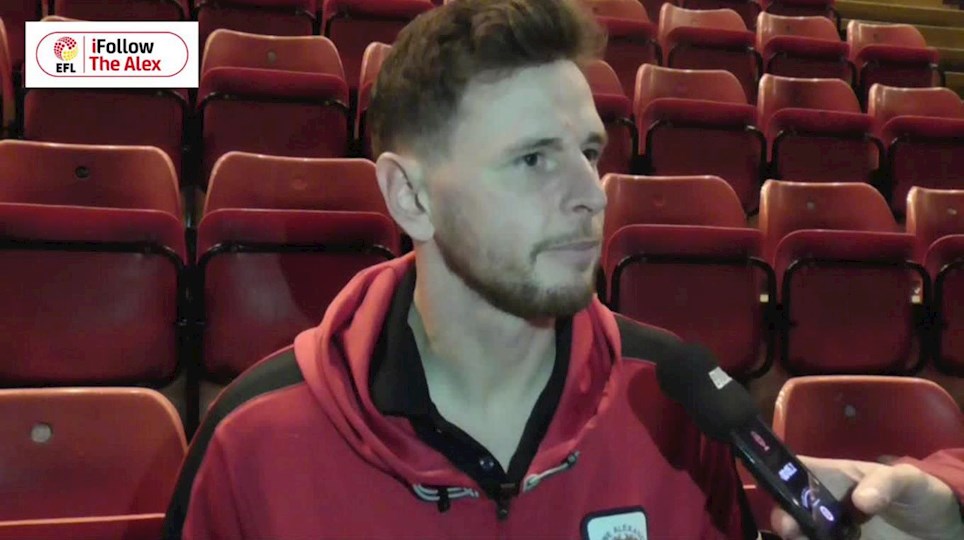 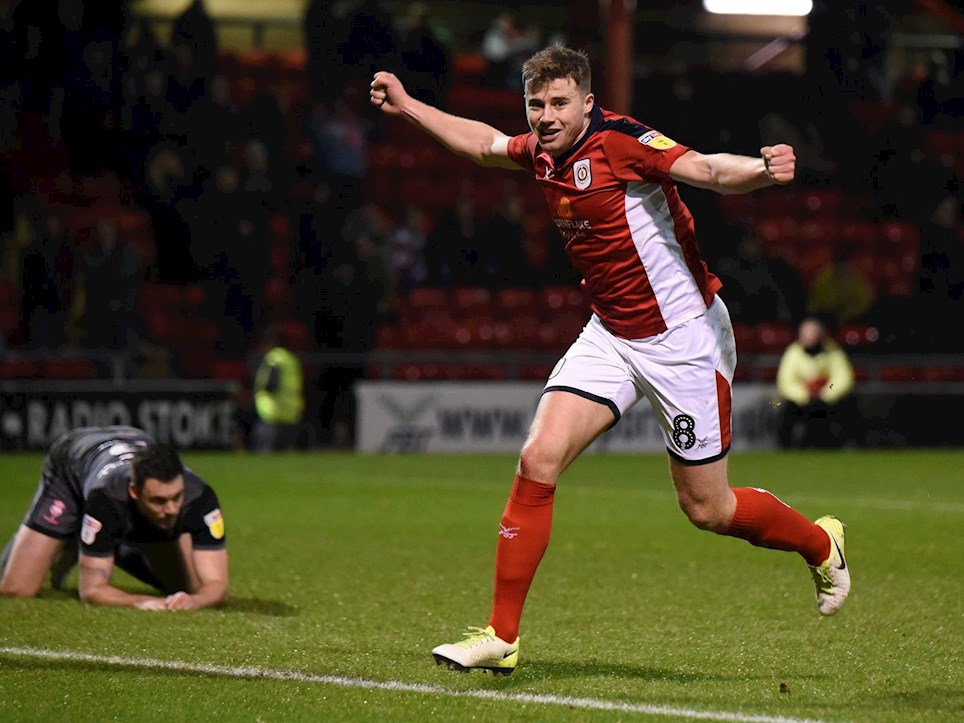 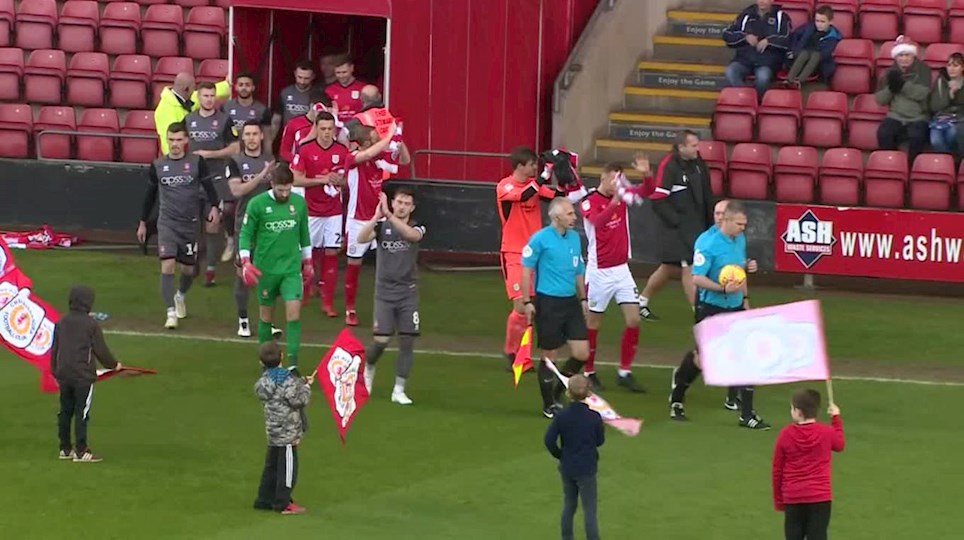 Second half goals from Chris Porter and James Jones gave Crewe Alexandra a thoroughly deserved 2-1 win over the League leaders Lincoln City at an atmospheric Alexandra Stadium. The performance was certainly matched by the result this afternoon and the winning margin should have been greater, such was our chances.

The Imps pulled a goal back deep into stoppage time through winger Harry Anderson and even that was harsh on David Artell’s side because we deserved the clean-sheet as well. Ben Garratt didn’t have too much to do all afternoon such was Crewe’s dominance.

The Boxing Day performance was one of our finest for a long time and it is not unfair to suggest that only having the one goal between the two sides flattered the visitors. It abruptly ended our run of three successive defeats.

Paul Green returned to the Crewe Alexandra starting line-up ahead of schedule from his knee injury. The veteran midfielder had played the last half an hour against Forest Green on Saturday. Perry Ng showed his versatility once again by moving to right-back after starting in central midfield at the New Lawn. The on-loan Corey Whelan dropped out of the matchday squad.

There was also a recall for Charlie Kirk after he had appeared as a second half substitute with Shaun Miller left out. In the search for more goals, David Artell, also made a change with his forwards with Chris Porter recalled and Callum Ainley left out. Alex Nicholls returned to the eighteen.

The current league leaders tried to get out of the blocks first but after Harry Anderson had eluded the intentions of Harry Pickering, Eddie Nolan came across to make a timely interception for the Alex.

Although we came into the game on the back of three successive defeats, the Railwaymen still started with a great intensity and with confidence. After some good combination play between Ng and Green, the Crewe full-back dragged a shot wide of the target.  Ng also had another one blocked.

On 11 minutes, Crewe had a great opportunity to take the lead. After Jason Shackell had cut out a clipped pass from Charlie Kirk, the ball was worked out to Harry Pickering and his accurate cross found Chris Porter but his glancing header cleared Josh Vickers’ far post.

More good play from a vibrant Alex saw Porter and Bowery combine to create half an opening for Jones, but it was a difficult height to keep down and on target.

The robust John Akinde got on run but Nolan again read the situation and him and full-back Pickering saw him out of play.

Crewe looked the more likely side to take the lead and after Ng showed some sublime skill to trick his way past winger Bruno Andrade, his pull back was cleared to Pickering and his superb effort from just outside the box had to be pushed out by Vickers at full stretch. It was a wonderful hit.

Akinde then raced into the box and there were two or three waiting for his pull back but Wintle did fantastically well to deny it reaching them and he cleared it over his own crossbar. It was a great intervention.

The Boxing Day fixture was developing into a really good game of football and it was Crewe pushing forward looking for their opening goal. Kirk caught one on the sweet spot but it thudded a yard off the mark before our former player Michael O’Connor made a brave block to deny Bowery who really caught hold of his shot.

Porter went up with Vickers to try and reach another accurate cross from Pickering. Lincoln were finding it difficult to retain possession and play in half of the pitch and another great chance fell to Jones on the volley but it wasn’t low enough to give us the lead we had deserved for our first half showing.

Crewe were camped in the Lincoln half of the pitch as we entered half time and it was no surprise that the visitors were keen to break our momentum and try and get into the interval on level terms. Jason Shackwell went down to allow Lincoln to try and regroup.

Danny Cowley also made a change with winger Andrade making way for Shay MCartan on 41 minutes. They wanted the whistle.

There was still time for a close range header from Green hit a body and bounce through to Vickers and Pickering struck one over from distance.

Paul Green continued to lead by example and he forced Vickers into an early save after he burst from midfield. He forced the corner that led to the opening goal. Jones found the supportive Pickering with a short corner and he whipped over a deep cross that was met by the head of Porter. The goal came just two minutes into the second half and it was thoroughly deserved.

Crewe’s dominance continued and Pickering fired a free-kick low into Vickers’ grasp before Nolan needed treatment for a head injury after a clash with Akinde.

Akinde also missed the chance for a tap in after McCarten reached the by-line on a rare break into the Crewe box.

The game became a bit scrappy with a flurry of free-kicks and yellow cards. Green was booked for holding onto the ball and Akinde for persistent fouling.

With the points slipping away for the Imps, Matt Rhead replaced Tom Pett. James Jones had a shot blocked by Bostwick before Pickering did likewise to block an effort from Frecklington.

Crewe needed the comfort of a second goal and we duly got it after a sublime bit of football down the left hand side. Kirk and Green combined fantastically well in a tight space to open up the Lincoln defence. Kirk’s final weighted pass was excellent for Green to reach the byline and his pull back was inch perfect for the onrushing Jones, who made no mistake with a tidy tap in. Crewe were 2-0 up against the leaders and looking comfortable.

We saw off Akinde for Kellan Gordon before the excellent Wintle burst through and had a low shot saved by the foot of Vickers.

The hard working Green was shattered with ten minutes left and had to be replaced by Ainley and Nicholls came on for the excellent Kirk.

Jones had a shot blocked late on as he went in search for his second goal before Lincoln gave themselves a lifeline in the 94th minute. Gordon did well in the build-up and Anderson helped himself to a tap in.

Crewe dug in and showed great professionalism to see out the extra six minutes of stoppage time. Garratt was not forced into any saves as Crewe saw out the minutes superbly well. Porter was also given a standing ovation as he made way for Miller.