Crewe Alexandra head into the meeting with pre-season promotion favourites MK Dons with optimism after opening the League Two campaign on home soil with a comprehensive victory & subsequent 1-1 cup draw with League One Fleetwood.

The Dons though perhaps represent the toughest test of the season so far, with a 100% winning record in league & cup so far this season & still hurting from League One relegation last season.

Crewe: Still waiting on the fitness of four key players, the Alex are hoping to welcome back at least one of Paul Green, George Ray, Chris Porter & Shaun Miller for the Dons match.

Green missed the midweek cup contest, Porter & Ray have been absent since the Morecambe game, whilst Miller is yet to feature at all yet this season.

The Alex are still unbeaten at home this season during 90 minutes. That 6-0 opening day Morecambe was followed by a credible 1-1 draw with Fleetwood in the cup, albeit losing on penalty kicks.

However, the 1-0 defeat at Newport County in a rain-soaked Rodney Parade was a concern, with the Alex managing only one shot on target during the whole match.

MK Dons: The visitors have made a perfect start on their return to League Two following relegation last season.

They boast a 100% winning record after dispatching Oldham 2-1 on the opening day, Bury 1-0 at stadium:mk & Charlton 3-0 in the cup in midweek.

One of the favourites for the League Two title this season, they poached former Exeter Manager Paul Tisdale to lead the assault this season & will certainly pose a huge test for the Alex this weekend.

The Dons didn't pick up any fresh injury concerns in midweek, but will be without Conor McGrandles, Peter Pawlett, Osman Sow, Brandon Thomas-Asante and Sam Nombe for the match. 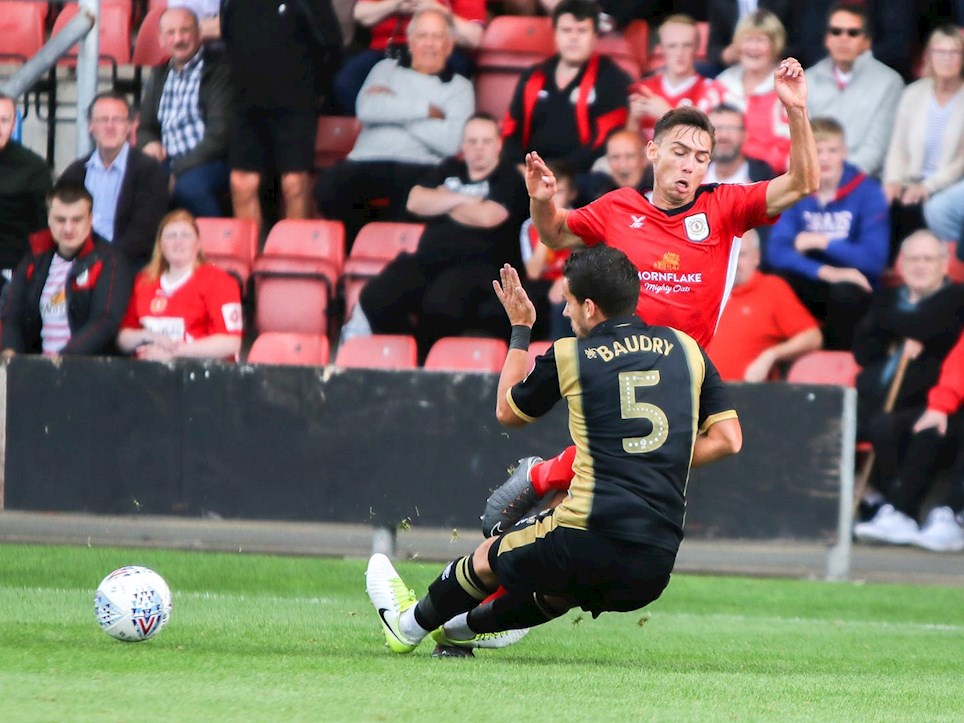 Crewe Alexandra extended their unbeaten home record to six matches with a hard fought draw with Paul Tisdale’s MK Dons side this afternoon. Neither side could find a winner as it ended goalless and Crewe will be disappointed not to have found one after giving everything they had.

The Alex looked the more likely to snatch it late on after the MK Dons substitute Mathieu Baudry was sent off in the dying minutes for a studs up challenge on Harry Pickering but we couldn't conjure up that genuine chance to perhaps nick it.

Crewe last lost at the Alexandra Stadium to Coventry City back on St. Patrick ’s Day and the Railwaymen have now started the new season with a win, draw and a defeat in League Two.

Paul Green returned to the starting line-up after missing our mid-week cup defeat to Fleetwood Town with a slight groin strain. Green returned to captain the side in place of Charlie Kirk, with Callum Ainley making his first league start of the season.

Shaun Miller and Chris Porter boosted David Artell’s numbers by returning to the squad following injury. Both strikers started the game on the substitutes’ bench but would be introduced in the second period.

Crewe made a really bright start to the proceedings and created some early half chances. Nicholls saw his firm shot blocked and then from a short corner from the right hand side, Ainley whipped a shot into the side netting after he had caught MK Dons unawares with a near post run.

MK Dons had started the new season with two victories against Bury and Oldham Athletic and it was evident that Tisdale’s side were full of confidence going into their third fixture in South Cheshire. Their lively forward Kieran Agard was a handful throughout and he couldn’t quite get his head on a deep cross at the far post. If he had, David Richards would have had a real test on his hands to keep it out.

More good build up from the Alex then saw Pickering and Green combine and the midfielder’s clever pull back from the by line found Jones and his low drive was deflected behind for yet another Crewe corner. It was promising stuff from the Railwaymen.

The MK Dons were a menace in attack though with the pace of Agard and the strength and power of Ousseynou Cisse. Midfielder Ryan Watson had a shot from the edge of the box blocked by Nicky Hunt. Hunt also needed treatment for a head injury after a clash with Cisse but he was able to continue after a short stoppage.

Nolan made a timely challenge on Agard inside the Crewe box as he threatened to get in behind and there was a shout for a penalty when Agard went down under a ‘challenge’ by Green but the referee wasn’t interested in their half-hearted appeals. Agard didn’t complain too much.

Ainley was a threat picking up those little pockets in midfield and after a positive burst into the box, he created just enough space to get a shot off but again it was blocked and spun behind for a corner.

From just over 20 yards out,  Agard spun sharply and sent a threatening effort over Richards’ crossbar.

Crewe shaded the first half in terms of possession and from another promising position around the opposition penalty area, Hunt’s delivery into a crowded box, found Jones and his instant lay off found Ainley but his low drive was blocked.

The best chance of the half though was created by the visitors in the 43rd minute. Cisse did brilliantly to get ahead of Ng close to the by line and his superb cross to the far post found Agard’s head. The striker did everything right in heading it down and upwards and it bounced awkwardly off the woodwork and Crewe survived.

There was still time for Hunt to make a fantastic last ditch tackle to halt another powerful run into the box from Cisse. It was expertly timed and had to be or the referee would have been pointing to the penalty spot.

In the early exchanges of the second half, Bowery went down under challenge but there was nothing in it and any penalty award would have been soft.

Ainley did some superb covering to deny Callum Brittain inside the box before he was replaced for Kirk just before the hour mark.

MK Dons were limited to long range efforts on Richards’ goal before Bowery was replaced for the fresher legs of Porter.

Brittain had a shot deflected off the impressive Nolan, who always seems to be in the right position at the right time.

Cisse was booked for a foul on Green and Kirk likewise for catching the same MK Dons player.

Ryan Watson forced a good save from Richards when he raced onto a snap shot after the ball bounced around the Crewe box. Richards did well to watch it and push it away.

The MK Dons made a double change with Lawson D’Ath and Dylan Asongani and Miller replaced the hard working Nicholls with just over five minutes left.

A genuine chance never really fell to Miller but it did to Porte, who was twice denied by Nicholls. Porter also had the ball in the net but he had strayed just offside and the goal as chalked off.

Baudry was then sent off for a two footed lunge at Pickering and he could not have no complaints. Crewe had the extra time but couldn’t make it count in the closing stages as Crewe continued to aim for the height of Porter.

Ng had a shot blocked in the mid-drift of Jordan Moore-Taylor and that genuine chance never materialised.

Crewe Alexandra welcome MK Dons to the Alexandra Stadium for the second game at home in League Two this season.

A repeat of the first would be most welcome, everyone of a Crewe persuasion enjoying the 6-0 victory.

The recently relegated Dons though look a much sterner test, having won all three of their matches so far this season in league & cup, conceding just one goal.