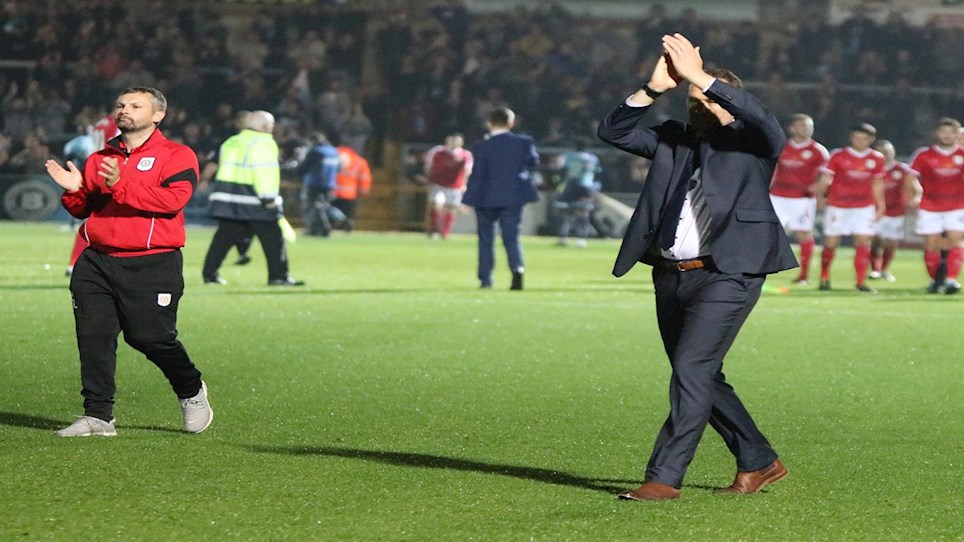 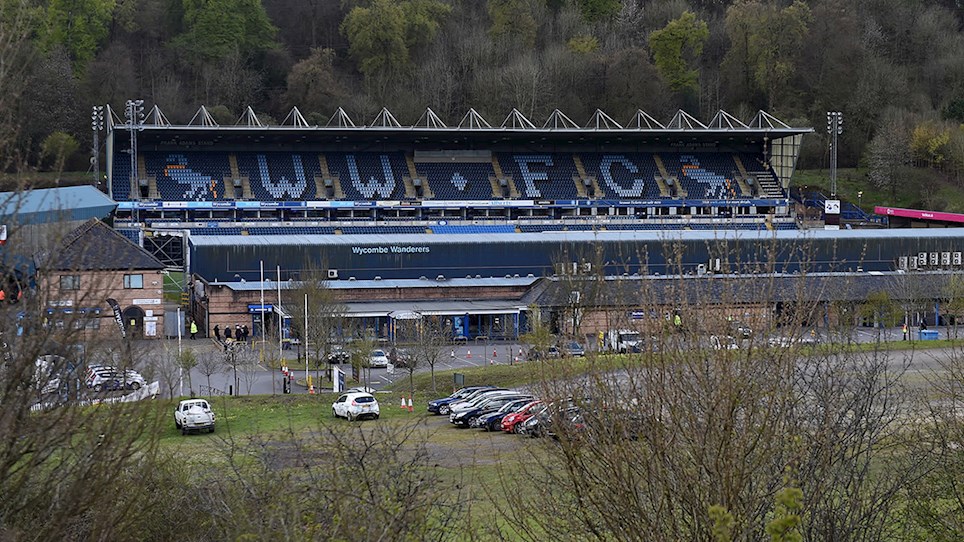 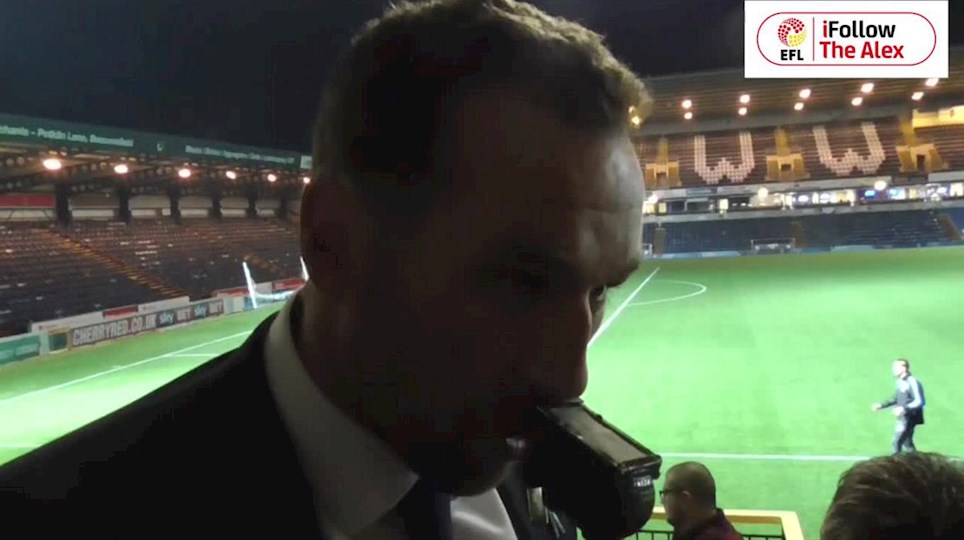 Heartbreak for the Alex as Wycombe score two late goals to snatch win.

Crewe Alexandra conceded two late goals to see a 2-1 lead slip from our grasp at Adams’ Park. A brace from Chris Dagnall had put us in the driving seat with 25 minutes left after Craig Mackail-Smith had given Wycombe the lead after he rounded Ben Garratt on 29 minutes.

The Railwaymen had produced a really gritty and determined performance but were dealt a devastating double blow thanks to unbelievable strikes from full-back Michael Harriman and Nathan Tyson in the final five minutes of play! Football can be an awfully cruel game and although you have to credit Gareth Ainsworth and his team for their belief, it was incredibly hard to take because the Alex had given their all in an attempt to bounce back from Saturday’s result against Carlisle.

David Artell could not have asked any more from his players, who were undone by two worldie strikes to leave us without a win in four games.

The boss made three changes to the side that lost so heavily against Carlisle United at the weekend. The Crewe Alexandra boss reverted back to a back four with a fit-again Perry Ng and Zoumana Bakayogo regaining their places with Conor Grant and the injured Ryan Wintle dropping out of the starting line-up.

There was also a recall for Jordan Bowery ahead of George Cooper, who had to settle for a place on the substitutes’ bench. It was Bowery’s third start of the season following outings against Cambridge and Newcastle United’s U-21s in the Checkatrade Trophy.

The Wycombe goalkeeper James Brown was called into action within the opening 10 seconds after Chris Dagnall threatened to reach a cross coming in from the left flank. Brown acted bravely to save at the feet of the Crewe forward.

A quick tempo to the game continued with the Wycombe winger Eberechi Eze whistled a shot past Ben Garratt’s left hand post.

Crewe confidently passed the ball around Adams’ Park in the opening ten minutes but a couple of crosses into the Wycombe penalty area were just too close to Brown.

Ben Garratt was called into action in the 13th minute after a clearance broke invitingly for the Wycombe full-back Joe Jacobson to have a crack from just outside of the box. He managed to keep his drive low and on target, but the Crewe goalkeeper moved across to push it behind for a corner. The physical Adebayo Akinfenwa wrestled for possession but Michael Raynes stuck to the task to complete a clearance up field.

Akinfenwa used his presence to then create half an opening for Eze but Tom Lowery tracked his run to make a block at the expense of a corner.  Wycombe continued to load our box at any opportunity but Crewe were standing firm and were certainly not messing around in getting it away from the danger area.

A promising move from the Railwaymen saw Ainley find space between the lines but he couldn’t find squeeze the ball through to Chris Porter to present him with a one-on-one situation.

The home side took the lead on 28 minutes and Akinfenwa was the catalyst when winning his header to send Craig Mackail-Smith through the centre of our defence. Nolan lost out to the Wycombe front man and he was able to round Garratt. A slight stumble made his finish that not assured with Perry Ng trying in vain to get back and clear from the goal line. From there being absolutely nothing between the two sides, Crewe found themselves a goal behind.

On 33 minutes, some good work from Bowery saw him produced a teasing cross from the left hand side, but it was too far ahead of Dagnall.

Crewe deservedly hit back on 42 minutes with a superbly worked move. A short free-kick allowed Brad Walker to whip over a wonderfully tempting cross to the fast post and Raynes showed great strength and awareness to head the ball back into the path of Dagnall and the striker wasn’t going to pass up that invitation to net his third goal of the season. It was no more than Crewe deserved after a fairly even first period.

The Alex started the second half as well as the first and a strong run from Bakayogo won an early corner but on this occasion Raynes couldn’t quite get it back across the box.

Tyson did likewise up the other end with a great piece of skill to pull the ball out of the sky. From the resultant corner, Dan Scarr headed down towards Sam Saunders but he could only send his looping header onto the roof of the Crewe net.

More great work from Bakayogo saw him win another corner after an appeal for handball. Referee Haines wasn’t in the best position to see it but from the deep delivery, Walker did well at the far post to keep the move alive and Brown was forced to save at the feet of Porter.

On 51 minutes, the impressive Eze went awfully close to restoring the home side’s lead when his well struck shot thumped against Garratt’s crossbar. It will be interesting to see if the Crewe goalkeeper got his fingertips to it because if he did, it was a necessary touch. The on-loan Eze was a handful all evening and his low shot was well held by Garratt.

Ten minutes into the second half, Ng was booked for persistent fouling and that permitted Jacobson to launch another high ball into the box. Raynes rose highest yet again to win the initial header and an off balance Scarr screwed his shot well over.

After volleying a spectacular effort over, Akinfewa went close again on the hour mark but the covering Nolan did fantastically well to get his header off the line. Three minutes later, Mackail-Smith was booked for diving in an attempt to win a penalty.

From the resultant free-kick taken by Garratt, Crewe took the lead with another well-crafted goal. Porter did fantastically well to win a flick on and his strike partner Dagnall raced between the Wycombe defenders, take a touch and calmly slot past Brown.

Wycombe lost Scarr through injury and that meant an appearance for the former Crewe defender Anthony Stewart at centre-half. The home side’s second change saw their goalscorer Mackail-Smith make way for Josh Umerah.

Now chasing the game, Crewe had to call on Garratt to make a tidy save from Saunders after he connected on the volley at the far post. The Alex were having to stand up to even more high balls entering our penalty area.

Wycombe’s final change saw Saunders make way for Nick Freeman. From an Ainley corner on 83 minutes, Raynes headed directly at Brown. Moments later, Akinfenwa went close with a header but he couldn’t quite get it on target to trouble Garratt.

With three minutes left, the home side created the equaliser down Crewe’s right hand side. In the build-up, Akinfenwa produced a sublime touch to send Eze down the channel and his pull back invited Michael Harriman to drive low past Garratt.

Wycombe smelt blood in the closing stages and the experienced Tyson smacked home a dramatic winner with the game entering the final minute. There was too space down the right hand side of the pitch, and after Eze had fed Tyson, his powerful drive gave Garratt no chance.

It was a wonderful finish from the Wycombe man, but felt like a dagger through the heart for the battling Railwaymen.

With four minutes of injury time, Cooper replaced Ainley, as Crewe had to go for broke but we couldn’t conjure up a genuine chance.