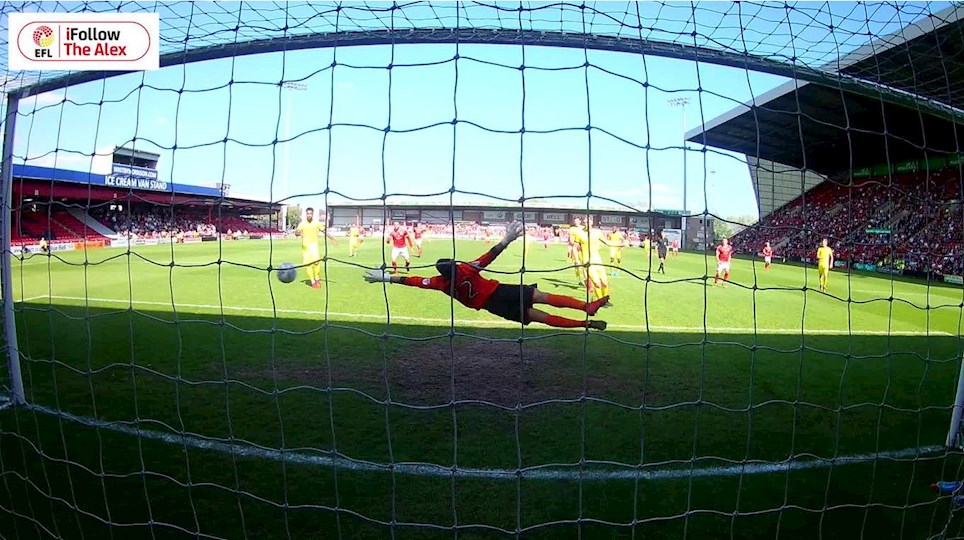 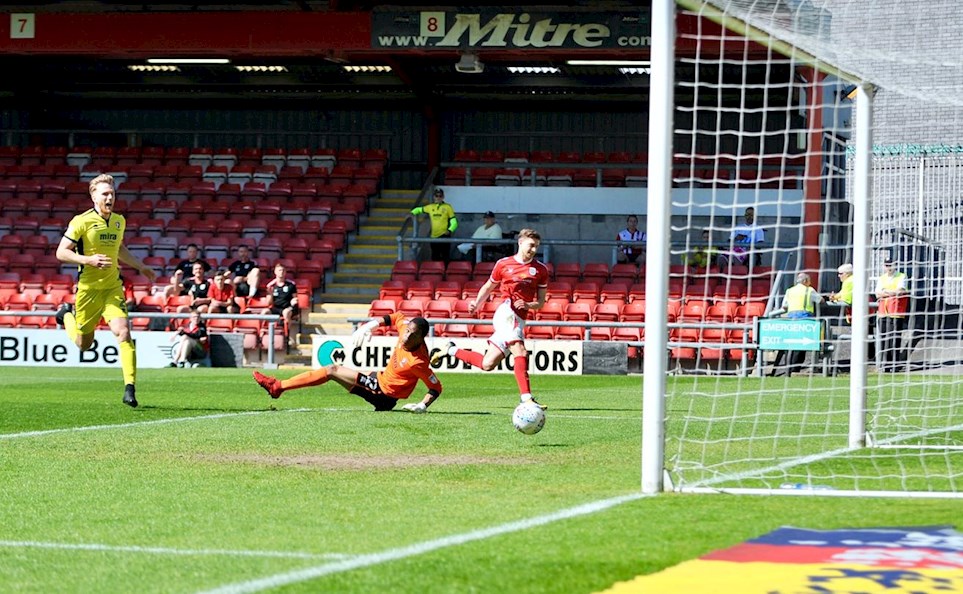 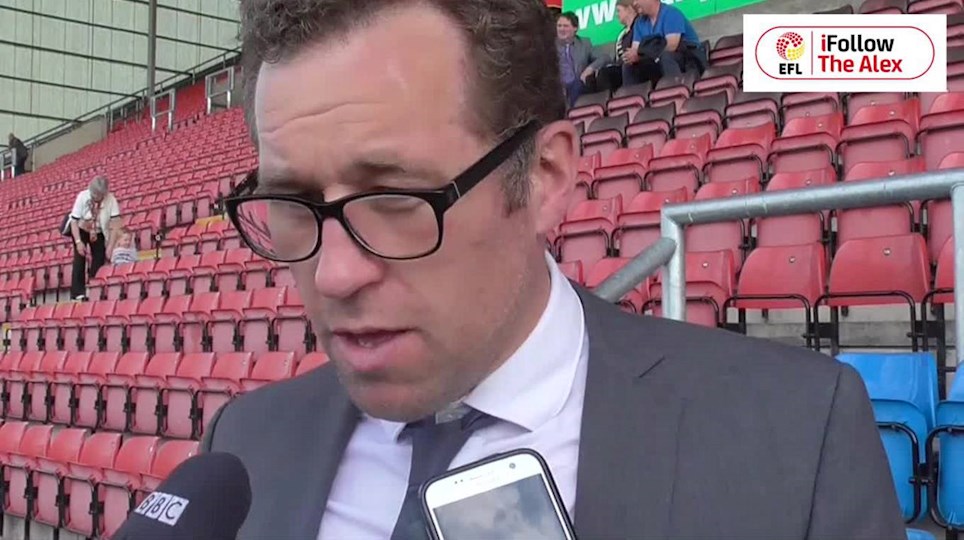 Video: Artell On The Final Day Cheltenham Win With His Academy XI

Crewe Alexandra finished the season with a 2-1 win over Cheltenham Town this afternoon thanks to two goals from the on-loan Shaun Miller. Miller scored in each half to cancel out George Lloyd’s 33rd minute equaliser to take Crewe to 56 points and see us beat last season’s total. It took Miller’s personal tally to six goals of a successful loan spell and he understandably won the Man-of-the-Match award.

It was a great shame that a foot injury prevented him from possibly taking the match ball home with him. After David Artell had made three changes, Miller had to hobble around in midfield to see out the final minutes.

Having previously achieved the feat on the final day of the 2012/13 season against Walsall, the Railwaymen accomplished it again.

In doing so, Artell made just four changes to name his home grown side. There was a return for the fit again James Jones, fellow midfielder Tom Lowery, young striker Lewis Reilly and Charlie Kirk. Senior professionals, Chris Porter, Paul Green and Jordan Bowery started on the substitutes’ bench. There was also a place in the squad of 18 for another former Academy youngster Josh Lundstrum.

The final game of the campaign kicked off in bright sunshine at Gresty Road and both sides checked each other out in the opening ten minutes. There were not many chances in the opening exchanges, but George Ray made himself known with a crunching tackle from behind on Mo Eisa. The captain was deservedly booked for the challenge on the halfway line. After treatment, the Cheltenham forward returned to the pitch.

Cheltenham created the first chance from a Joe Morrell free-kick with Taylor Moore flicking a header just wide of Ben Garratt’s far post. It wasn’t far away from bouncing in.

After Jordan Cranston had tripped James Jones on the edge of the penalty area, the midfielder took it and drilled it across towards Ray but it was well cleared by the Cheltenham defence.

Good work from Ng and Reilly found Ainley and his wicked cross was cut out before Crewe took the lead in the 17th minute. The Cheltenham defender Jamie Grimes made a right mess of a long ball from Ainley, allowing Miller to race in behind and slip it past Lovett for his fifth goal of his successful loan spell. It was another calm finish from the Crewe striker.

Eisa’s first sight of the Crewe goal saw him shoot just wide with a snap shot and the visitors' began to impose themselves more on the game. Full-back Cranston whipped over a dangerous looking cross that only needed a decisive touch from Sanmi Odelusi at the far post.

Gary Johnson’s side, who were beaten heavily 6-1 by Coventry City last weekend, also provided a threat mainly on the counter attack. Their leading scorer Mo Eisa was chasing Accrington Stanley’s Billy Kee for the Golden Boot award in League Two and the lively forward was involved in the equaliser on 33 minutes.

The striker bought the ball under control with his forearm but the referee didn’t spot the infringement and the build-up allowed Odelusi to cross and George Lloyd came in at the far post to slide it in at the far post. Artell was angered in the technical area because the referee and his assistant had missed it.

With Cheltenham on top for a period, if Llloyd had controlled a long punt up field from a free-kick he was in a one versus one situation with Ng but he couldn’t draw it in.

Lowery won the ball back in the middle of the park to find Kirk and his through ball was just about cut out by Grimes as Miller ran in behind again.

Kirk began to really show his potential with some really forceful runs. He hit one from 25 yards that was well held by Lovett and he also fired just over in the dying minutes of the first period. Miller showed how hard working he was by chasing a loss cause in the corner of the field and winning a corner in stoppage time but it was cleared.

Jordan Bowery replaced Reilly at the half time interval and he had a great chance to make it 3-1 after some great work from the impressive Kirk. Bowery just lost his footing at the crucial moment before he could get his strike off.

Cheltenham’s danger man Eisa shot across the face of the goal and was always willing to shoot on sight but he was kept relatively quiet by the excellent Ray and Wintle, who once again showed that he can play as a centre half if needs be.

Just after the hour mark, Crewe regained the lead thanks to some really bustling play from Bowery and a wonderful finish from Miller. Bowery just couldn’t go force his way through to get a shot off but the loose ball fell to Miller and he curled it superbly into the bottom corner for his second of the afternoon.

That prompted some changes for both sides. Porter and Green came on for Ainley and Lowery. Cheltenham also made a double change of themselves with Jerell Sellars and Matt Bower replacing  the two full-backs.

Eisa appeared to handball it again to create an opening but his shot from the edge of the box was tamely at Garratt.  Johnson introduced Danny Wright for George with 15 minutes left and in fairness the visitors' continued to press to try and find an equaliser.

Crewe also threatened to score a killer third with Porter having a shot blocked after good work from Jones and Bowery showed some great skill down the touchline to get into the box and force a save from Lovett.

More good work down the left hand side from Crewe saw Bowery find Pickering and his cross was deflected goalwards and forced Lovett into a smart save at the foot of his post.

Cheltenham were in a rush for an equaliser and they twice went close late on with Garratt getting a touch on a cross shot from Morrell. Eisa also dragged a late effort well wide as Crewe held on for the three points to finish in 15th place.

Video: Artell On The Final Day Cheltenham Win With His Academy XI