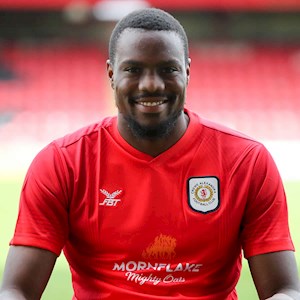 In On Loan
from FC Midtjylland

The 26-year-old came through the youth ranks at Valarenga in his native Norway, scoring four goals in 27 appearances before dropping down a division to Ullensaker/Kisa.

He joined Amkar Perm & scored on his debut away at Zenit St Petersburg to clinch a 1-1 draw for his new side. During his two seasons in the Russian top flight, he scored two goals in 28 games before he was allowed to move on in 2017.

This time he was in Kazakhstan playing for Premier League side Kairat & scored eight goals in 38 games. He stayed with the Club for two seasons until September 2018 when he signed a pre-contract agreement with Midtjylland, joining Danish Club FC Fredericia until 1 January 2019.

After officially signing for Midtjylland on New Years Day, he immediately returned to Fredericia on loan before he was recalled in March 2019 & sent out to Jerv.

He has scored five goals in 14 games for Jerv this season, and joins Crewe Alex for his first taste of English football.