Crewe Alexandra in the Community are amongst the first football operations to be granted an Emerging Talent Centre (ETC) licence, which is aimed at growing the women’s game.

The club’s not-for-profit community centre at Shavington has received one of just 60 licences to run an ETC, to be handed out across the country.

The ETCs are aimed at girls aged eight-16 and will operate for at least 30 weeks each season, starting in September 2022.

The drive will see the number of young female players engaged in FA programmes across the country rise from 1,722 to more than 4,200 by the end of 2023-24.

And open trials to become part of Crewe’s ETC will get under way this week.

“We are delighted to have been granted a three-year licence. In the first season, we will focus on girls at Under-10, U12 and U14 levels and we are looking forward to welcoming players to our newly-refurbished facility in September.”

Crewe Alexandra in the Community have announced open trial dates for their new ETC. 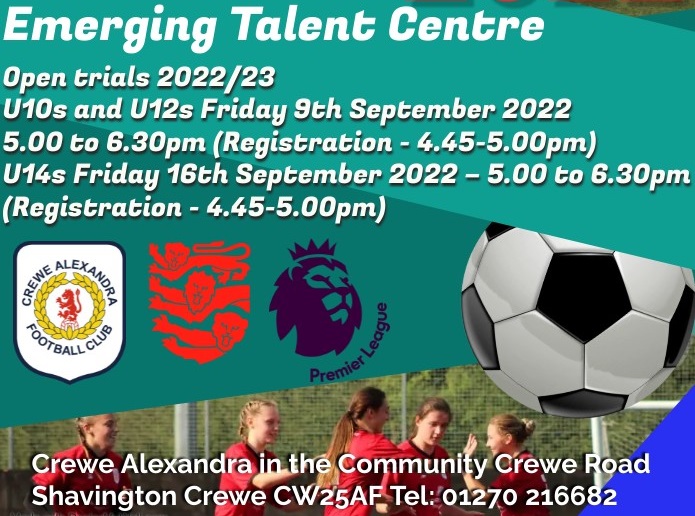 Funding for the ETCs has come from the Premier League's latest domestic broadcast rights package, which the Government signed off last year under the proviso that an additional £100m must be invested over the next four years in a number of key areas across football, including the development of the women’s and girls’ game.

The FA recently unveiled plans to grow its existing talent programme for women’s football, aiming to sustain its future and provide a wider and more diverse talent pool for the game.

Kay Cossington, the FA’s Head of Women’s Technical, said: “Our key aims are to provide greater access for more players whilst diversifying the talent pool, and I'm delighted that the early signs show that we are well on track to achieve those aims.

“We're extremely excited to be working alongside such a diverse group of clubs and organisations, which will help us identify players for the future, including future England Lionesses.”

Tony Scholes, Premier League Chief Football Officer, added: “The Premier League and our clubs are committed to developing football at all levels. It is important that girls across the country have greater opportunities to progress in the game.

“We're pleased to have provided the funding which will significantly enhance the pathways for young female footballers, and it is great to see the first licences allocated for the new ETC.”

Licences were allocated on a regional basis allowing for greater geographical coverage, whilst providing greater accessibility for a larger pool of players.

For more information, or to get in touch, visit crewealexandrainthecommunity.com