Crewe Alexandra football club is delighted to join forces with the #HerGameToo campaign, which aims to raise awareness of sexist abuse within the realms of football.

The campaign was launched in May 2021 to widespread support on social media - leading to the campaign's hashtag of #HerGameToo trending on Twitter in the build-up to the Emirates FA Cup final and launch video for the campaign gaining over 1 million views.

Since the campaign's launch, #HerGameToo has surveyed over 400 female football fans to build a wider picture of the experiences they have faced when attending games.

The Alex will now join the movement with the first-team squad warming up in #HerGameToo t-shirts for tomorrow’s game with Wycombe to coincide with our dedicated International Women’s Day fixture. 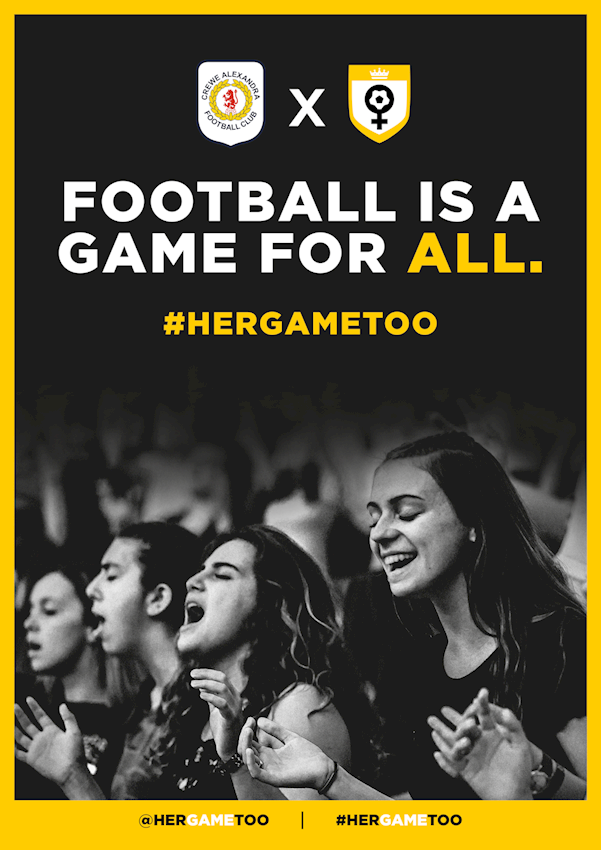 Sexist abuse or harassment will not be tolerated at Mornflake Stadium and by working closely with the #HerGameToo campaign we hope to create a safe environment at the for all supporters.

Crewe Alexandra Director, and Railwaymen Supporters Group Chairman Mark Beavan commented: “Football is a game for everyone and we see the work of the #HerGameToo campaign as vitally important in making football stadiums across the country places where all sectors of society feel welcome and accepted.

“We are a family club so we are fully committed to the work that the campaign is hoping to achieve and will offer our full support to raise awareness and to tackle the issue of sexist abuse.”

Lucy Ford Co-Founder of #HerGameToo added: "HerGameToo is a movement set up by 12 female football fans with the aim to raise awareness of the sexist abuse in football. Our aim to tackle the misogynistic culture surrounding football so we can create a better and more inclusive atmosphere for female fans for now and the next generation.

“We feel it is important to have the support and backing of football clubs throughout the country, across all levels, so we are delighted to be partnering with Crewe Alexandra and we look forward to working together.

As part of new partnership, a female Alex will be appointed a #HerGameToo club ambassador who can be the go-between the Football Club and the team at #HerGameToo.

You can learn more about #HerGameToo by clicking here.

You can also report incidents of sexist abuse by clicking here.