Crewe Alexandra learned the harsh reality of League One this afternoon with our sloppy mistakes in possession costing us some really soft goals at Fratton Park. The Alex had a rare off day defensively and the goals we conceded were avoidable to say the least with us really killing our own hopes in a contest we were very much in during an even first half. It was so uncharacteristic from the way we have defended for much of the season so far.

It is hard enough to get a positive result at Fratton Park without gift wrapping two opening goals to lively forward Ronan Curtis to leave us trailing 2-0 at the interval. Defensive mix-ups and lapses of concentration meant it became a bad day at the office. Before today, Crewe had only conceded 9 goals in our opening 12 league games, but this was one to forget. It was shame because we had started really brightly too.

A third goal from Tom Naylor on 53 minutes made it mission impossible and then an incorrect decision from the officials in awarding the home side a throw-in when it should have been ours, led to John Marquis getting his customary goal just three minutes later. It was damage limitation time for the Alex and Crewe certainly wanted the whistle and to quickly erase this 4-1 defeat from the memory bank.

Crewe got a late consolation goal from the penalty spot with Oli Finney calming slotting home in the 94th minute after he had won it himself when his shot was blocked by the hand of Brown. It was a muted celebration.

For the club’s first visit to Fratton Park since March 2017, David Artell was forced into making one change to his starting line-up.

Leading scorer, Mikael Mandron, was ruled out with a slight hamstring injury, so summer signing Offrande Zanzala was handed his first league start for the club in a central position. That meant a promotion onto the bench for young Regan Griffiths, who recently enhanced his reputation with a glowing performance against Shrewsbury Town in the Papa John’s Trophy.

The home side had an early opportunity from a 25 yard free-kick after only three minutes, but Ronan Curtis’ effort brushed off Charlie Kirk in the Crewe wall and that took the pace of it and it dropped through tamely to Will Jaaskelainen.

Zanzala had some encouraging early touches and an early corner from Harry Pickering had to be headed clear by the Pompey captain, Tom Naylor, before it reached Omar Beckles. A really promising move from the Alex then saw Kirk find Finney and his instant left footed pass out to Powell found the winger in space on the right but he was halted by the covering full-back Cam Pring.

In the 9th minute, some superb build up play nearly created the opening goal for Finney. Kirk did well off the touchline to find the supporting Pickering inside the Portsmouth penalty area and his really clever back heal found Finney, who cracked it first time on the run. His goalbound effort had to be pushed over one handed by Craig MacGillivray. The Pompey goalkeeper was making his 100th appearance for the club and his reactions prevented Crewe from taking an early lead.

Crewe actually had the better of the early exchanges and looked a threat, but Kenny Jackett’s in-form Pompey side were a threat on the counter-attack with the forward players they have at their disposal. Marcus Harness always looked to pass forward from midfield, winger Ellis Harrison was a handful and the partnership of Curtis and the league’s leading scorer, John Marquis, is arguably one of the finest in the division.

Zanzala rather unselfishly it must be said tried to find Finney inside the box, instead of possibly going himself with a curling effort for the far corner and he couldn’t quite get on the end of a superb cross coming in from his captain, Ng.

After a promising start to the game, Crewe literally gifted the home side the lead on 15 minutes. It stemmed from our free-kick after Andy Cannon was booked for coming through the back of Tom Lowery. Crewe were in control of the situation in our back third but a loose exchange of passes between Wintle and Beckles, allowed Harrison to pinch possession and after Curtis had ridden a challenge away from Wintle, an exchange of passes with Marquis saw him shoot first time past Jaaskelainen. It was a poor goal to concede from a Crewe perspective following a mix-up between two players that have been ultra-consistent, especially in the manner in which we surrendered possession and then Curtis didn’t connect cleanly with his shot either.

Crewe nearly equalised on 22 minutes thanks to more great play down our left hand side. Kirk and Pickering were again involved to find Finney, in another of those advanced positions he tends to occupy. The attack minded defender shot through a pair of bodies and it looked as though it was going to cross the line but somehow it was scrambled over the top of the crossbar. Powell seemed to spin and tried to lift it in, but his effort was deflected over for yet another Crewe corner.

The Alex had a number of corners, but didn’t make the most of them. Portsmouth always looked to hit us on the counter-attack when the Portsmouth defence cleared their lines. On one occasion, Marquis produced a sublime moment of skill to back heal his team on the counter attack. Harrison and Curtis combined again to find Marquis but under pressure from Offord, he sliced his shot wide of the mark. It was a let off.

Another superb back heal, this time from our own Kirk send Finney into the box but his low cross was blocked by Raggett. Crewe continued to occupy some great positions but couldn’t quite show that final bit of quality.

Crewe were very much in the contest though and Beckles had a close range header deflected behind for a corner after he got free from a Lowery free kick from the right.

The second goal on 40 minutes was arguably softer than the first one. Offord rolled a pass over to his defensive partner, Beckles, but a lapse of concentration allowed the ball to go loose under his foot and Curtis pounced. He wrestled with Beckles inside the box. The Alex centre-half had to let him free or risk conceding a penalty, and the Pompey striker rounded Jaaskelainen to bundle home his second of the afternoon. After defending so well all season, Crewe gift wrapped two early Christmas presents to a grateful home side. We only had ourselves to blame.

Curtis took a knock in scoring his second goal of the afternoon, as did Beckles, who failed to reappear for the second half and had to be replaced at the break by Olly Lancashire.

The next goal was going to be crucial and Portsmouth got in soft circumstances on 53 minutes. After Ng had got good distance on his headed clearance, the ball dropped to Naylor and after he had evaded Lowery his low shot beat Jaaskelainen from 20 yards out for 3-0. It was game, set and match.

It really was just three minutes later. It should have been a Crewe throw-in after the linesman gave it to us, but the referee allowed Portsmouth to take a quick one and that left Lancashire and Ng out of the equation to allow Curtis to draw a save from Jaaskelainen. Marquis’ follow up effort struck the underside of the crossbar but bounced invitingly for him to nod home goal number four. Crewe were livid about the award of the throw-in because we had been set to receive possession. It was obviously one of those afternoons where nothing was going in our favour. Now it was damage limitation time.

It was no surprise that the changes came with Murphy and Dale introduced for Lowery and Powell. It wasn’t long before we made our fourth change for the first time this season after the new ruling, with Ainley on for Wintle. Artell took the decision to rest some bodies for Tuesday night’s game at Accrington Stanley.

Griffiths came on for Zanzala for his league debut.

Dale nearly got his head to a Wintle cross, just before the midfielder made way on 65 minutes. There was also a scare when Ng and Curtis clashed in a tackle and both were evidently hurt, but were able to shake it off.

Crewe continued to try and press forward but it was a rare off day from the Railwaymen. On 75 minutes, it about summed up the afternoon when subs Dale and Ainley combined. The winger found Ainley, who expertly set himself up for a half volley and he was so unlucky to see his shot thump the Pompey post.

Ainley was a bright spark again as he tries to play himself into the team. He forced the Pompey goalkeeper into another smart save by his post before Crewe got their late consolation. Finney took it upon himself to go for goal from a corner and his shot was blocked by the hand of Brown.

Finney, deserved to take it after winning it, and he calmly rolled it home in the 94th minute. It was a muted celebration from everyone associated with Crewe. It was certainly one to forget for the Alex and we will quickly move on to Accrington on Tuesday night. 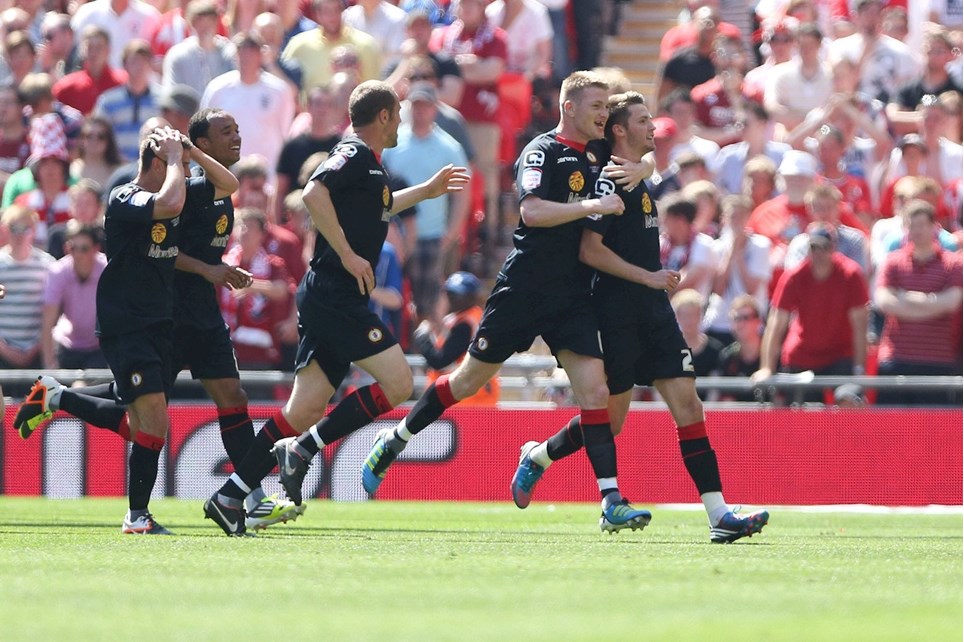