For our final game of the season against Cheltenham Town, David Artell named a starting line-up consisting of home grown players. The Academy XI went on to win the game 2-1 with our oldest of the graduates, Shaun Miller, scoring both goals at Gresty Road.

It is the second time in our history that Crewe Alexandra have been able to name a team made up of Academy graduates. Our former manager Steve Davis was the first to achieve the accolade when his young side defeated Walsall 2-0 on the final day of the 2012/13 season.

Here we look back at that team to see what they are up to now.

Garratt made his league debut against the Saddlers and kept a clean-sheet on a historical day. The now 24-year-old has gone on to establish himself as the club’s number one goalkeeper and he has now amassed over 200 career appearances in all competitions.

He joined Crewe Alexandra’s academy system later than the others after being spotted playing for our local neighbours Nantwich Town. The local lad played a major role in helping Crewe win promotion in 2012 via the play-offs and the Johnstone’s Paint Trophy the season after.

Kelvin was surprisingly released in the summer of 2014 by Steve Davis and he was quickly snapped up by Plymouth Argyle where he lost successive play-off finals to Wycombe Wanderers and AFC Wimbledon.

He joined Blackpool on a free transfer in 2016 and it was third time lucky for Kelvin, as the Seasiders defeated Exeter City in the League Two play-off final at Wembley. The right-back has now played 274 matches and has chipped in with 18 goals.

The most experienced of our graduates that day, Tootle had made his full debut under Dario Gradi back in November 2009 away at Northampton. His ability to play in numerous positions saw him play both full-back positions, in central midfield and during our promotion winning season of 2012, on the left hand side of midfield! His versatility helped him amass 224 games for Crewe before he left for Shrewsbury Town on a free in 2015.

Tootle had previously won the club’s Player-of-the-Season award before his injury plagued final season with us.

Now 27, the reliable defender has won Notts County’s Player-of-the-Season award as they reached the play-offs.

The current Crewe Alexandra captain made footballing history when he making his senior debut at Wembley Stadium! Ray came on in the final minute against Southend United in the JPT Final and just four games later was lining up in a home grown XI against Walsall. Ray may have had his injury problems over the last 12 months, but the former Wales Under-21 centre-back has still made over 100 appearances for Crewe Alexandra.

The son of the then manager Steve Davis, was in the team on merit. A solid and fierce competitor throughout this time at Crewe Alexandra, H suffered horrendously with knee injuries, but not before he had helped the club win promotion in 2012 and the JPT a year later.

Following the departure of his father in January 2017, Harry felt he needed a fresh start and duly signed for Scottish side St. Mirren on loan. He so nearly helped the club starve off relegation, scoring three goals from his nine appearances, which included a goal against Glasgow Celtic at Parkhead.

After suffering an injury, Davis returned to Crewe for treatment but following his release, he signed permanent terms with St. Mirren and returned to action in November. The centre-half made 22 appearances as the club won promotion back to the SPL at the first attempt.

Turton had made his debut in April 2011 when coming on for Mat Mitchel-King in a 2-0 home win over Stockport County. He was often utilised as a hard working central midfielder but it was right-back where he would later find his most natural position. Turton went on to make 190 appearances for Crewe before he was unable to agree terms on a new deal last summer. He subsequently joined his former Crewe teammate Kelvin Mellor at Blackpool.

He has enjoyed a successful first season with the Seasiders, making 43 appearances in all competitions and scoring his only goal in a 3-3 draw with Doncaster Rovers.

Arguably the most talented of the group, Murphy has agreed to stay on at the club after helping us win promotion via the play-offs in 2012. He was rewarded with the captaincy and it was he who lifted the Football League Trophy following the 2-0 win over Southend. His opening goal at Wembley Stadium will live long in the memory.

Murphy enjoyed his most productive season in 2012/13 and rightly swept the board when it came to the Player-of-the-Year awards.

The Walsall game was Murphy’s final game in a Crewe shirt and with a number of Championship clubs chasing his signature it was eventually Leeds United who secured his services for £1 million.

It all started so well for the attacking midfielder at Elland Road, when scoring a last minute winner against Brighton on his debut and he made 40 appearances during his first year.

He scored 3 goals in 32 appearances the following season and played 38 games in his third campaign, but then found it difficult to hold down a regular place under new boss Gary Monk.

To gain regular football, Murph joined Burton Albion on loan in January 2017 and he re-joined Nigel Clough’s side on a season-long loan last season. Despite a gallant effort, Burton were relegated on the final day of the season following a 2-1 defeat to Preston and Bolton staging a late comeback against Nottingham Forest.

Murphy still has a year to run on his current Leeds deal.

The skilful winger had broken into Steve Davis’ first-team in the September of 2012 and he showed his driven attitude by robbing a first goal off Mathias Pogba away at Bournemouth in the January. Pogs' effort would probably have crossed the line on its own, but Coco raced in to make absolutely sure!

After finding his feet at first-team level during the following season, Colclough became a key player under Davis, helping us remain in League One in 2015 with crucial goals away at Sheffield United and Coventry City.

He took that form into the following season and after scoring 8 goals before the New Year, it was no surprise when Champions elect Wigan Athletic swooped to sign him for an undisclosed fee.

The Potteries born wide man scored 13 goals in 68 appearances for Crewe and although he has been in-and-out of the Wigan team this season, he has still chipped in with 6 goals from 35 appearances as the Latics regained their Championship status by winning the League One title.

The electric winger was one of Crewe’s unsung heroes. He quietly went about his business on the pitch and memorably scored the second goal at Wembley to secure our promotion in 2012. He made a staggering 297 appearances for Crewe over his seven seasons as a professional with us and scored 33 goals.

He was surprisingly not offered a new deal by Steve Davis in 2014 and promptly joined our rivals Port Vale. He spent two seasons at Vale Park before moving on to Bristol Rovers in the summer of 2016.

After making just 56 appearances for the League One club, the 29-year-old has not been retained this summer and is now a free agent.

Another Crewe lad who actually made his debut under Gudjon Thordarson. Leitch-Smith replaced Joel Grant in a 3-2 home defeat by Bury in what proved to be Thordarson’s final game for club.

The clever forward then thrived under Dario Gradi and Steve Davis, especially in our promotion winning season when he scored 9 goals in 44 appearances. A year later, he was on the bench for our JPT win over Southend United and although he made 24 appearances during the next campaign, he too was released in the cull of 2014.

AJ moved to Somerset to join Yeovil Town but after finding it difficult to settle he moved back ‘home’ to sign for our neighbours Port Vale.

He scored a healthy 10 league goals from just 27 starts for the Valliant’s and that prompted Shrewsbury Town to sign him in the summer of 2016.

His chances have been limited with the Shrews and he started just 8 league games before being allowed to join Dundee on loan. Leitch-Smith, 28, has enjoyed his Scottish adventure, scoring seven goals in 32 games for the SPL side.

The former England Youth International has suffered terribly with injuries and that has limited his appearances to just 37 since leaving Crewe almost four years ago. Still only 23, the lively forward still has time on his side to come again.

Clayton was right up there alongside Nick Powell when they came through the Youth ranks together and it was no surprise that he made his debut as a 17-year-old against Morecambe in April 2011.

His eye for a goal saw him score five goals in his first full season, the most important of them coming in the play-off semi-final draw at Southend United. At Wembley, Clayton replaced Powell for the final 10 minutes of the game.

His next trip to Wembley saw him score the second goal in the 2-0 win over Southend United and he scored 9 goals from 42 appearances in 2012/13. Sadly, he broke his ankle in an FA Cup tie against Wycombe in November 2013 and he never played for the Alex again. A contract dispute rumbled on and eventually saw him move on to Bolton in the summer of 2014.

Clayton suffered with serious injuries whilst at Bolton and after scoring just two goals from 20 appearances, he joined Blackpool last summer. It hasn’t gone smoothly for him under Gary Bowyer and he made just 7 appearances last time out. 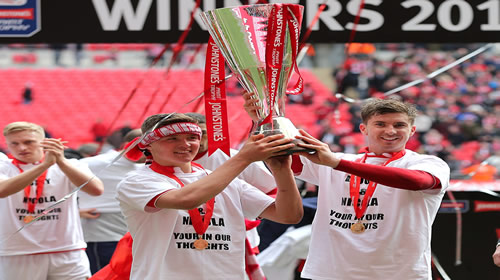