Kick-off is at 1pm & entry is free to all supporters. There will be a tea bar in operation serving hot & cold drinks as well as confectionary.

Alex Morris' side drew 2-2 at Watford last time out, being denied three points by an injury time Hornets equaliser.

Some first team players may get game time to keep the legs ticking over after the first team game with Mansfield this weekend was called off due to Stags international call-ups.

QPR come to town in the same scenrario, with all Championship clubs receiving an international break. Though their larger squad may contain a separate Under 23 set-up. 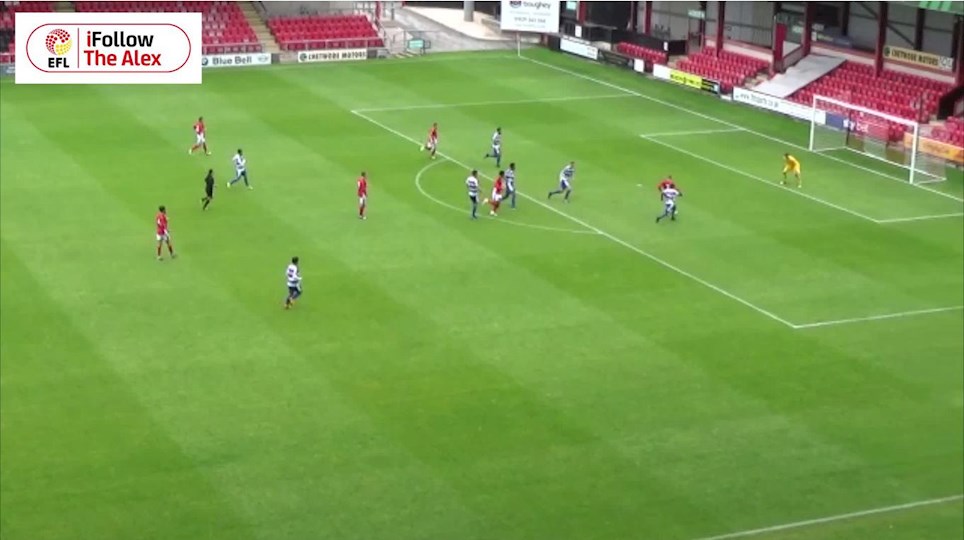 Crewe Alexandra Under 23s recorded a dramatic first victory of the season with a double of late strikes to see off QPR 3-1 at Gresty Road.

Joe Lynch rounded off a sweeping counter a minute from time to score the winner, with Malachi Linton tapping home deep into added time to add gloss to the result.

Oli Finney had put Crewe ahead in the first half, but Ilias Chair's 84th minute equaliser had looked like it was going to frustrate Alex Morris again.

His U23 side had conceded two late equalisers in their four previous games heading into the match, the Alex picking up three draws & one defeat to start the season.

It was another positve performance by Crewe with the right result at the end of a hotly contested game.

Tommy Lowery forced Hoops goalkeeper Marcin Brzozowski into a flying save as early as the third minute with his left-footed ferocious effort from the edge of the box.

The remainder of the first half was an altogether cagey affair, until Finney struck the opener in the 33rd minute. It was nice play from Lewis Reilly to pass inside for Linton, who then played a superb ball behind the defence for Oli to take a touch round the defender & goalkeeper before eventually finding the net.

The second half followed a similar pattern with chances few & far between - Finney firing wide from another Linton through ball by far & away the clearest opening for either side.

But the game sprung into life for the final ten minutes.

With the R's pushing for an equaliser, Lynch managed to scamper away down the left on the counter on 82 minutes. He got to the left by-line & fired across goal - Reilly reacted first to stick out a leg but his effort rattled the crossbar from close-range.

It looked as though the Alex would pay when two minutes later QPR were gifted an equaliser. In possession in the defensive third, Lowery's attempted pass into midfield was intercepted by Chair. He took a touch out of his feet & fired low into Dave Richards' bottom corner.

But Crewe came back strong. With the Hoops on an 89th minute attack, a ball was pumped up field on the counter, Reilly did well to knock-down to Linton. He sprayed a pass out to the onrunning Lynch who took a touch into his stride & fired left-footed high into the top corner from the edge of the box.

The contest was sealed with 94 minutes on the clock, Reilly forcing Brzozowski into a low save to his right, but Linton was waiting to pounce on the rebound & tapped in for his first U23 league goal.

Next up for Alex Morris' side is a trip to Barnsley this coming Friday.

Click here to view the Under 23s fixtures & results.