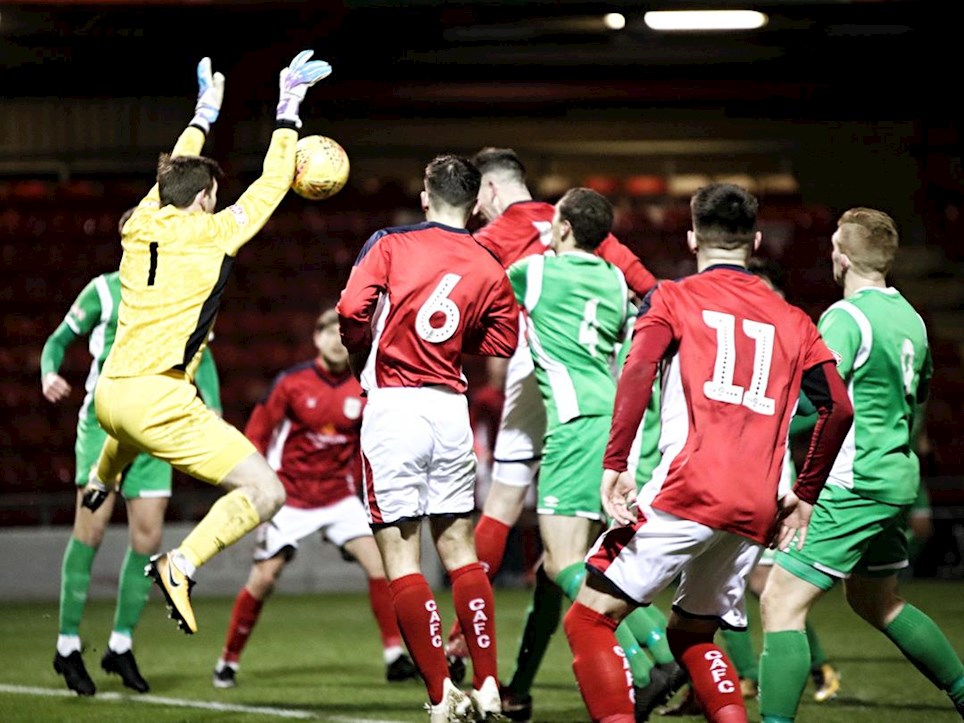 Crewe Alexandra Under 23s exited the Cheshire Senior Cup at the first round stage with a 2-1 defeat to holders Nantwich Town.

Former Alex player & academy graduate Callum Saunders scored both goals for the Dabbers early in the first half. Owen Dale responded after the break but the fine form of goalkeeper Fabian Speiss almost single-handedly sent Town through.

It was a bitter cold evening at the Alexandra Stadium & the Alex were slow out of the traps allowing former player Saunders to get in behind on 12 minutes to latch onto a Danny Glover through ball. He turned Luke Offord inside out on the edge of the area before dispatching his shot low into the corner.

Crewe searched for a leveller & forced a glut of corners that Nantwich defended well.

From one of those corners, Speiss collected the delivery & bowled out for a quick 22nd minute counter-attack. Caspar Hughes sprinted 40-yards with the ball before laying off to Saunders again on the corner of the 18-yard box. Taking a touch to steady, he whipped a masterful shot across goal into the far corner to leave Dave Richards with no chance.

Shocked by Nantwich's early two goals, Crewe struggled to get going in the first period but should've reduced the deficit before the break when Alex Nicholls went through one-on-one, but Speiss rushed out of his goal to block the shot with his legs.

But the Alex did come out all guns blazing in the second period. A deep free-kick just evaded Michael Raynes for a tap-in from close-range before Dale pulled a goal back on the 59 minute mark.

Speiss had made a flying save to deny a long-range Oli Finney shot, but Tommy Lowery picked up the loose ball out on the left to fire over a lovely cross which Dale glanced into the far corner with a lovely header in off the post.

The goal helped Crewe build up some steam & it's only the form of goalkeeper Speiss that helped Nantwich secure the victory.

He made terrific stops from subsitute Malachi Linton & Finney before making a miraculous double-save in the 87th minute to stop Regan Griffiths & Finney again.

Substitue Griffiths picked out the top corner with a 25-yard rasper, but Speiss flew through the air to his left to parry away. Finney came onto the loose ball on the angle & rocketed a thunderbolt towards the top corner, but again Speiss was on hand to make the flying stop.

They were the final chances of the evening & the Dabbers ran out 2-1 victors to progress through to round two. Best of luck to them for the rest of the competition.