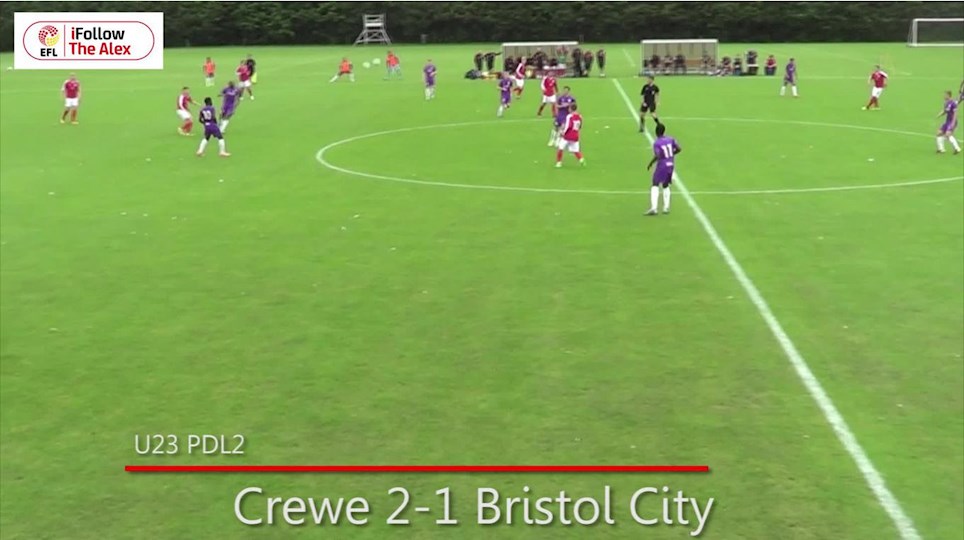 Crewe Alexandra’s Under-23s deservedly recorded their second win of the season this afternoon thanks to well taken goals from Owen Dale and Charlie Kirk against Bristol City.

Alex Morris’s side created the better of the chances at Reaseheath and responded well when Bristol City drew level through Marcus Day with just over 20 minutes remaining.

The Crewe youngsters were bright in their forward play with Kirk and Dale often getting joy in behind the Bristol City back-line. A good break from the quick Dale saw him create an opening for Lewis Reilly but the Crewe forward was denied at the near post and Dale could only fire into the side netting on the follow-up.

Genuine chances were limited before Dale showed his great pace to race clear and fire Crewe into a 33rd minute lead. His finish was too powerful for the Bristol City goalkeeper Sesay to keep out.

The Bristol City goalkeeper was busy again to keep out early second half efforts from Dale and Harry Pickering. Kirk also had an effort deflected behind for a corner after a forceful run from deep.

Whilst it looked as though Crewe were the better bet to double the lead, it was the visitors who drew level through Day. There looked to be initial offside in the build-up, but it was still a fine finish from the Bristol City midfielder past David Richards.

Crewe responded superbly and after Pickering’s shot was pushed out, the supportive Kirk kept his cool to guide his shot past two defenders stood on the goal line. It was no more than Crewe deserved and there were late chances for Kirk and the impressive defender Ollie Harrison to make the result more secure.