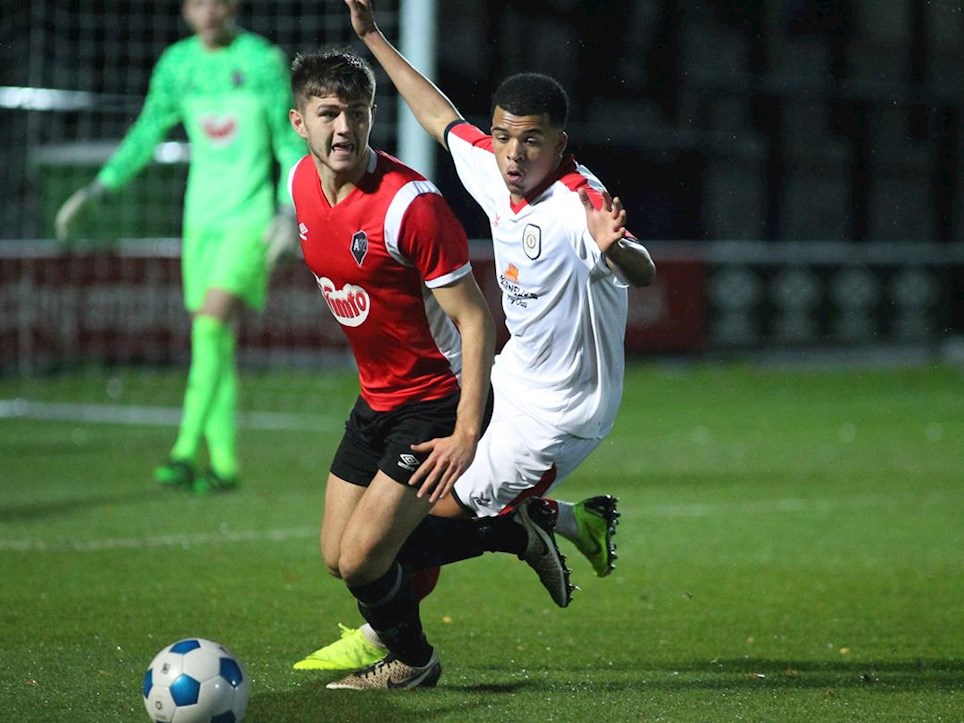 Crewe Alexandra Under 18s ran out 2-1 victors at the Peninsula Stadium to see off a plucky Salford City in the second round of the FA Youth Cup.

A trip to Bristol City now awaits Lee Bell’s side in round three after Connor Heath & Malachi Linton struck the goals to seal progression.

Douglas James-Taylor had pulled the Ammies level before half-time, but Crewe’s quality showed in the end with a professional final 25 minutes to the game securing a safe passage through.

As you’d expect, Salford came flying out the traps from the get-go & almost took the lead in just the second minute. Taylor Dyson got his shot away from the edge of the box that took a nick off a covering Alex defender & clipped the post on its way out.

But Crewe then came on strong & took control of the tie with the opener in the 11th minute. Malachi Linton whipped over a right-footed cross from the left-hand side & Heath broke clear of his marker to stoop & power his header low into the net from six-yards.

The hosts didn’t wilt thereafter, the opposite in fact. Alex stopper Sam Booth was forced into a good save in the 18th minute to beat away the lively James-Taylor’s 20-yard effort.

At that point the contest was end-to-end & the hassling & harrying of Ethan Hartshorn almost helped restore Crewe’s advantage. He mugged an Ammies player of possession inside the attacking third & the loose ball broke Linton’s way – the striker seeing his measured shot from the edge of the box tipped around the post by goalkeeper George Neave.

The hosts drew level with 26 minutes on the clock. Dyson walloped a 25-yard direct free-kick on goal – the effort was straight at Booth, but the powerful dipping effort was spilled & James-Taylor reacted quickest to beat Booth to the rebound & loft his close-range effort into the corner.

But Booth was twice on hand to keep the scores level before the interval as Salford grew in confidence, first diving to his left to keep out another fierce James-Taylor shot, before getting down low to his right to stop Brandon Lockett from scoring spectacularly from 25-yards.

Salford kept up their momentum after the break & twice went within inches of taking the lead in the opening 13 minutes of the half – centre back Markell Foulds planting a header from a set-piece situation narrowly wide before captain Alex Doyle struck a daisy-cutter just past the post from the edge of the box.

After weathering that storm, Crewe struck the killer blow with 65 minutes on the clock. Half-time substitute Abdul Djalo wriggled free of two challenges before striking low on goal from 20-yards.

Neave saved the effort, but could only parry into the path of Linton who tucked home the rebound with aplomb.

The remaining 25 minutes of the contest was a relative non-event. Salford huffed & puffed for a way back into the game, but Crewe confidently kept possession & frustrated their opponents with their passing game.

A gallant effort from the Ammies who made history by making the FA Youth Cup round proper for the first time, but the Alex can now look forward to an all-PDL2 match-up with the Robins at Ashton  Gate.

Crewe Alexandra Under 18s will take on Salford City in the second round of the FA Youth Cup.

The Ammies defeated Bradford City U18s 3-1 to set-up the meeting with the Alex, which will be played at Salford's Moor Lane Stadium.

The match will be played on Friday 9 November, kick-off 7:30pm.

Tickets for the match will be a pay-on-the-day basis & are priced at £5 adults, £2 concessions.

Crewe made it through to round two with a 2-0 victory at Morecambe in front of 170 supporters at the Globe Arena thanks to goals from Malachi Linton & Tyreece Onyeka.

Why not enjoy some Friday Night Football & get behind Lee Bell's lads at Salford.

Click here to view all of the Under 18 fixtures & results.