Crewe Alexandra travel to face Salford City in their third League Two fixture of the season on Saturday (August 11, 3pm).

Alex Morris's men will be aiming to make it three league wins on the spin at the start of the 2022-23 campaign, while unbeaten Salford will be looking to make it back-to-back wins at home.

Owned by Manchester United legends Gary Neville, Nicky Butt, Paul Scholes, Ryan Giggs, Phil Neville, and David Beckham, along with majority shareholder Peter Lim, Salford have been on a meteoric rise from the depths of non-league since 2014.

Salford have finished 11th, eighth and 10th in their three EFL seasons so far. They will certainly be targeting promotion this time around.

Neil Wood was appointed to his first managerial post at Salford earlier this year. The 39-year-old came through Manchester United's academy and went on to play for the likes of Burnley, Coventry and Blackpool, before beginning a career in coaching. H

e worked his way up to become U23 Manager at Manchester United in 2019, but is now in the hot seat at Salford.

Alex Morris: "You would suggest that on paper this will be our hardest fixture yet so it’ll be a good barometer of where we are at right now. They have a fluid and flexible system which changes depending on whether they are in or out of possession."

Neil Wood: "One of our big strengths is that we are really strong defensively, and that's a good platform to build on. But we have got some extra bits to work on to get better, going into the next few games."

Charlie Colkett has picked up a hamstring injury and will be unavailable. Christopher Long, Dave Richards, and Rio Adebisi are still working towards full fitness.

It’s honours even in the two previous times Crewe have faced each other. Crewe emerged as 4-1 winners in the first-ever meeting, in September 2019, when Chris Porter (2), Tom Lowery, and Harry Pickering got on target. City won 3-1 in the return fixture, with Pickering getting the consolation.

Craig Hicks, who is based in Surrey and is now into his fifth season as an EFL referee, will be the man in the middle.

A first-half strike from Conor McAleny and a second-half brace from Brandon Thomas-Asante earned the home side maximum return.

Alex Morris’s men had to play for more than an hour with 10 men in searing hot conditions, after Bassala Sambou was given his marching orders for his part in an off-the-ball incident.

It was a long and difficult afternoon for the side, as hopes of making it three wins to start a season for the first time in 48 years evaporated.

Now they must lick their wounds and prepare for the visit of Sutton United on Tuesday (7.45pm).

Morris made one enforced change to the side that beat Harrogate 3-0 last time out in the league, with Billy Sass Davies coming into the heart of defence for the injured Rod McDonald (groin).

The Alex forged the first big chance of the game on eight minutes, when they won the ball high up the pitch and Tariq Uwakwe crossed for Dan Agyei – only for the unmarked striker to nod wide.

But in their first real attack, Salford hit the front on 18 minutes when McAleny raced through on goal. The Crewe defenders looked for an offside flag but it never came, and the City man found the net despite the efforts of keeper Arthur Okonkwo.

The game changed just after the half-hour mark when an off-the-ball incident involving Theo Vassell and Sambou resulted in the Crewe man being shown a straight red card.

Callum Hendry rattled the woodwork from range, and Thomas-Asante headed wide from a great position and saw a close-range effort blocked by Okonkwo, as the home side looked to press their advantage before the break.

Salford made it 2-0 five minutes after the restart when Thomas-Asante let fly from outside the area and his low effort found the bottom corner.

And it was three shortly afterwards when Ibou Touray got down the left and his low cross was poked into the roof of the net by Thomas-Asante. 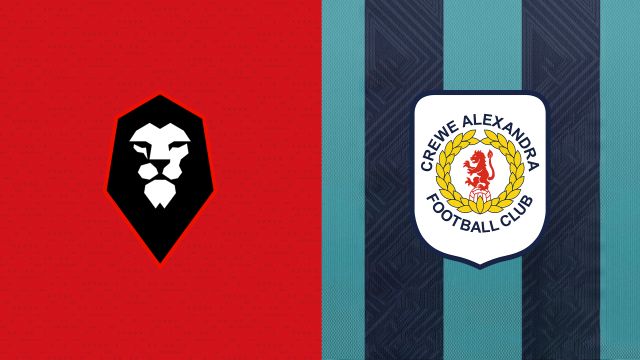 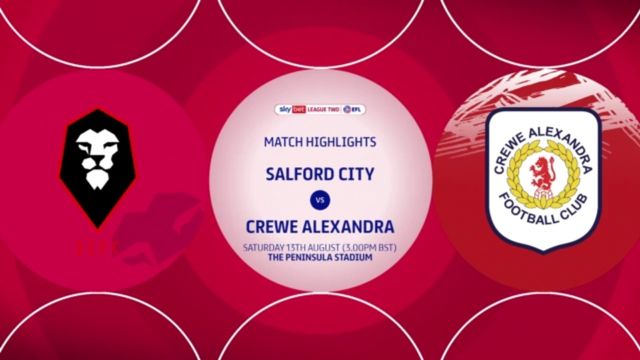 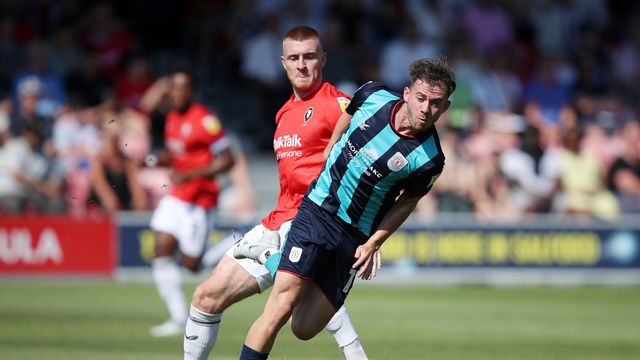