Crewe Alexandra head to Leyton Orient with fire in their bellies having been denied any points against Cambridge at the weekend.

Crewe have still won five of the first eight games this season despite Saturday's injustice & head to the O's full of confidence.

As a supporter, if you can't make the trip to East London, then the match is the third one this season that will be live streamed on iFollow the Alex - meaning you can watch the game on your laptop, tablet or mobile phone. Click here for more information.

Orient have enjoyed a mixed start to the season. Their league record reads won two, drew three, lost three - but does include an impressive draw at high-flying Exter City on Saturday.

New signings Lee Angol & Josh Wright have started the season well and have been amongst the goals so will need to be handled carefully at Brisbane Road.

Crewe last visited Orient in 2016 and won 2-0 thanks to goals from George Cooper and Harry Davis. The O's were relegated to the National League that season.

Whether you're going to the game in person or watching on iFollow - it's certainly not one you'll want to miss!

Crewe: Paul Green will miss the trip to East London through suspension having been dismissed against Cambridge on Saturday.

That could hand a chance to one of James Jones, Oli Finney or Callum Ainley to come in as a like-for-like replacement, or Dave Artell may choose to switch to another formation.

Owen Dale & Chuma Anene are both pushing for starts after impressive cameo's from the bench against Cambridge.

Tune in to the Alex twitter, @crewealexfc, at 6:45pm for the breaking team news.

Leyton Orient: Manager Ross Embleton could go with the same eleven who recorded an impressive point away at Exeter on Saturday.

It would've been three points too, but for an injury time Grecians equaliser, and Orient were impressive in Devon.

They picked up six yellow cards, but no injuries or suspensions from the clash so Josh Wright & Lee Angol remain the danger men in the O's side. 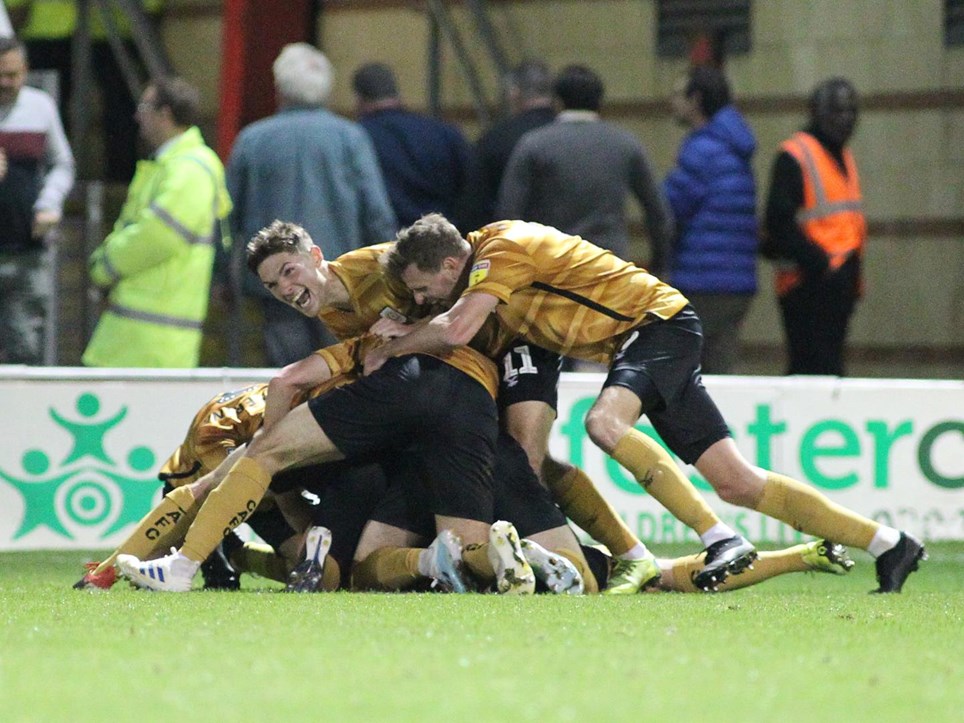 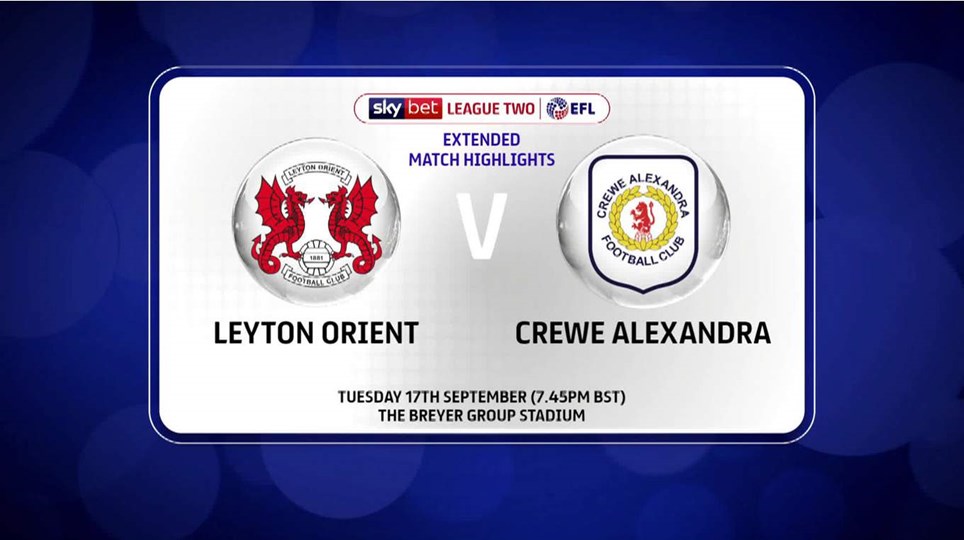 James Jones scored a dramatic late winner as Crewe Alex battled to a fourth away win of the season to run out 2-1 victors at Leyton Orient.

Eddie Nolan put Crewe ahead half an hour in but Jordan Maguire-Drew equalised before half-time. Will Jaaskelainen saved a second half penalty before Jones stole the show.

David Artell made two changes to the side that lost at home to Cambridge United, opting to replace Olly Lancashire with Nicky Hunt, whilst also bringing in James Jones for the suspended Paul Green.

The O’s came out the traps the quicker & were pressing Crewe high up the field, creating two chances inside the opening five minutes.

Lee Angol, who was forced off injured a short while later, raced away down the right to break into the box & thumped an effort high & wide of the near post before Dale Gorman struck an effort from 25-yards that never troubled Will Jaaskelainen.

After an initial ropey ten minutes, the Alex began to gain control & confidence & came within inches of opening the scoring with 29 minutes on the clock. Perry Ng curled a ball over the top for Daniel Powell to race onto. The clever ball beat the defender to allow Powell through & his shot beat the goalkeeper, but struck the angle of post & bar & rebounded into the hands of a fortunate Dean Brill.

Straight up the other end & it was the O’s testing Jaaskelainen. Harry Pickering did well to break up the play but the ball fell to Louis Dennis 25-yards out to shoot left-footed first time, but Will got down to his left to save & hold on with substitute Conor Wilkinson ready to feed on scraps.

But the opening goal did arrive just two minutes later & it came the way of the Alex. A corner kick on the left found its way over to the right hand-side to Lowery. He put an inswinging cross over & Powell flicked on a header for Nolan to stab low into the corner from six-yards.

That looked to be that for the first period, but a 42nd minute misplaced pass by goalscorer Nolan in the defensive third allowed Maguire-Drew to race in on goal & he finished well past the onrushing Jaaskelainen to level things up 1-1 at the break.

After a quiet start to the second period for both teams, Crewe gifted Orient the opportunity to take the lead from the penalty spot when Nicky Hunt tripped Josh Wright to give-up the 58th minute opportunity.

Maguire-Drew stepped up in the hope of notching his second of the game, but Jaaskelainen guessed right, diving to his left to not only save the spot-kick, but hold on to the ball & alleviate all the pressure.

Orient continued to enjoy most of the ball after the missed penalty without really testing Jaaskelainen again, but the tide turned inside the final 15 minutes.

With 78 on the clock, Ng got down to the right by-line & pulled back for Jones to strike but Brill made a superb save, with Jones turning creator just seconds later slipping in Chris Porter for a one-on-one. His shot was superbly saved again by Brill, tipping the effort onto the post as Crewe found their feet.

The Railwaymen really went for it inside the final five minutes, Jones almost scoring the winner on 89 when Porter raced down the left & got the better of defender Marvin Ekpitea to pass across the face, with Jonah have to stretch & prod narrowly wide.

It looked as if both teams would have to settle for a point – a first draw for Crewe since March – but Jones popped up in the right place again as the clock struck 90 to seal a dramatic fourth away victory of the season from five games.

It was Owen Dale down the left this time who got away from Nolan’s ball over the top & he fired over a low cross that was poked into the path of Jones by Ekpitea & the Alex midfielder smashed his low shot into the net to send the traveling fans into raptures.

The Alex defended out the five minutes of injury time professionally without Orient having a sniff to ensure all three points and a move to second in the Sky Bet League Two table.

Tickets are on sale for the midweek away trip to Leyton Orient on Tuesday 17 September, 7:45pm kick-off.

TICKETS CAN NOW ONLY BE PURCHASED FROM THE LEYTON ORIENT STADIUM.

Match tickets are on sale from Crewe Alex until 5pm on Monday 16 September. Subject to availability.

Official coach travel is also available to purchase online (£21/£22) - departing from the Alexandra Stadium at 1:30pm.

Can't make it to the game? The match will be streamed live to watch live for both a UK & international audience. Click here to purchase a match pass.

*This category also applies to students, unemployed, and current employees of the armed forces or emergency services  - ID required

Tickets will be on sale until 5:00pm on Monday 16 September, subject to availability.

Official coaches depart from Gresty Road at 1:30pm and are priced at:

Click here to check out the Leyton Orient guide on https://www.awaygames.co.uk