Crewe Alexandra are hoping to make their best start to the season for 70 years against Cambridge United at Gresty Road tomorrow.

They're already enjoying the best opening since the mid-90s, but if David Artell's side record all three points against the U's then it will beat the previous record stretching back to the 1949-50 campaign.

But Cambridge represent the archetypal banana skin - and not just because of their yellow shirts. The U's have lost their last five games in all competitions & in years gone by, this is exactly the kind of game the Alex normally slip up in.

David Artell's side seem to be made of sterner stuff this season though, already winning three matches away from home this campaign when there were just four during the entire 2018/19 campaign.

Colin Calderwood's side made an unbeaten start to the season, drawing three & winning two of their first five in all competitions, but the league record now reads two wins, two draws & three defeats with the U's residing in the bottom half.

Come along to Gresty Road & see what all the fuss is about and hopefully be part of history!

Crewe: Will Jaaskelainen is available available after returning from a successful international break with Finland Under 21s, but Dave Richards may keep his spot in goal after saving a penalty & keeping a clean sheet at Grimsby last weekend.

There are not thought to be any serious injury concerns in the squad with the players enjoying a rest week ahead of this next fixture.

Aside from the goalkeeping department, Dave Artell could stick with the same ten outfield players that have won the last two league games against Bradford & Grimsby.

Cambridge: Kyle Knoyle could return having missed the majority of the season so far with a shoulder injury, but fellow full-back Dan Jones is still unavailable with a broken foot.

The U's have signed free agent defender Elliott Ward in time for the game & he could go straight into the side for the trip to Crewe.

Jack Roles & Reggie Lambe return to the squad having been away with Cyprus & Bermuda on international duty. 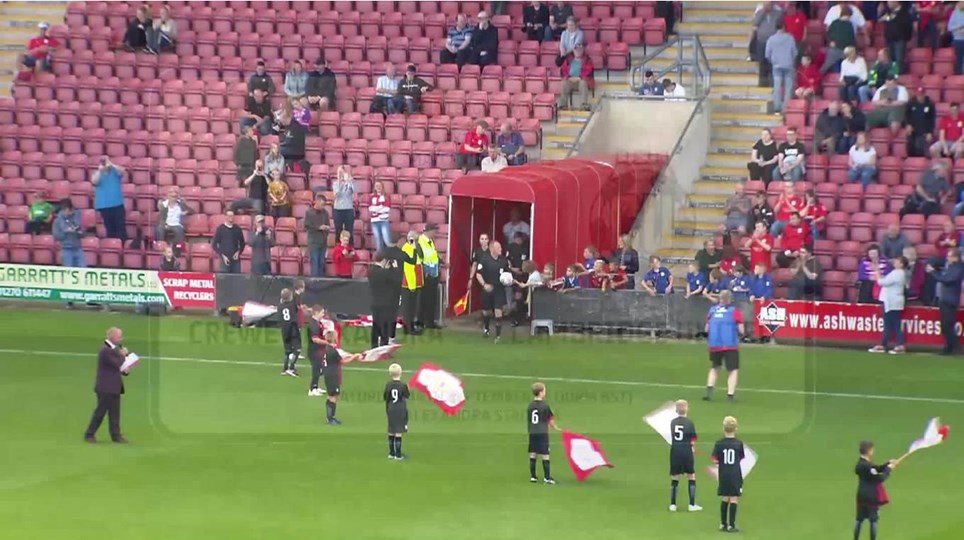 The official awarded the U's a hugely questionable penalty with the scores tied at 2-2 to effectively hand the visitors all three points, having already brandished a first half red card to Crewe's Paul Green & made several other debatable decisions.

Quickfire goals from Eddie Nolan & a first in an Alex shirt for Chuma Anene had put ten man Crewe 2-1 up, but a Paul Lewis header & Sam Smith's penalty sealed all three points for the visitors.

Tommy Lowery had the first real chance of the game in the 12th minute. Ryan Wintle sprayed cross-field ball to Charlie Kirk was sublime & he rolled the ball along the 18-yard line for Porter. Chris dummied to allow Lowery to arrive & strike a low left footed effort which Mitov saved down to his left.

Straight up the other end from that opportunity & Cambridge had the lead with their first real foray into the Alex final third. Sam Smith pinned Olly Lancashire on the edge of the box & turned him to break free. Now one-on-one with Jaaskelainen, he gave Will the eyes & confidently stroked the ball into the corner for 1-0 to the visitors.

Crewe looked to hit back immediately& won a free-kick in dangerous territory just after the restart. Harry Pickering curled the attempt over the wall but goalkeeper Dimitar Mitov got across his goal to tip the effort over the top.

But that was pretty much that for goalscoring attempts by Crewe thereafter in the half, Cambridge putting some neat passages of play together having been buoyed by their goal, new signing Elliott Ward looping a header over from a free-kick in the 37th minute.

Dave Artell would’ve wanted the half to end as soon as possible to get all his troops in the dressing room ready to re-group for the second period – but he was one man missing at the interval.

Paul Green was shown a straight red card by referee David Rock four minutes before the whistle for a high challenge on Samir Carruthers on the far side in front of the visiting away supporters, leaving it all to do for the Alex with ten men in the second period.

It was a challenge the Alex rose to with great affect, with Owen Dale & Chuma Anene being introduced from the substitutes bench early in the period to great affect.

Ng slotted a 61st minute through ball to Anene, with the Norwegian striker powering away from the defender before hitting a shot that was well saved by Mitov.

A minute later, Crewe had Will Jaaskelainen to thank for keeping the score to one, coming out quick off his line to make a sliding tackle on the onrushing Sam Smith after an unfortunate Ng slip allowed the striker a run on goal.

And that important stop paid off almost immediately - just a minute later in fact. Tommy Lowery's corner was flicked on at the near post & Eddie Nolan was on hand to stab home the equaliser from inside the six yard box.

That joy turned to ecstasy just four minutes later when the ten men of the Alex hit the front. Chuma Anene notched his first goal for the Club, confidently controlling & caressing a shot into the corner from Kirk's first time cross after Pickering's inch perfect pass.

But that joy was short-lived as the U's hit back for 2-2 just two minutes later with 69 on the clock. A cross came in from the right & Paul Lewis was unmarked in the box to plant a header in off the post.

A crazy ten minutes was complete in the 73rd minute when Smith scored his second of the afternoon for Cambridge from the penalty spot in what was one of the more controversial moments witnessed at Gresty Road in recent years.

Perry Ng looked to have made a superb sliding challenge to rob Luke Hannant of possession inside the box, but referee David Rock inexplicably pointed to the spot & essentially handed the U's all three points.

Crewe pressed for an equaliser & gave it all in the final 15 minutes to create openings, but the ten men couldn't find another way through & Cambridge United left the Alexandra Stadium with the victory.

Watch below, David Artell's post-match thoughts for free on YouTube

Tickets are on sale for Crewe Alexandra's Sky Bet League Two fixture with Cambridge United at the Alexandra Stadium on Saturday 14 September.

The U's have enjoyed a mixed start to the season with a splattering of wins, draws & defeats across their opening sequence of games.

Crewe have won two of three League Two games on home turf so far this campaign & will be eager to make it another against a side they beat comfortably 2-0 at Gresty Road last season.