Crewe Alexandra welcome top of the Sky Bet League Two table Exeter City to the Alexandra Stadium tomorrow, as both sides will be looking to claim all three points come 3 o’clock Saturday afternoon.

The Alex head into this clash off the back of a 1-1 draw to Cheltenham Town despite going down to 10-men in the second half, whilst the Grecians suffered their first defeat of the season to Grimsby Town at St. James Park.

Crewe: The Railwaymen will head into this fixture without club captain Perry Ng, but will be boosted by the return of Paul Green, who has served his three-match suspension.

Exeter City: Matt Taylor men will be without former Crewe Alex striker Nicky Ajose, who is scheduled to have an operation. With no other major team news coming out of the Grecians camp. 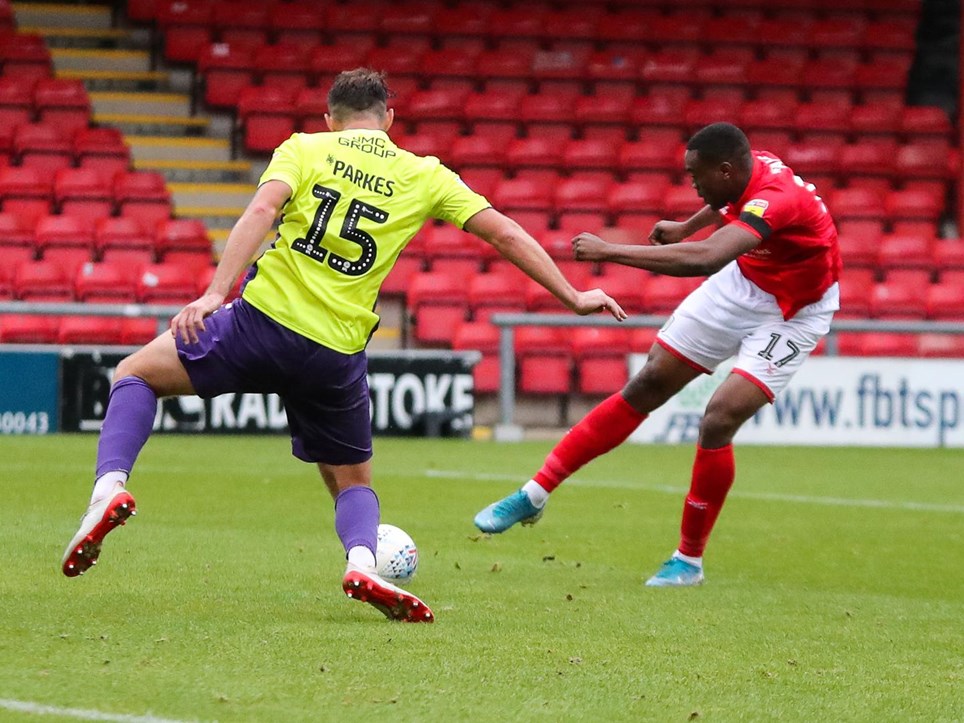 Honours even as Crewe acquire a deserved point against Exeter.

Crewe Alexandra substitute Chuma Anene hit a deserved equaliser as the Railwaymen yet again had to come back from conceding an early goal. Anene rifled home past Lewis Ward in the Exeter City goal after a Harry Pickering cross had eventually dropped to him in the 76th minute. His wonderful finis gave us a share of the points but sees us drop to 4th in a competitive division.

It was no more than Crewe had deserved after lifting their performance in the second half. Matt Taylor’s side were superior in the first period but with the only one goal in it, Crewe were not out of the contest.

Dean Moxey had given Exeter an early lead from a short corner routine in the second minute and shaded that first half, but David Artell’s side rose to the occasion in the second half and it was the Grecians holding on for the point at the end.

A draw was a fair result in the end but Crewe will be left frustrated by our slow start.

With captain Perry Ng suspended, David Artell was forced into a reshuffle in defence. Utility man Nicky Hunt switched to right-back in Ng’s absence and that meant a recall for Olly Lancashire in the centre of defence. Ryan Wintle was handed the honour of captain.

Midfielder Paul Green returned from his own three-match suspension but he had to settle for a place on the substitutes’ bench with James Jones retaining his place.

There was also a recall for winger Owen Dale ahead of Daniel Powell. Travis Johnson was named as the defender on the bench.

Ahead of kick off there was a rousing one minute applause in remembrance of director David Rowlinson, who sadly passed away earlier this week.

Not for the first time this season, Crewe were caught napping again in the opening minutes. Nicky Hunt was called upon to block a close range effort from Ryan Bowman and we didn’t switch on either from the resulting corner. Exeter took a quick one and Archie Collins arrowed a cross to the far post and with Crewe not organised, defender Dean Moxey raced in to fire a shot into the roof of our net. There was barely two minutes on the clock and Crewe’s slow start to the proceedings had been severely punished.

With the comfort of the opening goal, Matt Taylor’s Exeter City side continued to press and be on the front foot. Tom Lowery had to be well placed to take the ball off the foot of Jake Taylor just as he pulled his foot back to shoot.

Owen Dale looked Crewe’s most threatening player in the early passages. The winger skipped past Collins and Moxey had to race over to cover the ensuing danger. James Jones then found Dale with a superb through ball but he wanted an extra touch inside the box and ran out of room.

Dale was also involved in Crewe’s first shot at Lewis Ward’s goal. He played a neat one-two wit Joens to win a corner and after we took our own quick one, Lowery fired straight at the Exeter goalkeeper from the edge of the box.

James Jones was a relieved man to see his goalkeeper Will Jaaskelainen race from his line to avert the danger from his underhit back pass. Randell Williams had read it perfectly to latch onto the loose ball but so had the young Crewe goalkeeper and he did well to save with his legs.

Exeter City were always a major threat from corners and Porter had to clear another dangerous corner going into our box. Bowman also flicked a header wide from a Jack Sparkles cross. It was a genuine chance.

Pickering also did exceeding well to deny Lee Martin inside the six-yard box and Bowman shot wastefully over after yet another corner dropped invitingly to him.

Good build up play involving Pickering and Kirk resulted in Jones shooting wide of the target. Crewe were just lacking that quality in the final ball and we were more wasteful in possession than we have been for much of the season. Exeter deserve credit for that because their work ethic and pressing made things difficult for us.

Under pressure from Lancashire, Bowman could only screw a low shot into the gloves of Jaaskelainen and the Crewe goalkeeper also had to push a shot away from Lee Martin.

As the first half drew to a close, Kirk fired over after shifting his feet superbly well inside the box and a wicked cross from Pickering whizzed past everyone as Crewe pushed for an equaliser before the break.

Crewe had to raise their game in the second half and to their credit they did. Tom Lowery began to get on the ball a lot more and that allowed Kirk to have more of an influence for the Railwamen. He, Pickering and Lowery began to combine a lot better down the left hand side.

Porter nicked possession from an Exeter throw-in to fee Dale but the winger could only fire into the side netting.

That was Dale’s final contribution as Artell introduced Daniel Powell soon after.

Crewe conjured up their best opportunity to draw level after Jones had fed Pickering in behind and his shot across goal was pushed by an alert Ward. That chance increased the volume inside the Alexandra Stadium and we began to be inside the Exeter half of the pitch a lot more than we were in the first half.

A good cross from Kirk was just too deep to reach Porter before the boss made a double change with Porter and Jones replaced by Anene and Green.

Powell, who was a threat down the right hand side, bulldozed his way through a couple of challenges and Lowery’s follow up shot was saved by Ward.

The volume went up yet again and Crewe finally got their reward with 14 minutes left. A deep cross from Pickering dropped at the feet of Anene and after his swift turn he fired powerfully past a static Ward for his second goal in English football. The roof came off the place.

Now it was Crewe looking the most likely to go on to win it. A positive run from Nolan nearly fed Chuma Anene through the middle and Powell, who did really well when he came on poked another effort a yard wide after another forceful run.

With the minutes ticking away, it was Exeter wanting the final whistle but Law fired high and wide before Crewe had a late call for a penalty when Lowery’s cross appeared to hit Aaron Martin’s arm. It would have been a little harsh but you have seen them given.

Tickets are on sale for Crewe Alexandra's titanic top of the table Sky Bet League Two fixture with Exeter City at the Alexandra Stadium on Saturday 5 October.

The two sides are locked together joint top of the division on 22 points, with the Grecians occupying top spot having a +1 better goal difference than the Alex.

Games at this level don't get any bigger with the victors set to enjoy breathing space at the summit of the division. The match takes place at Gresty Road and it's certainly not one to miss!