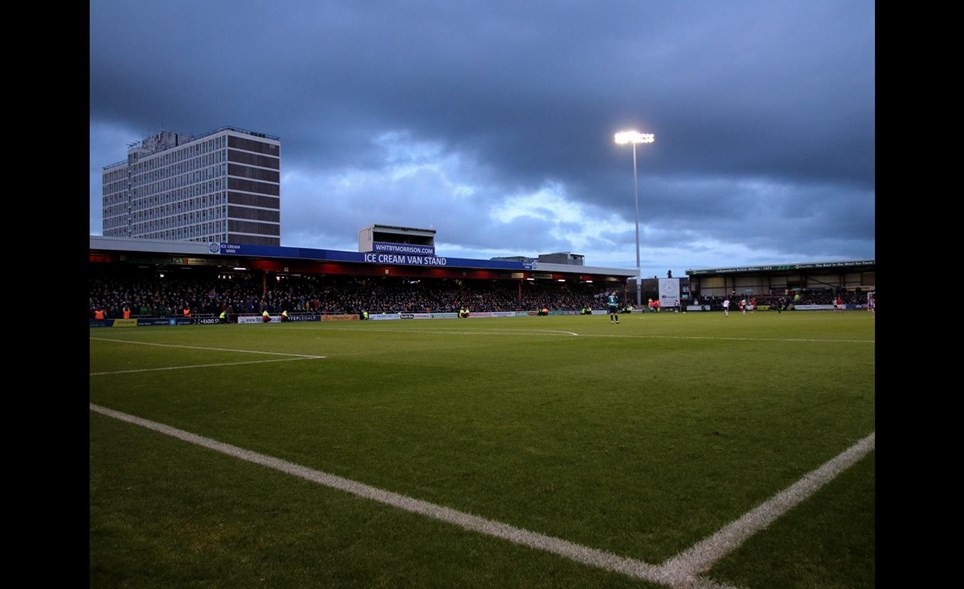 Port Vale won the first local derby of the season thanks to Jake Taylor’s close range finish just after the hour mark following a scramble at a corner. It was Port Vale’s third successive win against the Alex after winning 1-0 twice against us last season. The home defeat leaves us in fourth place in League Two.

John Askey’s side forced home the only goal of the game and Crewe’s best chance of salvaging a point was denied thanks to Scott Brown’s save from a Chris Porter header in the second half.

Over the course of a tense and tight 90 minutes, the visitors conjured up the better of the opportunities with David Amoo heading over from a fantastic position and substitute Tom Pope denied a goal thanks to a stunning one handed save from Will Jaaskelainen. The Alex keeper somehow got a strong hand on his header to take it up and onto the crossbar.

Crewe huffed and puffed and enjoyed the majority of the possession in the second half but we didn’t test Brown in the Vale goal not nearly enough. In the last half an hour after Taylor’s scrambled winner, Crewe went a touch longer looking for Porter and sub Chuma Anene and went away from playing our normal passing game.

Port Vale deserve credit for their game plan but Crewe would be bitterly disappointed to concede from a corner routine and in the process end our nine game unbeaten run.

David Artell made one change to the side that drew 0-0 with Colchester United.

Callum Ainley, who has performed admirably in recent weeks as an impact substitute was handed his first league start of the season ahead of Owen Dale.

The former Crewe Alexandra forward, Tom Pope, started on the bench for the visitors.

Both sets of supporters impeccably observed a minute of silence during the playing of the ‘Last Post’ before a bumper crowd roared into action.

The 82nd derby between the two sides, was full of tussles all over the pitch, none more so than Nicky Hunt up against Port Vale striker Richard Bennett. That continued throughout the game.

Port Vale forced the issue in the early exchanges forcing a succession of corners. Pickering had to be well placed to avert the potential danger behind him with David Amoo lurking. Porter also had to raise highest to clear another corner coming in. In the 8th minute, the Valiants had their best chance of the first period via a corner. Paul Green was positioned superbly to clear a header clear from Bennett off the line.

In response, Crewe soon settled into it and an accurate cross from Kirk had to headed clear by Legge with Porter trying to steal in behind him. After the ball rebounded back to him, his second cross evaded everyone to smack the foot of the Port Vale post. Everyone stood pretty motionless but it would have been an unintended fluke.

Moments later, Porter did well to win a flick on and find Ainley. The ball just got caught under his feet as he tried to slide the ball through to Kirk.

The two Academy graduates then combined again on the left, and Kirk whipped one just wide, although Scott Brown would have had it covered. It was worth the effort though and didn’t quite come around enough.

Port Vale were prepared to load the box, and winger Worrell won a header at the far post that presented danger across our six-yard box but Pickering was well positioned to clear. Will Jaaskelainen also confidently came and punched and collected a couple.

More good approach play from Ainley saw him release Lowery down the right hand side and Porter couldn’t just apply a decisive touch to take it goalwards. Crewe’s leading scorer also had a low shot blocked following a forceful run from skipper Perry Ng. Ng had to win a tackle with Legge just inside the Port Vale box and on the turn, Porter had his shot blocked by Nathan Smith.

Tom Lowery also had a shot blocked after Ainley did brilliantly to evade the intentions of the physical Montano. Things looked like occurring down Ainley’s side of the pitch.

Vale’s genuine chances were limited in the first half but Cristian Montano slashed one wide from another corner.

A fairly even first half ended with Lowery winning a free-kick in a dangerous position but Pickering struck a stubborn Vale wall of white and black and his follow up effort was also blocked. A tight, tense affair remained goalless at the interval.

Crewe upped the tempo at the beginning of the second half and dominated the possession but Vale continued to fall into shape and make things difficult. The noise level increased and it was a fabulous atmosphere.

Green threw himself at a Kirk cross at the far post and Ng had another free-kick blocked some 22 yards out. Porter also teed up Wintle, who’s fierce drive was blocked by Nathan Smith. Vale were standing firm.

With Crewe on top and looking the more likely to break the deadlock, Port Vale swapped Tom Pope for Bennett and soon after Vale took the lead. A deflected shot from Scott Burgess spun for another corner. Worrell took it and after one almighty scramble, Smith's frist header struck the post and Taylor was there to force in the rebound.

Crewe had to come back and again from 1-0 down and on this occasion it didn’t happen for us. Owen Dale added some pace and zest down the right for Ainley, especially when Montano was forced off with an injury and had to be replaced by Evans.

Nicky Hunt looped a header into the air and goawards that was comfortably collected by Brown before Porter headed over from a super cross from Wintle from the right.

Pope got away from his marker, Anene far too easily to head goalwards but Jaaskelainen produced a stunning one handed save to turn it on to the crossbar. It was a wonderful save that at that stage kept Crewe in the contest.

Anene held off Smith soon after inside the Port Vale box and he laid it off to Ng but again his shot was blocked. Vale continued to put bodies on the line and frustrate Crewe –but they were mainly half chances.

With time running out, Jones replaced Lowery In search of an equaliser with that best chance seeing Porter’s header kept out at the far post by Brown. The Port Vale goalkeeper was assured all afternoon and Legge and Smith stood firm.

Winger Amoo had another good opportunity to put Port Vale further ahead with a free header but he didn’t quite get his bearings right and he send his free header wastefully over the top of the crossbar. It was a let off for the Railwaymen.

Crewe continued to press in the five minutes of stoppage time but that genuine chance never materialised and Port Vale used their experience to see the clock run down for their second successive away win after winning at Bradford last time out away.

Tickets are on sale for Crewe Alexandra's derby clash with Port Vale at the Alexandra Stadium on Saturday 2 November.

The Alex are sitting on top of the Sky Bet League Two table, with the visitors currently in 11th place.

Saturday's fixture away to Forest Green Rovers was postponed, but Port Vale were held to a goalless draw at home to Oldam Athletic over the weekend.

Matchday ticket prices have been frozen, with member rates continuing to offer Crewe Alex supporters the best value for money after that of a season ticket. Click here for information on becoming a member.

PLEASE BUY IN ADVANCE IF POSSIBLE, we've experienced extremely heavy queues in the hour running up to kick-off on matchday.