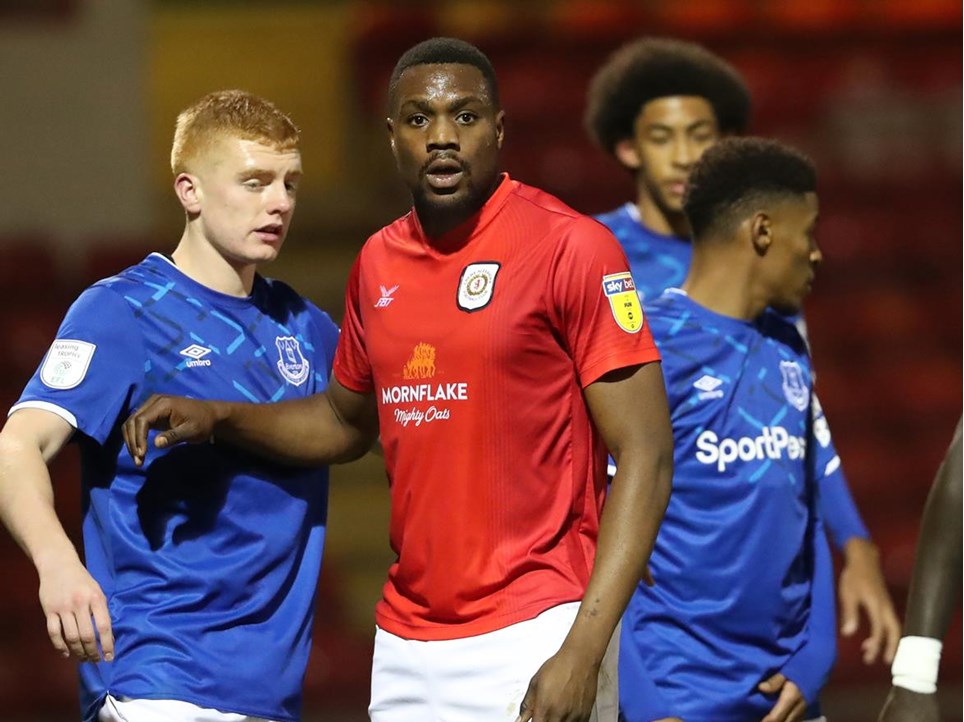 Crewe missed out on qualifying for the knockout stages of the Leasing.com Trophy after Everton punished two mistakes through their £13.5 million hitman Oumar Niasse but we stayed in the tie and fought back twice to earn a 2-2 draw thanks to first goals of the season from Callum Ainley and Owen Dale. Crewe needed to win by two clear goals but couldn’t quite nudge ahead and following the point, it went to another penalty shoot-out which Crewe won 5-4 with Perry Ng scoring the decisive spot-kick.

For our final group stage game of the Leasing.com Trophy, David Artell used the opportunity to play some of his fringe contingent for the visit of the Everton youngsters. New signing Christian Mbulu has handed his debut for the club after completing the move as a free agent last week. The centre-half partnered Eddie Nolan at the back, with veteran Nicky Hunt granted a complete rest.

Dave Richards was given the number one spot after also starting against Burton Albion and Mansfield Town in previous EFL Trophy games.

The experienced Paul Green and Chris Porter also sat this one out with James Jones and Chuma Anene given opportunities to impress and stake their claim for more starts in the league campaign. Charlie Kirk was also on the substitutes’ bench with Owen Dale recalled to the starting line-up after he was left out against Port Vale in favour of Callum Ainley.

With Crewe having to win the tie by two clear goals or rely on a particular result from Mansfield Town in their final game against Burton Albion next week, Artell’s side tried to get on the front foot swiftly at Gresty Road but it was the visitors who took the real initiative to take the lead after just three minutes.

Everton pressurised the Alex into losing possession as we tried to play out from the back and Oumar Niasse took full advantage by unleashing a shot from 20 yards. His powerful drive took a nick off the boot of Eddie Nolan and although Richards got a hand to it, he couldn’t keep it out.

Crewe now needed three goals and to our credit we almost instantly hit back with Anene hitting the crossbar with a header from a Harry Pickering corner.

Niasse, the experienced 29-year-old was a constant threat with his pace and he linked up intelligently with the clever Harry Charlsley to cause the Crewe back line defence. Niasse, shot wide after a swift counter attack and Richards did really well to smother at the feet of Charlsley.

Perry Ng lifted a dangerous cross just past the far post and Anene couldn’t direct a long ball on target after stealing some space in behind.

Crewe continued to press trying to get back into the tie and Ainley showed intent with a really purposeful run that saw him hold off the towering Tyler Onyango but he was just crowded out at the end.

Dale then saw him presented with an opening after a clever run but after pulling down Pickering’s searching pass his volleyed effort was blocked before it tested Harry Tyler in the Everton goal.

Wintle whistled an ambitious effort just wide of the target before Ainley equalised with two minutes of the first half remaining. The creative midfielder, who had been trying to drive Crewe forward all evening, collected a pass on the half turn and dispatched an arrowed drive past Tyler for his first goal of the season.

Crewe were on top possession wise heading into the interval and Baningime was booked for a tackle from behind on Lowery as Crewe threatened to launch another attack.

Niasse’s quickness led Mbulu to be sent off for catching him before Ainley shot a yard wide after he picked up a good central position. Nolan also went close at a corner but was just denied by a longer Everton boot. The Irishman then made a superb block to deny Charlsley. Lowery had a shot blocked after a wicked corner was cleared from underneath the Everton crossbar.

Crewe then lost Eddie Nolan through injury. The defender tried to run it off but was forced off and was replaced by Oli Finney. Wintle slipped back into the back four.

The switch had barely past 60 seconds before Crewe were caught out by a long ball and flick on and Niasse raced in and finished confidently past Richards for 2-1. It was a wonderful touch that saw him race in between.

Crewe needed three goals again and that was always going to be tricky when we conceded two soft goals.

The Railwaymen performed well though and kept themselves going. Jones fired wide of the mark before Dale was in the right place to tap home from close range after Ng had found Ainley once againand he got another shot off.

Dale shot wide from a Pickering corner as Crewe tried to find a late winner but we couldn’t find one. A 2-2 draw meant another penalty shoot-out for the Alex and after Richards again produced to save from Ryan Astley, it was down to captain Perry Ng to secure a 5-4 win from the spot.

Crewe Alexandra take on Everton Under 21s in the final group stage match of the 2019/20 Leasing.com Trophy (EFL Trophy) in November.

The match takes place at The Alexandra Stadium on Wednesday 6 November 2019 - kick-off is at 7:30pm.

If you can't make the match in person, the game is available to watch on iFollow for both a UK & international audience. Matches passes will be available to purchase in the coming weeks.