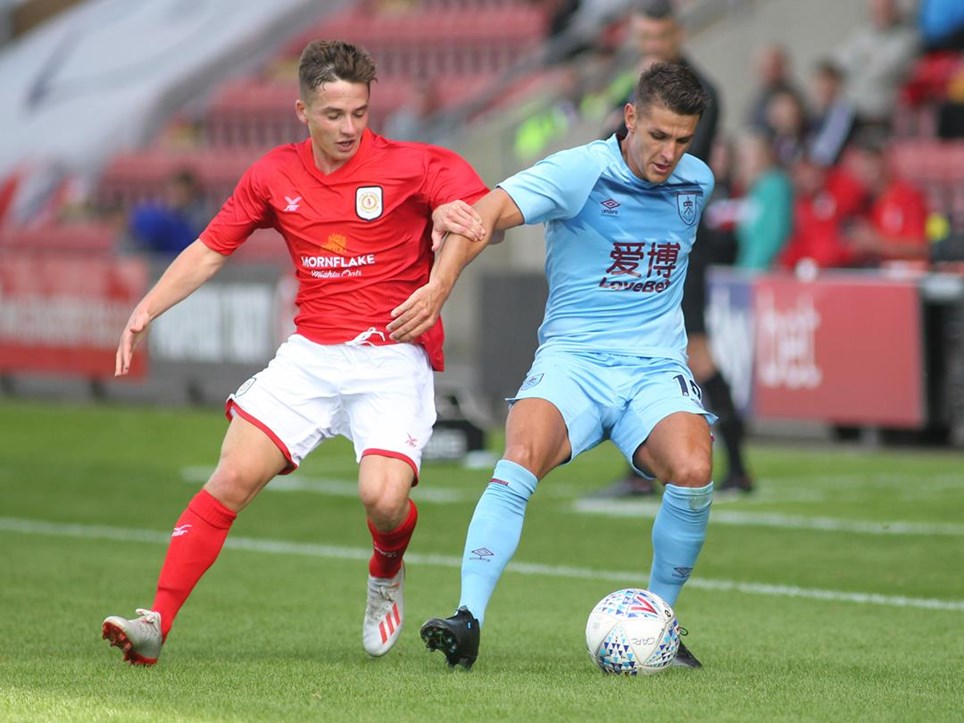 A well taken finish from Charlie Kirk gave Crewe Alexandra a well deserved 1-0 win over a Burnley XI this afternoon. Kirk tucked home his finish past Nick Pope in the 22nd minute and over the 90 minutes we conjured up the better of the chances with James Jones hitting a late free kick straight at Pope and Chris Porter firing straight at the Burnley stopper in the first half.

Charlie Kirk also forced Pope into another smart save after being picked out superbly at the far post by Perry Ng.

Crewe Alexandra welcomed back Chris Porter from injury and defender Nicky Hunt made only his second appearance of pre-season. Young goalkeeper Will Jaaskelainen started and finished the game.

Crewe are further advanced in their game time than Burnley in pre-season and we made a very promising start to the proceedings. We played some neat passing in the early exchanges and a good interchange between Perry Ng and Charlie Kirk saw the winger whip over a cross that had to be collected by Pope.

Young Jaakelainen was positive coming for crosses and he also punched a corner clear before Josh Benson’s follow up effort was deflected behind for another one. He also made a fine tip over to deny Westwood a goal on his return to Crewe.

Crewe’s inventive play saw us take the lead on 22 minutes. Porter was involved using his strength to unbalance Jimmy Dunne and it raced through to Kirk, who found himself through on goal. Kirk kept his composure really well to tuck it beyond Pope and into the far corner for the opening goal.

Burnley tried to respond but their young winger, Dwight McNeil, shot high over the crossbar and Gudmundsson dragged a shot wide of the target from a good position.

Crewe had a really good opportunity to double the lead after an unfortunate slip from Josh Benson. Wintle was alert enough to nip possession from the grounded Burnley midfielder and he released Porter in enough space to get a shot off but he side footed it straight at Pope.

Tom Lowery continued to bite into the tackle as Burnley began to enjoy more of the possession without really troubling Jaaskelainen.

A good half from the Alex ended with Ng coming off the touchline and he drilled a shot straight at Pope.

The second half started with Daniel Powell having a couple of early half chances and Kirk shooting wide when you would have backed him to have at least hit the target.

Lowery’s excellent endeavour continued and his superb cross from the left hand side just evaded the run of Porter.

Crewe just needed that final ball to complete some really good build up play. Our best move on the game, saw Lowery involved again and his sweeping pass out to the right hand side found Ng. His deep cross found Kirk in his trademark far post position and he was unlucky to see his half volley test the positioning of Pope.

Burnley’s genuine chances were limited but their recent signing Rodriquez headed wide of the mark and Hunt did well to prevent the former England International going clean through.

David Artell made a couple of changes with Hunt and Green making way for Jones and Lundstram, who went to right back and Ng switched to centre-half.

Jones had a late chance from a free kick that he had won on the edge of the penalty area. He powerfully drilled through past the wall but Pope was well placed to collect it in his chest.

Burnley’s late chance of a draw fell to McNeil but his shot was deflected wide for a corner and Crewe had defended them relatively well all afternoon.

Both home & away supporters can purchase from us in advance

Tickets for Crewe Alexandra's only home pre-season friendly with Burnley on Saturday 20 July (3pm) are on sale now.

2019/20 season ticket holders can buy their reserved seat up until Friday 12 July & all tickets can be added to season ticket cards, printed at home or accessible digitally on mobile phones.

The Premier League side, who have former Alex graduate Ashley Westwood in their ranks, are sending half of their squad to Gresty Road - with the other half making its way down the A500 for a match with Port Vale at the same time.

The Clarets finished 15th in the top flight last season & face The Alex as part of their 2019/20 pre-season preparations.

Burnley supporters can also purchase tickets for the match for the away end of the stadium direct from Crewe Alexandra.

Redirect to www.eticketing.co.uk/crewealex & select tickets from the 'North Stand' from the interactive ground map - this is the away supporters section of the ground. Select the desired tickets & proceed to checkout.

Register your details & choose whether you'd like to print your tickets at home, have them stored digitally on your mobile phone (Google Pay/Apple Wallet) or collect physical tickets from the away ticket office on the day of the game (open from 12noon).

Tickets will also be available on the day of the game.