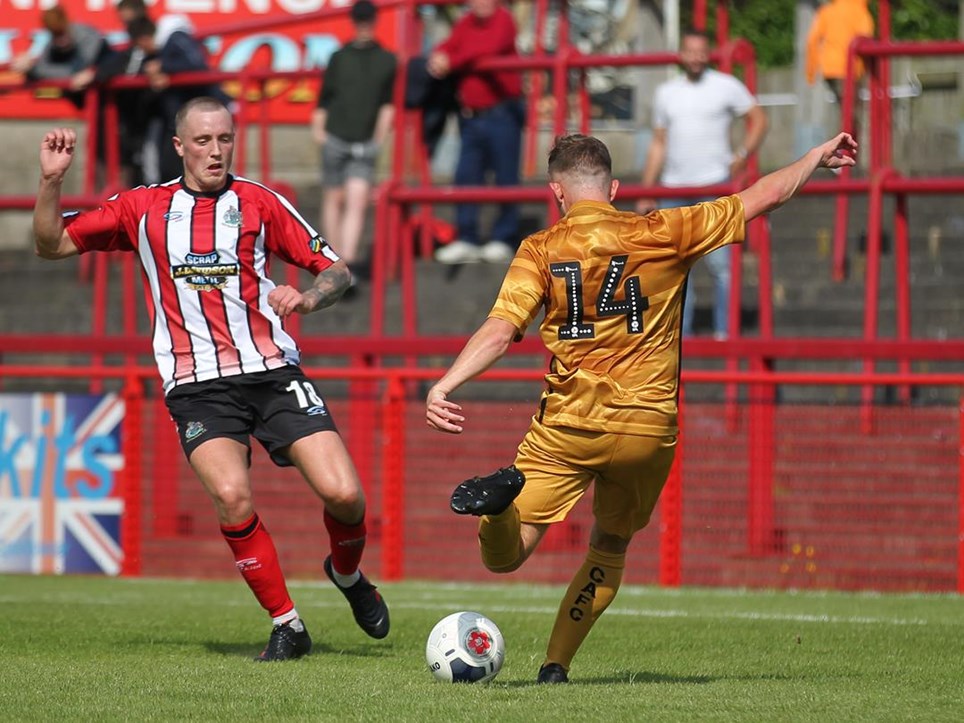 Green, Kirk (pen) and Ng all score in the first half too...

Crewe Alexandra ramped up their pre-season with a really positive outing at Altrincham this afternoon. The Alex were in the mood to create chances and threaten the opposition goal and we took the game for Alty from the off. It ended 6-0 and it could have been more in what was another useful 90 minutes as we prepare or the start of the new season.

First half goals from Paul Green, a penalty from Charlie Kirk and one from Perry Ng gave us the cushion of a 3-0 lead and we continued to be on the front foot in our second friendly of the summer.

After David Artell made 11 changes just before the hour mark, midfielder Ollie Finney did his chances of a first team start no harm whatsoever with a quick fire hat-trick. His first one should perhaps had been saved by the Altrincham keeper Tony Thompson but his other two strikes demonstrated his finishing ability.

Crewe Alexandra’s second pre-season fixture allowed boss David Artell to give most of his first team squad another sufficient run out at Moss Lane. The majority who started the game against Phil Parkinson’s Altrincham side were given an hour of playing time before they were replaced and others were introduced for the final half an hour.

Chris Porter was a late withdrawal after suffering a slight knee injury so youngster Connor Heath stepped in. New signing Olly Lancashire made his first appearance since joining us but Daniel Powell did not feature due to a sore back.

Summer trialists, centre-half Christian Mbulu and forward Paul Taylor were provided with another opportunity to impress after both being retained from the opening friendly at Nantwich.

There was certainly a greater intensity to Crewe’s play and the attacks soon flowed towards the Altrincham goal. Heath had an early header deflected behind for a corner and through balls from the lively Kirk just couldn’t be collected by Lowery and Green.

With Crewe doing most of the early attacking, the home side were reliant on the counter attack and they nearly caught us out from one of our own corners. Kirk put a shift in to get back and that allowed Ng to position himself to block from winger Nathan Arnold and Matt Chadwick could only fire wide on the rebound.

Tom Lowery went close with a powerful shot that was blocked close to the line by the face of an Altrincham defender before Crewe finally took the lead on 22 minutes. More good work down the left by Kirk and Pickering gave Green the opportunity to bend a powerful bending shot past the helpless Tony Thompson.

Veteran Green was then quickly involved again to help make it 2-0 within two minutes of his own opener. Crewe were awarded a penalty when Shaun Densmore’s last ditch tackle to prevent Green making it 2-0 caught the Alex midfielder. With Porter missing, Kirk stepped up and rolled the spot kick past Thompson with relative ease.

At the other end, Richards was hardly troubled but he had to watch a free-kick from Max Harrop sail over his crossbar.

Ng went in search of a goal of his own. He had a left foot shot after a really positive run and clever interchange of passing with Lowery and he then tried to catch the Alty goalkeeper out with an ambitious lob. He also fired a powerful drive onto the top of the netting.

Lancashire always looked assured in possession and he always looked to play out into midfield when the opportunity arose. He also made one wholehearted challenge to suggest that he was up for pre-season!

Altrincham’s Sean Williams was booked for catching the quicker Lowery and Heath was spoken too as well but escaped a yellow card.

Crewe went in 3-0 ahead at the break, Lowery’s cross was met by the head of Kirk and his powerful header hit the crossbar and Ng helped himself to the rebound for the goal he had threatened all afternoon.

The Alex continued to look for more goals and after we had won the ball back high up the pitch, Heath quickly found Lowery inside the box and he was really unlucky to see his guided shot hit the post.

There was 11 changes made by Artell just before the hour mark and those players entering the field of play wanted to add to the goal tally.

Shaun Miller fired into a plethora of legs from a corner before Finney notched his first after being found by Regan Griffiths. The keeper should have kept it out with his powerful shot really going through his grip and into the net.

Soon after Finney made it 5-0 with his second goal of the afternoon. He evaded a couple of defenders coming towards him inside a crowded box, before picking his spot for a fine finish.

He so nearly grabbed his hat-trick goal after a clever lay off from Miller but he fired against defender Jones.

At the other end of the pitch, Billy Sass Davies intercepted well to deny full-back Corbett from possibly pulling one back before Finney completed the scoring in emphatic fashion.

The midfielder was really positive with his run forward and at the end, he emphatically smashed it out of Thompson’s reach for his third goal of the game and Crewe had six goals on what proved a warm afternoon in Altrincham.

The match is The Alex's second pre-season match of the summer after the opening contest at Nantwich Town last weekend.

Crewe lost out 2-1 at Nantwich in what was a thoroughly useful fitness test after just one week back in pre-season training. The match at Moss Lane will be every bit as tough, with Alty playing a league higher than The Dabbers in the National League North.

The Alex won 3-0 at Altrincham in pre-season last summer thanks to goals from Perry Ng, Jordan Bowery & Ryan Wintle.

*Proof of full-time study must be provided

Below, watch all the goals from Saturday's defeat at Nantwich for free on YouTube