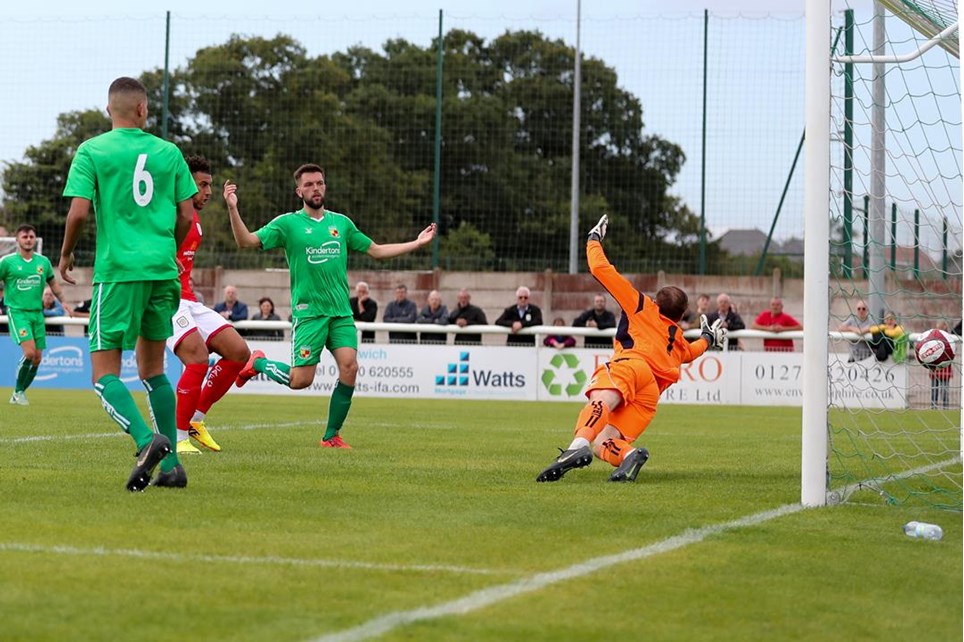 Crewe Alexandra’s pre-season campaign started with a 2-1 defeat at local neighbours Nantwich Town. David Artell will not be too pleased with the mix-up that resulted in Nantwich’s winning goal coming courtesy of a James Lawrie penalty, but he would be content in the fact that the majority of his squad were given 45 minutes each. He was also given the opportunity to run the rule over four summer trialists.

New summer signing Daniel Powell was also on target for the Railwaymen with a close range finish after good work from trialist Paul Taylor and Perry Ng.

Sean Cooke, a former trainee with the Alex had given the Dabbers the lead with a stunning strike after just 7 minutes. The midfielder’s dipping shot defeated Dave Richards to set the home side on the way to lifting the newly introduced Barry Daly Memorial Trophy.

As expected, manager David Artell, gave the majority of his squad game time against the Dabbers. The useful work out allowed 22 of his players to gain valuable playing minutes, as we build up to the big kick off on 3rd August at home to Plymouth Argyle.

Those with slight knocks or fitness concerns were not risked in the opening game of pre-season. The likes of Shaun Miller, Paul Green, Billy Sass-Davies, Lewis Reilly and Owen Dale did not feature at the Weaver Stadium. New summer signing, Olly Lancashire also did not feature.

There was also a chance for a number of summer trialists to stake their claim for a possible contract with the Football Club. The former Queens Park Rangers defender Charlie Fox and midfielder Lassana Mendes started the game with Paul Taylor and Christian Mbulu coming on at half-time.

The match between the neighbouring clubs was played out in memory of Barry Daly, who sadly passed away last month.

After some good early hold up play and release from Chris Porter, the supportive James Jones floated a cross to the far post but the in-coming winger Charlie Kirk could only prod it towards goalkeeper Greg Hall.

The first goal of pre-season went against the Alex with Dabbers midfielder Sean Cooke collecting a loose ball some 25 yards from goal. The former Crewe Academy graduate took a positive touch before lifting a perfect shot beyond the diving Richards. His precise shot dipped perfectly under the crossbar to give the Dabbers the lead after just seven minutes. It was a truly wonderful strike that drew applause from both sets of supporters.

Crewe were forced into an early change with full-back Travis Johnson forced off with an injury. First year pro Rio Adebisi replaced him.

A James Jones free-kick from the right was headed to the edge of the penalty area and a well-placed Callum Ainley made a firm connection on the volley but he couldn’t direct it goalwards and it sailed harmlessly over the crossbar.

Midfielder Ryan Wintle registered our first effort on goal with a low drive from 22 yards but it was well collected by Hall in the Nantwich goal.

At the other end Nantwich’s competitive striker Joe Malkin headed against the foot of the post but the assistant referee had already raised his flag for offside.

The home side went close again to doubling their advantage after a mix-up in the Alex midfield. Ainley and trialist Mendes went for the same ball and the ball dropped invitingly to Cooke, who instantly fed Malkin inside the box. His cross shot whistled across and just evaded Saxton coming in at the far post for a tap-in. It was a let off for Crewe.

Full-backs, Adebisi and Offord both shot harmlessly over the top of the crossbar as Crewe tried to press looking to level things up. Mendes connected with a deep cross from Wintle to head downwards but Hall was well positioned again to make a comfortable save.

Moments later, Ainley shot powerfully but straight at the Nantwich goalkeeper once again. The Railwaymen were being restricted to efforts from long range.

Before the half time interval, a short corner from the Dabbers saw Hughes pick out Cooke with a low pass but his shot was blocked as it approached the line. Crewe had nearly been caught napping at a set-piece routine.

There was a further 10 changes at the break with the Alex fans given the first glimpse of new summer signing Daniel Powell.

Tom Lowery embarked on a terrific solo run that was just ended inside the Nantwich box by Josh Langley, who did well to get his body across the midfielder.

Crewe finally drew level on 58 minutes after a well worked goal. The busy Paul Taylor swung a cross out to the right hand side to find Perry Ng in space and his drilled cross was tapped home from close range from our new summer signing from Northampton Town.

There was a late challenge on Eddie Nolan by an over eager Joe Malkin and after some brief treatment, the Irishman was able to continue. Goalscorer Sean Cooke made way for Luke Walsh for Nantwich Town.

Will Jaaskelainen had to be alert to a teasing cross going into the Crewe box but moments later he got himself in a muddle with his centre-half Eddie Nolan to gift Nantwich a penalty.

Nolan’s back header was not collected by the Crewe youngster and after it escaped his grip, he was forced to trip Malkin as he threatened to divert the loose ball into an empty net. It was a complete mix-up that should have been avoided. James Lawrie stepped up to put Nantwich 2-1 ahead as we entered the remaining eight minutes and Crewe couldn't find an equaliser with Powell again going closest with an acrobatic effort.Harry Pickering also shot just wide from distance.

With Nantwich holding on to win 2-1, it was Dabbers skipper, Caspar Hughes, being presented with the Barry Daly Trophy by his wife Judith at the climax of the game.

Crewe Alex and Nantwich Town will play for the Barry Daly Memorial Trophy today, in what is expected to become an annual tribute to the much-loved club servant who passed away last month.

The match takes place at The Weaver Stadium on Saturday 6 July with a 3pm kick-off. Tickets are on a cash on the turnstile basis & cost £8 for adults, £5 seniors & £2 juniors.

Barry, fondly known as ‘Big Baz, was a long-term member of the Gresty Road support staff and also a well-known friend of Nantwich Town over the years.

The taxi driver died aged 63 last month and star footballers from past and present were among the hundreds of people at his funeral.

Now a trophy named in his honour will be the prize for the winners of the friendly at the Weaver Stadium, with the victors holding onto the silverware until the clubs meet again.

Nantwich director of football Clive Jackson explained: “For me personally, I had a friendship with Barry which went back to our days together at Basford Hall.

“We shared many a laugh and enjoyed our football together. Although he was a Crewe Alex man, he was always a friendly face at Nantwich and a firm friend of the club.

“I can’t think of a more fitting tribute to him than for the two clubs to play for a memorial trophy in his name.

“It’ll be a lasting tribute to his memory as the intention is for it to become an annual match wherever possible.”

Barry’s wife Judith and family have been invited as special guests to the game, which will kick-off at 3pm.

Prices for the match, which is all pay-on-the-gate have been set at £8 adults, £5 seniors, £2 juniors