Since winning the first game since the competitions' reshuffle 3-0 at Accrington, the Alex lost the two following group games in 2016/17, as well as all three in last years' competition.

The first game in the Alex's group took place last week, Shrewsbury Town & Man City U21s drawing 1-1, with the Shrews picking up the bonus point after winning on p

Crewe: Dave Artell is keen to turn around the Alex's poor start on the road around - with the side yet to score a goal away from home.

In contrast, The Alex are unbeaten at home & go into the match full of confidence having dispatched of Macclesfield 3-0 on Saturday.

It's unclear how many changes the manager will make to the team for the Checkatrade Trophy match-up, with plenty of fringe players desperate for game-time.

Eddie Nolan is definitely ruled out though after picking up a calf problem on Saturday, joining Paul Green & Harry Pickering on the sidelines.

Tranmere: Zoumana Bakayogo, who left the Alex in the summer, is back in contention after injury, but Ritchie Sutton & Evan Gumbs are long term absentees for the hosts.

This is Rovers' first match in the newly reformed competition following promotion from the National League last season.

Rovers have lost just once in the league so far on their return to the EFL, winning two & drawing three.

Talisman James Norwood has notched six goals in those six games, with Alex boss Dave Artell hopeful he made 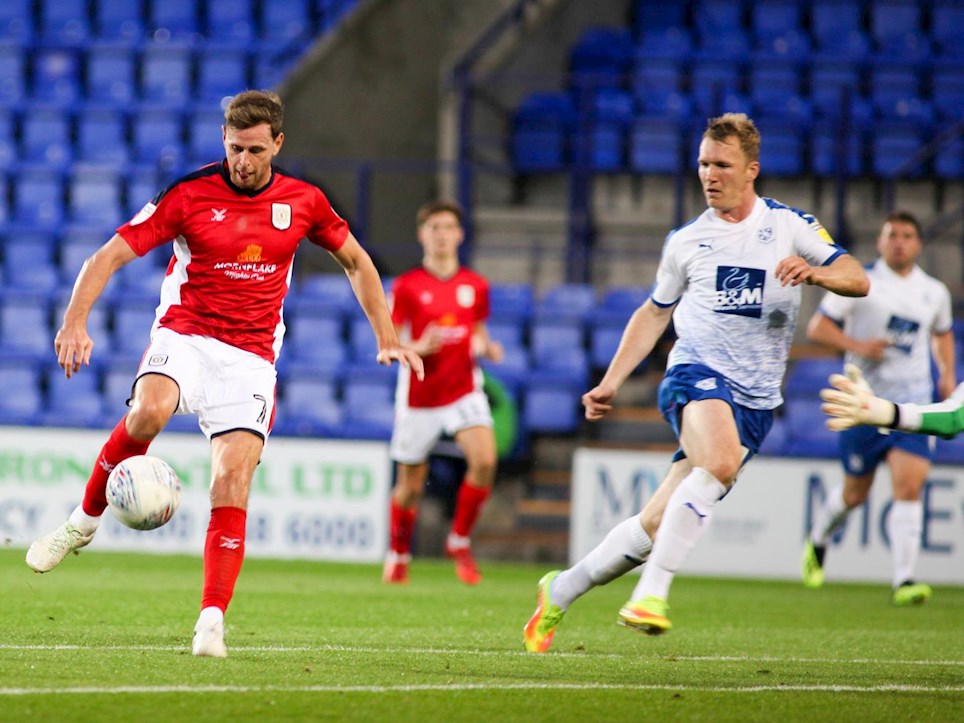 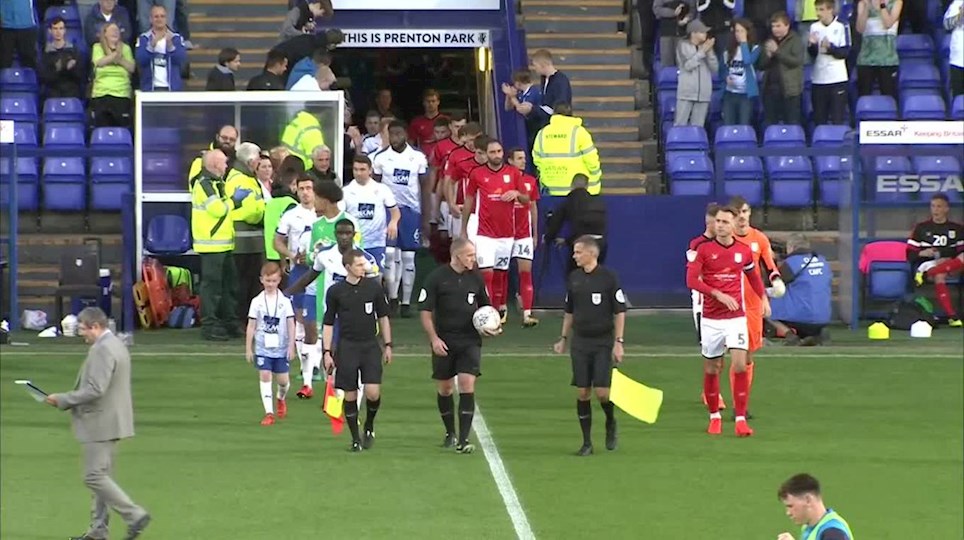 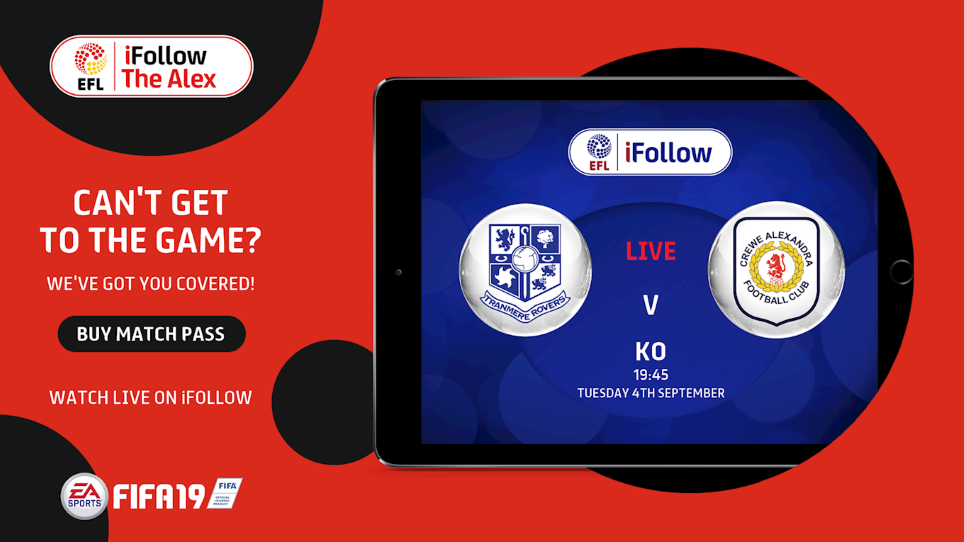 Remarkable turnaround sees Crewe recover from 3-1 down to win Checkatrade tie in the closing minutes.

Crewe Alexandra kicked off their Checkatrade Trophy Northern Section with a fantastic comeback win over Tranmere Rovers. Crewe had led 1-0 thanks to Chris Porter’s fine finish after just 20 minutes - but had led that lead slip before the half-time whistle after conceding two goals in an extended stoppage time as result of a horrible looking injury to Kevin O’Connor, who was stretched off in a neck brace.

It got worse for the Alex within a minute of the restart when some indecision inside the Crewe defence allowed Paul Mullin to waltz in to make it 3-1.

It became a tough ask for the Alex to get back into the tie from that point, but to our great credit we kept ourselves going and went close to doing so through Chris Porter before Alex Nicholl’s firm header from a free-kick made for a grandstand finish.

Crewe smelt blood and when Porter rose highest to head home a free-kick with five minutes left on the clock, there was only going to be one winner.

James Jones was the match winner with a cool finish inside the box after Callum Ainley had found him inside a crowded box. Jones placed his low finish perfectly past Shamal George to give Crewe a superb 4-3 victory in Group D.

With no league fixture this weekend due to Mansfield’s International call-ups, David Artell used the Checkatrade Trophy to issue game time to Tom Lowery, Alex Nicholls, Chris Porter and new loan signing Kevin O’Connor. Nicky Hunt started in place of the injured Eddie Nolan (calf) with Perry Ng once against deputising in the centre of defence.

Tranmere Rovers named our former left-back Zoumana Bakayogo as their captain and he helped form a back four alongside another of our former defenders Mark Ellis.

Crewe’s first venture forward saw Shaun Miller, Nicholls and Porter all combine and after squaring up to Ellis inside the penalty area, Miller won the first corner of the evening. Jones’ subsequent delivery into the box was too close to the Tranmere goalkeeper Shamal George and he collected with relative ease.

Tranmere’s first real attack came moments later with Paul Mullin just failing to reach a wicked cross at the far post. If he had been able to connect properly, it would have had Ben Garratt scrambling across his line with more urgency.

Cole Stockton curled an effort a yard or so wide of Garratt’s left hand post from outside the box before Callum Ainley did likewise for Crewe after Jones had found him in space.

In the 20th minute, Crewe took the lead through Chris Porter. The veteran forward anticipated a flick on from his strike partner Miller and he kept his composure fantastically well to timely lift his shot over the advancing George. It was also Porter’s second goal of the season following his headed goal against Morecambe on the opening day. It was our first goal on our travels this season.

A couple of minutes later, Miller, was incredibly unlucky with an ambitious lob that he took close to the by-line. After seizing possession from the slipping Bakayogo, he had spotted George slightly advanced from his line and the on-loan goalkeeper from Liverpool would have been mightily relived to see it clear his far post.

Tranmere should have drawn level on 26 minutes after Bakayogo produced a fantastic cross from the left hand side to find Mullin in behind the Crewe centre-halves, but he couldn’t quite direct his side volley on target.

Crewe produced some good football to conjure up a half chance for James Jones but he didn’t quite catch Ainley’s cut back as well as he would have wanted and Bakayogo was on hand to poke it behind for a corner.

Just after the half an hour mark, there was a considerable stoppage following a hefty collision between Kevin O’Connor and Dylan Mottley-Henry. O’Connor was motionless and he was placed in a supportive neck brace before being stretched off. The ovation he received from both sets of fans was fantastic. Michael Raynes replaced him with the versatile Ng moving to right-back and Hunt to left-back.

After play resumed after around eight minutes of stoppage time, there was a penalty shout for the home side when Mullin went down under a challenge from Hunt, but the referee was right on the spot and saw no infringement.

Ainley then found Lowery on the edge of the box but his eventual shot lacked the power to really trouble George. With the half entering 10 minutes of injury time, Raynes headed straight at George from a James Jones free-kick.

Tranmere drew level before the half time break thanks to a wonderful hit from Jay Harris. The diminutive midfielder intercepted a pass from Jones in the centre of the park before unleashing an unstoppable shot past Garratt from 25 yards.

Crewe did have the ball in the net before the interval with Porter powering a header from a corner over the line but it was ruled out for a push. It was worth another look.

Amazingly, the home side did have the ball in the net again deep into stoppage time. Mullin curled an effort from just outside the box that Garratt could only palm out into his six yard box and Cole Stockton reacted quickest to the rebound to fire into the roof of the net.

Tranmere made it 3-1 just 60 seconds into the second half but Crewe were left fuming over what they considered a foul in the build-up. Play was allowed to continue and with both Raynes and Garratt seeming to leave the ball to each other, the Tranmere forward Mullin waltzed in to slot home into an empty net.

That prompted an early change with Kirk replacing Miller. Nicholls moved up front to partner Porter. After Jones had struck a free-kick in the wall, Porter went close with a downward header from another free-kick but it bounced just the wrong side of George’s left hand post.

Crewe’s last change of the night saw Wintle replace Lowery in the centre of the park.

Tranmere made their first change with Ben Tollitt replacing Dylan Mottley-Henry. A confident Tranmere side then saw Mullin shoot just over the top of Garratt’s crossbar.

In reply, an encouraging run from Ng found Ainley out wide and his drilled cross shot saw George spill it out into his six yard box but unlike Tranmere, the rebound was played behind for a corner by Adam Buxton. Crewe continued to grow in strength and had nothing to lose.

With 18 minutes remaining, Crewe finally made one of our free-kicks count. James Jones produced a tempting cross into a crowded penalty area and Alex Nicholls directed his firm header past a helpless George. It was our lifeline back into an end-to-end encounter.

Tranmere went close to making it 4-2 but a tiring Mullin could only volley a Larnell Cole wide of the post.

The fresh legs of Kirk saw him gallop away down the left hand side but his final shot lacked the accuracy and power to really test George. The tie was evenly poised as we entered the concluding minutes and we were in it.

Mellon introduced the fresh legs of Jake Caprice for the tiring full-back Buxton. Mullin also made way for Connor Jennings, as Micky Mellon tried to hold on.

Raynes was booked for coming through the back of Mullin. He was soon joined in the referee’s notebook by Harvey Gilmour.

With five minutes left, a spirited Crewe drew level with Porter making the most of his height to beat George to another free-kick placed into the Tranmere box. Porter bravely leapt to get his head on it and it took an age for it to bounce over the line. It seemed to go in slow motion, but it was 3-3 and the swing was back with the Alex.

So much so that that just two minutes later, a resurgent Crewe went for the jugular. The two Crewe youngsters, Kirk and Ainley combined superbly and Ainely slipped the ball to Jones and he guided his low shot home for his third goal of the season. It was an unbelievable comeback but Crewe still had to see out the final stages.

Hunt did fantastically well to smash a clearance out from within the six yard box and of all people, Bakayogo had the best chance to force a penalty shoot-out but he shot his late effort wide.

There are no advance tickets available for Crewe Alexandra's Northern Group D clash in the Checkatrade Trophy at Tranmere Rovers.

Entry is permitted to supporters using the CASH TURNSTILES at Prenton Park on the night only.

The group also contains Shrewsbury Town & Manchester City U21's who drew 1-1 in their group encounter earlier this week, the Shrews picking up the extra bonus point for winning the penalty shoot-out.

There is no official supporters coach in operation for this game.

Click here to head over to the online box office for details or to purchase tickets of other Crewe Alex games.