Crewe Alexandra welcome local rivals Port Vale to the Alexandra Stadium in the hope of continuing the unbeaten start to the season at home & extending the Vales' long-standing miserable run on the road.

The contest ended 2-2 in April last season thanks to Charlie Kirk's last gasp equaliser that sparked wild celebrations in the home sections of the ground.

Crewe beat the Valiants 1-0 at Vale Park last season too, the visitors' last win against the Alex coming in April 2016.

Crewe: The Alex go into the game full of confidence having gone three games unbeaten in all competition & without having conceeded a goal in League Two at home this season.

Last time out's unspectacular 0-0 draw with Cheltenham proved a solid point on the road to build on a 4-3 Checkatrade Trophy success at Tranmere & 3-0 home crushing of Macclesfield.

Crewe continue to be without Eddie Nolan (calf), Harry Pickering (hamstring) & Paul Green (knee), but otherwise have a fully fit compliment of senior players to pick from.

Port Vale: The Vale haven't won in 16 straight away matches stretching into last season, their worst run since the early norties when they wen 19 away games without tasting success.

At home however, they've been strong this season, winning three of their four games & only conceeding two goals - they'll hope to replicate that strong form at Vale Park on the road sooner rather than later, starting at Gresty Road. 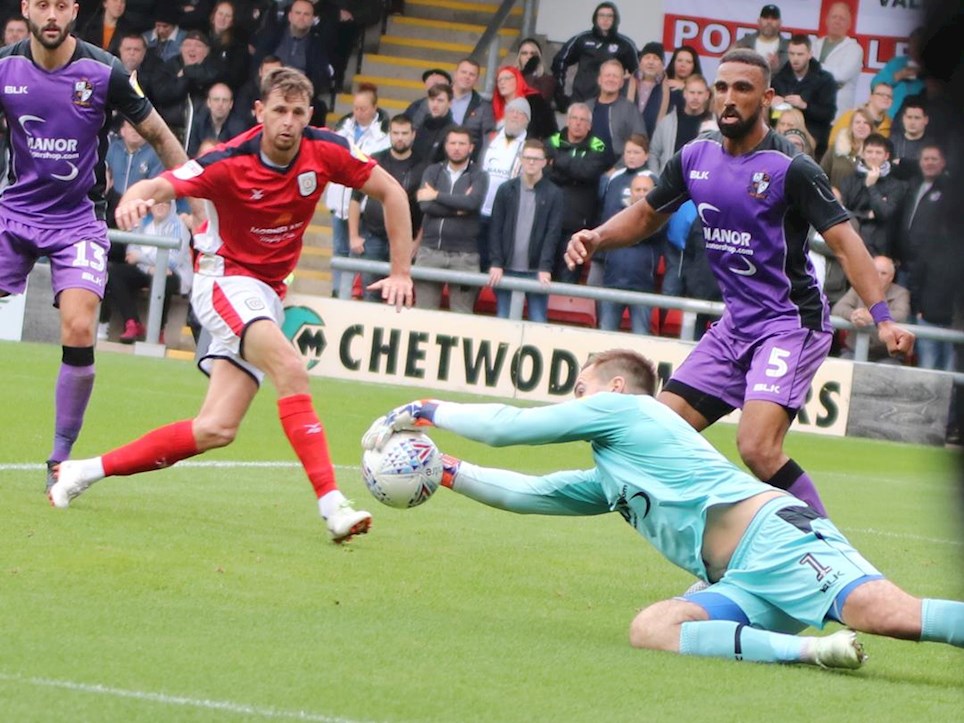 A Leon Legge header from a Luke Hannant cross decided the 79th derby between Crewe Alexandra and Port Vale this afternoon and although Crewe huffed and puffed we couldn’t find that equaliser. Legge stole in at the far post with 15 minutes left and that decided a game that had 0-0 written all over until that point.

Chris Porter had Crewe’s best chance to break the deadlock after Jordan Bowery had chased down an under hit back pass from Mitchell Clark but Legge was there in his defensive role to clear it off the line.

Crewe Alexandra boss David Artell made just the one change from the side that drew 0-0 with Cheltenham Town last weekend. The change of personnel occurred up front with Chris Porter replacing Alex Nicholls to form a new partnership with Jordan Bowery. Both Nicholls and the Staffordshire-born Shaun Miller started on a strong looking Crewe bench.

As expected, Neil Aspin named the former Crewe Alexandra striker Tom Pope in his starting line-up and the number 9 once again captained the Valiants on another return to Gresty Road.

The 79th derby encounter between the two clubs started at an electric pace and was again played in absorbing atmosphere at Gresty Road.

Crewe’s first half chance fell to Jordan Bowery in the opening five minutes but he couldn’t quite direct Ainley’s cross goalwards.

Aspin’s Port Vale side continued to work hard and press us as high up the pitch as possible. They hunted in organised packs and that made it difficult for Crewe to sometimes achieve any rhythm to their passing. It disrupted our play at times and Port Vale’s first effort on target saw midfielder Manny Oyeleke strike straight at Garratt from the edge of the box.

Vale’s early pressure also saw winger Ben Whitfield nearly catch out a slipping Nicky Hunt but Ng came across to deflect his low shot into the gloves of Garratt.

There were periods of wrestling between the two forwards and the two centre halves for both sides but the referee allowed the game to flow and there were some feisty tackles going in. It made for a good derby game.

Crewe began to grow in the contest though and Kirk had a dangerous low cross cut out by Leon Legge and captain George Ray threw himself at a James Jones corner but was put off by Pope.

Some neat play from Ainley and Corey Whelan nearly saw a pass drop invitingly to Porter but a sight touch from Mitchell Clark just took it away from a the Crewe striker. Ainley also had a low shot that was collected by the Vale keeper Scott Brown.

The game ebbed and flowed but Crewe’s had the best chance of the first half. Clark under hit a back pass that allowed Bowery to seize on the mistake. To his credit Scott Brown advanced quicker to make a block but the rebound fell to the supportive Porter. The experienced striker did everything right and side footed towards the empty but Legg was alert to the danger and had retreated to make a superb clearance from the line.

Moments later, Legg then flicked away a tempting ball Wintle to take it away from Kirk, who had raced into the Port Vale box untracked. Ainley also had a shot blocked inside the box after Porter had used his body to hold up play and lay it off for the winger.

At the other end, the lively Ricky Miller teed up To Conlon and he caught his 20 yard shot well but Garratt was well positioned to make a simple save.

The visitors’ best chance arrived in stoppage time and again it was an under hit back pass that created the opportunity. Whelan played a blind back pass and Miller had read it to race into his channel. Ray went with him and Garratt was forced into a smart save and Luke Hannatt could only side foot the rebound wide of the far post from a tight angle.

Vale started the second half on top and Crewe had an almighty let off in the opening minutes when Pope hit the crossbar from close range after Miller had forced Garratt to parry out into the six yard box.

With Vale pushing forward, an Ng handball on the edge of the box presented Miller with a chance from a direct free-kick but his tame effort hit the Alex wall.

Ainley was booked for a soft foul and he was joined in the referee’s book by Whelan after Miller had once again made a pest of himself down the touchline.

With Port Vale looking the more likely side to break the deadlock, David Artell made a double change with Shaun Miller and Kevin O’Connor replacing Ainley and Hunt.

A deep cross from Whitfield just missed the head of Pope at the far post before Shaun Miller was booked for a block.

With both sides planting crosses into each crowded penalty areas, it was centre-halves on top. The breakthrough in the 75th minute after the referee didn’t award us a free-kick for a foul on Porter but he did instantly for Vale for a similar foul.The Alex boss was incensed on the touchline.

Hannant’s first cross fom the free-kick was blocked, but in the second phase, his cross to the far post found the unmarked Legge and he headed forcefully past Garratt. It was the first time we had conceded a goal at home in the league this season.

Crewe were now desperately chasing an equaliser and we huffed and puffed but with Legge winning most things with his head the Port Vale rear guard stood firm. There was a big shout for a penalty when George Ray looked to be shoved in the back at a corner and even more so when Scott Brown took out Kirk instead of the ball. The referee awarded a corner. It certainly wasn't that!

The last real chance we conjured up to grab a point, Kirk found Miller down the wing and after he managed to get a cross over the six yard box, it hit the foot of Legge and then Brown made a smart save with his outstretched foot from his own player. Vale saw the game out to claim their first win at Gresty Road since November 2013.

Crewe Alexandra welcome local rivals Port Vale to the Alexandra Stadium for the latest edition of the A500 derby as the Alex bid to maintain their unbeaten home record in 2018/19.

The last time Crewe & the Vale met was in April this year in a 2-2 draw at the Alexandra Stadium. Charlie Kirk notched an injury time leveller, sparking wild scenes inside Gresty Road, with Manager Dave Artell ending up with the supporters in the Gresty Road End after a 50-yard sprint down the touchline!

It's sure to be a raucous atmosphere on match day & we're expecting it to be busy. Be smart & book your tickets in advance to avoid lengthy queues on the day.

Tickets in the home sections of the ground are on sale to Crewe Alex customer number holders only.