Crewe Alexandra head into the Cheshire Derby with Macclesfield still unbeaten at home, but desperate for three points after back-to-back away defeats.

The Silkmen are yet to win in League Two this season with two draws & three defeats to their name.

Crewe: Crewe have no fresh injury concerns ahead of the Cheshire match-up, with long-term absentees Harry Pickering & Paul Green on the sidelines. However, George Ray could be in line for a return after his injury lay-off.

New signing Kevin O'Connor could go straight into the side at left-back after linking up with the squad this week, or one of Nicky Hunt, Perry Ng or Eddie Nolan could continue to deputise.

Dave Artell will be glad to get his troops back on home soil after a torrid few weeks on the road. The Alex are unbeaten at Gresty Road, but shipped seven goals & lost both matches away at Colchester & Carlisle.

Macclesfield: The Silkmen are yet to win in League Two this season, drawing two & losing three.

But they have set-up a mouthwatering Carabao Cup Third Round tie at West Ham after overcoming Bradford & Walsall - both on penalty-kicks - in the first two phases.

Macc are without Ryan Lloyd & Elliot Durrell, with Ben Stephens & Michael Rose being monitored ahead of the clash. 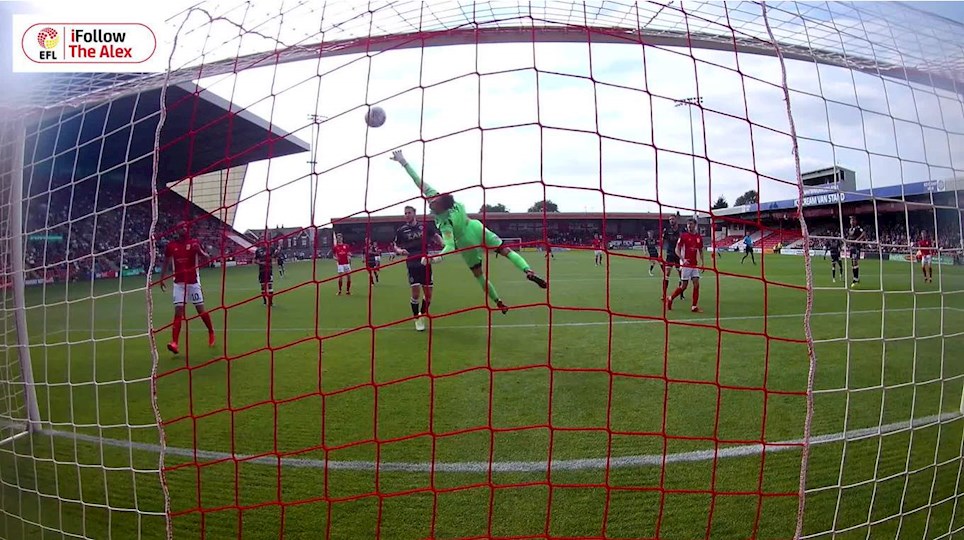 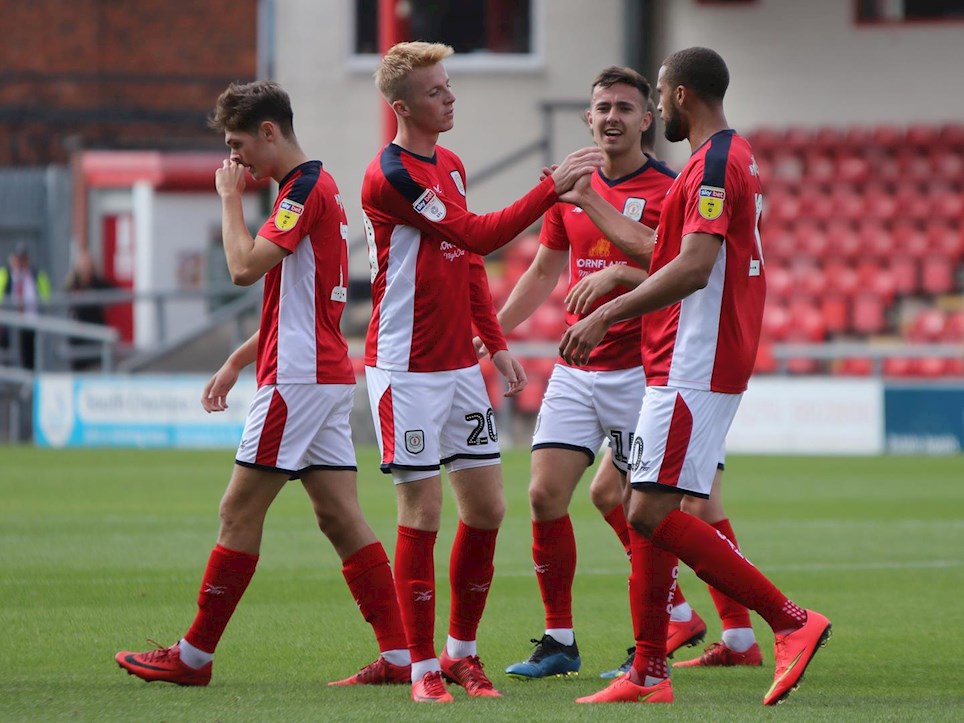 Crewe Alexandra recorded only their second ever league win over our near neighbours Macclesfield Town to move to14th position in the League Two table. First half goals from Charlie Kirk and Jordan Bowery put the Railwaymen firmly in control on derby day and Bowery added his second with a fantastic header following a swift counter-attack in the second period to seal a fairly comfortable victory.

It was no more than Crewe deserved and we have now collected a decent return of seven points from our three home matches so far this season.

Having lost his influential midfielder Paul Green to a knee injury, boss David Artell had to re-adjust his side for the visit of the Silkmen. James Jones partnered Ryan Wintle in the centre of the pitch with Callum Ainley and Charlie Kirk working the flanks.

Artell handed his new loan signing Kevin O’Connor his debut at left-back with Perry Ng switching to right-back. Fellow loanee defender Corey Whelan could not be included as he was not registered by the midday deadline yesterday.

George Ray returned from his rib injury to captain the side. Michael Raynes and Nicky Hunt dropped back to the bench.

Crewe Alexandra nearly got off to the perfect start in the opening minute of the game. Some good build up play from Ainley and Miller so nearly presented Bowery with an early opportunity but he couldn’t quite reach it as it flashed across the box.

Ainley continued to show real quality up against the Macclesfield full-back David Fitzpatrick and after he collected a wonderfully lifted cross field pass from Wintle, he smuggled in behind the napping full-back and found Bowery and his firm drive was saved by the outstretched foot of Kieran O’Hara.

Macclesfield did have a spell in possession and looked for the height of Harry Smith more often than not but Ray and Nolan stood firm in the early exchanges. From the resultant corner, Bowery couldn’t direct his header on target from a good position.

Crewe took the lead after just 17 minutes of play. Kirk found space in a pocket of space, and had the confident to head towards the Macclesfield goal. Without breaking stride he lifted his lofted shot over O’Hara for his second goal of the season. It was a wonderfully taken goal.

The only downside was the loss of Eddie Nolan through injury after he collided with the towering Smith. Hunt was soon off the bench again with the versatile Ng moving into the centre. It looks to be another injury blow for the Alex.

Macclesfield also lost their new on-loan striker Jordan Ponticelli due to injury. He had to be stretched off down the tunnel. He had to be replaced by another giant, Nathan Blissett.

Macclesfield switched their wingers around and David Whitaker and Malachi Napa was always a threat.

On the half an hour mark, Macclesfield kept possession well in-and-around the Crewe penalty area to work a shooting opportunity for Napa. He tried to disguise his curling shot and a wicked bounced forced Garratt to push it round for a corner.

Nicky Hunt produced a wonderful sliding pass to find the run of Bowery behind the Macclesfield back line and he once again forced O’Hara into a decent save.

Bowery had been a menace to the Macclesfield defence and he duly got his reward five minutes before the half time interval. Kirk was the provider, producing a teasing cross form from the left that tempted O’Hara from his line and Bowery beat him to it to direct it goalwards with a firm header. James Jones rushed in to make sure on the line but Bowery’s effort was going in.

Ng made a superb recovery tackle to deny Smith a run on our goal and new loanee O’Connor blocked a shot from Whitaker as Macclesfield tried to find a goal before the break.

O’Connor had an assured debut and produced some telling crosses and passes into winger Kirk, to weave his creativity in the final third.

A late counter attack from Crewe saw Bowery win a fantastic header up against Grimes to find Miller in space. He pushed on towards the edge of the penalty area before feeding Ainley. He tricked his way past Fitzpatrick but his powerful drive was touched into the side netting by a well-placed O’Hara. Ainley, full of confidence then tried his luck with an ambitious effort that flashed wide.

Macclesfield made a tactical change at the interval with Miles Wetch-Hayes for Callum Maycock and they went longer to Blissett and Smith. It put Crewe on the back foot for a while in the second half and Blissett forced an early save from Garratt. The former Plymouth man also met a deep cross from Fitzpatrick and Garratt had to be well placed to make the save look simple.

O’Connor was booked for taking his time at a throw-in before Crewe conjured up another great chance. Kirk found Bowery and his shot was again saved by the foot of the Macc keeper and Ainley couldn’t quite take advantage on the follow up.

O’Connor then headed a James Jones cross over the top of the crossbar.

Macclesfield Town had their half chances too though and Ray had to be at his best to block shots from Napa, who continued to try and get back the visitors back into the contest.

It was over though in the 68th minute. Ainley was left flat on the ground as we broke again and following a terrific run from James Jones, he picked out Bowery with an excellent cross and he directed header once again. It was no surprise that he was named Man-of-the-Match by the club sponsors.

Ainley made way for Raynes as Crewe went to five at the back to cope with the extra height. Soon after Nicholls replaced O’Connor, who went down with cramp. Nicholls operated from the right hand side with Hunt on the left.

Macclesfield kept going and Fitzpatrick fired over the top of the crossbar.

Bowery couldn’t quite take a Wintle pass into his path as he hunted down a hat-trick and Kirk fired over the bar as Crewe went in search of a fourth goal.

Crewe were comfortable in the end and will be delighted to have also kept a clean-sheet.

Crewe Alexandra welcome Cheshire neighbours Macclesfield Town to the Alexandra Stadium as the Alex bid to maintain their unbeaten home record in 2018/19.

Crewe Alex supporters are also hoping to boost the atmosphere for the game as well by holding a 'Flag Day' at the Alexandra Stadium. Click here for more info.