Crewe Alex are looking to continue the fine home form against Bury this weekend, having conceded just one goal at Gresty Road this season.

The Alex have won three, drawn one & lost one of the five home games in League Two this season, scoring ten goals in the process.

Former Alex striker Ryan Lowe is now Manager of Bury & he brings his side to Gresty Road looking to seal all three points having only left the Alex as a player in January 2017.

Crewe: Harry Pickering is in contention to start his first game since August after returning from injury as a substitute in the defeat to Lincoln last weekend.

Eddie Nolan is still a few weeks away, but the majority of the squad is fit & in consideration for selection to take on the Shakers.

Bury: Ryan Lowe played under Artell for Crewe during the first month of his reign, before re-joining Bury in January 2017.

The former Alex striker has taken on Chris Dagnall who enjoyed this last two seasons at Crewe, as well as former favourite Byron Moore & Nicky Maynard, who spent the summer training at Reaseheath.

Eoghan O'Connell (hamstring) will be monitored ahead of the game having missed the last two, with Callum McFadzean likely to continue in defence.

Dagnall, Maynard & Moore are all likely to start.

Live Video/Audio: The match IS available on iFollow for live streaming in the UK. Click here to purchase a £10 match pass. 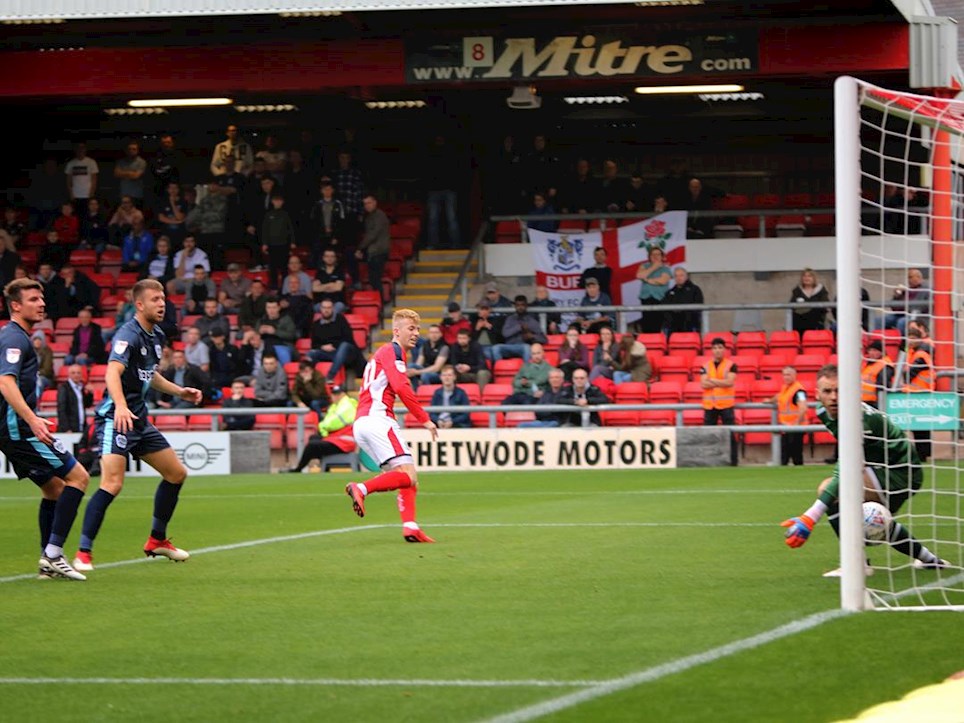 Crewe grind out a great point against Bury with Garratt and Ray heroics keeping the Shakers out.

Crewe Alexandra protected their home record with a 1-1 draw against Bury but we had to work extremely hard for it as the Shakers upped their game in the second half. Crewe had goalkeeper Ben Garratt and captain George Ray to thank for some excellent saves, blocks and headers to prevent them scoring a winner.

Garratt made three outstanding saves, one with his face and Ray was deservedly our man of the match as we stuck in there to earn a good point on the balance of play.

Crewe took the lead in the 38th minute after some great work by Jordan Bowery and a deep cross by Nicky Hunt was tucked home by Charlie Kirk at the far post.

It was no great surprise that it was a former striker, Nicky Maynard popping up with the equaliser. The goal poacher was in the right place at the right time to tap home a close range finish. To his credit, the striker didn’t celebrate his equaliser.

Crewe stood up to some growing pressure as Bury went for the jugular and Garratt saved brilliantly to deny substitute Dom Telford and Maynard.

With Corey Whelan away on International duty with the Republic of Ireland Under-21s, David Artell recalled Nicky Hunt to the starting line-up. The experienced Hunt filled the void at right-back. There was also a change at left-back with Harry Pickering coming in for Kevin O’Connor, who dropped to the substitutes’ bench.

Pickering returned from his hamstring tear last weekend at Lincoln City, when replacing James Jones as a second half substitute. It was Pickering’s first start since sustaining the injury away at Colchester United in late August.

Bury boss Ryan Lowe named our former players Nicky Maynard and Chris Dagnall in his starting line-up. Byron Moore was not deemed fit enough to travel to Gresty Road after suffering with a gluteus muscle problem.

The game kicked off in dry but rather windy conditions and Crewe Alexandra conjured up the first chance of the game. George Ray should have been celebrating his 25th birthday with a goal when finding some space at a Harry Pickering corner but he failed to hit the target and test Joe Murphy in the opening five minutes.

Callum Ainley was bright early on and a tremendous through all just ran through to Murphy as Jordan Bowery chased it down.

Nicky Maynard’s first real involvement for the Shakers saw him waltzed into the Crewe penalty area but Hunt did well to intercept the ball as he threatened to find a yard and curl a shot towards the far corner.

The game ebbed and flowed but genuine chances were limited. Ainley found some space after a slip in the Bury backline and instantly got a shot off. He shot too close to Murphy though and he was able to gather at the second attempt.

George Ray was excellent and he blocked a half chance from Dagnall before a through ball ran away from the former striker and Garratt read it well to race from his line and collect.

Kirk and Ainley combined on the left hand side and after Ainley produced a tidy turn he flashed a powerful shot wide from 22 yards out. It was a good effort from the Crewe youngster.

Bury began to really control the possession though and Mayor was always a concern when he picked the ball up and liked to dribble towards our box. After more good build up play, Dagnall dragged one wide and perhaps should have applied a tough at the far post after a really dangerous cross came over the Crewe six yard box. Nicky Adams shot wide of the mark after coming off the touchline.

The hard working Bowery and then Ray did well to block another half chance from Dagnall before Crewe broke the deadline on 38 minutes. It was a really well worked team goal.

Bowery showed tremendous pace and determined to chase down his own deft touch and get ahead of Adam Thompson. It was great work and he laid it off to the supportive Hunt. The recalled right back sent over a teasing ball to the far post and there was Kirk in enough space to side foot a volley superbly past Murphy. It was a quality finish for his fourth goal of the season.

Bury continued to enjoy the majority of the ball though and they went in search of an equaliser in the final minutes of the first half. Our defending became a bit rocky and we conceded too may needless free-kicks. Jay O’Shea had the best opening from the edge of the box but his shot was blocked. Crewe had been excellent at doing that all half.

The second half started with the visitors upping their performance. They increased the intensity and after Pickering had denied Maynard with a timely tackle before the former Crewe man was in the right place to tap home an equaliser. Nicky Adams’ forceful run down the Crewe right saw him pick out the vastly experienced forward and he couldn’t miss. To his credit, he didn’t over celebrate with his new team.

Bury continued to press and Ben Garratt did fantastically well to deny Chris Stoke and then a collection of players managed to block Adam Thompson’s follow up as he tried to force it over the line.

Dagnall made way for Telford for Bury before Porter made way for Miller. Telford was soon presented with a great chance when he was slipped in behind the Alex defence but Garratt rushed out superbly to save his lifted shot with his face. It was a superb save.

Crewe were playing on the counter attack more so than the first half and our best chance fell to Kirk but he lifted his shot over the bar from a decent position. Jones was booked for pulling back Mayor.

Bury looked the more likely side to score again and Maynard and then Telford threw themselves at another low cross. Any sort of touch would have made it 2-1.

Crewe were defending their box well though with Ray seemingly in the right place at the right time and Bowery tracked back to win his fair shares of headers.

Garratt had to perform heroics again to deny Maynard. The Crewe goalkeeper did well to readjust and get a big hand on his shot, as he was heading in the wrong direction. The Alex goalkeeper also did well to push out a header by Thompson.

Another tempting cross from Stokes only needed a touch from Telford and Crewe were holding on. Another of Bury’s changes, Callum Styles, who had replaced Neil Danns, whistled one wide of the target and Crewe had to defend a late free-kick deep into four minutes of stoppage time. Ray was there again to head clear.

Crewe Alexandra are set to welcome back several former players for todays match-up with Bury FC at Gresty Road.

The Shakers Manager, Ryan Lowe, in fact left Crewe as recently as January 2017 to re-join Bury as a player before evetually being handed the Manager's job.