On that occassion, the Alex won 2-1 thanks to a double from a young Ryan Colclough & Rovers were evetually relegated from League One at the end of that season.

Since returning to the EFL this season after being relegated out of the league in 2015, Tranmere have been going great guns & currently sit inside the play-off places.

In contrast, Crewe have had a bumpy start to the campaign & currently occupy 18th spot in the league.

The form tables would point to an away win for Rovers, but Crewe always seem to do what isn't expected of them so it really is anyones game!

Crewe: The Alex have no fresh injury concerns ahead of the contest despite Eddie Nolan & Jordan Bowery seeming to end Tuesday night's game with a limp. Both are fine & in contention.

The Alex are looking for victory for the first time since defeating Grimsby 2-0 in late October & are looking to arrest a run of four straight defeats in all competitions.

David Artell remains in confident mood ahead of the contest, insisting his troops are not far away from putting a really positive string of results together.

Tranmere: Cole Stockton is back in training following a lay off through injury. Liam Ridehalgh is also back within the first team set up, featuring in the Cheshire Senior Cup on Wednesday night.

Rovers look to main man James Norwood to provide the threat - the striker has netted 13 goals in his 17 games this season. 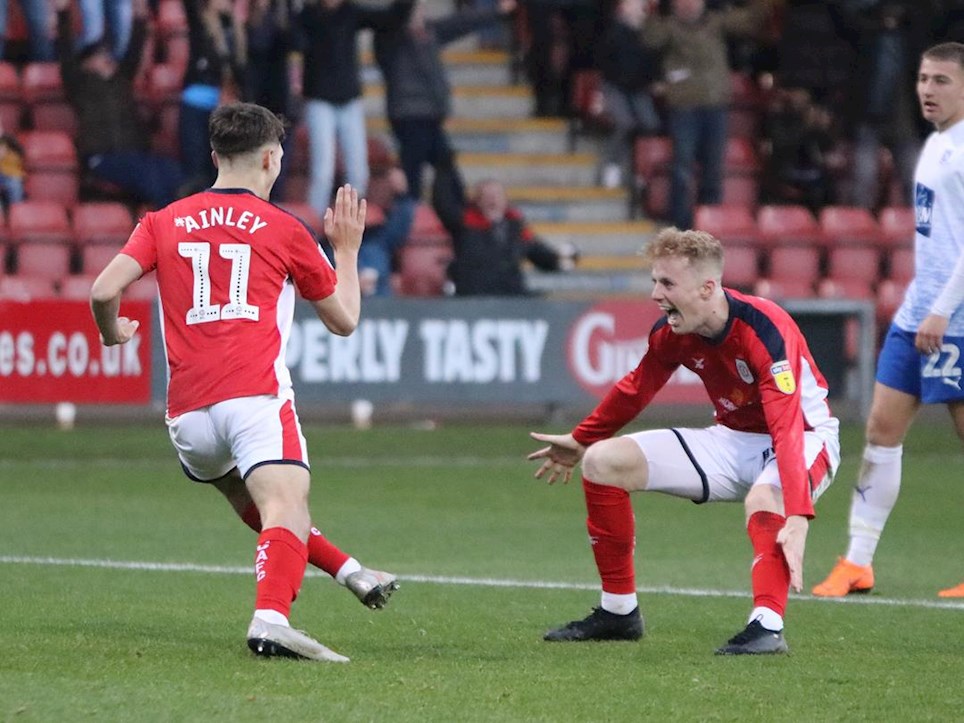 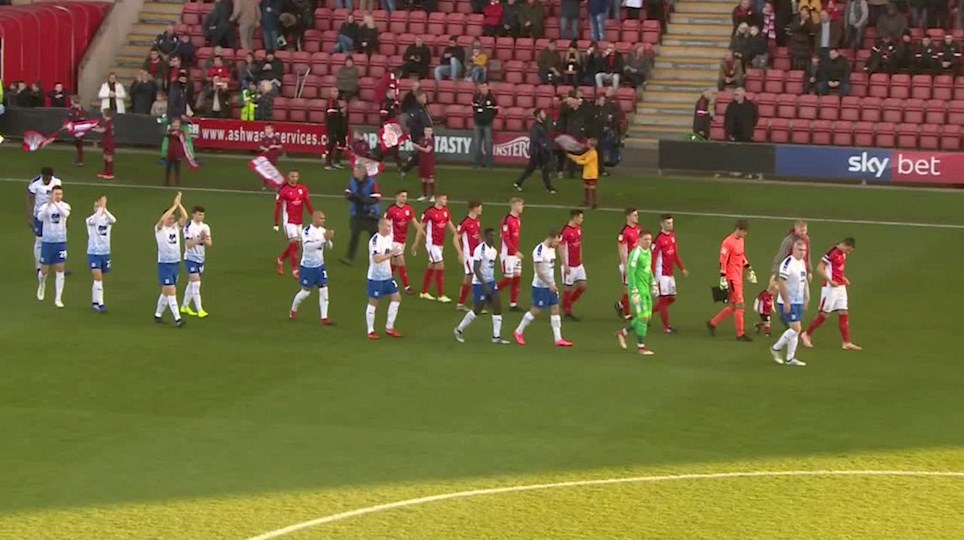 Two superbly taken goals from Callum Ainley and another from Charlie Kirk sealed a fantastic three points for Crewe against Tranmere Rovers this afternoon. In what turned out to a real thriller at Gresty Road, James Norwood and Paul Mullin scored for the visitors, but Crewe deservedly held on to end a run of four successive defeats in all competitions. In truth, 3-2 flattered Tranmere.

Crewe Alexandra boss, David Artell, was forced into a change after his captain, George Ray, was deemed not fit quite enough to face Tranmere this afternoon. Artell didn’t take any risks with his captain after he  complained of pain in his ribs. That meant a readjustment again for Perry Ng, who moved back to the centre of defence to partner Eddie Nolan.  Perry Ng captained the side in Ray’s absence.

The other change was at left-back with Harry Pickering moving back into the back four after he operated in midfield on Tuesday evening against Shrewsbury Town. Midfielder Ryan Wintle returned to the starting line-up after being left out of the club’s last two matches.

In the early exchanges both sides were adjusting to the formations and patterns of play and genuine chances were limited inside the opening 10 minutes. It was a fairly open affair though and from a corner, Eddie Nolan just couldn’t divert his effort on target.

At the other end, Ryan Wintle was on hand to make a superb clearance off our line as Jonny Smith looked to be coming in at the far post. The Alex midfielder saved a certain goal.

Crewe’s first chance of the afternoon saw Ainely spin sharply and draw a save from Scott Davies, who had to get down to push his low effort round the post.

The Railwaymen looked the more likely side to score and so it proved after 20 minutes. Some really patient play for the Alex saw the ball switched sides and allow Ng the space and time to pick a pass into Ainley. He had occupied a fantastic little pocket of space, stretched to get hold of it, turned McNulty and his shot from 25 yards took a sligh deflection off of the Tranmere defender, Monthe, to wrong foot Davies. It was his first goal of the season.

The opening goal only boosted Crewe’s confidence, so much so that Perry Ng tried his luck with a really ambitious effort from over 30 yards. He struck it perfectly and Davies was worried as it headed towards his top corner and the ball seemed to squirm out of his grasp. He would have been mightily relived to see it drop behind for a corner.

Crewe were on top in terms of possession, but Tranmere had busy players up front with Smith and Connor Jennings. Garratt had to dive on a low cross from young Smith and Jake Caprice’s deep cross was too long for Norwood.

The Crewe goalkeeper's frist real save saw his push away a low drive from Ollie Banks.

More good play from the influential Kirk, saw him find the run of Wintle but McNulty did well to cut out his low cross towards Bowery.

On 37 minutes, Crewe made a mistake to give Norwood his first sight at our goal and he took full advantage. Ng’s played a loose pass as he entered midfield and the ball was quickly transferred from Luke McCullough to Norwood. He had space to run at the Crewe defence and his low drive took a slight deflection to beat Garatt for the equaliser. It was his 14th goal of the campaign. From a Crewe point of view it was gifted wrapped ahead of Christmas.

The goal did spur Tranmere into more life but Miller shot on target for Crewe before Norwood was presented with a late chance to make it 2-1 before the half time interval but he poked his shot inches wide of Garratt’s far post.

Another good passing move from Crewe saw Kirk and Jones combine and Jones’s forward pass was just ahead of Miller as he entered the Tranmere box. There were certainly openings there for the Alex after a positive first half showing.

A confident Ainely then made it a dream start to the second half, reinstating our lead on 51 minutes after Bowery was allowed to forcefully carry the ball forward and find Kirk. A swift one-two between the pair allowed Bowery to pass into Ainley and  The  target man did well to hold play up and find Ainley and his drive missed Bakayogo and wrong footed Davies for his second goal of the afternoon. Crewe were back in control.

Minutes later, another patient build up saw Miller find Ainley out wide and his wicked cross only ust missed the onrushing Bowery and behind him, Wintle.

Tranmere tried to hit back early on but Eddie Nolan did well to block an effort from Harvey Gilmour. Gilmour soon made way for Cole for the visitors.

Ainley then turned provider in creating a third goal for his friend, Charlie Kirk. It was another fantastically crafted goal. Ainley received a pass from Jones, before turning past Bakayogo and his deep cross was finished calmly at the far post but the unmarked Kirk. It was another fine finish from Kirk as he side footed home to mark his fifth goal of the season. Crewe had deservedly got a two goal cushion. It was well deserved.

Micky Mellon made another change with Mullin replacing Smith and that gave Tranmere more thrust up front. Pickering did well to deny Mullin a free header at our goal and McCullough headed just wide of the mark.

Crewe were standing firm and Norwood had a low shot deflected over before his  header hit the foot of the post.  From the second phase,  a superb cross from Ollie Banks saw Mullin produc a great touch inside a crowded area to make 3-2. There were just six minutes on the clock.

Crewe replaced Miller with Porter and almost immediately, McNulty denied Porter a clear run at goal from a Pickering free-kick. Porter used all his experience to give the ball inthe corner and he won a late header out of our box.

Tranmere Rovers piled some pressure on in the closing stages  and their frustration got the better of them at times with a few yellow cards being flashed, one when Charlie Kirk was bumped over. It caused a bit of melee but Crewe were keeping their discpline.

Tranmere’s only chance in the closing stages saw a corner drop to Bakayogo but he couldn’t control his long distance shot and it cleared Garratt’s crossbar.

David Artell's side are looking to arrest a run of four straight defeats, of which two came in the league. Prior to that, the Alex went four league games unbeaten & the manager is determined to start another positive run against Rovers.

*Please Note. Tranmere Rovers have SOLD OUT of the away section of the ground. There are no more tickets availabe for Tranmere supporters*

Crewe Alexandra supporters must have an exisiting customer number (created previously) in order to purchase tickets.