Crewe Alexandra head into the FA Cup First Round meeting with Carlisle United looking to progress to the next stage for the second year running.

The Alex produced a shock 2-1 victory over high-flying League One side Rotherham United last season before losing a replay to Blackburn Rovers in round two.

Boss Dave Artell is targeting an extended cup run this year, but know it won't be easy against fellow League Two side the Cumbrians who have won the last three meetings between the sides in all competitions - without the Alex scoring a goal.

Crewe: James Jones is rated 50/50 ahead of the meeting with the Cumbrians. All other first team players, Paul Green aside, are available for the cup tie.

Corey Whelan & Kevin O'Connor are both eligible to play having been given permission by Liverpool & Preston North End respecitvely.

Crewe are looking to bounce back after back-to-back defeats without scoring, but Manager Dave Artell says the team are fired up ahead of the FA Cup tie.

Carlisle: The Cumbrians won against Newport on Saturday, but that was actually their first win in six games - having lost four during that run.

Loan striker Ashley Nadeson is ineligible to play having not gained permission from his parent club.

Hallam Hope has been out injured, but he's expected to be fit to return for the FA Cup tie.

Jason Kennedy, Kelvin Etuhu & Tom Parkes continue to be absent - whilst goalkeeper is also still missing after being injured alongside Alex man Paul Green in a 50/50 challenge in the match at Brunton Park in August.

The match IS NOT available on iFollow for live streaming overseas. 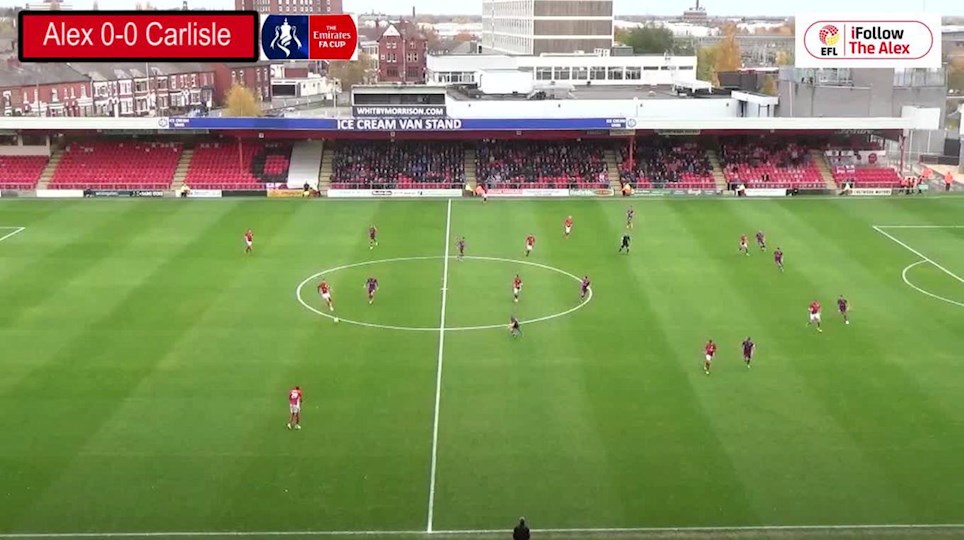 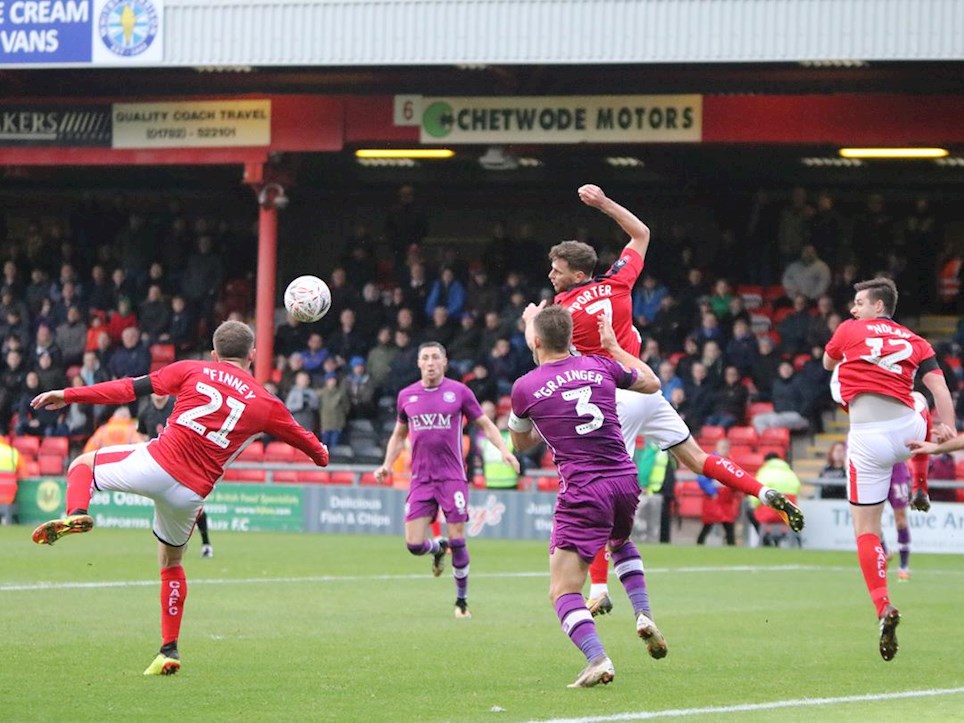 Crewe out of the FA Cup after harsh last minute winner by Jamie Devitt after he blocks a clearance from Garratt.

Crewe Alexandra exited the FA Cup in the most harshest of fashion after a clearance from Ben Garrett hit Jamie Devitt and rolled over the line in the dying minutes.

It was so harsh on Garratt, who had heroically saved a Danny Grainger penalty in the first half and his team-mates, who didn’t deserve to lose the tie over 90 minutes.

It was such an unfortunate way to go out of the competition because it looked like having 0-0 written all over it, really after Garratt’s penalty save, but Devitt didn’t give up on a back pass from Kevin O’Connor and placed Garratt under pressure with the ball at his feet. It paid off and the Alex couldn't believe the manner of the winner on the day.

For the visit of the Cumbrians, David Artell made five changes to the side that lost 2-0 at Northampton Town last weekend.

Coming into the side were Nicky Hunt and Kevin O’Connor at full-back. Eddie Nolan returned to the starting line-up after his second half return at the Sixfields Stadium.

The other changes occurred upfront with Alex Nicholls and Chris Porter forming a new partnership for the first time this season.

Before the game kicked off, there was an emotional period of reflection for all those who have lost their lives in conflict and to commemorate the 100th anniversary following the end of the First World War in 1918.

Carlisle United conjured up a couple of half chances in the opening minutes with Jamie Devitt going closest with a decent effort that had Ben Garratt adjusting to make sure it drifted wide.

Porter stole in behind by screwed his shot wide of the target and he was close to reaching a tempting low cross from left-back Kevin O’Connor.

Devitt, was a threat when he found pockets of space and he went close again with a dipping half volley as the contest continued to be a fairly even affair.

Pickering and Ng looked for the runs in behind of Nicholls but Carlisle were arguably getting more shots off.

Garratt was called into action to push a shot from Regan Slater behind for a corner and Anthony Gerrard headed the resultant corner over the top of the crossbar.

The big talking point of the first half came in the 24th minute after Hallam Hope was played in behind and as Richie Bennett managed to poke it behind, the referee awarded a soft penalty. It was difficult to see what it was given for and the Crewe players were right to contest it. It was a strange and perhaps justice was rightly served when Garratt dived to his right to make a fantastic save from Danny Grainger.

Crewe got themselves going again and a deep cross from Kirk found Finney at the far post but his well executed volley was blocked and spun out for corner. It was a touch unlucky.

The game was littered with stoppages for free-kick and it didn’t help the flow. Ray was well placed to touch a cross from Hope behind for a corner and Ng made a sturdy block on a shot from Gillesphey.

The Alex’s best chance of the half, saw Kirk drop into space in the centre of midfield and play a defensive splitting pass into Nicholls. His first touch took him a little wide and he couldn’t shoot across goal and really test Adam Collin for the first time.

There was still time for Hunt to offer a good overlap and his lifted cross was just too high for the hovering Porter at the far post.

Kirk became more influential in the second half and an early run and shot brought a good save from Collin.

David Artell made an early double substitution with Bowery and Ainley introduced for Porter and Finney. Ainley was soon involved and he and Kirk began to combine really well together.

Hope drew another top class save from the Crewe number one after he had been found in the centre of the goal. It was another good stop from Garratt. Hunt was booked for a foul on Hope close to the byline.

The Crewe goalkeeper then pushed an effort from Grainger away before the Alex began to get on top.

In search of a winner, Miller came on for Nicholls and he headed a Hunt cross over before a clever pull back from Hunt nearly found Kirk.

At the other end, Bennett curled a shot into the gloves of Garratt and the Railwaymen continued to press forward looking to avoid a replay.

It looked as though it was heading towards a replay at Brunton Park before the late drama. Devitt chased down a back pass from O’Connor and Garratt’s kicked clearance hit the body of the Carlisle midfielder and trickled over the line! It was heartbreaking and there was not enough time for a response.

Frustrating doesn't come into it.

Crewe Alexandra take on fellow League Two outfit Carlisle United in the First Round of the 2018/19 Emirates FA Cup at Gresty Road.

The match takes place on Saturday 10 November with a 3pm kick-off.

Season Ticket holders are able to claim their regular seat for this fixture. Holders should login online at https://www.eticketing.co.uk/crewealex/ & can activate the purchase of the seat.

*Season Tickets holders SHOULD NOT create a new online account. Simply log-in or activate your using your current customer number & your ST seat will automatically be reserved for you to purchase* - This also applies for Tuesday's Shrewsbury Cheackatrade match.

*Must hold a valid Crewe Alexandra student membership - click here for info on how to become a member.