Crewe usually find Crawley a happy hunting ground - winning three of the last four and losing just one from the six played between the sides at the Checkatrade Stadium.

Crewe: George Ray is rated as 50/50 for the match after missing the Tranmere win with a rib problem. Paul Green continues his rehabilitation but remains unavailable.

All remaining players are expected to be fit & in contention for a spot in the squad.

The Alex could move into the top half of League Two with a victory if other results also go in their favour.

Crawley: The Red Devils will be without top scorer Ollie Palmer through suspernsion after he picked up his fifth booking of the season in the 1-0 loss at Grimsby last weekend.

The giant striker has netted 11 goals in 21 appearances this season, including two in the FA Cup in midweek.

Town have lost their last three League Two games in a row & conceded ten goals in the process - their last win coming in mid-October against Newport County. 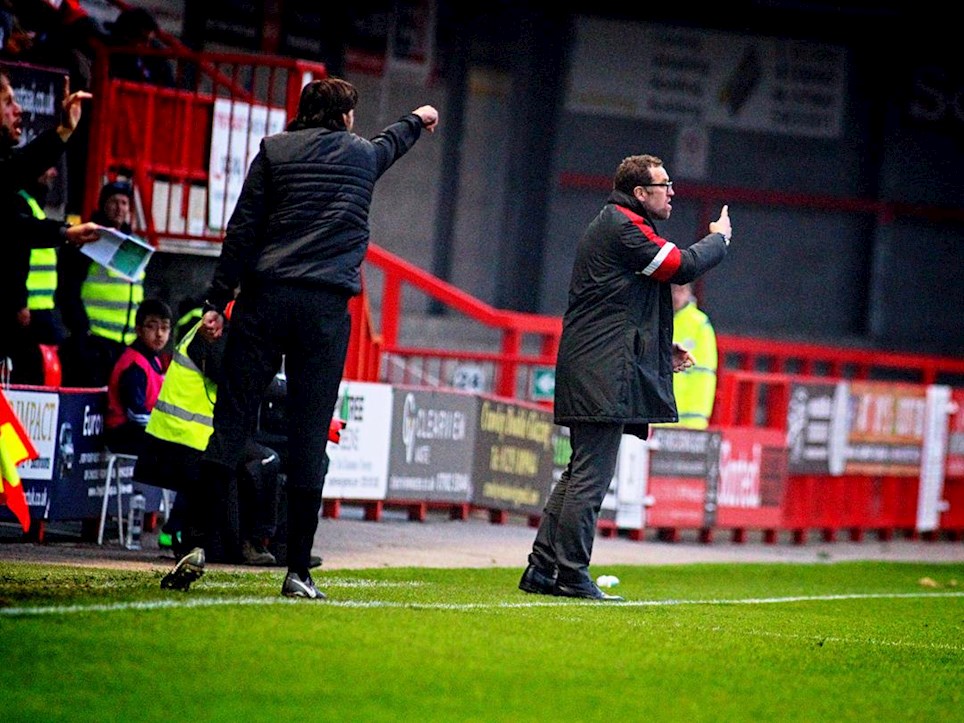 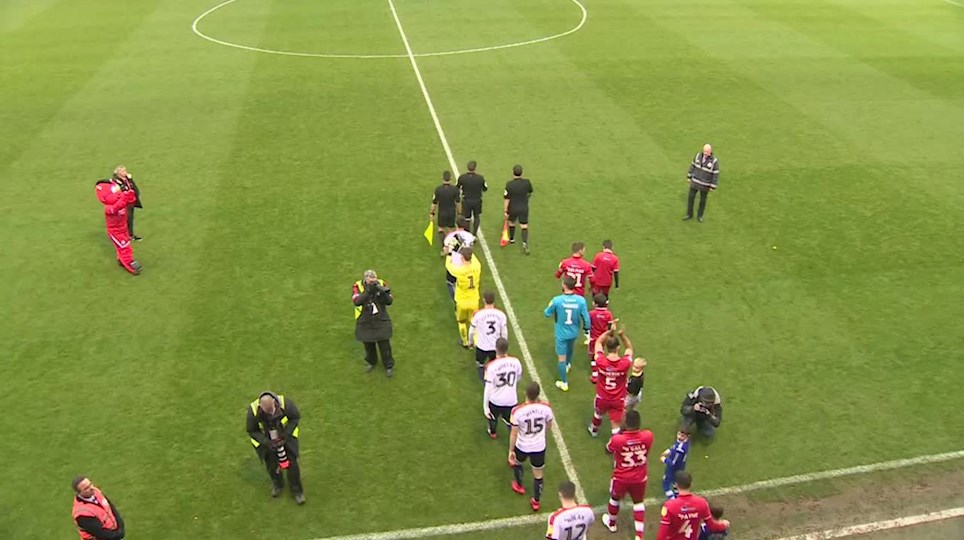 Crewe left to reflect on a host of missed chances in the first half, as game and points slip away at Crawley.

An inspired performance from the Crawley Town goalkeeper, Glenn Morris, kept Crewe Alexandra at bay this afternoon and provide his side with the platform to go on and remarkably win 3-0.

Crawley deserve credit for hanging in on there as Crewe conjured up chance after chance after chance, but Crewe only have themselves to blame for not picking up our second away win of the season. It was a strange game but Crewe really have to start taking our chances, especially on the road.

Again we were left to rue a large number of chances with Morris saving really well to deny Charlie Kirk twice, Ryan Wintle and James Jones in what was a really dominant display from the Alex in the first half.

We somehow went in at the interval 1-0 behind after a rare mistake from Eddie Nolan allowed Dominic Poleon to take advantage of his poor back header and draw a foul from Ben Garratt. Josh Payne slotted home the penalty.

Crewe continued to press and press looking for an equaliser but it never came and lo and behold, Crawley’s towering defender Joe McNerney heads home a 80th minute corner to seal all three points for the home side. It was one of those days for Crewe but we really should have taken some of our glorious chances to make this a totally different game.

Daniele Bulman slid in at the far post to make it 3-0 in injury time to literally rub salt in our wounds.

Crewe Alexandra boss David Artell resisted the temptation to change the side that so impressively defeated Tranmere Rovers last weekend. Artell had the chance to name the same 18-man squad that saw Crewe beat Rovers 3-2 at Gresty Road.

Club captain George Ray was not deemed fit enough to fit to travel, but has an outside chance of being involved against Cambridge United on Tuesday night. Perry Ng once again deputised as captain.

With Crawley’s leading marksman, Ollie Palmer, suspended after collating five yellow cards, the former Leeds United striker Dominic Poleon was handed his chance up front. Crawley boss Gabriele Cioffi made five changes to the side that took Southend United to extra-time in the FA Cup during the week.

Following a very early free-kick, Callum Ainley played a neat interchange of passing with Ryan Wintle to create a bit of space in the Crawley box but his deep cross was just over-hit as he aimed for the head of Bowery.

A bright start from the Railwaymen then saw Perry Ng hit a wonderful 40-yard ball out to Miller and after he had cleverly dummied his way into a shooting position his firm drive had to be pushed behind by Glenn Morris for a Crewe corner.

Crewe continued to threaten in attack and were getting immense joy with wide man Ainley and Kirk encouraged to run at the Crawley full-backs.

Cioffi’s side showed flashes of their neat passing as well but they were struggling to really get in behind the Crewe back line. It was all in front of us and we were comfortable.

Therefore, it was somewhat against the run of play that Crawley were awarded a penalty in the 13th minute after Poleon took full advantage of a rare mistake from Eddie Nolan. His backward header did not have enough on it and as Garratt raced off his line to try and collect it, the Crawley forward nipped it round him and took the contact. Referee Lee Collins pointed to the spot and Josh Payne made no mistake with his penalty, sending Ben Garratt the wrong way.

Crewe tried to respond and more good approach play from Jones and Wintle saw Jones release Kirk down the left hand and the in-form winger tried his luck with a superb effort from 20 yards that Morris had to tip over his crossbar.

Then from a Jones free-kick, whipped in to the far post, Wintle must have thought he has scored when he reached it with his outstretched boot but Morris was there again to keep it out.

Somehow Crewe remained behind after looking the more likely side to score. A well worked short corner; saw Ainley find his skipper, Ng, and he instantly rolled it over to Kirk and his controlled low shot was inches past the far post. Kirk was unlucky with his effort as he had searched for Morris’ left hand corner. It really did look only a matter of time with the Alex on top.

Just after the half an hour mark, Crewe should have been level. Ainley, who was having an absolute field day showed another deft touch to find Bowery and his forceful run and awareness, saw him split the Crawley defence in half to find Kirk all alone in front of goal.

Morris reacted again to shorten the angle but Kirk, especially in the goalscoring form he has been, should have scored. He shot at the Crawley goalkeeper and our best chance to score was lost.

The excellent Morris was keeping Crawley Town in front and the veteran stopper produced another smart save to deny Jones after Ng and Ainley had combined to slip the midfielder in on goal.

Crewe were completely dominating with the Crawley players virtually camped in their own half to keep us at bay.

They couldn’t live with Ainley regardless of how many players they had in retreat and after he slipped in Miller in behind, his shot over his shoulder was a good effort in difficult circumstances.

Moments later, Bowery burst down the right hand side and past Joe McNerney to provide an accurate cross over to Kirk but he lashed at it his effort to send it sailing over the bar. It was yet another really good chance for the Railwaymen to deservedly level things up at the very least before the half-time interval.

How Crewe hadn’t scored in the first half was a mystery, but you always have to give enormous credit to Glenn Morris who made some outstanding saves. The three points would have been sown up inside the first 45 minutes but for Morris.

Luke Gambin had an early sight of the Crewe goal in the opening seconds of the second half but he couldn’t get his shot from 25 yards on target to test Garratt.

Ainley carried on where he left off and his first effort whistled just over the Crawley crossbar after he had once again wriggled free of his marker.

More good work from Ainley saw his low cross hit Jones and then rebound back into the grateful glove of Morris. He was even getting lady luck on his side, as Crewe went in search of that goal that would flip this game back into our favour.

From yet another short corner, Whelan had a half chance to get a shot off and a wicked cross from Ainley only needed a touch as it whistled right across the six yard box. Wintle then flicked a Kirk cross behind.

Crawley were not offering too much of a threat at the other end of the pitch.

A long searching pass from Kirk nearly dropped perfectly for Miller but Morris had judged it to run from his box and avert the ensuing danger. Bowery had a shot blocked on the turn after great work from Ng and Whelan down the right hand side.

With the Alex on top but still trailing, George made way for Reece-Grego-Cox for the home side.

Crawley were sitting deep but on the rare occasion they did venture forward, Gambin forced Garratt into a decent save and Crewe dealt with the resulting corner.

With just under 15 minutes remaining, David Artell made a double change with Ainley and Bowery making way for Nicholls and Porter.

With just 10 minutes remaining, Crawley scored from a set-piece corner to make it 2-0 and end our hopes of a comeback. It was far too straight forward with the Crawley centre-half, Joe McNerney climbing highest to head firmly past a helpless Garratt. Needless to say, Crewe were left to rue an incredible number of chances.

In the dying minutes, Nicholls was strangely booked for diving when he had been tripped on the edge of the box and Finney replaced Kirk but that chance to make it a grandstand finish never came. Those chances had come and gone in their spades well before that.

There was still time for the Red Devils to grab a third when Bulman slid in at the far post to make it 3-0 in injury time. It was never a 3-0 game but Crewe only had themselves to blame.

Match tickets are on sale from Crewe Alex until 3pm on Friday 23 November. Subject to availability.

Official coach travel is also available to purchase online (£21/£22) - departing from the Alexandra Stadium at 08:00am.

Tickets will be on sale until 3:00pm on Friday 23 November, subject to availability.

Official coaches depart from Gresty Road at 08:00am and are priced at:

Travelling to the match?

Check out the comprehensive ground guide at AwayGames.co.uk (click here)