Crewe Alexandra head to the seaside to face Grimsby Town on the final day of the Sky Bet League Two season.

Neither team have anything to play for in terms of promotion or relegation, but Crewe are desperate to secure all three points to cement a top half finish & break a Club record spanning 25-years by winning five games on the bounce.

In contrast, the Mariner's form has plummeted in recent months, winning only one of their previous 12 games - a 1-0 victory over Carlisle on Easter Monday.

Crewe won the reverse fixture 2-0 at Gresty Road in October, but Grimsby did come out victorious in the meeting at Blundell Park last season thanks to a solitary Mitch Rose header.

Though there may not be much to play for on the final day, Crewe fans will look to enjoy their day out with some famous Grimsby fish & chips & hopefully three points to bring back to South Cheshire.

Crewe: The Alex have Harry Pickering back from injury & in contention for the final day trip to Grimsby. Only Dave Richards is thought to be missing from the squad as he continues his recovery from a shoulder injury.

Dave Artell must decide whether to stick with a similar side to that which has won four games on the bounce, or whether to give game-time to some of his other players on the final day.

Grimsby: Mariners boss Michael Jolley has said he will give some game time to some of his younger fringe players when Crewe come to town on the final day.

Ahkeem Rose, Ludvig Ohman & Jordan Cook are out injured & Harry Caldwell is doubtful. Former Crewe defender Harry Davis is set to face the Alex for the first time since leaving.

The Mariners are on a run of one win in twelve games to end the Sky Bet League Two season. 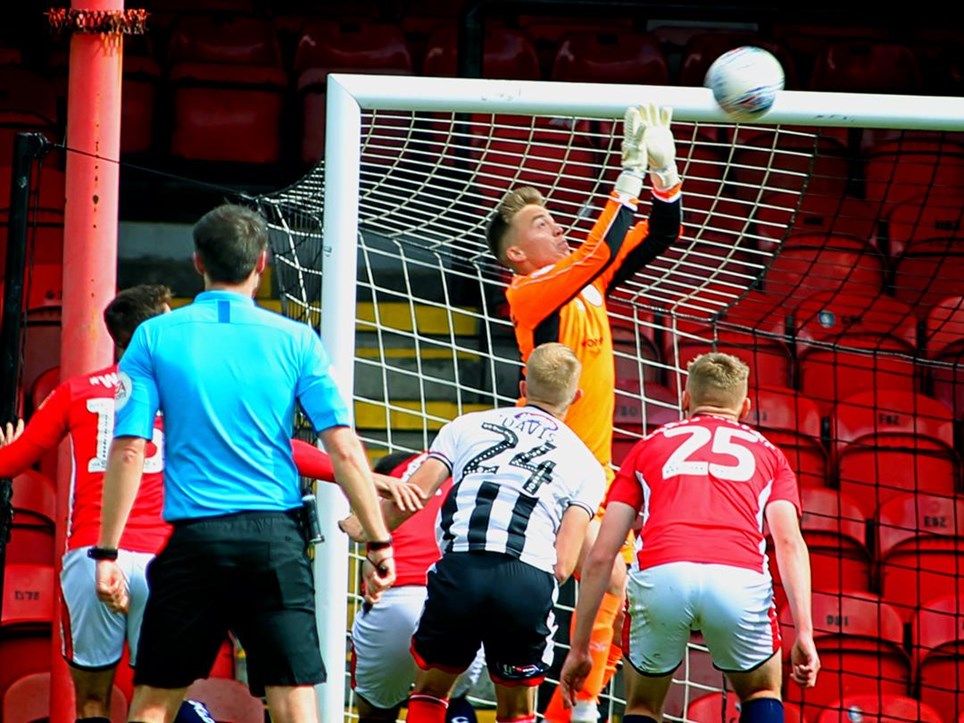 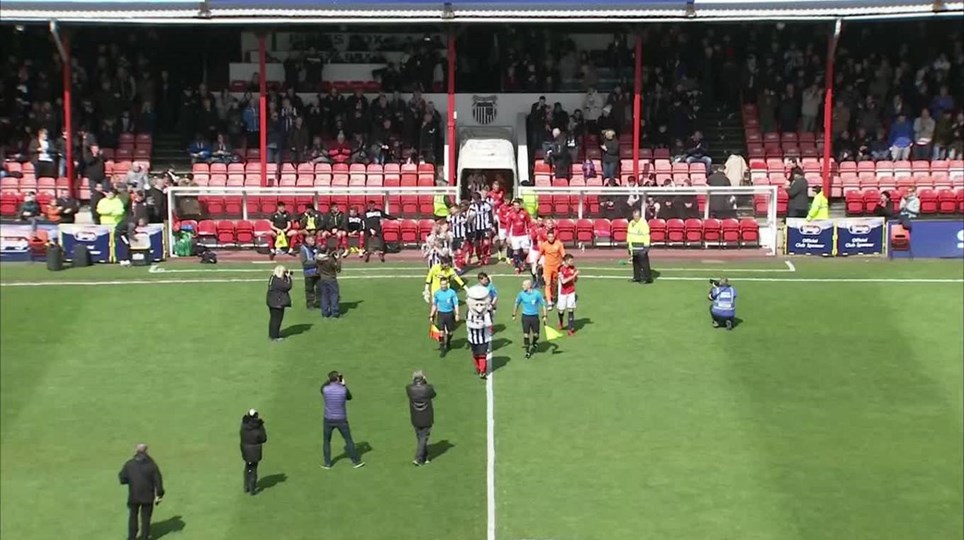 Two first half goals sink Crewe on the final day of the season.

Crewe Alexandra’s season ended in disappointment at Blundell Park with Michael Jolley’s side running out 2-0 winners.

The former Crewe captain Harry Davis took advantage of a fumble from goalkeeper Will Jaaskelainen at a corner to give the Mariners the lead and then a cross-come-shot from Joe Grayson eluded everyone to find the bottom corner to give the home side a 2-0 half-time lead.

Crewe were against the wind in that first half and our chances rate greatly improved with it in the second half with the Grimsby goalkeeper James McKeown in inspired form. The home side's Man of the match  denied the Alex substitute Jordan Bowery three times and when he was finally beaten, Tom Lowery’s fantastic shot hit the post and rebounded out. It just about summed up our afternoon.

For the final game of the 2018/19 season, Dave Artell made three changes to the side that defeated Forest Green Rovers in such spectacular style last weekend. Young defender Billy Sass-Davies was handed his second league start at centre-half thus freeing up Ryan Wintle to move back into midfield. James Jones dropped back to the substitutes’ bench.

Harry Pickering made his first return since undergoing a hernia operation to feature at left-back. Nicky Hunt moved back to the bench.

The other change saw leading scorer, Chris Porter, ruled out with a slight ankle injury meaning Lewis Reilly was handed another opportunity, on the final day to enhance his chances for next season.

For a supposed end of season dead rubber, the game started with a quick tempo and was littered with some early fouls. The fast paced start continued with both sides pressing their opposite number and that resulted in the opening minutes being rather cagey. It was evident though that despite some difficult windy conditions, both sides were eager to get the ball down and play the right way.

Early on, a clever free-kick from Perry Ng spotted a midfield burst from Paul Green but the midfielder could only flick his near post cross into the gloves of James McKeown. In the 12th minute, Sass-Davies was booked for a lunging tackle on Joe Grayson before Reece Hall-Johnson forced Will Jaaskelainen into his first meaningful save but it was a fairly easy collect by the young Finn.

The Alex captain Ng joined Sass-Davies in the referee’s black book for a foul on lively wide man Max Wright but from the resultant free-kick, Charles Vernam dragged his shot wastefully wide of the target.

Ng then whistled over a cross to the far post that Kirk would have done well to control on the volley and get on target. Kirk was frustrated after not being played in earlier by Ainley in the original attack. It was more encouraging from the Railwaymen.

On 22 minutes, Crewe conjured up their best opportunity of the early exchanges. A well worked, short corner routine saw the ball quickly played out to Lowery on the edge of the Grimsby box and after he had a touch to set himself, he whipped over a perfect cross that was met full-on by the head of the rushing Green but again he was denied a goal by the well positioned McKeown. The Grimsby goalkeeper got across well to block his downward header with his body.

Vernam went a lot closer with his second effort on goal, forcing Jaaskelainen into a smart save. The young goalkeeper did well to get down and push it over but from the resulting corner, the ball was whipped dangerously close to the line and with Jaaskelainen failing to gather under pressure, the ball dropped at the feet of Harry Davis and he turned it over the line to score against his former club.

Grimsby continued to press though looking for a second goal and they almost got it just after the half an hour mark. There was an almighty scramble inside the six yard box and the persistent Harry Cardwell tried his utmost to force the ball home but he was denied superbly by Jaaskelainen and a combination of Ng and Nolan managed to clear.

A few minutes later though and the lead was doubled but the gome side needed a huge slice of good fortune. From another corner that was just about cleared, Joe Grayson’s attempted cross caught the wind and sailed into the far corner. It was a cross-come-shot but Grimsby had used the advantage of the wind once again.

The home side were brimming with confidence heading into the interval and the excellent Wright again fed Grayson down the left hand side and his far post cross was just too high for Cardell and he couldn’t quite get over it to keep it down.

Crewe needed the half-time break and a chance to regroup and reorganise.

With the wind in our favour, Crewe started the second half on the front foot and Alex Whitmore had to be alert to cut out an early cross from Pickering and the Alex couldn’t make anything of the corner.

Crewe were certainly enjoying more of the ball in the Grimsby half of the pitch but that still didn’t prevent David Artell from making a double change with Jordan Bowery and Aaron Taylor-Sinclair replacing Reilly and Pickering. Bowery had an early chance to pull a goal back after McKeown had made a good save to deny Lowery with a header. Bowery had a great chance to score from close range on the rebound but seemed to knee it back to the Grimsby goalkeeper, who was grounded.

Grimsby’s first real venture into the Crewe half of the pitch saw Sass-Davies react brilliantly to slide in front of Cardwell and deny him a clear opening on our goal. Grimsby’s first caution was handed out to Max Wright for a untimely challenge on Ng. The Crewe captain whacked the free-kick well over the Grimsby goal.

Artell’s final roll of the dice saw Dale replace Ainley. Grimsby also made a change with Martyn Woolford coming on for the Mariners for Clifton.

With 20 minutes remaining, Vernam had an opportunity to make it 3-0 to Jolley’s side but Billy Sass-Davies did fantastically well to throw himself in front of the shot and divert it over the bar. From the corner, Jaaskelainen was fouled after leaving his line to get a clear punch on it.

Minutes later, Bowery was again denied by the well placed McKeown and a chance to stage a late grandstand finish was diminishing by the minute. It was another good chance for Crewe that was failed to be converted by the Crewe number 10.

A wicked corner from Taylor-Sinclair was sliced over his own crossbar by Davis before Kirk fired wide from another corner.

That goal that could have got us back into the contested was just eluding Crewe but the Alex fans continued to sing.

Bowery was denied a hat-trick of good chances when McKeown tipped over his header and the busy Grimsby goalkeeper made a stunning save to push away a sneaky effort from Kirk. It looked like catching him out through a crowd of players but he had spotted it, shuffled across to push it out.

With three minutes left, McKeown was finally beaten by a wonderful effort from Lowery but it just about summed up our afternoon when it rebounded back off the far post. It deserved to hit the post and go in but it just wasn’t our day. Dale whacked the rebound over but he had been ruled off for offside anyway.

It was in fact Grimsby who went closest again to scoring with Jake Hessenthaler’s shot hitting the bar and the rebound was ruled out for offside.

Tickets are on sale now for Crewe Alexandra's final match of the season at Grimsby Town in Cleethorpes on Saturday 4 May, 3:00pm kick-off.

Match tickets will be on sale from Crewe Alex until 3pm on Friday 3 May. Subject to availability.

Official coach travel is also available to purchase online (£20/£21) - departing from the Alexandra Stadium at 9:15am.

Tickets will be on sale until 3:00pm on Friday 3 May, subject to availability.

Tickets are will be on sale via the online box office soon. Click here to purchase.

Official coaches depart from Gresty Road at 9:15am and are priced at:

Click here to check out the Grimsby Town guide on https://www.awaygames.co.uk