Despite those two results, The Alex are unbeaten in the previous four away games after draws at Morecambe, Macclesfield & Oldham & a win at MK Dons.

However, those two Gresty Road defeats have left the play-off hopes looking extremely slim, with a victory at Tranmere a must to keep up any hopes of making the end of season picture.

Rovers though are on fine form currently & occupy a coveted play-off position. They've won four of their last five matches, last losing on 5 February at home to the Cobblers.

Crewe have won both previous meetings with Rovers so far this season, 3-2 in the reverse league fixture at Gresty Road in November as well as 4-3 at Prenton Park in the Checkatrade Trophy in September.

The Alex will have to be at their very best to make it a hat-trick of victories over Tranmere come kick-off.

Crewe: James Jones could come into contention after playing 70 minutes for the Under 23s at Millwall on Tuesday on his return from injury.

Harry Pickering, Nicky Hunt & Aaron Taylor-Sinclair could also come back into contention after missing the defeat to Northampton last week with minor problems.

Tranmere: Kieron Morris missed last weekend's win at Exeter with injury & it's unknown whether he'll be in contention for a return. Jonny Smith came into the side & could keep his place following the 1-0 win.

Rovers are in fine form currently & have their sights firmly set on the play-offs, currently occupying sixth spot in Sky Bet League Two.

Five teams, including Tranmere, are separated by just two points in & around the play-off places - every game counts between now & the end of the season.

Live Video/Audio: The match IS available on iFollow for live streaming in the UK. (Click here for more info) 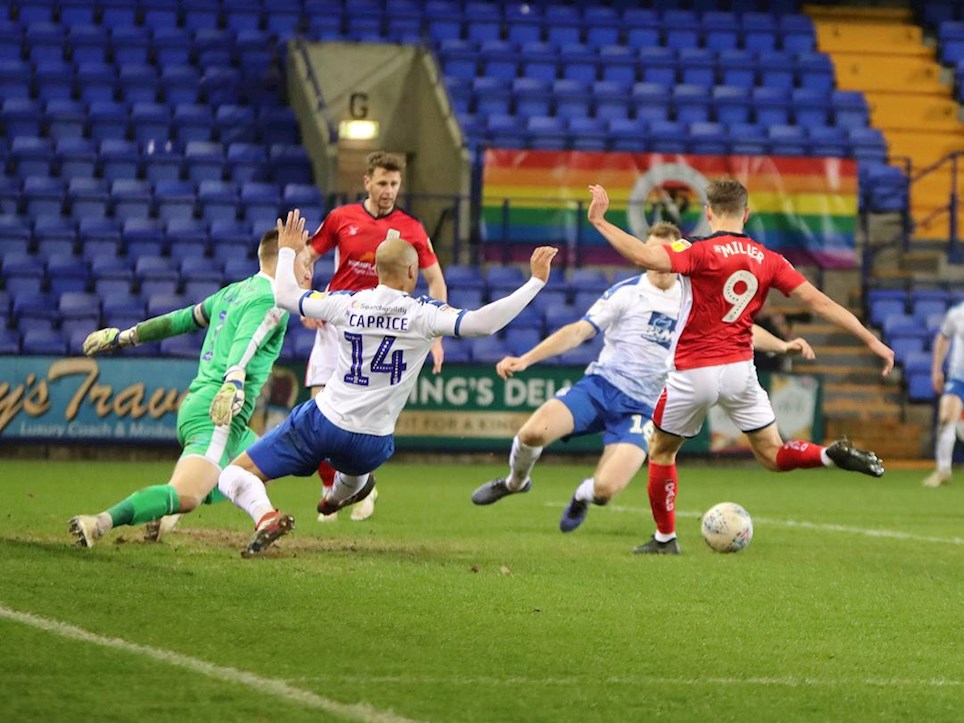 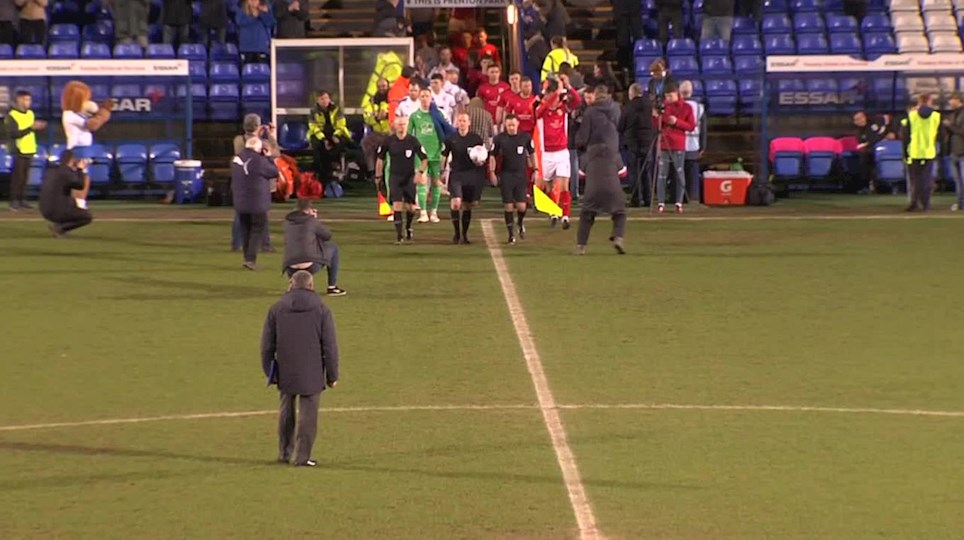 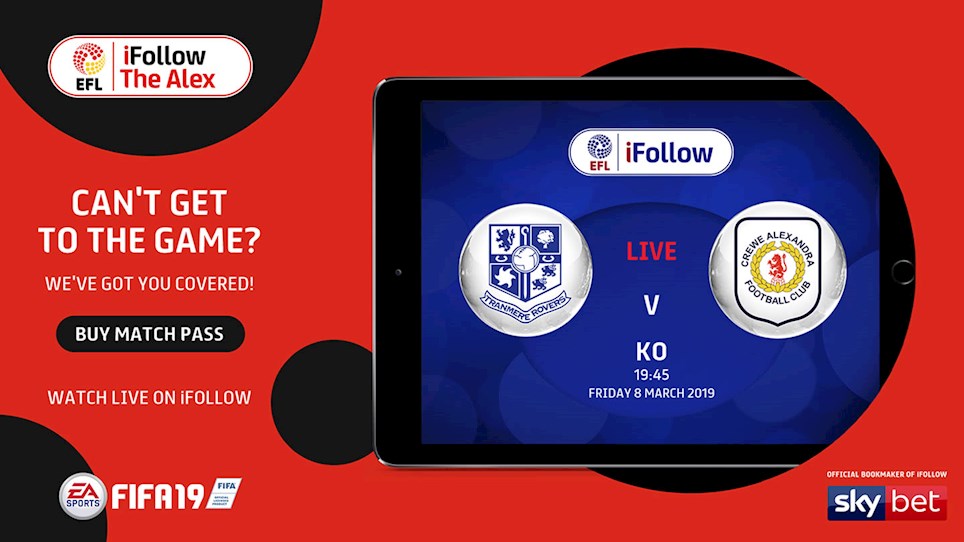 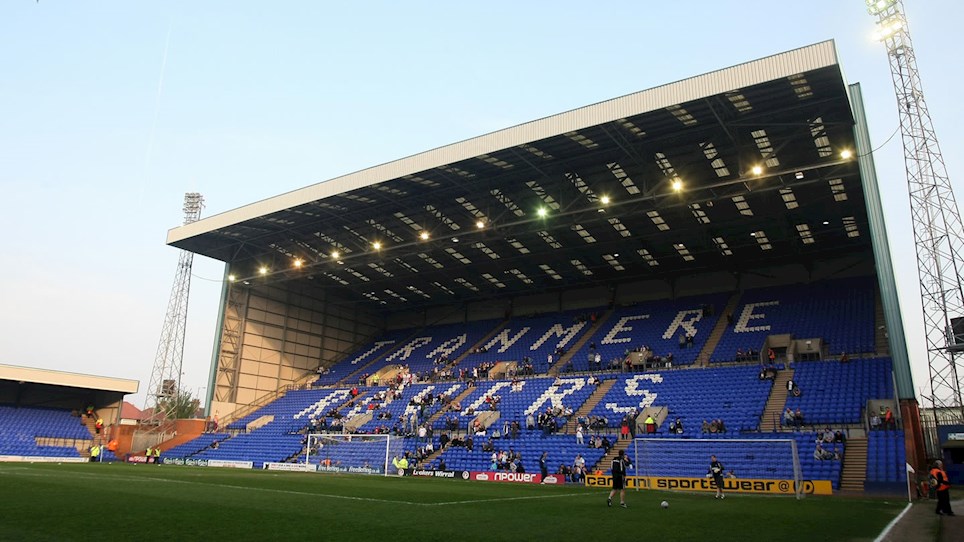 Crewe Alexandra’s outside chance of sneaking into the play-offs were dealt another blow as we suffered our third successive defeat away at Tranmere. Following on from consecutive home defeats to Exeter and Northampton Town, a goal from Tranmere’s clinical finisher James Norwood with 19 minutes left proved to be the difference this evening.

Norwood, who had earlier squandered an easier chance by his standards and rifled a shot off the Crewe post minutes into the second half, broke a stubborn Crewe defence with an accurate low shot past Ben Garratt. Norwood had anticipated a long ball played in his direction, stole behind our back line and slipped home for his 26th goal of the season.

Crewe created half chances for most of the night with Chris Porter heading at Scott Davies early on and we had two decent shots for a penalty when Porter and Ray looked to have been impeded. Our best chance of the night fell to substitute Shaun Miller with three minutes remaining though. The striker controlled a wonderful cross from Ryan Wintle but his close range shot was blocked by a relieved Davies and deflected behind for a corner.

Crewe Alexandra boss David Artell altered his starting XI by making two changes for the Friday night trip to Prenton Park. The Railwaymen were handed a major boost with the return of midfielder James Jones from injury. The Scotland Youth International had missed the last six matches after landing awkwardly on his ankle at MK Dons.

The return of Jones resulted in a positional change for Callum Ainley, who was pushed further forward in place of Jordan Bowery. It was the first time Bowery had not started since the FA Cup tie against Carlisle United back in November.

The encounter kicked off in a fantastic atmosphere with both sets of supporters making plenty of noise inside Prenton Park. A frenetic start to the proceedings saw both sides presented with early chances. Chris Porter won his first heard of the night to head downwards and into the gloves of the Tranmere captain and goalkeeper Scott Davies, before the home side wasted a glorious chance after just two minutes.

Jones played the ball back to his skipper George Ray and there appeared little danger but Connor Jennings applied a press and actually appeared to shove the defender into a mistake. Ray protests fell on deaf ears with referee Martin Coy and Ray’s under struck back pass went straight to James Norwood.

The league’s leading marksman had a lot more time than he had anticipated and could have lifted it over an advanced Garratt, but he uncharacteristically rushed his execution and dragged it wastefully wide. It was an almighty let off for Crewe and it would have been interesting to witness our reaction if Norwood had found the net like he should have. It looked a foul on Ray.

Following those two early chances, the game levelled out and settled down.  Jonny Smith was presented with another sight of the Crewe goal on 13 minutes but Pickering tracked his run, forced him a touch wide and he fired wide of Garratt’s left hand post.

Tranmere continued to press Crewe high up the pitch, so our best outlet was beginning to be the longer ball up to Porter.  Sometimes we worked well off him and other times not so much, as we surrendered possession too easily at times after Porter had contested aerially with either Ellis or the mountain Manny Monthe.

David Perkins was the first offender to be booked for a sliding tackle into Jones close to the touchline.

On 27 minutes, Bakayogo misjudged a deep cross from the left, allowing the ball to drop over his head and Porter reacted well enough to collect but from a tight angle, his shot was pushed behind by Davies for a corner.

With the game evenly poised, Crewe were just lacking that quality final ball into the Tranmere box. The Railwaymen were beginning to enjoy good periods of possession in-and-around the opposition penalty area but we were trying to force it a bit too much with the longer, final ball. Porter was border line offside with a couple of tight decisions.

On 38 minutes, Tranmere were forced into a change with Bakayogo forced off through injury, to be replaced by Adam Buxton. The new introduction was soon involved with a surprise shot from distance that Garratt had to gather.

Just before half time, a wicked free-kick delivery from Pickering was perfectly aimed for the far post and Porter looked to be favourite to get their first and nod home. The Alex forward felt he had been impeded in his attempt to reach it and Crewe may well have had a case for a penalty. Referee Coy waved away the appeals.

The second half began with one of the finest tackles you will ever see by Paul Green on the edge of the Tranmere penalty area and after he had kept the play alive, Ng’s cross from the right hand side had to headed out by Monthe.

Ainley then a chance to find Kirk on the opposite flank following a swift counter attack but his final pass was just too central and Davies positioned himself to collect the through ball.

Tranmere’s first real chance of the second half came on 51 minutes after a bobbling ball inside our penalty area dropped invitingly for Norwood and he rattled the Crewe post with a powerful shot. The majority of the home support had backed him to score but it thundered off the post and away to safety.

Two minutes later, Crewe had another strong appeal for a penalty waved away. On this occasion, Ray took a touch inside the Tranmere box and was tripped as he tried to latch onto it again. The Crewe players were incensed again but the referee once again was not interested.

The game continued to ebb and flow nicely with both sides looking a threat going forward. The atmosphere certainly added to a wholehearted contest.

Tranmere’s Micky Mellon made his second change on 64 minutes with Smith making way for Ollie Banks. Ng shot wide from 25 yards after being allowed to carry the ball further than their backline would have wanted.

Another good chance was carved out for the home side by Buxton on the Crewe right. He tricked his way past Ainley before his clever pull back was poked high and wide by Jennings. He was soon booked as well for a foul on Jones in the centre of the pitch.

With just under 20 minutes remaining, Tranmere finally broke the deadlock and it was third time lucky for Norwood. After a long ball up the pitch, he found enough space away from the Crewe centre-halves to take a positive touch and then slide his tidy finish past Garratt for his 26th goal of the campaign. After missing a good early chance and hitting the post, it was no real surprise that it was Norwood putting the home side 1-0 up.

David Artell instantly made a change with Bowery replacing Kirk. Crewe were still in the game but now Tranmere, who had kept three clean-sheets in their last four games had something to protect.

Tranmere made their third change with Harvey Gilmour replacing Ben Pringle. Crewe’s second sub saw Miller on for Green. Dale also came on late on for Ainley as we went for broke.

Entering the final ten minutes on the Wirral, Crewe desperately needed to conjure up some genuine chances to salvage something and keep our outside chance of a top seven finish alive.

That big chance did come in the 87th minute. Crewe’s golden chance fell to Miller after he was picked out wonderfully well by Wintle’s accurate cross. He took a touch but within the six yard box, Miller saw his shot blocked by the Tranmere goalkeeper Scott Davies virtually on the line and our chance of a point slipped away with that late action.

The initial allocation of 530 tickets for Friday night's trip to Tranmere Rovers has sold out. There will be no further tickets available from Crewe Alexandra.

Supporters who want to attend the game now have three options.

1) Purchase tickets at www.trfctickets.co.uk/visiting-supporters for the cheaper advanced price & print your tickets at home - There will be no collections at Prenton Park.

2) Pay-on-the-day at the away ticket office at Prenton Park at the match day price.

*ID with DOB on is required to purchase

Official coaches depart from Gresty Road at 5:15pm and are priced at:

Click here to check out the Tranmere guide on https://www.awaygames.co.uk