Crewe Alexandra are looking to score for the first time in four games when Crawley Town come to Gresty Road on Saturday.

The point did arrest a run of three defeats, with the Alex now hoping to return to the winning front when the Red Devils come to the Alexandra Stadium.

Crawley have lost just two of their last eight games, picking up four points in their last two with a victory over Grimsby & scoreless draw with Mansfield.

Crewe lost the reverse fixture 3-0 in West Sussex earlier this season in a match that David Artell often refers to as the best Alex performance of the season - despite the result.

Crewe don't have any fresh injury concerns ahead of the match, but Tommy Lowery could be in line for a start after his performance off the bench in midweek.

Aaron Taylor-Sinclair too comes back into contention as do Nicky Hunt & Alex Nicholls who came back into the squad at Cambridge.

Crawley: The visitors lost their last away match 1-0 at MK Dons & drew the previous contest 0-0 at Northampton.

Form has been patchy in recent months, never knowing which Crawley team is going to turn up.

They didn't pick up any fresh injuries in the home 0-0 draw with Mansfield on Tuesday night, so the Reds could be set to name the same side, or mix things up in a bid to start scoring more goals. 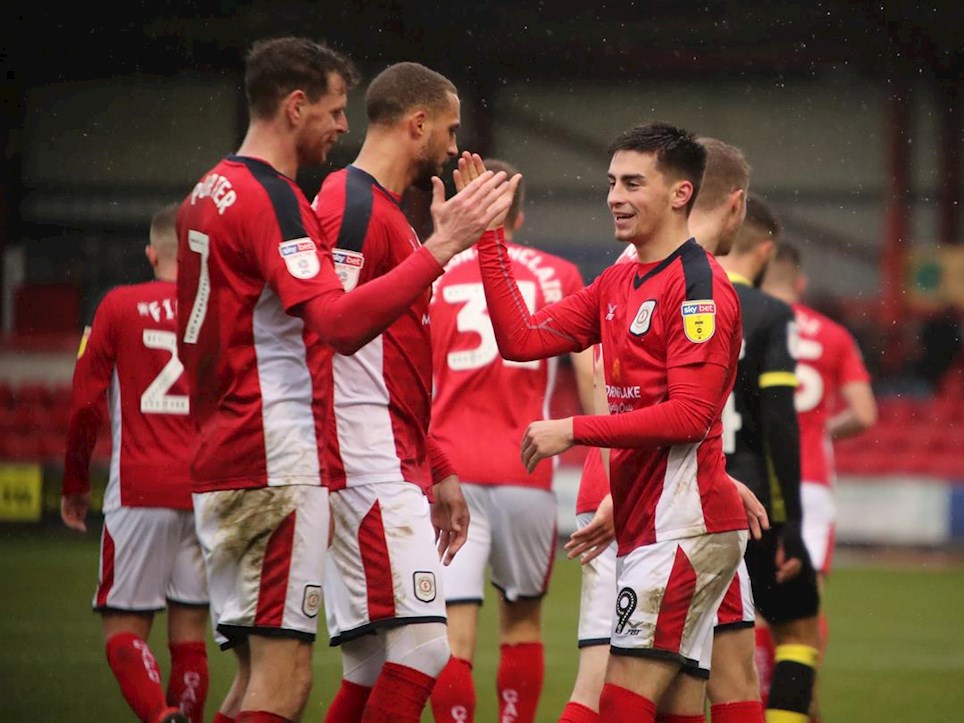 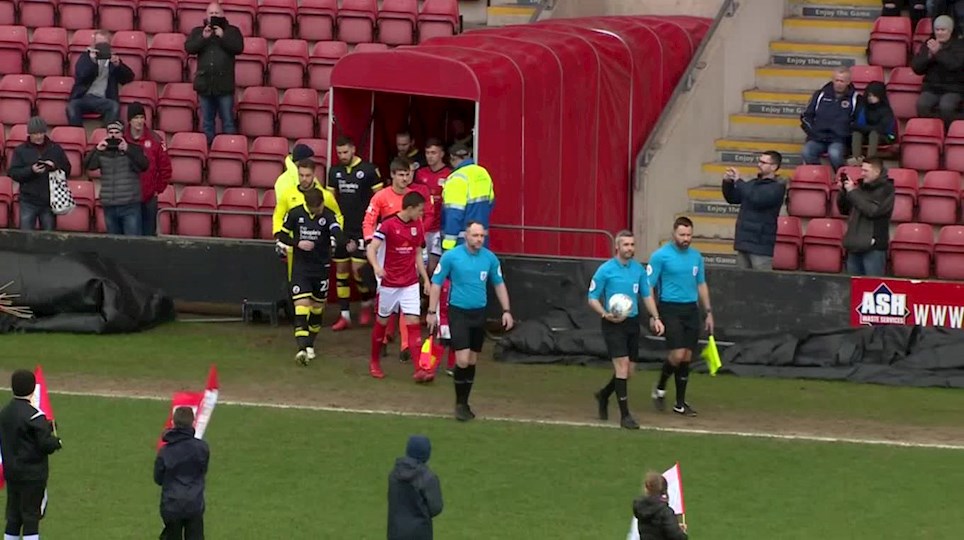 David Artell promised an open game at Gresty Road this afternoon and that is exactly what we got as Crewe Alexandra stormed to an emphatic 6-1 win over Crawley Town.

Crewe hit six goals at Gresty Road for the first time since the opening day of the season against Morecambe and had to do it after going behind to an early penalty converted by Ollie Palmer.

The Railwaymen reacted in perfect fashion and a spurt of five goals in 11 minutes blew the Red Devils away to put us 5-1 up with just minutes of the second half gone and substitute Owen Dale finished off the rout with a stunning sixth goal. Dale saved the best goal until last with a fantastic strike to register his first at senior level.

It could have been even more as well with Chris Porter having another tap in ruled off for a tight offside and Paul Green smashing the crossbar with a wonderful volley.

On a bad afternoon for Crawley, the visitors also had their substitute Ibrahim Meite sent off for an aimed elbow into the ribs of Eddie Nolan.

After four games without a victory, David Artell made four changes to the side that earned a hard fought draw at Cambridge United on Tuesday evening. With captain George Ray suspended for two games due to that 10th yellow card of the season at the Abbey Stadium, there was a recall for the versatile Nicky Hunt at centre-half.

Shaun Miller, Callum Ainley and James Jones all dropped to the substitutes’ bench with recalls for Ollie Finney, Jordan Bowery and Charlie Kirk.

Crewe Alexandra got on the front foot quickly with Ollie Finney forcing Glenn Morris into an early save and his midfield partner Ryan Wintle having a fierce drive blocked on the edge of the box.

The Railwaymen controlled the early exchanges and were passing the ball around with great confidence. Some neat interchanging nearly saw Bowery take the ball in his stride but he was just denied by Joe McNerney.

After such a bright start from Crewe it was therefore a surprise to actually see Crawley breaking the deadlock but we only had ourselves to blame. Filipe Morais swung over a cross from the right hand side and Ng fell clumsily on the back of Reece Grego-Cox and the referee was right to award a penalty. Crawley’s top scorer, Ollie Palmer rolled the resultant penalty past Ben Garratt for the opening goal. It was against the run of play and Crewe must have been worrying about having a repeat of what happened to us down in Crawley back in November.

Ng quickly tried to make amends but his spinning shot missed the far corner before Crawley went in search of a second goal. Reece Grego-Cox was close to poke home a cross from close range before Garratt made a smart save from Palmer.

Crewe continued to attack looking to level but also had to keep things secure at the back. Crewe tried to walk a few chances in instead of shooting. Pickering did flash a great shot just wide that drew applause from the home crowd and Porter was close to reaching a couple of superb through balls from the excellent Finney and Kirk.

The Alex’s persistence in the final third finally told on 36 minutes and there was a big slice of luck coming on our behalf because after Pickering’s crossfield pass was clearly controlled by the hand of Ng to take him past David Sesay. The referee let play continue and he fed Bowery. He confidently took it into the box before drilling it past Morris via the post.

That sprung Crewe into a blitz of goals to end the game as a contest before the half time whistle. Kirk did the approach play for Crewe’s second goal after trying to reach the by line and his dangerous cross hit Tom Dallison to deflect it home.

Crawley were rocked to the rafters after seeing their slim lead slip away so quickly and after more good play from the assist maker Kirk, his shot was saved by Morris and after falling to Bowery, he laid the ball to his team-mate Porter for him to tap home from two yards out. Crawley claimed offside, he wasn’t.

There was a fourth to come before the break as well. On 42 minutes, McNerny dallied into possession and the alert Green stole possession from him before he raced through and rolled it comfortably past a helpless Morris. It was Green’s first goal in open play for the club following his penalty in the 4-1 win at Lincoln.

Crewe didn’t rest on their laurels despite the fantastic scoreline. We started the second half as we ended the first half and after Ng had found Kirk with a low cross, the winger helped himself to his 8th goal of an impressive season.

It was vintage stuff from Crewe and Crawley couldn’t cope with our football and movement. They were on a damage limitation job but they also kept Garratt busy with a number of decent chances too. Garratt stood up well to make some superb saves to deny Palmer and substitute Ricardo German.

Crewe went in search of more goals and Finney and Wintle deserved one for their own individual performances. Finney hit a superb curler that had to be tipped behind by Morris for a corner and Wintle also went close.

Green went even closer to a sixth goal with a fantastic volley that struck the crossbar. If that had gone in from Dale's corner then we would have had another contender for goal of the season.

Finney was denied another goal after another fine save by Morris before the Crawley sub Meite was sent off for an off the ball elbow on Nolan. It made their afternoon even worse.

Dale completed the scoring with a stunning sixth goal. His first touch was excellent and after a smart turn, he unleashed a fantastic shot for his first senior goal.

We went in search of a seventh goal and Porter had the ball in the net after a good cross from Dale but the assistant referee had his flag up.

Wintle also went close when he drilled another late effort into Morris’s mid-drift.

Boss David Artell has regularly gone on record to say he believed his side's performances was one of the best produced this season despite the defeat.

The Alex had been on a five match winning home run before the two recent defeat to Exeter City and Northampton Town.

Crawley haven't scored in their last two games on the road, losing at MK Dons & drawing at the Cobblers.

The match takes place on Saturday 16 March at the Alexandra Stadium with a 3pm kick-off & the team need your backing to return to winning ways!