Crewe Alexandra are looking to keep alive any lingering play-off aspirations by defeating a Cheltenham Town side who have struggled on the road in recent months.

The Robins have lost their last six consecutive away games in Sky Bet League Two, last picking up any points with a victory at Yeovil on New Years Day.

Contrast to that, their home form has been superb with six wins in their last seven. With the match taking place at Gresty Road, Dave Artell will be hoping to take advantage of the opportunity to push on further up the table.

Now sitting in the top half of the league in 12th, Crewe are still eight points of a play off place, but a string of wins could see the climax to the season become an exciting one.

The sides being chased in sixth & seventh are Forest Green & Exeter, and they both face high-flying MK Dons & Mansfield Town this weekend in what could be a key development in the promotion race.

Crewe: The Alex will be without left-back Harry Pickering who has had a hernia operation, whilst goalkeeper Dave Richards will miss the remainder of the season with a shoulder problem.

George Ray is available again after serving his two-match suspension, but boss Dave Artell faces a tough decision on his team selection with the side winning both of those last two games.

Callum Ainley too is pushing for a recall after netting a brace off the bench at Mansfield last week.

Cheltenham: Former Alex academy man Billy Waters could return to the side having been ineligible to face his parent club Northampton Town last weekend.

Ryan Broom could miss out with a hamstring problem but Jordan Forster could feature after injury, playing 80 minutes of a reserve game earlier this week.

The Robins are determined to turn around that run of six away defeats on the bounce & they could move up two places from 17th to 15th with a victory.

Not in danger of relegation or threatening the promotion race, it's a pressure-free end to the season for Michael Duff's men. 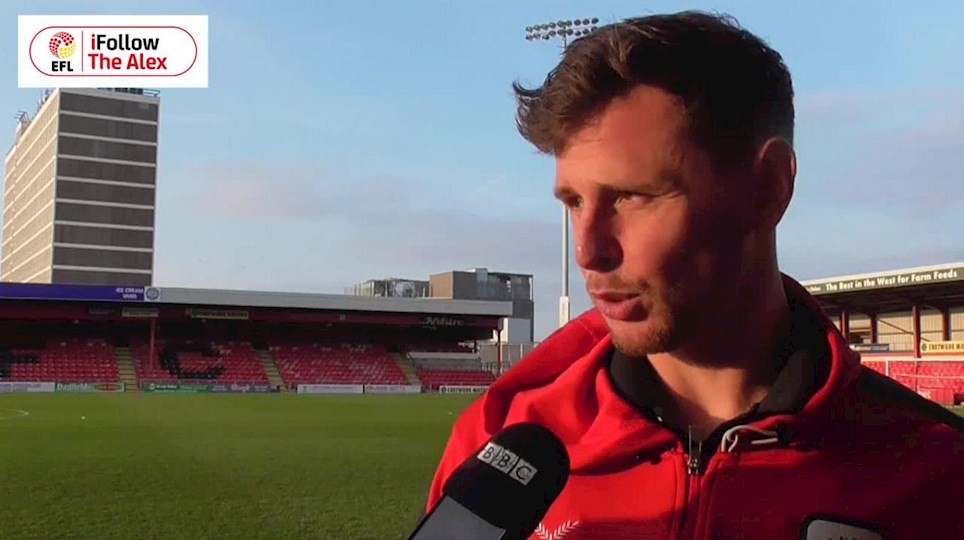 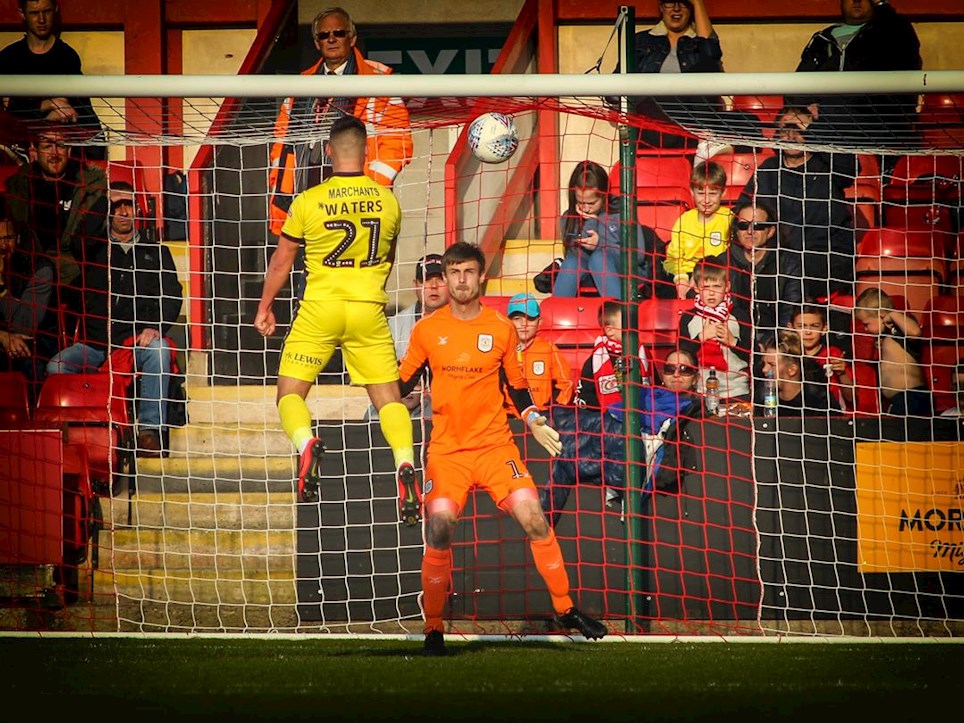 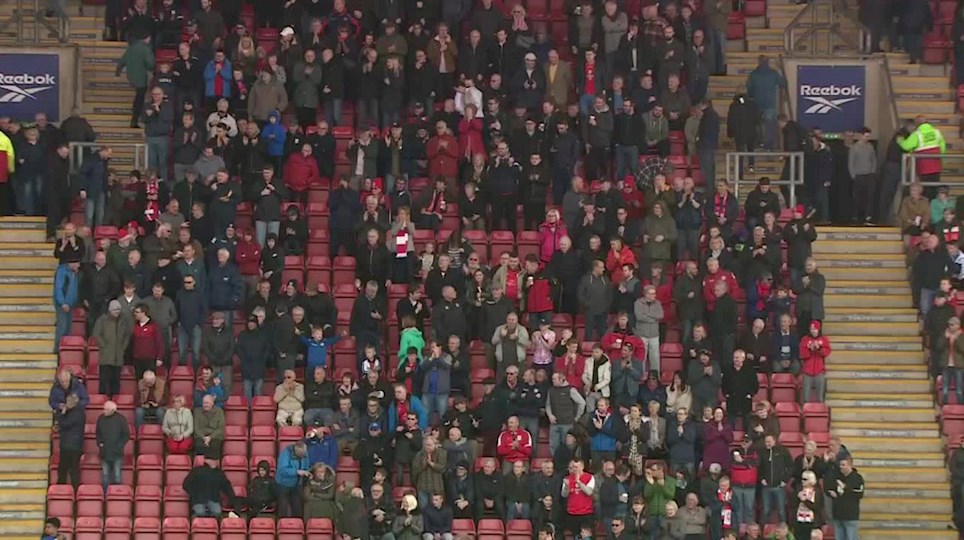 Crewe old boys Billy Waters and Luke Varney returned to their old stomping ground to help inflict a 3-1 home defeat on the Alex and virtually end our hopes of breaking into the top seven. With results going our way today, we could have been down to just five points off their final play-off place, but everything went against us on the pitch.

It had started so well as well with our Man-of-the-Match Aaron Taylor-Sinclair firing us into the lead just after the half an hour mark but a controversial equaliser converted by Kevin Dawson in first half stoppage time was followed by a George Ray red card for two bookable offences just after half time to turn the game on its head.

Waters sprung off the bench to make it 2-1 on 71 minutes and Varney finished off a fine counter-attack from the visitors to finish superbly with seven minutes left and leave Crewe with a rare home defeat.

Crewe had to play the majority of the second half with ten men but we were still in the game until Varney's excellent finish ended our hopes of a dramatic comeback.

David Artell had the luxury of making three changes to the side that so impressively at Mansfield Town last weekend. Callum Ainley’s well taken brace as a substitute at the One Call Stadium propelled him back into the starting XI.

Charlie Kirk was also recalled after being rested against The Stags last weekend. Captain George Ray also returned to the starting line-up after serving his two-match suspension for accumulating 10 bookings. The rather unfortunate Alex players to drop back out of the side were defender Nicky Hunt and midfielders Ollie Finney and James Jones.

The former Crewe Alexandra forward Luke Varney started for Cheltenham Town, as did our former Academy graduate Chris Clements. Billy Waters began on the bench but would change the game with his header.

Crewe tried to get on the front foot as soon as possible but it was a tentative opening from both sides and genuine chances were not forthcoming. The Railwaymen certainly enjoyed the better of the possession but we were just lacking that penetrative final pass or cross.

Michael Duff’s Cheltenham side looked for the agility of Luke Varney at any opportunity. He won his fair share of flick on’s and Tyrone Barnett flashed a header from a Chris Hussey free-kick just wide. It was a decent chance as the striker had beaten the onrushing Garratt to the cross.

An early piece of skill from Kirk saw him whip a cross over that was just beyond everyone. Moments later, another ball from Kirk just wouldn’t bounce nicely for Bowery or Porter. Porter also headed a Perry Ng cross over the crossbar but he was offside.

Varney nearly nodded a ball through to Kevin Dawson and Hussey was a menace with his left foot. He provided some testing balls from the left flank.

Eddie Nolan was excellent for Crewe Alexandra and read the play so well, as usual. Ray was booked for a foul on Dawson and it would prove costly later on when he would lunge into the same player in an attempt to win the ball back.

Crewe finally broke the deadlock on 31 minutes. In the first phase of play, Ray switched the play to find Kirk out on the left hand touchline and after an exchange of passes between Green and Taylor-Sinclair, the ball was cleared by the head of Ben Tozer, but Cheltenham did not complete the clearance sufficiently enough and the Alex left-back kept the ball alive and drove a superb shot across the goal and into the far corner of the net. It was his first goal for the club on his full home debut.

The opening goal gave Crewe a boost and a touch off from Bowery saw Wintle drill a shot come cross a yard wide of the far post and from a corner, Green fired a shot from 25 yards straight at Scott Flinders.

Crewe kept pushing looking for a second goal ahead of the half time interval but it was Cheltenham who would level before the break.  There was some real controversy in the build-up because there was certainly a handball that prevented a pass from Green from going forward. Cheltenham broke up the other end in the midst of loud protests, Varney slipped in Dawson and he fired accurately past Garratt in first half stoppage time. Crewe were angered by the decision and Ng was booked for dissent.

Ray’s lunging tackle into Dawson just minutes into the second half left him injured and the second yellow card was shown whilst he was grounded. Crewe were down to ten men and had close to 40 minutes to get through. There was no argument.

Wintle intially switched to centre half before Artell took off creative wide men, Kirk and Ainley to make us more athletic in midfield with Jones and Hunt coming on.

Cheltenham also introduced Waters and Jacob Maddox. Crewe continued to defend their box reasonably well and kept the ball well when we had it but it was always going to be an uphill struggle.

Crewe kept them out until the 71st minute and it was a poor goal to concede from our point of view as Waters was left unmarked in the centre of our goal from Hussey’s cross and he powerfully headed past Garratt.

The last switch saw Green make way for Miller as we still chased the game but Cheltenham would finish us off with a counter-attacking third goal on 83 minutes. From our own corner, the ball was played out to the right wing to Waters and he hit an excellent cross field pass to Varney and he hardly broke stride to drill it past Garratt. To his credit, the former Crewe favourite didn’t celebrate.

Wintle, who was one of our bright players on the day kept plugging away and he had a firm shot blocked. Bowery also had a shot blocked as we huffed and puffed to try and get a goal and a late passage into the game but it never materialised.

It could have got even worse for Crewe when Miller tripped sub Jacob Maddox when he raced through the middle of the pitch. The Cheltenham player protested for a red card, Miller received a yellow and can face the Valiants next week. Ray, sadly won’t be as he faces another ban.

The Robins currently sit five places & five points below Crewe in 17th in the table & are looking to continue their own run of one defeat in their last four games.

Earlier in the season, the teams played out a goalless draw in the reverse fixture, but last seasons meeting at Gresty Road was on the final day of the campaign - Crewe's Academy XI running out 2-1 winners.

The match takes place on Saturday 30 March at the Alexandra Stadium with a 3pm kick-off & the team need your backing to keep the good run alive.