Crewe Alexandra head to Cambridge United looking to arrest a run of three straight defeats in what is the final Tuesday night match of the 2018/19 season.

Form has taken a nosedive after going seven unbeaten throughout much of January & February with realistic play-off hopes now all-but extinguished.

Perhaps more alarmingly though is the fact that the goals have dried up in recent games, just one scored in those three defeats.

However, despite the last three results, the team showed positive signs at Tranmere on Friday night & could easily have come away with a more rewarding result.

Cambridge United still have one eye over their shoulder at the relegation places, but four points in their last two games now have them ten clear of the drop zone.

The U's are in terrific form on their own patch - just one defeat in their last 11 at the Abbey Stadium. The Alex will have to be at their best to record all three points.

Crewe: Aaron Taylor-Sinclair has returned to training after a slight knock kept him out of the Northampton & Tranmere matches.

With his imminent return, boss Dave Artell is set to have an injury-free squad to choose from & could shake things up further after losing three on the bounce.

Cambridge: The U's drew 1-1 on their home turf against Paul Scholes' Oldham on Saturday to follow up their 2-0 win at Grimsby the previous week.

They've conceded just six goals in their previous eight games at the Abbey Stadium, so it may prove a stern test for the Alex to break down their defensive resolve.

They could remain unchanged for a third straight game having lined up with the same XI for both those Oldham & Grimsby clashes.

Live Video/Audio: The match IS available on iFollow for live streaming in the UK. (Click here for more info) 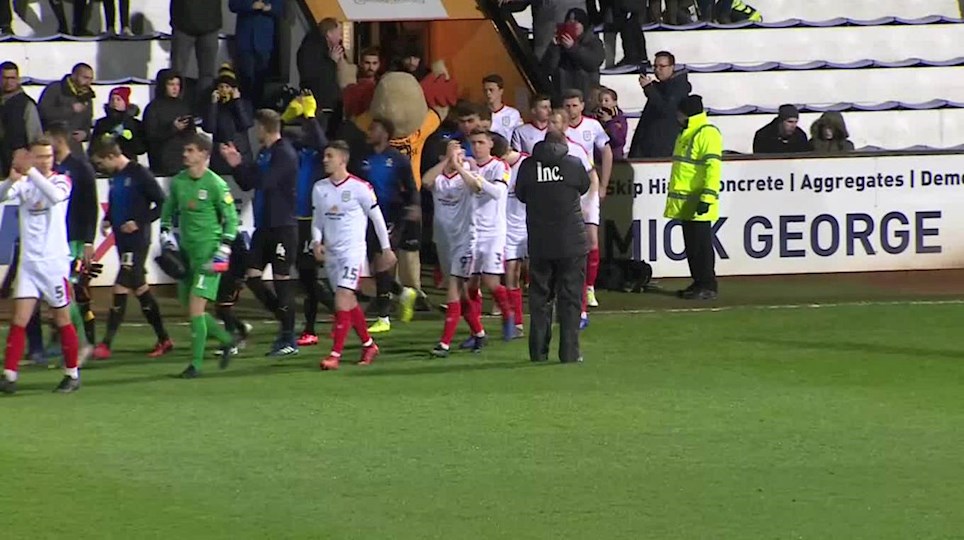 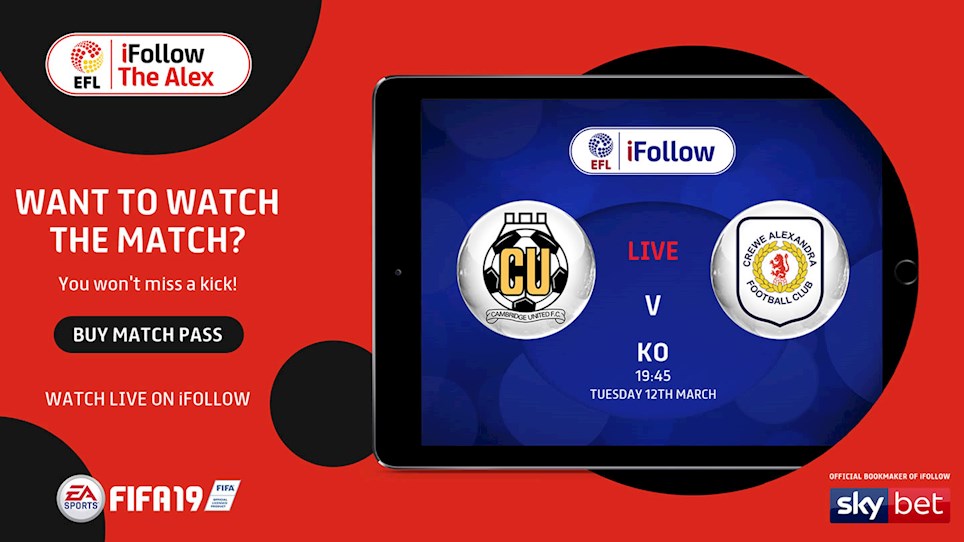 Crewe Alexandra & Cambridge United played out a goalless draw on an entertaining evening at a bitterly cold Abbey Stadium.

Shaun Miller & Chris Porter had golden chances in either half to make the difference but both couldn’t put their shots on target from close quarters.

David Artell made one change to the starting XI that lost 1-0 at Tranmere Rovers on Friday night, Shaun Miller replacing Charlie Kirk as the formation switched to an unfamiliar 4-1-3-2.

Nicky Hunt & Alex Nicholls returned to the bench too in place of Jamie Sterry & Owen Dale.

It was a fast-paced start to the evening with the U’s intent on attacking from the outset in front of their home supporters. Harrison Dunk & Jevani Brown caused mischief down the flanks with their pace, Dunk having a shot from the edge of the box blocked inside the first minute.

Despite having to soak up much of the early pressure, Crewe looked dangerous on the counter-attack & twice forced good openings with Chris Porter & Shaun Miller both being played into the box – Porter forcing Mitov into a low save down to his left.

As the half wore on, The Alex gained a stronger foothold & Porter forced U’s stopper Dimitar Mitov into a smart save down to his left when he was played in down the left of the box – but his left-footed shot lacked the power to make it past the Bulgarian.

Another swift Crewe counter saw Paul Green play a delightful pass through the lines to set Miller into the box, but he chose to go down to the by-line & his overhit cross sailed by.

The chance of the half came Miller’s way six minutes shy of the half-time whistle - & what a chance it was. Callum Ainley did superbly to carry the ball from a defensive position & bound into the U’s half. He then waited a moment before playing a perfectly timed low ball into the box for Miller to hit first time, but he spooned the effort high over the top.

Crewe came out in the second period in an impressive manner & monopolised the play for the opening 15 minutes, creating several dangerous positions.

Ainley cut in from the left & curled a 20-yard shot over the bar as the Alex looked most likely during that period.

Cambridge United began to mount pressure & took control of the contest, thanks to a double substitution by Manager Colin Calderwood. Getting ahead of steam, The U’s pressed & probed down the flanks, but the Crewe defence stood firm to keep the hosts at bay.

George Ray picked up a 66th minute booking for late foul on sub Rushian Hepburn-Muprhy in the corner. The card was his tenth yellow of the campaign, meaning he’ll now face a two match suspension, missing the upcoming Crawley & Mansfield matches.

Heading into the final 20 minutes, Crewe regained the ascendency & had a couple of golden chances to win it.

The moment of the match came & went for Porter with 84 minutes on the clock, Jordan Bowery decoying to allow a pass to run through to his strike-partner inside the box. Will all the time in the world, he side-footed his ten-yard shot wide of the near post.

In the 88th minute, the impressive Tommy Lowery, who replaced James Jones midway through the half, then created space for himself down the left, putting the defender on the deck with his trickery before putting over a sublime drive cross. Oli Finney & Porter were both there to try & force it home, but George Taft somehow looped it away for a corner.

It was an evening of fine margins at The Abbey Stadium, but neither side could net the elusive goal with the match ending scoreless.

Match tickets are on sale from Crewe Alex until 5pm on Monday 11 March. Subject to availability.

Official coach travel is also available to purchase online (£18/£19) - departing from the Alexandra Stadium at 3:00pm.

Tickets will be on sale until 5:00pm on Monday 11 March, subject to availability.

Official coaches depart from Gresty Road at 3:00pm and are priced at:

Click here to check out the Cambridge guide on https://www.awaygames.co.uk