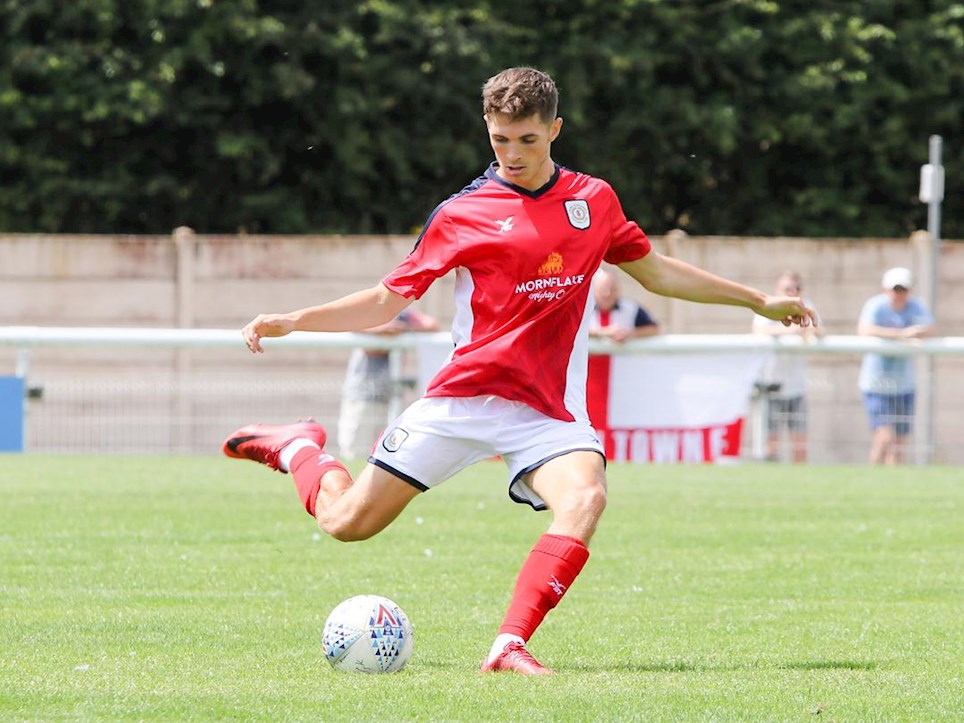 Following a behind closed doors match against Championship side Wigan Athletic in mid-week, Crewe Alexandra travelled to local neighbours Nantwich Town for another useful work-out in the summer sun.

Crewe won the game 1-0 thanks to a well worked goal between forwards Shaun Miller and Jordan Bowery in the first half. Miller dug out a cross in the 40th minute for Bowery to power home for the only goal of the game.

David Artell used the early opportunity to allow his squad to get minutes under their belt and he utilised his numbers by giving most of them 45 minutes each.

The club’s new signing Alex Nicholls was not involved after only completing his move from Barnet yesterday. The former Bolton Wanderers defender Nicky Hunt, who is on trial with the club, started at right-back with Perry Ng partnering George Ray in central defence.

The Dabbers had the former Crewe youngsters Jamie Morgan, Toby Mullarkey and Caspar Hughes in their starting line-up. The former Crewe striker Steve Jones started on the bench after spending part of the summer helping the England senior team win the World Cup in Thailand.

Nantwich had an early threat from a free-kick but Matt Bell’s delivery was well cleared by George Ray as bodies flung themselves at it at the far post.

Jordan Bowery threatened to get away after receiving a pass from Hunt but the covering Joel Stair made a timely challenge to halt him in his tracks. From our first corner, Miller turned on a knock down from Ray but his shot was blocked and eventually cleared up field.

Bowery showed great pace and strength to manoeuvre Stair off balance inside the box, and after firing his shot into the floor it was saved at the second attempt by the Dabbers goalkeeper Andy Wycherley. Bowery also had a shot blocked on the edge of the penalty area after he was found by Kirk.

Kirk was denied by Wycherley from close range after Crewe’s best passing move of the opening half an hour. Kirk was found by Pickering but probably didn’t make a clean enough connection to make sure of executing the opening goal.

Crewe eventually took the lead on 40 minutes after a well worked goal. A diagonal pass from Ng found Miller on the left hand side of the box and the striker showed great patience and trickery before producing an inch perfect cross for Bowery to climb and head home. Miller did superbly well with the assist and Bowery’s powerful header gave Wycherley no chance.

As expected a fresh eleven appeared for the second half with the likes of Garratt, Walker, Nolan, Ainley, Green and Porter all introduced at the break.

Youngster Regan Griffiths showed some confident touches after being introduced and his perfect through ball found Porter through on goal but the experienced striker had just taken a step offside. The Crewe youngster was also denied a shot at goal himself by a last ditch tackle from the covering Jamie Lawrie.

Crewe continued to have the lion’s share of the possession and we played some neat one and two touch football in and around the Nantwich box. The only thing was lacking was a killer through ball to the two forwards, Chris Porter and Lewis Reilly.

At the other end, Walker, who was operating as a centre-half cleared well with his head for a Nantwich corner. From the resultant delivery from the right, the ball fell invitingly to Dabbers captain Hughes but his well struck shot drifted just wide. It had Garratt keeping a close eye on it.

Griffiths settled in well and was busy in his approach. He whistled one just over the Nantwich Town crossbar after a tidy twist and turn away from Nathan Cotterill.

The height of Clayton McDonald offered a fresh threat at set-pieces but Crewe dealt with it with purpose. Jones was also introduced for the home side.

Reilly had a good chance to make it 2-0 but was denied inside the Nantwich penalty area before Joe Malkin blazed over on the counter attack for the Dabbers. Our former youngster Toby Mullarkey was presented with a good chance to equalise but his side footed shot was straight at Garratt.

A mazy run from Malkin saw him evade an array of Crewe challenges inside the box before his lifted shot was saved by Garratt. Nantwich were growing in confidence as the game entered his final third.

Ainley should have had a free-kick after being blocked off on the edge of the box before his low shot was collected by a well-placed Nantwich goalkeeper.

That elusive second goal never materialised with a late cross/shot from Ainley just evading Porter at the far post.