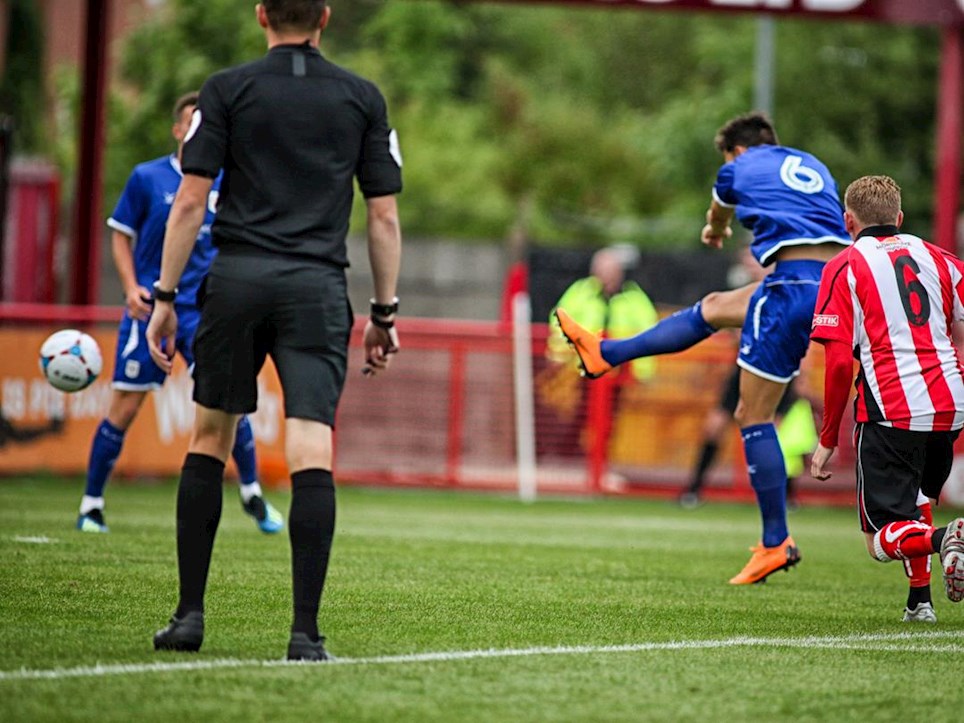 Results do not count too much in pre-season but performances do and Crewe Alexandra certainly stepped up a level in defeating Altrincham 3-0 this evening.

Crewe set a high tempo early on and finely taken goals from Perry Ng, Jordan Bowery and Ryan Wintle saw us race into a 3-0 lead before 20 minutes had elapsed.

The first goal arrived in the 5th minute after Charlie Kirk has applied enough pressure to force a cheap corner from our former Academy defender Andy White. Pickering took it from the left hand side and after the ball fell invitingly to Ng, he showed great technique to get it over it and dispatch it past Tony Thompson for the opener.

Crewe continued to play some fantastic two-touch football and Altrincham found it difficult to live with the tempo we had quite clearly set. Crewe moved the ball freely and with real intent to get in behind and on more than one occasion we just needed to collect the final ball to be in on goal. Bowery and Nicholls worked tirelessly to chase down the defenders and not allow them out. The high press was perfected in the opening passages of play and we controlled the majority of the possession because of it.

The sharpness was evident and it was no surprise that a second goal arrived after just 13 minutes. Eddie Nolan stepped out of defence to intercept and set us on another attack. Kirk, who was once again lively on the night, provided the overlapping Pickering with an inviting pass and his cross found the head of Bowery.

The Altrincham keeper was a bit unfortunate that after getting a strong hand on it, he couldn’t quite keep it out and it looped into the net.

Minutes later, Kirk was involved again and his cross was headed goalwards by Paul Green and the diving Thompson may have got the slightest of touches to push it against the crossbar and Nicholls couldn’t quite reach the rebound before it was cleared.

The third goal arrived inside 20 minutes, with Kirk again providing a tantalising low cross across the box that Wintle gleefully guided home for 3-0 form close range. It was a wonderfully crafted goal and Wintle showed a real willingness to break in to the box to take full advantage.

Altrincham’s winger John Johnston was the biggest threat to the Crewe defence. He forced a corner off of Nolan and had another curling effort deflected wide of the target. Altrincham’s best chance of the half fell to the advanced Liam Goulding after he connect with a deep cross. He must have thought he had scored with his side foot, only to see Pickering get back to clear it from the line. It was a wonderful goal saving clearance.

Jordan Hulme also had a header flick off the head of Nolan but Richards watched it superbly well to push the deflection away from danger. It was a fine, reflex save from the Welsh stopper.

Crewe nearly made it 4-0 before the break but Thompson did well to deny Bowery and then doubly from Kirk before Nicholls shot inches wide of the far post.  It just wouldn’t go in on that occasion.

David Artell made a double change at the interval with Ben Garratt and Chris Porter replacing Richards and Bowery.

The tempo was not as high as the beginning of the first half and it was Altrincham forcing the first meaningful save of the second period. Garratt had to be alert and agile enough to turn an effort from Altrincham substitute Tom Peers on the crossbar.

Crewe had to defend a lot more crosses entering our box and it was proving more of a defensive workout in the second 45 minutes.

Porter went close to netting his first pre-season goal will a well met header before Ainley and Finney replaced the excellent Kirk and Lowery. Ainley went close after racing onto a chance in the right channel but under severe pressure, he could only shoot wide of the mark.

With the minutes ticking away, Ng’s fiercely driven free-kick was certainly goal bound and the venom of it knocked Peers off his feet. Thankfully, he was able to shake it off and continue.

In search of a late fourth goal, Ainley tried to catch out Thompson with a lob from distance but the Altrincham goalkeeper watched it well enough.

Kick-off at Moss Lane is at 7:45pm against the National League North side.

Click here to find out more about the Open Day.