Crewe Alexandra head to Oldham Athletic looking to continue a run of fine form that sees them unbeaten in six games including the last three on the road.

Following on from last weekend's thriller at Macclesfield & the victory at home to Carlisle in midweek, Dave Artell's troops are all-set for the trip to the Latics.

It won't be an easy game though, with new Oldham Manager Paul Scholes set to take charge of his second match after a resounding 4-1 victory over Yeovil on Tuesday night.

The Latics currently sit two places higher than Crewe in the League Two table in 11th, though this is only on goal difference, with both sides & Tranmere too all on 45 points.

Crewe: The Alex have no fresh injury concerns ahead of the trip to Boundary Park, with James Jones still sidelined.

Perry Ng is ok to play having completed 90 minutes against Carlisle despite receiving a double kick-to-the-head from two Cumbrians players on Tuesday night.

The Alex are currently on their best away form of the season having won one and drawn two of the last three.

Oldham: The Latics have won their last two games, scoring seven goals in the process, with a 4-1 win over Yeovil & 3-0 sucess at Crawley. But previous to that, it was three straight defeats - all 2-1 - in league & cup.

The hosts have been bouyed by the recent arrival at Manchester United legend and Oldham fan Paul Scholes, and it will be down to Crewe to spoil the party at Boundary Park. 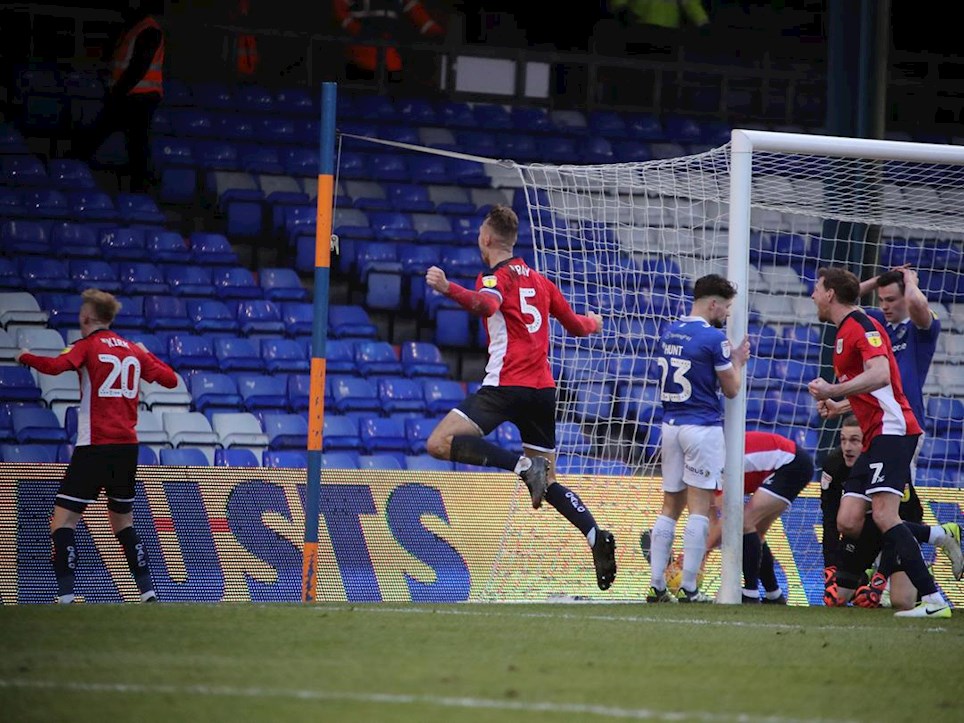 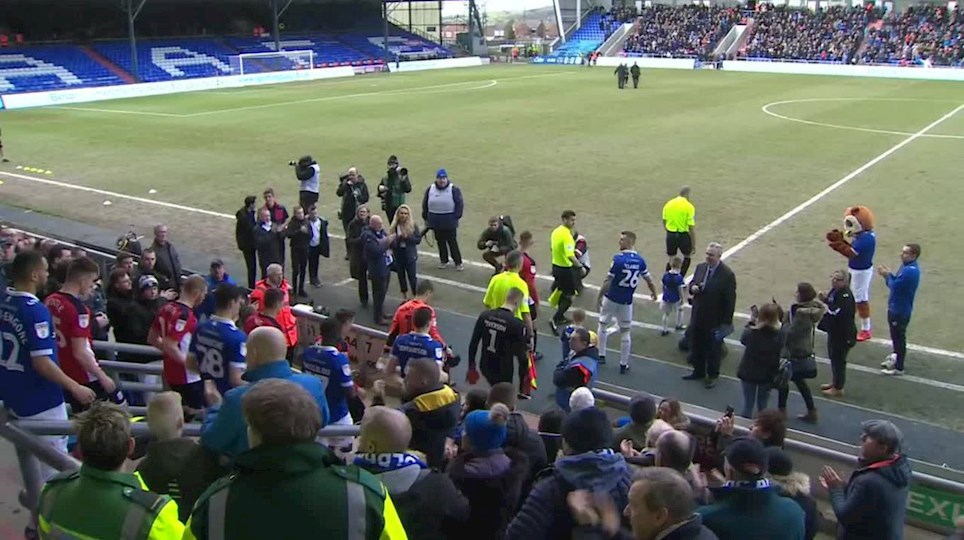 Crewe Alexandra once again staged a dramatic late comeback to grab a point from Boundary Park. Following on from his late goal at Moss Rose, skipper George Ray did it once again, this time hooking home a superb cross from sub Tom Lowery deep into stoppage time.

This Crewe side do not know when it is beaten at the moment and have now lost one in ten games. It was another dig in job by Artell’s boys and keeps our play-off hopes alive. The spirit is there and growing…

In a contest void of genuine chances, Oldham’s goal arrived on 23 minutes when the lively Callum Lang raced onto a long clearance and lobbed the ball over an advanced Ben Garratt.

Crewe’s chances of an equaliser came in the first half with Paul Green forcing Daniel Iversen into a save before he squeezed our best chance of the entire 90 plus minutes wide of the post after Chris Porter had got a touch to a left wing cross. Green couldn’t quite direct it on target.

With just the one goal in it for such a long period of time, the Railwaymen were very much in the game but we didn’t conjure up too many chances until Lowery’s deep cross found his captain and he steered it in in the 93rd minute! It was another late, late show from the Railwaymen.

David Artell had the luxury of naming an unchanged side for the fourth game running for the trip to Boundary Park.  Chris Porter and Paul Green lined up against their former club this afternoon.

With only midfielder James Jones missing through injury, the Alex boss had virtually a fully fit squad to choose from and that meant no place on the bench for veteran defender Nicky Hunt. Alex Nicholls travelled to play for the club’s Under-23s at Birmingham where a young side obtained a very creditable goalless draw.

There was plenty of intrigue and interest in the host side as their new manager, Paul Scholes, took charge of his first home game on a Saturday afternoon at Boundary Park. His Oldham side had comfortably defeated Yeovil Town 4-1 in his first game in charge on Tuesday evening.

It was a rather slow start to the proceedings as both sides tried to gauge what the other was doing in terms of shape - but it was evident that both wanted to play the right way.

Crewe did force two early free-kicks in fairly promising positions but nothing came of them as they were placed inside a crowded Oldham penalty area.

Captain George Ray was called upon to make a forceful challenge on Jose Baxter close to the halfway line as the former Everton man threatened to break clear. Ray did well to find his balance and do enough to make sure the ball rebounded off the Oldham midfielder and back into safety of our own half.

Oldham’s first real threat came after 11 minutes when a searching cross from Johan Branger-Engone had to be turned behind by Harry Pickering. Green cleared the corner.

Moments later, Ben Garratt had to watch a good effort from Baxter as he half volleyed an effort goalwards from outside the box. It was a straight forward gather for the Crewe goalkeeper. Oldham continued to try and make inroads into our half of the pitch but Crewe were fairly comfortable in their defending.

On 20 minutes, some persistence play from Callum Ainley allowed the ball to break invitingly for Paul Green but he couldn’t keep his shot down and sent it harmlessly over the crossbar.

Ray was then booked for a foul on the influential Baxter as he played a quick one-two around the Crewe skipper. From the resultant free-kick, Garratt made a save from Baxter’s curler that was destined to the top left hand corner.

At the other end, a Pickering free-kick was headed into the air by Porter and easily collected by goalkeeper Daniel Iversen. A quick break saw the Oldham goalkeeper clear long up field and Callum Lang raced onto it and cleverly lift his controlled lob over the advancing Garratt for the opening goal on 23 minutes. It was so straightforward in unlocking what had been a determined and stringent Crewe defence. Garratt’s advancement had made up the striker’s mind.

Crewe continued to keep possession fairly well and we managed to conjure up our best chance just after the half an hour mark. The ball was shielded really well by Bowery on the edge of the box and he had he awareness to find Green in space. The former Oldham man fired too close to the grounded Oldham goalkeeper Iversen who was able to push it away from danger.

Another chance soon fell to Green though after Porter had tried to pull down a cross from the left provided by Pickering. The Alex striker couldn’t quite get it under his spell but it dropped to the supporting Green. Under pressure from Christopher Missilou inside the six-yard box, he could only poke his effort inches wide of the post. It was another good chance for the Railwaymen and Green will be disappointed not to have got it at least on target.

As the first half drew to a close, Pickering became the second Crewe player to be cautioned after he was penalised for a foul as Oldham broke away. Nothing came of the attack and the referee, Graham Sailsbury, allowed play to continue before calling him over to be booked.

There was still time for Crewe to make a free kick count after Porter was tripped in the build-up. Pickering’s effort was tamely straight at the Oldham wall.

A late break from the home side then saw Zak Dearnley rob Perry Ng of possession in stoppage time and his eventual cross found Branger-Engone but his shot was blocked by the well placed Nolan.

The second half started in much the same vein as the first. The tempo was measured with both sides not prepared to commit too many bodies forward. It was an intriguing, chess-like contest with the back lines of both teams not exactly stretched. There was still some promising build up play from both sides but the game was lacking that quality final ball.

On 52 minutes, David Artell made his first change with Tom Lowery replacing Ainley. Seconds after coming on, Lowery was a simple bystander as George Edmundson headed a corner straight into the gloves of Garratt.

In response, Kirk tried to pick out Porter twice but his crosses were headed clear by Clarke and Edmundson. It was better from Crewe.

Oldham were also forced into a change with the hard working Lang replaced by Chris O’Grady.

More good pressure from Crewe then saw Ryan Wintle unleash a shot from 25 yards but it was blocked by the back of an Oldham defender and their backline did well to deal with the danger and nod it back to Iversen.

Scholes’ second change saw Baxter make way for Mo Sylla. Baxter had arguably been the best performer in the first half especially.

On 66 minutes and in search of more creativity, Artell introduced Aaron Taylor-Sinclair for his debut. The on-loan Motherwell defender replaced Pickering at left-back.

Chances were few and far between in the second period with neither goalkeeper called into serious occasions on too many occasions.

With the minutes ticking away, and the anxiety growing amongst the Oldham fans, Lowery hit the first man from a well-placed free-kick and then we didn’t make a resultant corner count.

Paul Green did have the ball in the Oldham net in the final minute but in fairness the assistant referee already had his flag up for offside against Porter.

Crewe’s late pressure finally paid off, deep into stoppage time when Lowery’s excellent cross found his skipper and he hooked it home from close range to salvage a great away point This team do not know when it’s beaten!

Match tickets are on sale from Crewe Alex until 3pm on Friday 15 February. Subject to availability.

Official coach travel is also available to purchase online (£12/£13) - departing from the Alexandra Stadium at 11:30pm.

Tickets will be on sale until 3:00pm on Friday 15 February, subject to availability.

Official coaches depart from Gresty Road at 11:30pm and are priced at:

Click here to check out the Oldham guide on https://www.awaygames.co.uk