The Alex are hoping to continue the upward momentum towards the play-off places when Exeter City come to town this weekend.

The Grecians too are right in the mix currently sitting in eighth in the League Two table, five points above Crewe with a game in hand.

The Alex are looking for a SIXTH straight home victory with a run that started on Boxing Day against table-toppers Lincoln City.

With the away form improving too, Crewe are unbeaten in seven straight games at present, but that has only helped them catch up with the pack. More of the same is now needed if a real promotion push is to materialise, with the Exeter fixture now taking added importance.

City are on decent away form themselves, winning two, drawing one & losing one of their last four on the road - so Dave Artell's troops will have to be on their game to aquire the desired result.

Crewe will hope to avenge the 1-0 defeat to Exeter earlier in the season when a spectacular Lee Martin strike from distance gave the Grecians the points on a damp day at St James Park.

Crewe: James Jones is once again thought to be the only abentee, though he has now returned to light training.

Loanees Aaron Taylor-Sinclair & Jamie Sterry on knocking on the door for a starting place, but Manager David Artell may keep  faith with the same XI for a fifth straight game after winning two & drawing two of the last four.

Exeter: Their hero from the game earlier in the season, Lee Martin, will be missing from the match with a calf injury. Jonathan Forte is a doubt with a knee problem, whilst Hiram Boateng is thought not to be risked despite returning to training. 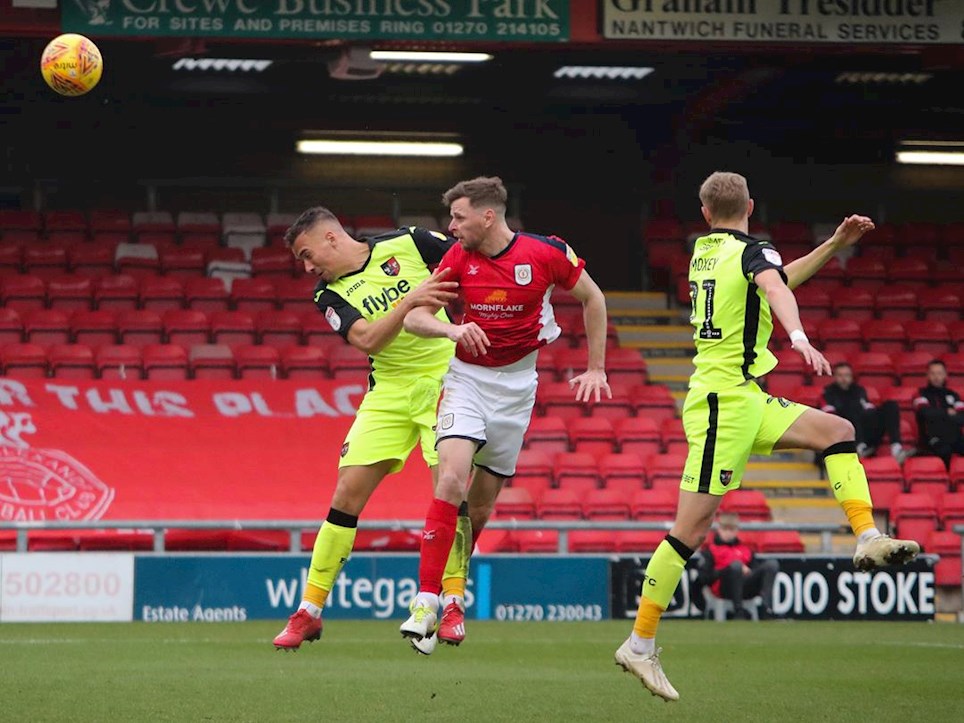 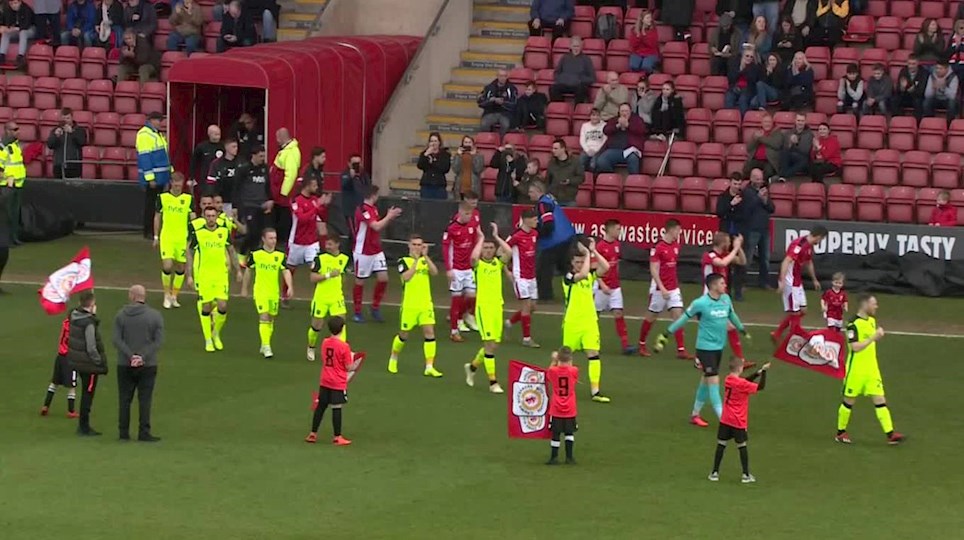 Crewe Alexandra’s unbeaten run came to an end as a well drilled and experienced Exeter City ran out 2-1 winners at Alexandra thanks to goals in each half from Jake Taylor and Matt Jay. Crewe had drawn themselves level just three minutes into the second half when Chris Porter headed home a superb cross from Charlie Kirk.

After Jay had put Exeter back into the lead on 66 minutes, Crewe huffed and puffed but couldn’t find another equaliser and keep our run mini-run going. The Alex had gone seven games without defeat and were looking for our sixth successive home win.

Exeter with their eye on a play-off place inflicted a league double on the Railwaymen after previously winning 1-0 at St James’ Park in Decemeber.

Crewe Alexandra boss David Artell named an unchanged team for the visit of Matt Taylor’s Exeter City side.  The Alex boss had the luxury of naming the same eighteen that drew away at Oldham Athletic last weekend.

Midfielder James Jones has made a return to light training but is not ready to be considered yet.

The game at Gresty Road kicked off in bright sunshine in Cheshire and both teams quickly got the ball down and play the right way.  It was Crewe though dominating the possession and controlling the early exchanges. After a vibrant start, an early cross from Perry Ng was headed wide by Chris Porter.

With Crewe looking confident in possession it was somewhat against the run of play that the visitors took the lead on just seven minutes. Exeter pressed down our right hand side to force a corner. Matt Jay’s longer cross dropped to their captain Jake Taylor and his low shot seemed to take a wicked deflection off a Crewe body to take it past Ben Garratt for the opener. It was a soft goal to concede.

Exeter were a threat from corners and another one from Lee Holmes had to be dealt with at the second attempt as Randell Williams tried to take advantage at the far post.

Crewe’s first major threat came on 19 minutes. Callum Ainley and Ng combined to find Porter and his little lay off, allowed the supportive Paul Green to hit a half volley side of Christy Pym’s right hand post.

Five minutes later, more good approach play from Ng found Bowery and his wicked low cross was jumped on by an alert Pym.  Crewe’s crossing at times though was not good enough and we hit the first man on too many occasions.

Exeter enjoyed their best spell came just before the half an hour mark and could have made it 2-0. A deep cross from Pierre Sweeney  reached the impressive Randell Wiliams and his volley was superbly saved by Garratt.

Crewe were pinned back into their own half for a spell and some sloppiness in defence saw Jay feed Ryan Bowman and he was a touch unlucky as he tried to place his shot in the far corner. It bounced just wide. Taylor also side-footed wide after he ran on to a good pass from Williams on the edge of the Crewe penalty area.

Dean Moxey and Dara O’Shea were assured at the back, and Crewe were finding it hard to conjure up too many genuine chances.  Our final ball was lacking but Ng swung over two tempting crosses that could have caused more issues in the Exeter box more than did do.

Crewe’s best chance arrived on 39 minutes. Garratt’s long clearance up the pitch, was flicked on by Porter and dropped really invitingly for Kirk but he hesitated in getting his shot off and Sweeney was able to recover and apply an excellent block.

There was still time for Ng to provide another dangerous cross and after Bowery had won his flick on, the incoming Green threw himself at it but couldn’t keep his follow up header down enough.

Crewe came out second half chasing a goal and after a couple of early cross from Pickering, the Alex levelled just after the interval. Charlie Kirk sent over a fantastic cross to the far post and Porter rose to head home the equaliser. It was his 11th goal of the season and Crewe were very much in the contest again. It certainly lifted the crowd.

But Exeter had dangerous players and after a superb deep cross from Holmes, Randell Williams smacked the post with a really good effort. It was a great effort and a let off for the Alex

Strangely it was Williams’ last contribution as he was subbed for Craig Woodman soon after.

Exeter continued to ask question and Bowman flicked a Holmes cross into the gloves of Garratt before a break from Kirk was cut out just before it reached Porter.

The decisive goal came on 66 minutes and it was preventable as Holmes came out of the corner with the help of Kane and the ball was played to Jay on the edge of the box and after he create a yard of space up against a recovering Green, the tricky Exeter wide man bend it past Garratt.

That goal prompted an instant change with Dale replacing Bowery.

Exeter stayed solid and in their shape and made things difficult for us to break the down.

Dale injected some pace after about five minutes of finding his feet and his cross found Ng but he slipped at a crucial moment.  After zipped in pass from Dale nearly found Nolan.

Crewe huffed and puffed but in truth that real chance never arrived even when Miller was introduced for Kirk.

It was that final ball and quality lacking and Pickering over hit a cross in a fine position before Dale drilled one into the goalkeeper as Crewe ran out of time.

Crewe Alexandra welcome Exeter City to Gresty Road in what has now become a crucial clash in the hunt for a Sky Bet League Two play-off place.

The Alex's recent form of five straight home wins & 21 points taken from 30 available have propelled the team up the league table & in with a chance of making the end-of-season equation.

The Grecians, who have been in and around the mix all season, currently sit just outside the play-off positons in eighth, five points better off than Crewe & with a game in hand.

Should the Alex win on Saturday, anything is possible for the run-in with the gap to Exeter narrowed to two points, but if the away side walk away with the spoils, an eight point deficit will be hard to make up with just 12 games remaining.

The match takes place on Saturday 23 February at the Alexandra Stadium with a 3pm kick-off & the team need your backing to keep the run going!