Crewe Alexandra have a brief respite from Sky Bet League Two action this evening when they host League One outfit Fleetwood Town in the first round of the Carabao Cup.

The Alex lost out at Gresty Road at the first round stage last season to Bolton Wanderers. Chris Porter had Crewe ahead, but two goals in the final 20 minutes from the Trotters capped a 2-1 away victory.

Extra time has been abolished from the Carabao Cup for 2018/19. If the match ends in a draw after 90 minutes this evening, the game will go straight to penalties.

Crewe: Dave Artell has been boosted by the news that Shaun Miller has returned to training in time for the meeting with the Cod Army. However, Chris Porter & George Ray are unlikely to be risked after missing the trip to Newport with injury.

As mentioned above, Crewe's participation in the Carabao Cup ended at the first round stage last season, but victory was tasted at this stage in 2016/17. Crewe went to Sheffield United & won 2-1 after extra time thanks to a brace from Ryan Lowe - the equaliser to take the game to an extra half an hour coming in the 89th minute.

Fleetwood: The Sky Bet League One side come to Crewe having picked up their first victory under new Manager Joey Barton on Saturday. That 2-0 success away at Oxford United came after a 1-0 home defeat on the opening day to AFC Wimbledon.

The Cod Army also lost out in the first round of last year's competition. Then of Carlisle United, striker Shaun Miller was on the score sheet for the Cumbrians as they won 2-1 after extra time in Fleetwood.

The match IS NOT available on iFollow for live streaming overseas. 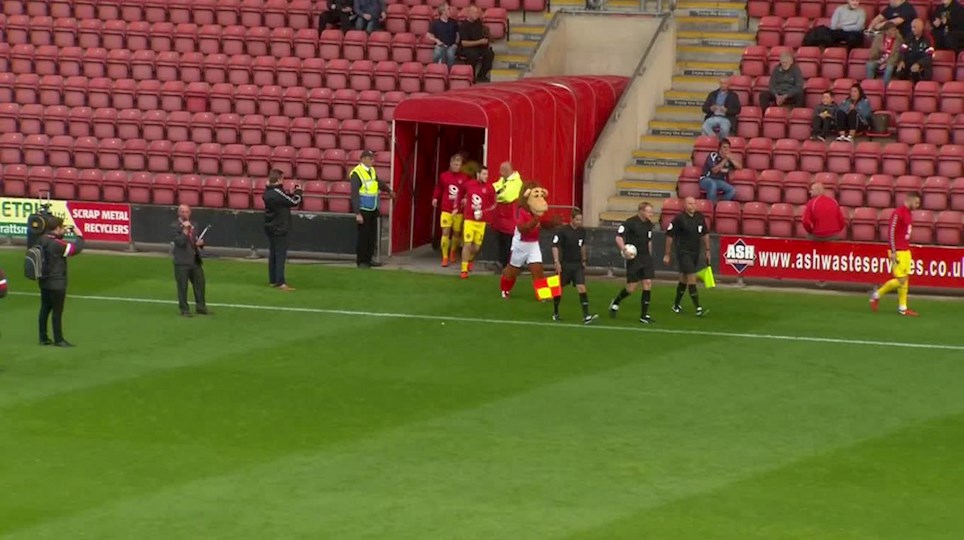 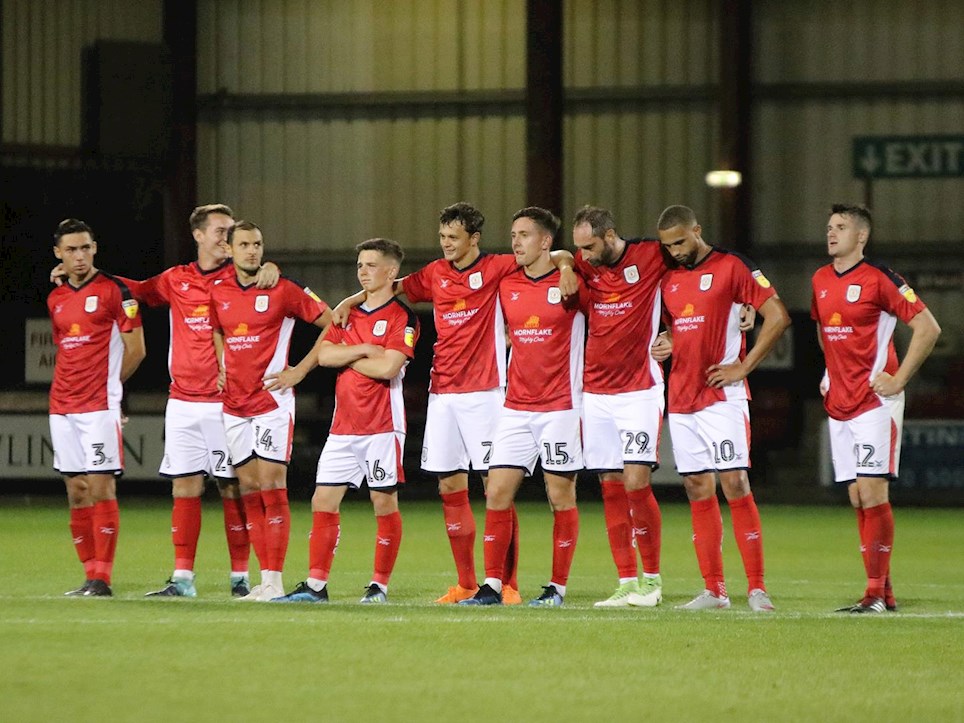 Crewe Alexandra suffered penalty heartache again this evening after our first round Carabao Cup tie against Fleetwood Town had to be decided on spot kicks following a 1-1 draw. James Jones and Perry Ng missed their penalties for Crewe with Alex Cairns making a fantastic save to deny Ng’s decisive fifth penalty for us.

Although David Richards made a fine stop himself to deny Harrison Biggins, the Fleetwood substitute Ashley Hunter kept his composure to roll the winning penalty past the Crewe Alexandra goalkeeper to put Fleetwood in the hat for the round two for their first time in their history.

Crewe had taken the lead in the first half thanks to a well taken finish from Ryan Wintle but the League One side hit back early in the second half through substitute Jason Holt.

David Artell made one change from the side that narrowly lost 1-0 to Newport County on Saturday. Midfielder Paul Green was rested after picking up a slight calf strain thus allowing Callum Ainley to make his first start of the season following his two substitute appearances.

In Green’s absence, youngster Josh Lundstram was named in the eighteen-man squad. James Jones captained the side with Green and defender George Ray missing.

Fleetwood Town boss Joey Barton used his squad numbers to make eight changes for his first venture as a manager in cup competitions.

Crewe had an early scare when the Fleetwood captain Paddy Madden headed just wide of David Richards’ post after just two minutes of play. The visitors’ continued to have the better of the chances in the early exchanges and the lively Wes Burns should really have hit the target and ask a question of Richards when he was played in down the Crewe left hand side.

The Railwaymen did settle into the game and conjured up some half chances of our own. The recalled Ainley combined well with Jordan Bowery but the striker couldn’t keep his effort down enough to trouble Alex Cairns in the Fleetwood goal.

A purposeful run across the pitch from Charlie Kirk saw him find Alex Nicholls with a low pass but his snap shot was blocked. Another tempting cross from Kirk was just too high for the head of Bowery.

Fleetwood’s Conor McAleny must have thought he had given the away side the lead when he got in again down the left hand side but his cross shot thumped the Crewe post and Madden was unable to keep the loose ball down. It was an almighty let off for the Alex.

On the half an hour mark there was a controversial moment when Nathan Sheron smashed into James Jones. He acknowledged that it was a bad challenge and referee Trevor Kettle was arguably lenient in only showing him a yellow card rather than the red one that the Crewe fans felt warranted the incident. The reaction of the players said it all. On another day he could well have been dismissed.

Just two minutes later, Crewe took the lead following a well worked corner. From the short one, Kirk was again the provider and he found Wintle inside a fairly crowded penalty area. The midfielder took it down superbly with a deft touch and he showed great composure to fire on the volley past Cairns for his first goal of the season.

Ainley demonstrated some great feet to  drift past a succession of tackles and his visionary through ball nearly found the run of Bowery. Ainley’s touches and skill with the football drew warm applause from the supporters.

The dangerous Burns fired wide of the target again for Barton’s side before Crewe were presented with a late opportunity from a free-kick. Harry Pickering struck it well enough but it was just wide of the top corner.

Fleetwood made a change at the interval with the booked Sheron making way for Jason Holt and it didn’t take the substitute too long to make his mark. Crewe failed to clear the danger following a cross from Gethin Jones and when it fell to Holt he made no mistake with a low drive to level things up.

As was to be expected Fleetwood approached the second half with extra vigour and they certainly enjoyed the lions’ share of the possession.

They introduced the fresh legs of Hunter for McAleny before Madden headed wide of the mark as they looked to go in front.

To their credit, Crewe kept plugging away and following a clear, quick  short corner from Pickering, Ainley fired over with venom.

Crewe had to stand firm at times with Wintle impressive in his defending. Nolan also did exceedingly well to cut out a cross from Burns, who was a handful on the night.

Tom Lowery was introduced late on for Kirk and Lewis Reilly was introduced with penalties in mind for Ainley. Lowery headed over the top of the crossbar and Wintle fired over once again after good work by Lowery close to the by line.

A penalty shoot-out was so nearly avoided after Hunter produced a moment of sublime skill to drift into the Crewe box and his low drive was inches wide of the far post. There was also a shout for Holt being onside when he tucked home a close range effort. The assistant referee raised his flag to rule a possible late winner.

Crewe’s last hope to win the tie in normal time saw a late free-kick drop to Perry Ng but he was quickly crowded out and couldn’t get a shot off.

The tie had to be decided by penalties. Jones stepped up first and drove up against the crossbar. Madden slotted his home in the centre of the goal to put the visitors ahead. Nicholls and Reilly then scored for Crewe and Chris Long and Holt for the visitors. Richards was close to Holt’s effort.

Pickering thumped his spot kick into the top corner to keep our hopes alive at 3-3 and then Richards produced a strong hand to keep out Biggins’ effort. Ng then had the chance to put Crewe in front for the first time in the shoot-out but his firm drive was superbly pushed on to the woodwork by the diving Cairns.

Richards couldn’t keep out Hunter’s calm effort and it was Fleetwood in the hat for the second round.

Tickets for Crewe Alexandra's home Carabao Cup First Round tie with Fleetwood are on sale now.

Tickets are available online at www.eticketing.co.uk/crewealex and in-store, with the print-at-home ticket function available upon online purchase.

Season Ticket Holders have until 5pm on Monday 13 August to keep their current seat.

Members who purchase can have their ticket added to their membership card or receive a paper ticket.

Casual supporters will receive a paper ticket as normal.

Crewe Alexandra encourage all supporters to purchase in advance where possible. Delays are possible at the ticket office on match day - purchase early online to avoid problems.

Click here to visit the online box office. Call 01270 252610 to book over the phone or visit the Club Shop at Gresty Road. 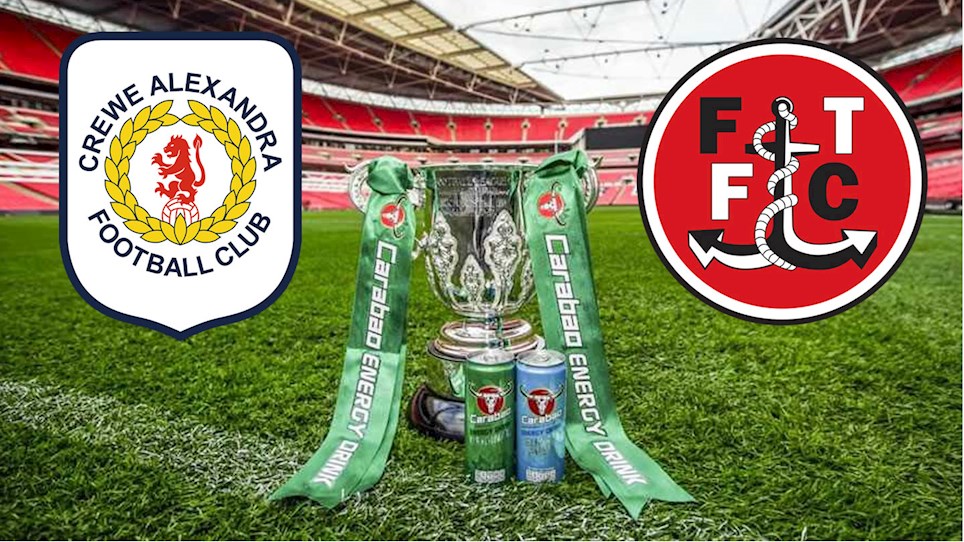