Crewe Alexandra take on Yeovil Town on Good Friday in the first instalment of the the Bank Holiday Easter Weekend Double Header - with a trip to Swindon Town on Monday's the next contest.

Yeovil, like Notts County last week, are in dire straights in the League Two table & are desperate for three points. They currently occupy the second relegation spot & are two points behind Macclesfield Town in 22nd with four games to play.

The Glovers did at least halt their five game losing run with a draw at Swindon two weeks ago, only to lose a crucial clash 1-0 at home to Crawley Town last weekend.

Yeovil have lost 12 of their last 15 games and visit an Alex side who have been very strong on their own patch this season.

It's set to be a scorcher this weekend, so why not start it off in the best possible way and back the boys at Gresty Road!

Crewe: Aaron Taylor-Sinclair & Owen Dale are doubts having picked up respective thigh & back problems, whilst Harry Pickering is definitely absent as he continues his recovery from injury.

Jordan Bowery & George Ray could be in contention for a return to the squad after sitting out of last weekend's victory and playing for the Under 23s at Colchester on Monday.

David Artell could be set to blood some of the youngsters in the final four games, with Lewis Reilly & Billy Sass-Davies recalled from their respective non-league loans.

Yeovil Town: Josh Grant remains out with an achillies problem, whilst Francois Zoko looks set to return to the squad having missed out in recent weeks.

Omar Sowumni has returned to training & will be availalbe, as will Alex Pattison. Though Rhys Browne is still a doubt with a return on Monday for him looking more likely.

Time is running out for The Glovers who need to arrest their alarming slump in form in 2019 in they are to avoid relegation into the National League. 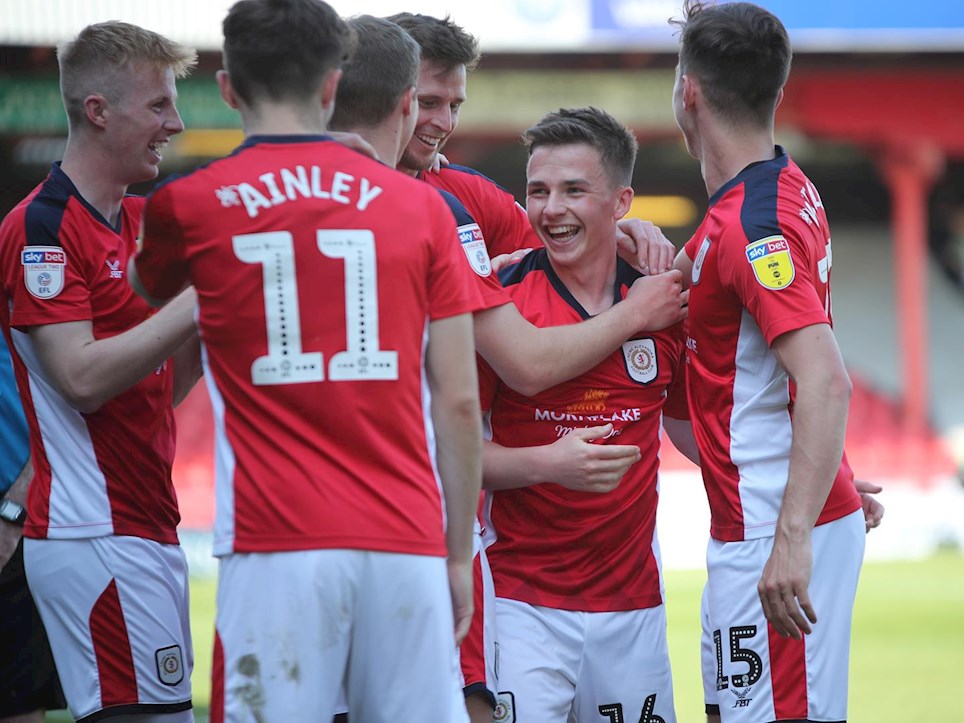 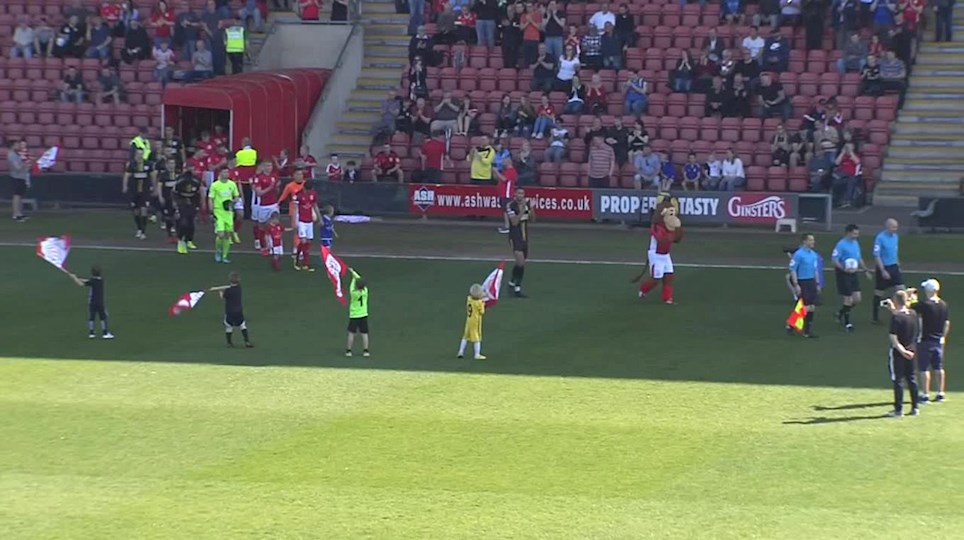 A ninth goal of the season from Charlie Kirk and a first ever goal from Tom Lowery gave Crewe Alexandra a 14th home game of the campaign. Crewe recorded back-to-back home wins after seeing off Yeovil 2-0 much in the same way we did to Notts County last weekend.

It was no more than Crewe deserved as well after another fairly comfortable afternoon that was made even more comfortable with the red card to Adel Gafaiti for an off-the-ball incident on Nicky Hunt on 57 minutes. The Algerian kicked Hunt off the ball inside a crowded box and referee Eddie Ilderton did not hesitate in showing him the red card.

Crewe could and should have scored more with Kirk have a second goal for himself chalked off for offside when he wasn’t. Substitutes Owen Dale and Ollie Finney also went close to adding to the 2-0 score line.

David Artell made three changes to the side that won so convincingly against Notts County last weekend. Young goalkeeper Will Jaaskelainen was handed his senior debut after numerous successful loan spells, most notably at neighbouring Nantwich. Centre-half Billy Sass-Davies started his first league game. The Welsh Junior International had previously started a Checkatrade Trophy game against Newcastle United U-23s last season. With Aaron Taylor-Sinclair ruled out with a thigh injury, the versatile Nicky Hunt switched to left-back.

The other change saw James Jones recalled after his goal last weekend. Paul Green was rested and began on the substitutes’ bench. There was a recall on the bench for forward Jordan Bowery.

A confident start from Crewe saw us make a dream start after a terrible mix-up in the Yeovil back-line. Neither centre-half Bevis Mugabi and Omar Sowunmi took the initiative to clear the ball in the fourth minute and that allowed an alert Callum Ainley to nick possession from the Yeovil captain and he quickly fed Kirk on the left. The winger took the ball in his stride and shaped up to guide it into the bottom corner for his 9th goal of the season. It was another fine finish from the in-form winger.

The visitors tried to hit back and Nolan did ever so to deflect a header from the towering Sowunmi behind for a corner. Alex Dobre also tried his luck with an ambitious overhead kick that was easily collected by debutant Jaaskelainen.

Ainley and Kirk continued to torment the Yeovil back four and a wonderful piece of skill from Ainley saw him trick his way along the by-line and his pull back so nearly found Lowery. A quick free kick from Wintle nearly saw him pick out a run by Porter but Sowunmi reacted well to clear. From the short corner, Kirk found Lowery in a load of space but his drilled shot was blocked.

Yeovil had struggled to get a grip of possession in the final third of the pitch but as the half drifted on, the more they came into it. Tom James had three opportunities from free-kick. One was blocked by the bravery of Kirk and two sailed over the crossbar.

More persistent from Lowery down the left hand side saw him found Kirk and after he had cut back, his curling shot aimed for the far corner was well held by Nathan Baxter. Any spillage could have resulted in a simple tap in.

Yeovil try to test Jaaskelainen from distance but he was equal to long range efforts from Mugabi and he did well up again Alex Fisher after he jumped with him from what looked like an offside position.

Yeovil finished the first half with a lot more of the possession but Crewe stood firm and the half ended with a couple of stoppages for Nolan and Fisher.

The second half started with a promising break from Lowery and he had every right to shoot from a good position instead of looking for a pull back.

Crewe had a second goal wrongly chalked off for offside when Kirk stole in at far post for a tap-in. The Yeovil players raced over to the assistant referee and the next minute he raised his flag. Kirk looked to have timed his run to perfection to get on the end of Perry Ng’s cross.

That would have given us the cushion of a second goal and Ryan Seager was a threat when finding pockets of space. He had two shots deflected wide and Jaaskelainen produced a stunning tip over to deny him on his debut. It was his stand out save. Billy Sass-Davies also made a superb challenge to deny Tristan Abrahams a clean shot at goal.

Yeovil’s afternoon was made even more difficult when Gafaiti’s rush of blood saw him red carded for kicking out at Hunt. It was off the ball but seen by the referee and the Glovers now had to see out the remaining 30 minutes with ten men.

Crewe were in control anyway and the extra man made it easier for us to keep the ball and after a double substitution saw Finney and Dale replace the excellent Ainley and Jones.

The second goal duly came on 65 minutes and Kirk was instrumental again. He pulled a cross field cross out of the sky and played a tempting ball across the six yard. Porter should have tucked it home but the ball reached Lowery and he helped himself to his first senior goal. It was turning into an afternoon of firsts all round.

Dale had an early good effort flash wide after a purposeful run. Finney did the same soon after and both players would have been disappointed not to have hit the target.

Bowery replaced Porter with 15minutes left and Zoko came on for Abrahams but Yeovil struggled to conjure up any more real chances to get a passage back in the game. Crewe played keep ball in the closing stages and were enjoying the freedom of the game won and Dale and Perry Ng went close again to adding to the tally and really we should have scored more of the two than we did.